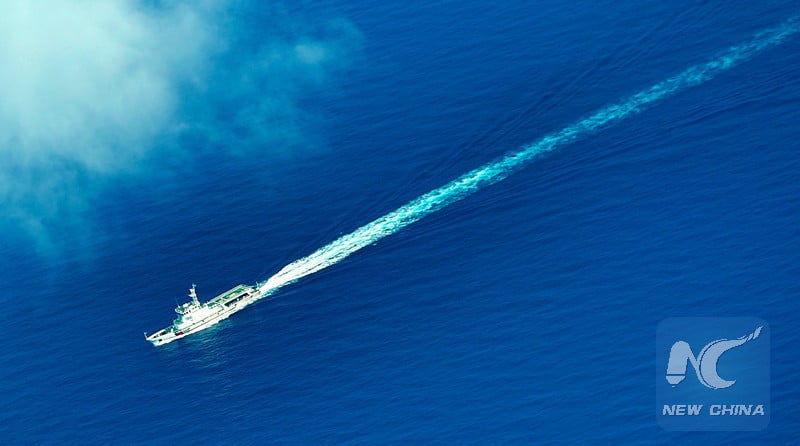 An aerial photo taken on Sept. 25, 2015 from a seaplane of Hainan Maritime Safety Administration shows cruise vessel Haixun 1103 heading to the Yacheng 13-1 drilling rig during a patrol in South China Sea. Xinhua Photo

China has made clear that it refuses to accept an international arbitration panel’s ruling against its territorial claims in the South China Sea, but whether that stance leads to increased military tensions between Beijing and the United States or opens the door for broader negotiations is an open question.

Vice Adm. Yoji Koda, a retired commander-in-chief of Japan’s Self-Defense Fleet, said in answer to a question that Tuesday’s decision by the Permanent Court of Arbitration on the U.N. Convention of the Law of the Sea, presents Washington and Tokyo with a “fait accompli.”

Militarily, he told an audience at the Center for the Strategic and International Studies, a Washington, D.C., think-tank, if Beijing goes ahead with building up Scarborough Shoal, it “could be a game changer.”

What he was referring to at the Wednesday event was the creation of a triangle of military facilities on artificial islands allowing China to project power to its claimed “nine-dash line,” from its coastal mainland.

“I’m not saying go to war today,” but “you have to be prepared.”

The panel has no enforcement powers.

Julia Xue, senior fellow in the international law program at the Royal Institute of International Affairs, viewed the ruling and China’s reaction as “temporarily increasing tensions” in the region, but it also “causes states to think forward.” She mentioned the statement by China’s foreign ministry saying it was open to negotiations, a point made also by the Chinese ambassador to the United States.

China’s view of itself as a maritime power, which began in the 1970s and accelerated over the past five to six years, has been “a seascape change” for its leadership’s thinking about its role in the world. At the same time as it became a rising maritime nation, Beijing has also expanded its economic ties inland with the building of a “new Silk Road” to the West and the creation of an investment bank for Asian nations, she said.

“We have to sit down and discuss” the issues that the ruling raises, Xue said, a process that is “embedded in Asian culture.”

Brian Andrews, principal in the Asia Group, said, there is a misconception that “the United States views [the South China sea dispute] as a zero-sum game. The U.S. is up; China is down.” There is a history of negotiations between the two countries over a number of economic and diplomatic concerns, as well as between other countries in the region over divisive issues. Among the regional talks he cited were: Philippines and Vietnam over territory and mineral exploration and Japan and Korea over “comfort women”—women taken forcibly into prostitution during World War II.

Looking at the United States’ rebalancing to the Asia-Pacific, Koda said it has “not [been] successful in the short term.” As treaty partners, Tokyo and Washington “need to develop new tactics,” particularly in light of the ruling coming from the Hague.

“The U.S. presence is a stabilizing element in the region, from the Indian ocean to the Pacific. The South China Sea sits in the middle” of that area.

Elina Noor, director for foreign policy and security studies at Malaysia’s Institute of Strategic and International Studies, said for the coastal countries in Southeast Asia, particularly, there are questions of sovereignty and territorial integrity when it comes to the South China Sea. “There are also resources” from fisheries to energy that countries such as hers rely on. She added that for Malaysia those waters also divide the country into two parts—the mainland and a large section of Borneo, an island, three hours away from the capital Kuala Lampur.

The East China Sea, although still tense in Japan and China’s long-running dispute over the Senkaku Islands, which Tokyo occupies, is stable, Koda said. He attributed relative quiet to the strong Japanese coast guard presence, being backed up by the Maritime Self-Defense Force and the U.S. Pacific Fleet if need be.

The situation in that potential flashpoint should be “fairly stable for the foreseeable future” of five to seven years.