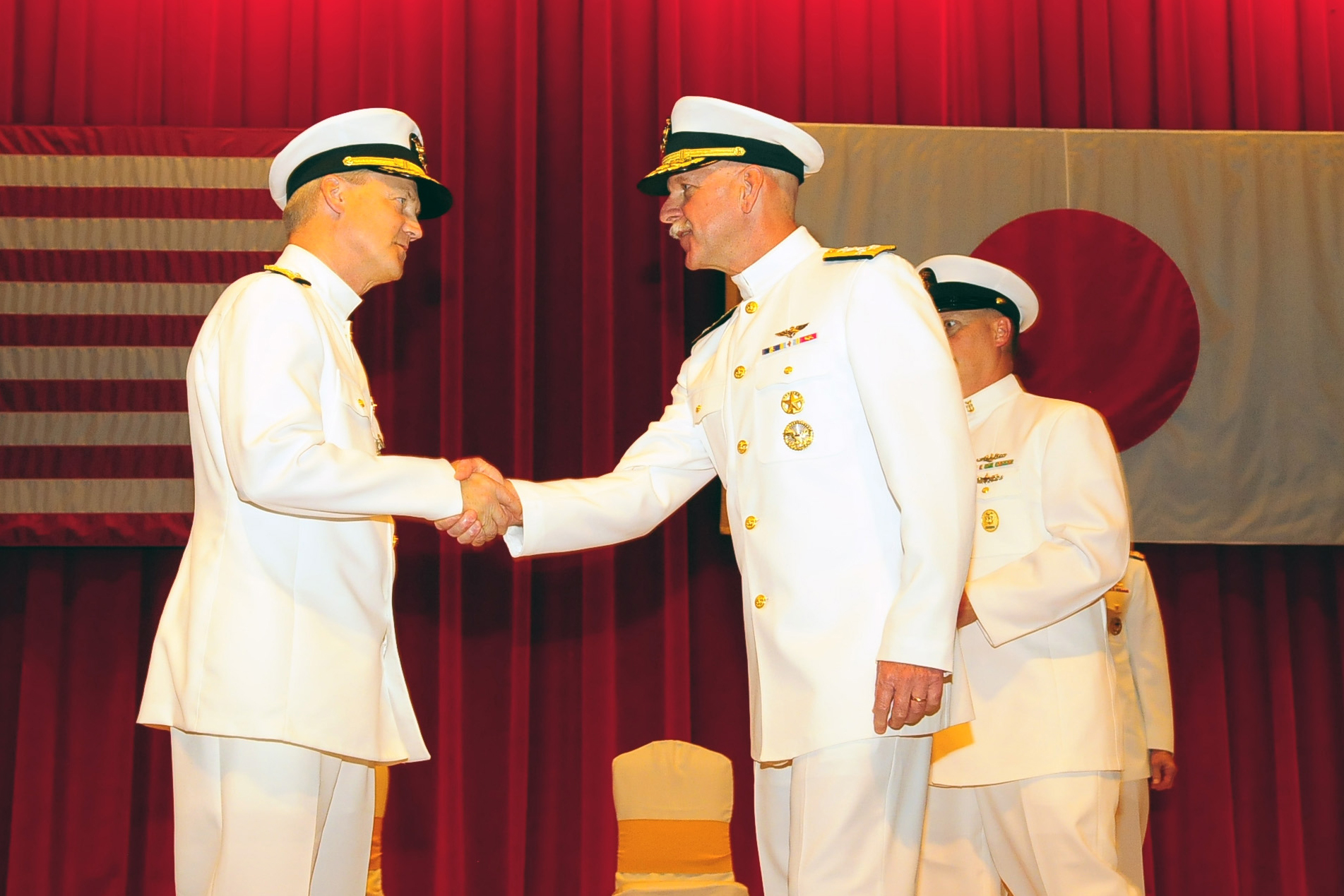 Aucoin had served as deputy chief of naval operations for warfare systems (OPNAV N9) since May 2013. Aucoin began his career as an F-14 Tomcat pilot and embarked on several CV and CVN aircraft carriers. His ties to the Pacific include commanding Carrier Air Wing 5, forward deployed in Japan aboard USS Kitty Hawk (CV-63), as well as commanding Carrier Strike Group 3 for Pacific deployments aboard USS John C. Stennis (CVN-74) out of its homeport in Bremerton, Wash.

Aucoin will be the 50th commander of U.S. 7th Fleet.

Thomas has led the largest numbered fleet since July 2013. He will now head to the Pentagon, where he will serve as director of Navy staff.

During the ceremony, Thomas asked that Aucoin and the rest of the 7th Fleet personnel keep up the momentum they’ve built during the rebalance to the Asia-Pacific. That momentum has not only included bringing more and newer platforms and weapons to 7th Fleet under the rebalance, but also boosting allies and pushing back against Chinese expansion and aggression.

In January, Thomas told the news service Reuters that he would welcome Japanese patrols in the South China Sea as “a stabilizing function” to the Chinese navy and coast guard. Japan currently patrols only into the East China Sea, where it has an ongoing territorial dispute with China. But Thomas said that “I think that JSDF (Japan Maritime Self Defense Forces) operations in the South China Sea makes sense in the future.”

In March, Thomas went even further and told naval leaders from Association of South East Asian Nations (ASEAN) that he would support multi-national patrols of the region.

“Perhaps easier said than done, from both a policy and organization perspective, such an initiative could help crystallize the operational objectives in the training events that ASEAN navies want to pursue. … If ASEAN members were to take the lead in organizing something along those lines, trust me, the U.S. 7th Fleet would be ready to support.”

Aucoin said he was the excited to be back in the region to continue Thomas’ work.

“I can’t describe how honored I am to be back in 7th Fleet, this is a storied command,” he said during the ceremony.
“7th Fleet is the jewel of our Navy, and I am so grateful to be back here.”

Adm. Scott Swift, commander of U.S. Pacific Fleet, spoke about the importance of the fleet and its forward-deployed forces.

“7th Fleet has been and continues to be the leading edge of the Pacific Fleet in Asia. We see this manifested daily in 7th Fleet’s forward deployed carrier strike group, its expeditionary strike group. Anchored here in Japan by the U.S. Navy alliance, these forces work in concert with all of our allies, partners and friends in the region to advance shared interests and promote shared values.