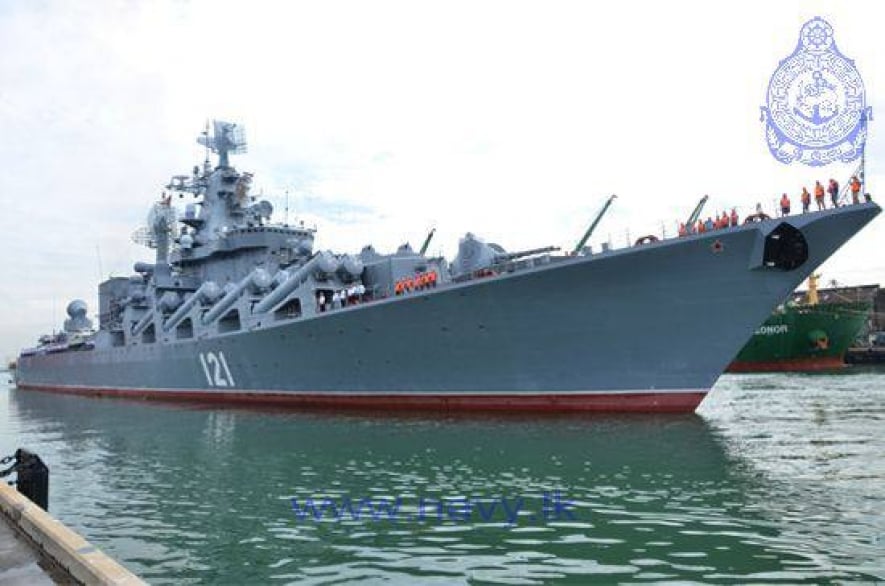 The flagship of Russia’s Black Sea fleet is currently in the South China Sea with plans to conduct air defense and “rocket, artillery and torpedo weapons,” drills in a rare visit to the region, according to an announcement issued Wednesday by the Russian Ministry of Defense.

The 11,500-ton Slava-class cruiser Moscow (or Moskva) left Singapore after a port call to conduct the training exercises in an unspecified area of the South China Sea in the last few days, read a translation of the statement.

The ship — based on a 1970s era design and commissioned in 1983 — was built to be crewed by almost 500 and is centered around 16 massive P-500 (SS-N-12 Sandbox) anti-ship cruise missiles, giving the ship a distinctive saw toothed look.

Moscow left the Russian naval base in Sevastapol, Crimea on Sept. 6 and made port calls in Greece in late September before transiting the Suez Canal in mid-October, according to the Russian Defense Ministry. It’s unclear if the cruiser made a port call to the Russian naval base in Tartus, Syria — though possible given the proximity of the ship to Syria. The ship then arrived at Colombo, Sri Lanka on Oct. 23 and then to Singapore.

While in the South China Sea, it’s unclear if the ship will train with any other ships or freindly navies. Russia enjoys good economic, diplomatic and military relations with both China and Vietnam and has trained with China in the past. However, China and Vietnam’s relationship is currently at a historic low over competing mineral claims in the region that came to a head in May when a Chinese oil platform being petroleum exploration in Vietnam’s exclusive economic zone (EEZ). Russia has mostly stayed quiet on the overlapping claims in the South China Sea, according to a June analysis in The Diplomat.

The rare exercise comes ahead of a planned state visit this month of Russian President Vladimir Putin to Beijing later this month to sign a bilateral cyber security agreement but it is unclear if the deployment is connected.

Regardless, the deployment of Moscow to the South China Sea is a rare show of surface presence in the region, Eric Wertheim, author of the Naval Institute’s Combat Fleets of the World, told USNI News on Wednesday.
“That area of the South China Sea hasn’t been a core Russian operating area but its part of this expanded push from Russia that we’re seeing,” he said.
“There is some effort to ramp up the surface operations but it’s going to be at a slower pace.”

Russia has increased their military operations in the last year but has focused more on its more capable aviation and submarine fleets and less on its aging surface fleets, U.S. Chief of Naval Operations Adm. Jonathan Greenert said on Tuesday.

For surface missions, Russia has leaned on a handful of their better maintained ships for deployments further afield in a scheme they call “inter-theater maneuver” in which selected major capital ships redeploy quickly to different parts of the world as part of a recent naval strategy, according to Jane’s World Navies.

Moscow conducted exercises in the Sea of Japan with Northern Fleet flagship Kirov-class nuclear cruiser Petr Velikiy (or Peter the Great) in 2010 as an example of the tactic, Jane’s said.

Likewise, Moscow also deployed last year to Russia’s naval base in Tartus, Syria as a sign of support for the government of Bashar al-Assad and has participated in anti-piracy operations in the Gulf of Aden with the U.S. led Combined Task Force 151 (CTF-151).

However, it’s still unclear whether the current deployment of Moscow is an anomaly or a sign of greater Russian surface expansion.

“It’s hard to tell how long this is going to last, but this is them trying to reassert their place in the world,” Wertheim said.