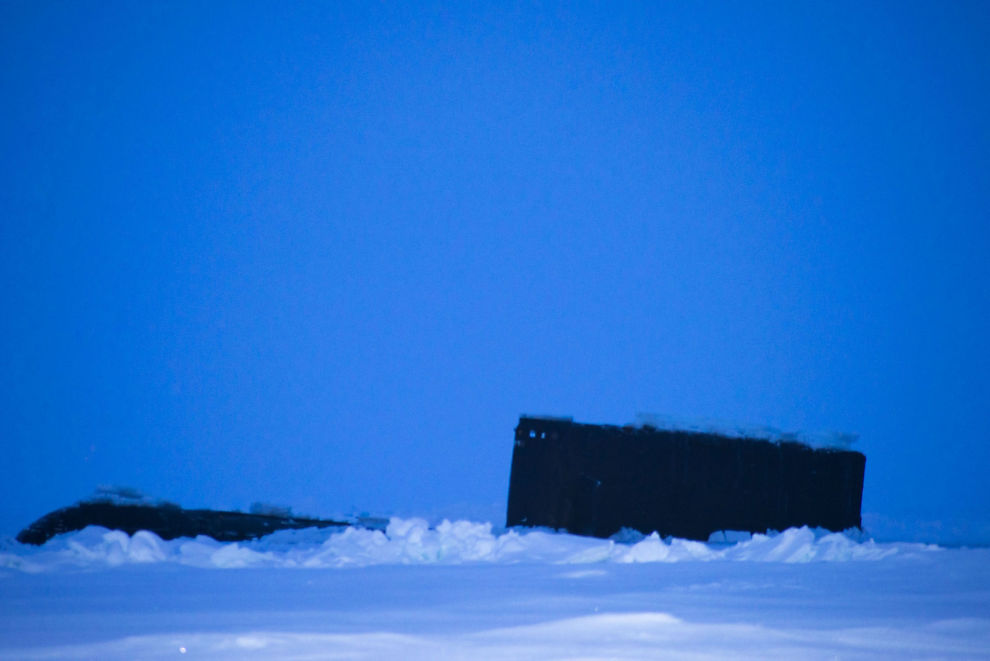 Photo from Audun Tholfsen and Yngve Kristoffersen of an alleged Russian ballistic missile submarine in the Arctic Circle on Oct. 16, 2014.

WASHINGTON, D.C. — The Russian Navy’s submarine force has been more active this year against the backdrop of soured relationships with the West over the ongoing internal conflicts in Ukraine and the forced annexation of Crimea by Russia, U.S. Chief of Naval Operations (CNO) Adm. Jonathan Greenert said on Tuesday.

“I’d say they’re very busy in the undersea domain, I’ll leave it with that,” he said at The Brookings Institution.
“They’re not as busy in the surface domain.”

Russia’s surface fleet is largely antiquated and in poor repair and its submarine fleet is by far the most capable component of its naval forces and has been operating further afield than its surface fleet in the last several years.

“Although Moscow has made no attempt to conceal the fact that it plans to accelerate submarine operations, the audacity of some recent patrols exemplifies a troubling trend,” wrote Lt. Cmdr. Tom Spahn, USNR in a June 2013 article on Russian submarine forces in Naval Institute Proceedings.
“In late 2012, an Akula allegedly remained undetected for several weeks while conducting operations in the Gulf of Mexico. Later that same year, a Sierra-2-class guided-missile submarine crept within a mere 200 miles of the Eastern Seaboard of the United States. In the Mediterranean, Russian submarines have similarly increased operations, likely including participation in a massive naval exercise off the coast of Syria in January 2013.”

More recently, Norwegian scientists spotted and photographed what looked to be a 13,700-ton Delta-III Project-667 nuclear ballistic missile submarine (SSBN) peeking out from an icepack in the Arctic Circle. Last week, the Latvian military spotted a Russian Kashtan-class submarine support ship 18 nautical miles off their coast in the Baltic, according to press reports.

“Not as many people know what the Russians are up to. I can’t go into detail, obviously, but they spend a lot of money,” he said.

Though other parts of the Russian Navy lag behind, Greenert indicated their surface shipbuilding effort is growing.

“They are building new frigates, they are building new destroyers [but] they’re not out and about so much,” Greenert said.
Greenert also echoed comments from U.S. Air Force Gen. Philip Breedlove — U.S. European Command (EUCOM) head and NATO Supreme Allied Commander (SACEUR) — on an increase in Russian air activity.

“They’re pretty active in the air — their long-range flights and reconnaissance,” Greenert said.
“They’re probably more active than they’ve been in a decade in that regard. They have operating money, clearly, they are out and about.”

NATO has had more than 100 intercepts of Russian aircraft in 2014 — three times higher than 2013, a U.S. defense official told USNI News on Monday.

“They’ve probed in the Alaska area in [our] ADIZ if you will. We responded and they acted professionally in all regards,” he said.
“So far so good in that regard but I would call them [busier] in their operations.”