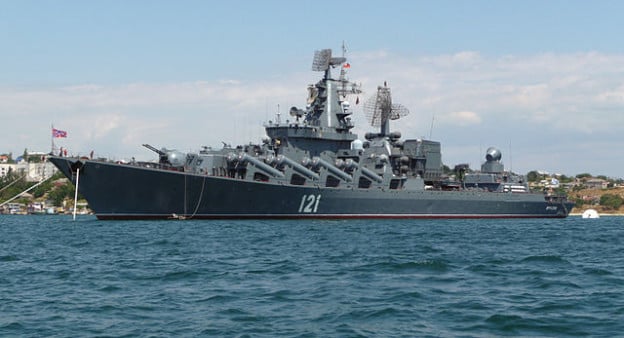 On Friday a group of Russian warships passed from the Black Sea through the Bosphorus and Dardanelles. The group included destroyers, landing ships, frigates and supply ships from the Baltic, Black Sea, and Pacific fleets. It was scheduled to replace the current deployment of landing and surveillance ships already in the area, with Russian naval officials carefully noting that it was a “planned rotation” and not a “new” group.

Separately, over the past few days, the Russians also decided to send the flagship of the Black Sea fleet, the heavy rocket cruiser Moscow, along with another frigate (the Smetlivy) and landing ship (the Nikolai Filchenkov) to join the “inter-fleet group” patrolling off the coast of Syria. The arrival of those additional ships will temporarily boost the total Russian naval presence in the eastern Mediterranean to 11 ships, which is, by Russian standards, a very significant deployment.

What’s not immediately clear is what the ships actually will be doing once they are in the Mediterranean, now chock-full of French, American, Italian and British naval vessels. Russian media reports and official statements from sources in the defense ministry claim that the vessels are being sent there to protect Russia’s “national interests.” The protection of interests sounds perfectly reasonable in principle but provides little guide to the practical behavior of the forces now sailing toward Syria. Is the Russian navy actually going to do anything?

If past experience is any guide, the Russian ships will mostly just sit there. A closer inspection of their size and capabilities shows why. The Moscow, by far the most potent asset the Russians are sending, is designed as an anti-ship vessel, carrying 16 SS-N-12 Sandbox anti-ship cruise missiles in distinctive and easily visible launch tubes (the missiles distinguish the Slava-class cruisers from others and give them their unique silhouette). But the chances of a naval engagement in the eastern Mediterranean are, thankfully, slim, and there is almost no chance that the Moscow would ever be used for its intended purpose—sinking American aircraft carriers. But while the Moscow’s anti-ship and anti-air armaments are formidable, it has very little capacity to strike targets on land, the sort of capability it would need to have were it to attempt any meaningful intervention in Syria.

The other combat vessels in the Russian deployment are similarly ill-suited to any of the missions they would be expected to undertake in the event of an intervention in Syria, with an emphasis on anti-sea and anti-submarine capabilities. It should also be noted very clearly that several of the ships in the Russian deployment are “large landing vessels” that have virtually no armaments and that are, for all intents and purposes, freighters. Those could conceivably play a supporting role in a potential evacuation of Russian citizens, diplomats, and military advisers, but given Syria’s geography and the long (and extremely dangerous) distance from Damascus to the coast, extraction by air is a far more likely prospect (and most evacuations to date have, indeed, been by air).

There have been some allegations that the Russian ships are in the region to “shadow” the group of US destroyers there and, in the event the United States decides to intervene, perhaps to even relay their coordinates to the Syrians—who, thanks to the Russians, possess sophisticated anti-ship missiles. I think this is mistaken. The Russians are clearly willing to stand up for Assad in international forums such as the United Nations, but becoming involved in a shooting war with the U.S. Navy (even if only by proxy) is the sort of gamble that they have not been willing to take. Recall that at any point over the past several years the Russians could have directly intervened on behalf of Assad, but have refrained from doing so. I cannot imagine a scenario in which they would abandon that position and become directly and intimately involved in attacking the American military.

Russia’s naval deployment is just the latest in a series of attempts to demonstrate its continued relevance, to show the flag, and prove that Russia’s voice still counts and needs to be respected. As politics, then, the Russian presence in the Mediterranean is significant. But in purely military terms, the Russian task force simply does not possess the capabilities to tilt the scales one way or another.