The U.S. Navy and the Missile Defense Agency began construction of Lockheed Martin’s Aegis Ashore installation in Romania in October. The ballistic missile defense (BMD) site will be the first of two facilities as part of the Obama administration’s European Phased Adaptive Approach (EPAA) to BMD. The first site will go online in 2015 and a second site in Poland will be ready by 2016. The land-based sites will work in tandem with patrols from Aegis BMD capable destroyers and cruisers, The program has drawn the ire of Russian officials who say the EPAA unfairly targets Russia. 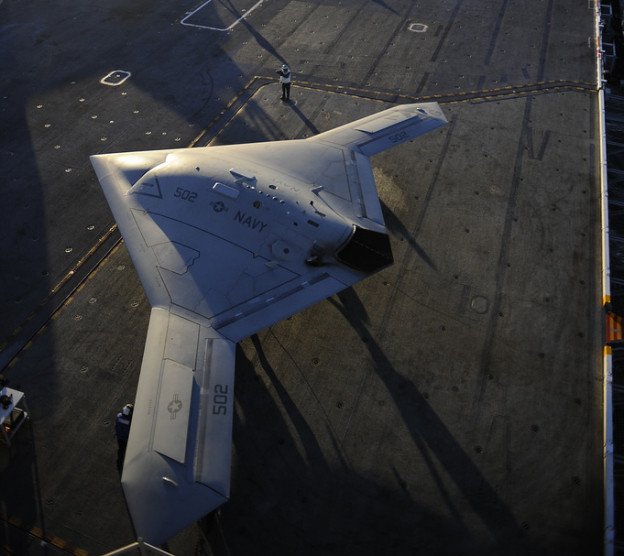 A June overview of requirements for the Navy’s planned Unmanned Carrier Launched Airborne Surveillance and Strike (UCLASS) presented an system that differed from the Pentagon’s original vision. As part of the 2006 Quadrennial Defense Review, the Department of Defense outlined a stealthy long-range unmanned intelligence, reconnaissance and surveillance (ISR) penetrating strike aircraft. The aircraft was to have with an equivalent weapons payload of a F-35C Lighting II Joint Strike Fighter (JSF) and integrated to, retired Chief of Naval Operations (CNO) Adm. Gary Roughead told USNI News. Instead, draft requirements for UCLASS had a system that had a quarter of the weapons payload and would operate when the rest of the carrier air wing was offline.
Since June, an internal Pentagon debate has delayed the release of a draft request for proposal for UCLASS to industry for several months — delaying bids from likely contenders Lockheed Martin, Northrop Grumman, Boeing and General Atomics.

The years-long competition for the Navy’s next generation Air and Missile Defense Radar (AMDR) didn’t end with an $386 million October contract award to Raytheon from the Navy to build the S-band AMDR and radar suite controller (RSC). Shortly after, competitor Lockheed Martin filed a protest with the Government Accountability Office.
“Lockheed has supplied radars for the Navy’s guided missile destroyers throughout the Aegis program — primarily with its SPY-1 line of radars — back to the early 1980s. Given Lockheed’s longevity with the program, the protest did not come as a surprise,” wrote USNI News in October.
The AMDR is to be the centerpiece of the service’s Flight III Arleigh Burke guided missile destroyer (DDG-51). The GAO is due to release an initial ruling on the protest by the end of January.

General Dynamics NASSCO delivered the first Mobile Landing Platform (MLP) to the U.S. Military Sealift Command (MSC) and began construction of the first dedicated Afloat Forward Staging Base (AFSB). The two ship types are designed to help U.S. Navy and Marine Corps amphibious forces better operate in the open ocean. The MLP acts as an open ocean transfer point for vehicles and equipment from MSC cargo ships directly to Navy landing craft. The scheme enhances the effectiveness of Marine and Navy Amphibious Ready Groups without placing additional material on the amphibious warships. The AFSB serves as a low cost refueling and logistics hub for mine countermeasures (MCM) helicopters and special operations forces.

In 2013, Chief of Naval Operations (CNO) Adm. Jonathan Greenert declared the Ohio-class Replacement Program (ORP) “the top priority program for the Navy,” in September. The yet-unnamed next generation nuclear ballistic missile submarine will replace the 14 Ohio SSBNs starting in 2031 with construction to start in 2021. The 12 boat program has an estimated cost of almost $100 billion. The Navy asked for an additional $30 billion in additional funds to buttress the Navy’s shipbuilding budget to fund the ORPs over the 15 years the Navy will be buying the boomers.
“If we get zero, you’re looking at 32 less ships [in that period],” Rear Adm. Richard Breckenridge, the Navy’s then director of undersea warfare told a congressional panel. 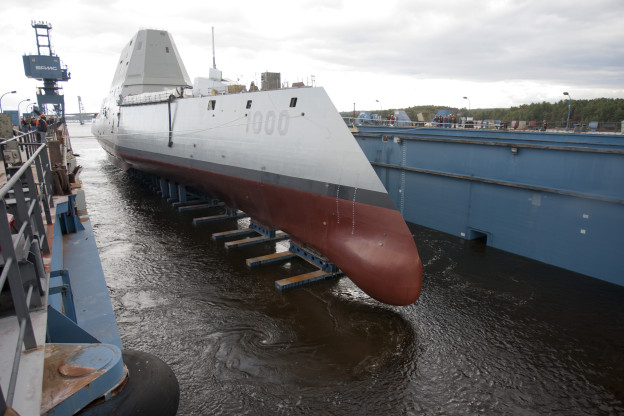 General Dynamics Bath Iron Works launched the first of the Zumwalt-class guided missile destroyer in October. The ship was 87 percent complete.
“The class was originally slated to be a replacement for the Arleigh Burke destroyer (DDG-51) before the class was truncated to three hulls. The Navy plans to have the ship serve in a surface fire support role. The offensive centerpiece of the ship is the 155 mm Advanced Gun System (AGS) that will fire a rocket assisted guided projectile from more than 60 nautical miles away,” wrote USNI News in October.
The ship’s launch was relatively quiet, due to the federal government shutdown, but garnered significant media attention due the name of the ships’ first skipper — Capt. James Kirk.
The ship is scheduled to commission in 2015.

USS Michael Murphy (DDG 112) is moored at its homeport at Joint Base Pearl Harbor-Hickam. US Navy Photo

Naval Sea Systems Command awarded $6.1 billion in contracts to Huntington Ingalls Industries and General Dynamics Bath Iron Works for nine Arleigh Burke guided missile destroyers (DDG-51s). HII will build five ships for $3.3 billion and BIW will build four for $2.8 billion. The deal could include a tenth destroyer pending fiscal juggling due to sequestration cuts from the 2011 Budget Control Act.
The deal will include the first ships in the Flight III configuration that will field the new Air and Missile Defense Radar (AMDR).