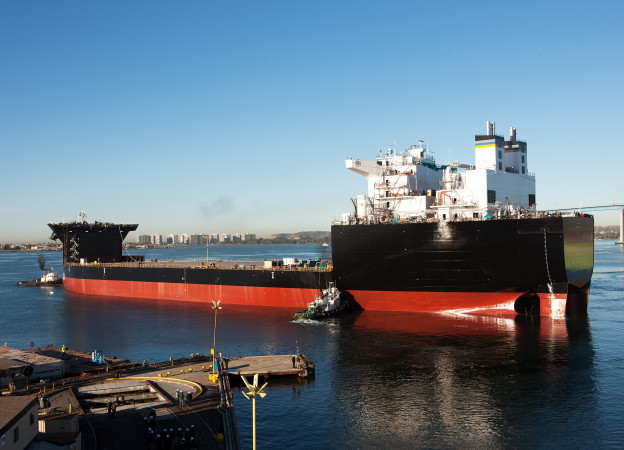 The first Mobile Landing Platform is expected to arrive Friday at Naval Station Everett, Wash. to conduct contract acceptance trails that will extend into September.

“INSURV goes aboard the ship and verifies the Navy got what it paid for and to test it again to make sure everything works,” James Marconi with MSC told USNI News on Thursday.

In October, the ship will take on the MLP cargo transfer features that will allow the ship to transfer goods and vehicles at sea from MSC cargo ships to Navy Landing Craft Air Cushion (LCAC) hovercraft at Vigor Marine in Portland, Ore, Marconi said.

MLP is scheduled to begin full operational testing in the Spring and Summer of next year ahead of the ship being fully operational in Fiscal Year 2015.

The ship will be forward deployed, though MSC did not provide a location.

In May, Chief of Naval Operations Adm. Jonathan Greenert said Montford Point would be based in Guam.

The MLP is based on NASSCO’s Alaska-class oil tanker design and will act as an open-ocean transfer point for men, vehicles and equipment for amphibious operations. The MLP was originally slated to be a $1 billion ship but by reducing the capabilities of the ship and basing it off an existing design lowered the price to $500 million a ship, Navy officials have said.

The 764-foot vessel, with a crew of 33, can take on ballast and lower itself down into the water to allow up to three LCACs to dock on the MLP’s cutaway midsection allowing vehicles — up to a M1-A1 main battle tank — to transfer to the LCACs from MSC cargo ships in the open ocean. There are also plans for the MLP to interface with the MSC’s new Joint High Speed Vessel (JHSV) aluminum catamaran. 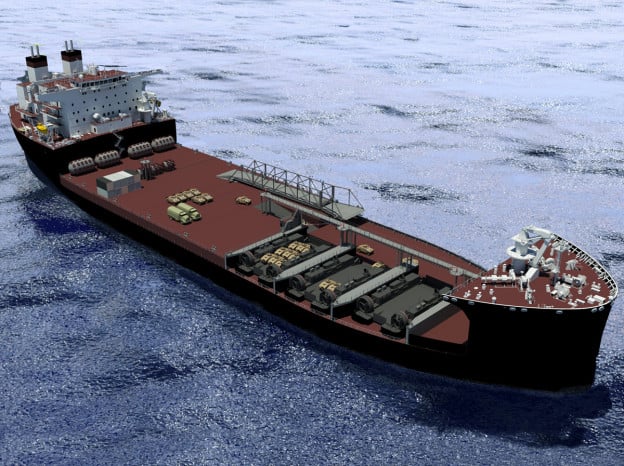 NASSCO is currently building the second MLP, John Glenn (MLP-2) and a third ship based on the Alaska design to act as an Afloat Forward Staging Base (AFSB) for mine countermeasure (MCM) helicopters and special operations forces. Currently the former amphibious warship USS Ponce (AFSB(I)-15) is serving as an interim AFSB.