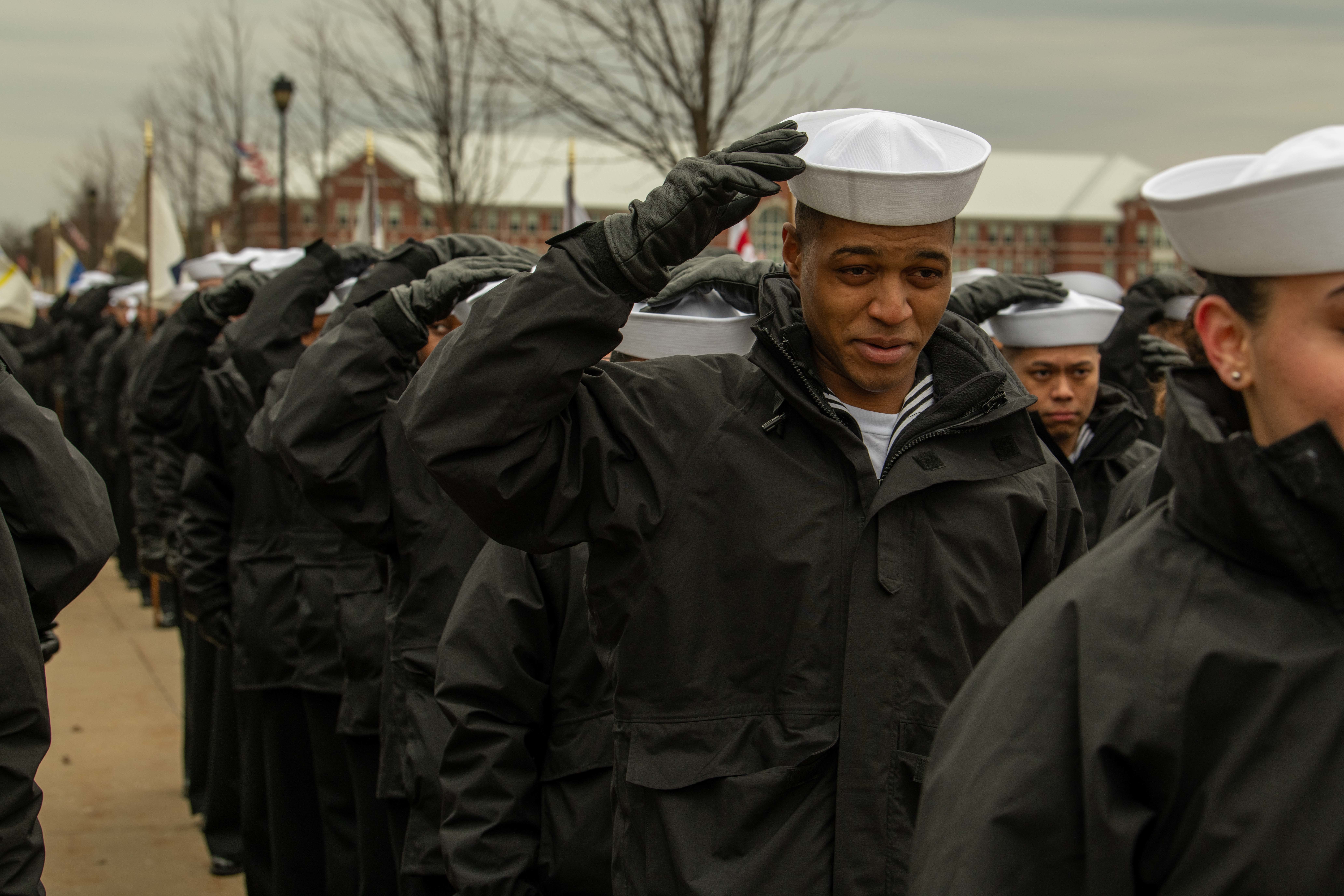 Recruits hold on to their covers before marching into Midway Ceremonial Drill Hall at Recruit Training Command, Great Lakes on March 18, 2022. US Navy Photo

The Navy is boosting its recruiting goal by 3,400 sailors to meet its Fiscal Year 2023 end strength requirement despite an increasingly difficult recruiting environment, service officials told USNI News on Tuesday.

The sea service needs to recruit 37,700 active-duty enlisted sailors in FY 2023, according to a Navy release issued last week. The Navy bases its goal on the number of sailors currently in the service, the targeted end strength set in the budget and forecasted personnel losses.

Despite budgeting for a slightly smaller active-duty enlisted end strength, the sea service determined it needed to increase its recruiting goal by 3,400. The goal for FY 2022 was 33,400, which the sea service exceeded by just 42 sailors.

The Navy did not meet its FY 2022 goal for active-duty officers, as well as both enlisted and officer goals for the reserve. The sea service has not released an FY 2023 goal for officers.

The Navy’s budget proposal from the spring indicated that it would be decreasing its total end strength by 1,200 in FY 2023. There’s a planned reduction in total active-duty officers, which would decline from 56,657 in FY 2022 to 55,845 in FY 2023. The sea service also budgeted for fewer midshipmen, one source of commissioned officers, by 43.

The FY 2022 end strength for enlisted sailors was 286,487, Capt. Jodie Cornell, spokesperson for the chief of naval personnel told USNI News on Tuesday. That total is slightly higher than the goal in the FY 2022 budget proposal.

The Navy’s projected end strength for active-duty sailors decreased by 382 between FY 2022 and FY 2023, Cornell said.

The Navy’s FY 2022 goal for recruiting active-duty officers was 2,507. The sea service recruited 2,298, according to service.

The Navy cited a difficult recruiting environment as one cause for failing to meet its numbers and just making its active-duty enlisted sailors goal.

“Competition for top talent [was] fierce within the branches of the Department of Defense and the private sector, where major corporations have begun offering incentive packages to compete with the military,” according to the Navy..

Currently, about a third of the DEP pool are high school seniors who have enlisted but cannot go to boot camp until graduation in spring 2023.

“The Navy is expected to be in a contract-and-ship posture, where future sailors are shipped to boot camp within weeks or even days of contracting to serve,” according to the service. “This posture is expected to persist through FY23.”

The Navy is not alone. Other branches and the Department of Defense have also expressed concern about the tough recruiting environment.

The Department of Defense has been upfront about its recruiting challenges, Pentagon spokesman Brig. Gen. Pat Ryder said during a Tuesday press briefing. These include a smaller population at the target age for service and fewer people willing to join the military.

The DoD and the military branches are working to understand causes and find solutions for recruiting difficulties, Ryder said.

“Because at the end of the day, this all-volunteer force needs volunteers, and it’s essential to defending our country and our way of life,” he said.