The Navy’s latest budget proposal will cut more than a thousand sailors from the sea service, a reflection of a difficult recruiting environment that defense officials predict will only get worse.

The Navy should make its recruiting goals for active-duty sailors this year, Chief of Naval Operations Adm. Mike Gilday told Congress on Wednesday. But in the long term the Navy expects to see more challenges in meeting those numbers, especially when it comes to recruiting sailors with cyber expertise, Gilday said.

By the end of September 2023, the Navy’s end strength is asking for a decrease of more than 1,300, according to projections released in the sea service’s Fiscal Year 2023 budget request.

One of the reasons for the decrease in both average and end strength is trouble recruiting, a problem affecting all military branches, not just the Navy, its top leaders told the Senate Armed Services personnel subcommittee.

The services are struggling to recruit in a competitive marketplace, which has only been exacerbated by the pandemic, Under Secretary of Defense for Personnel and Readiness Gil Cisneros testified in an April 27 hearing.

In order to combat the market, the Department of Defense planned for a 4.6 percent pay raise, which will help the economic security of service members, Cisneros told senators.

The Navy is beginning to see more competition from the private sector, with larger companies offering incentives that match what the military offers recruits, Vice Adm. John Nowell, chief of naval personnel, told the senators. This comes from a higher rate of unemployment during the COVID-19 pandemic.

“While we are trending to meet our FY 22 accession mission at the aggregate level, we will do so by reducing delayed entry program from historic norms, which will be challenging to sustain to remain competitive,” Nowell testified.

In FY 2021, the Navy surpassed its recruiting goals for the active-duty enlisted component but struggled with reservists, according to data provided by Capt. Dave Hecht, spokesperson for the chief of naval personnel.

The goal for recruiting was 33,400 for active-duty enlisted personnel. The Navy enlisted 33,559 sailors. However, for reservists, the Navy brought in 5,631 recruits, falling short of the 6,425 target.

The Navy failed to meet its goal for active-duty officers, commissioning 2,508 when its target was 2,522. It also failed to hit the target of 1,319 for reserve officers, only bringing in 866.
The competition for the Navy is two-fold, said Cmdr. Dave Benham, spokesperson for Navy Recruiting Command.

To try to compete, the Navy is offering a minimum enlistment bonus of $25,000, with up to $50,000 for certain jobs, Benham told USNI News in an email.

“While service is not just about the money, we feel these bonuses, taken with existing Navy benefits and the inherent satisfaction of adventure, global travel and service to our country in the world’s finest Navy will give us an advantage in recruiting top talent to lead us forward,” Benham said.

The Navy also achieved it goal for enlisted active-duty sailors in FY 2020, but did not meet the goal for active-duty officer or reserve enlisted sailors or officers.

Other branches are also offering enlistment bonuses, including the Army and the Air Force.

Some jobs can earn soldiers up to $40,000 in bonuses, with additional bonuses, including for shipping out early, possible. The Air Force is offering up to $50,000 in bonuses, although the high bonuses are for explosive ordnance disposal and special warfare enlistees.

Secretary of Defense Lloyd Austin is aware of the recruiting challenges facing the military, including the amount of jobs present in the American economy, Pentagon Press Secretary John Kirby said during a May 5 press briefing.

“The propensity to serve is not always as strong as we’d like it to be, and quite frankly, an uncomfortably large number of young Americans aren’t able to meet the entry requirements, Kirby said. “Then add to that COVID, which impacted our recruiters’ ability to get face-to-face contact with young men and women. All of that has combined to make it a challenging recruiting environment.”

Sailors assigned to the forward-deployed amphibious assault ship USS America (LHA-6), stand in formation during a dress white uniform inspection on the ship’s flight deck on May 4, 2022. US Navy Photo

Although the Navy is predicting a decrease in both end strength and average strength, the sea service did relatively well in recruiting and retention during the pandemic years.

A RAND report found that the Navy increased its end strength and retention in FY 2020 compared to FY 2019, despite the beginning of the COVID-19 pandemic. However, the number of enlistment contracts did drop, as it did with the other services.

While the pandemic led to higher unemployment rates, which usually lead to more military recruitment, military branches were unable to recruit in person, the RAND report noted.

The drop in enlistment contracts but increased end strength led the RAND researchers to theorize that the Navy and other branches focused on retention in order to address end strength.

The Navy was the only branch in the military that saw increased accession between FY 2019 and FY 2020, according to the RAND report.

The Navy could rely on retention again in order to fill the fleet. In FY 2021, the Navy had a 67 percent re-enlistment rate for sailors with six years of service or fewer, 68 percent for six to 10 years of service and 85 percent for 10 to 14 years, according to a January NAVADMIN that details retention goals.

All groups surpassed the benchmarks for retention.

For FY 2022, the re-enlistment rates depend on assignment, according to the memo. For example, aircraft carriers have retention goals of 64 percent for sailors with six years of service or fewer, 75 percent for six to 10 years and 90 percent for 10 to 14 years. 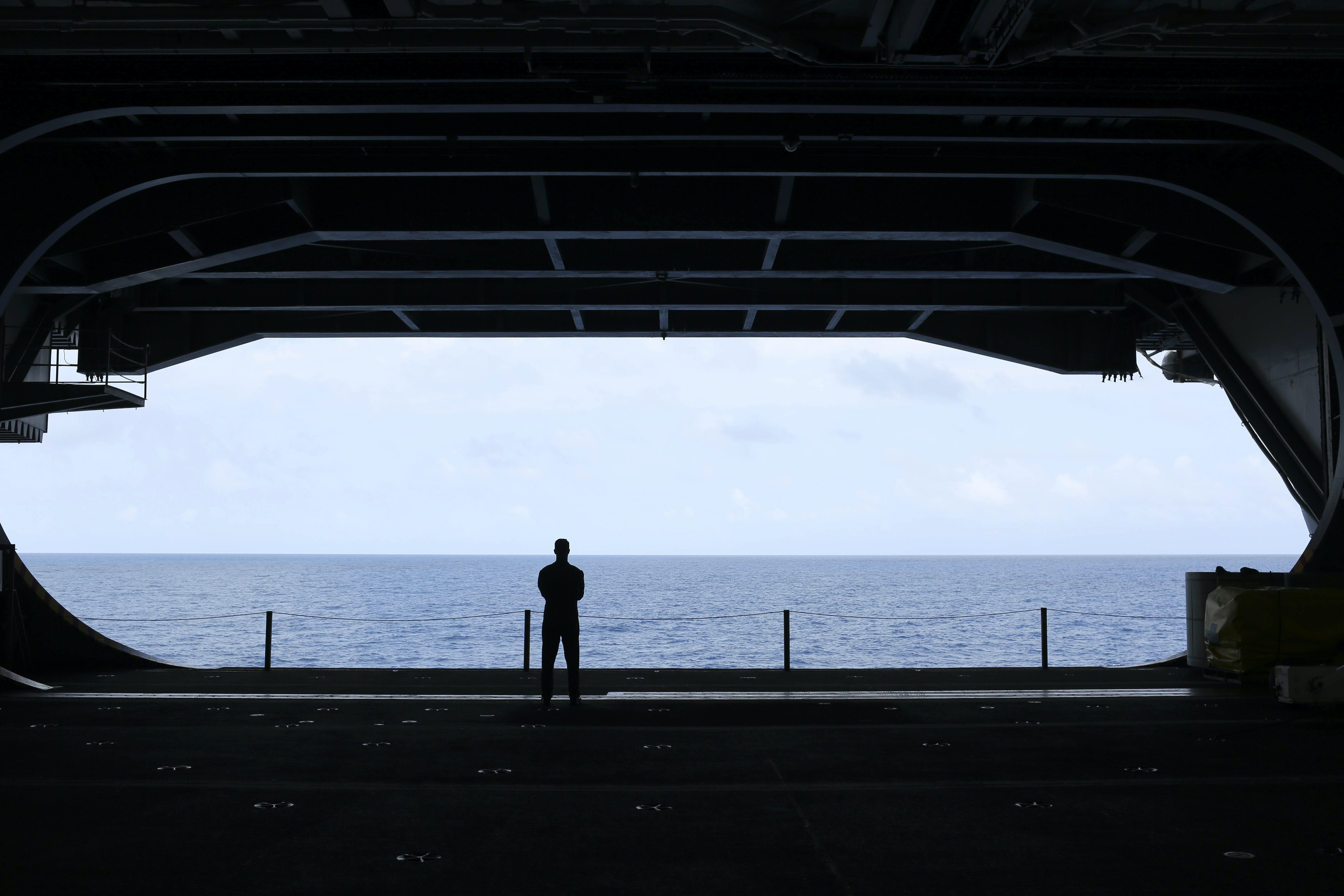 A sailor looks out at the South China Sea from the hangar bay aboard the Nimitz-class aircraft carrier USS Abraham Lincoln (CVN-72) on Jan. 30, 2022. US Navy Photo

Destroyer assignments have slightly higher retention goals at 72 percent for sailors with six years of service or fewer, 79 percent for six to 10 years and 94 percent for 10 to 14 years.

As of March, the Navy is exceeding its retention goals for sailors with up to six years of service, Hecht said in an email. The service has also retained 9,259 sailors, ahead of its 8,716 goal.

“We are confident that we will attain the overall annual retention goals,” Hecht told USNI News.