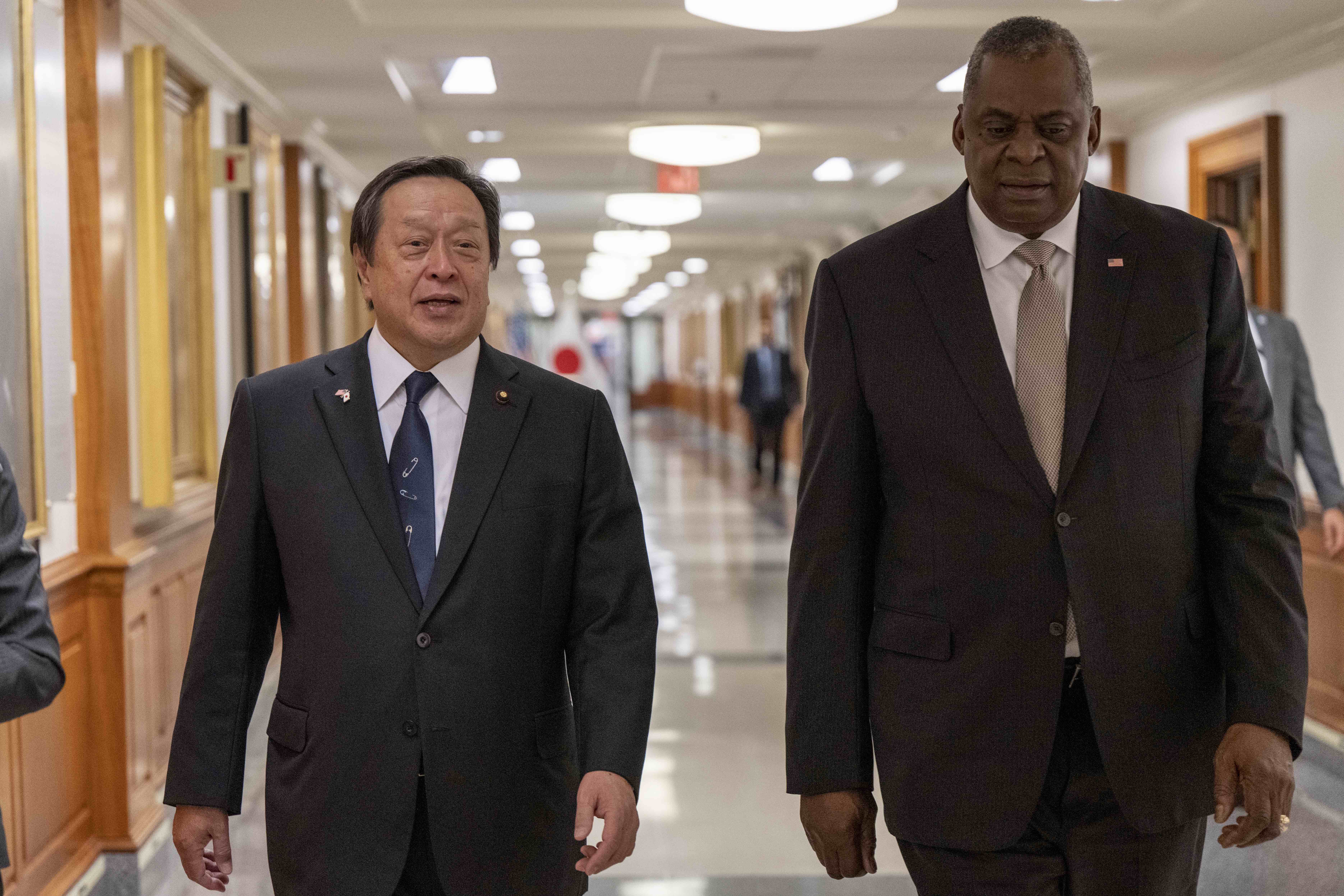 Secretary of Defense Lloyd Austin and Japanese Defense Minister Yasukazu Hamada reaffirmed their commitment to an alliance on Wednesday during the defense secretaries’ first meeting since Hamada’s appointment in August.
The U.S.-Japan Alliance remains a cornerstone of peace and prosperity in the Indo-Pacific and both countries are bound by deep friendship and trust, Austin said during his welcoming remarks. The two countries share common interests and a vision of a free and open Indo-Pacific, as well as a rules-based international order, he added.

“But China’s recent aggressive behavior and Russia’s unprovoked invasion of Ukraine are serious challenges to that vision,” Austin said. “So let’s be clear. China’s coercive actions in the Taiwan Strait and in the waters surrounding Japan are provocative, destabilizing and unprecedented.”

In his remarks during the welcoming, Hamada said, “We have seen various events that are of concern for the Japan-U.S. alliance, one after another, including Russia’s aggression against Ukraine, the landing of China’s ballistic missiles near waters of Japan, and China and Russia’s joint exercise around Japan. We can never condone unilateral attempts to change the status quo in any parts of the world”.

Austin reaffirmed the United States’ unwavering commitment to the defense of Japan, which includes the U.S. commitment to credible and resilient extended deterrence “using the full range of our conventional and nuclear capabilities.” Hamada said he would cooperate with Austin to make sure that that the extended deterrence, including nuclear capabilities, remains credible and resilient.

The two defense chiefs held a 95 minute discussion on a variety of items, according to a Japan Ministry of Defense news release on the meeting. They criticized China’s ballistic missile launches last month and Russia’s invasion of Ukraine, and also highlighted how crucial it is to maintain calm in the Taiwan Strait.

“Regarding North Korea’s nuclear and missile issues, the Ministers welcomed the Japan-U.S.-ROK exercise during the missile warning exercise Pacific Dragon in August. The Ministers confirmed that they would further advance even closer Japan-U.S. bilateral and Japan-U.S.-ROK trilateral cooperation in order to promptly respond to North Korea’s provocative actions in a concerted manner,” the release reads.

Meanwhile, the Russian Defense Ministry on Thursday announced that Russia and China are carrying out a joint naval patrol in the Pacific Ocean.

“As part of the implementation of the program of international military cooperation, warships of the Russian Navy and the Chinese People’s Liberation Army Naval Forces are conducting a second joint patrolling in the Pacific Ocean,” the ministry said in its release, adding that the patrolling mission is meant to strengthen naval cooperation between Russia and China, maintain peace and stability in the Asia Pacific region, monitor sea waters, and protect Russian and Chinese maritime economic activity.

Nanchang, Yancheng and Dongpinghu took part in Russia’s Vostok 2022 strategic drill, which ended on Sept. 7. The PLAN ships – along with Sovershennyy, Gromkiy and Hero of the Russian Federation Aldar Tsydenzhapov – conducted drills and live firing in the Sea of Japan on Sept. 3 before sailing east through La Pérouse Strait the next day. This is the second time Russian and Chinese ships have carried out a joint naval patrol; the first occasion was last October.

At the same time, other Russian and PLAN ships have been active around Japan, with a PLAN hydrographic survey ship violating Japan’s territorial waters on Thursday, according to the MoD. Japan’s Ministry of Defense issued a news release on Thursday claiming that a Shupang-class survey ship was sighted at 3:30 a.m. local time that day sailing westward in Japan’s contiguous zone south-southeast of Tanegashima Island, part of the Osumi islands. Later, at 7:20 a.m., the PLAN ship entered Japanese territorial waters south of Yakushima Island before leaving Japan’s territorial waters west of Kuchinoerabu Island at 10:52 a.m. JMSDF destroyer JS Inazuma (DD-105) and a JMSDF P-1 Maritime Patrol Aircraft (MPA) of Fleet Air Wing 1 based at JMSDF Kanoya Air Base, Kyushu monitored the PLAN ship. Japanese media reports said Tokyo has lodged a diplomatic protest on the incident.

Meanwhile, Japanese helicopter carrier JS Izumo (DDH-183) and destroyer JS Takanami (DD-110) – which form the first surface unit of the JMSDF Indo-Pacific Deployment 2022 (IPD22) – are now exercising in the Bay of Bengal with the Indian Navy after exercising with the U.S. Navy and Royal Canadian Navy last week in the South China Sea for Exercise Noble Raven 22.

𝙍𝙁𝙉𝙎 𝙎𝙖𝙫𝙚𝙣𝙖𝙘𝙖 departed Cairns, Australia today for Darwin where she will participate in regional EXERCISE KAKADU

From Sunday until Saturday, the Japan Maritime Self-Defense Force will perform an exercie known as the Japan-India Maritime Exercise 2022 (JIMEX2022) with the Indian Navy, according to a JMSDF news release issued on Tuesday. The objective is to better the tactical capabilities of the JMSDF and interoperability with the Indian Navy. Izumo and Takanami will drill with destroyer INS Ranvijay (D55), frigate INS Sahyadri (F49), corvettes INS Kadmatt (P29) and INS Kavaratti (P31), offshore patrol vessel INS Sukanya (P50), replenishment ship INS Jyoti (A58) and submarines. Mig-29K fighters, P-8I Poseidon Maritime Patrol Aircrafts (MPA) and Do-228 MPAs from the Indian Navy are also participating. Training activities in the exercise include anti-submarine warfare, surface gunnery, air defense warfare, replenishment at sea and anti-aircraft gunnery, according to the release.

The IPD22 is a four-month deployment JMSDF throughout the Indo-Pacific region from June 13 through Oct. 28 that has been conducted annually since 2019. This year’s iteration includes two surface units, the first featuring Izumo and Takanami, while the second surface unit includes destroyer JS Kirisame (DD-104). While a JMSDF submarine, a P-1 MPA, a UP-3D Orion Electronic Intelligence training aircraft and a US-2 search and rescue seaplane are also on the deployment, the submarine and aircraft will only participate in some of the surface units’ engagements. Kirisame, the second surface unit, left Port Moresby, Papua New Guinea on Sept. 6 following an engagement there and is now in Darwin for the Royal Australian Navy Exercise Kakadu 2022 (KA22), which takes place from Sept. 12-24.

“[M]ore than 15 vessels, more than 30 aircraft and around 3,000 personnel from more than 20 countries,” will join for the drills, according to an Australian Department of Defense news release. The release did not disclose which ships and countries are participating.

Several countries, namely Fiji, France, India, Indonesia and Malaysia, have already announced their participation in the exercise, along with the ships deployed for it. Fiji is participating with patrol craft RFNS Savenaca (401) and a social media post by the Republic of Fiji Navy shows that the U.S. Coast Guard Cutter Oliver Henry (WPC-1140) is also participating in the exercise.

France has deployed frigate Vendémiaire (F734) for the exercise, while India is participating with frigate INS Satpura (F48) and an Indian Navy P-8I MPA.

Satpura is on an extended operation deployment to the Pacific that began at the end of May and included participation in the Rim of the Pacific 2022 exercise. Prior to arriving in Darwin, the Indian frigate stopped in Fiji for a port call from Sept. 1-3.

Indonesia and Malaysia have each sent a frigate: KRI Raden Eddy Martadinata (331) and KD Lekiu (FFGH30), respectively. Lekiu on Sunday conducting a replenishment at sea exercise with replenishment ship HMAS Stalwart (A304).

Replenishment at Sea (RAS) between @KD_LekiuFFGH30 & HMAS STALWART today before the start of Exercise KAKADU 2022 at Darwin, Northern Australia from 12-24 Sep 22.@tldm_rasmi@Australian_Navy@fmyeor#KA22#RPEX22#PartnershipLeadershipFriendship pic.twitter.com/H5FkMoJ95g