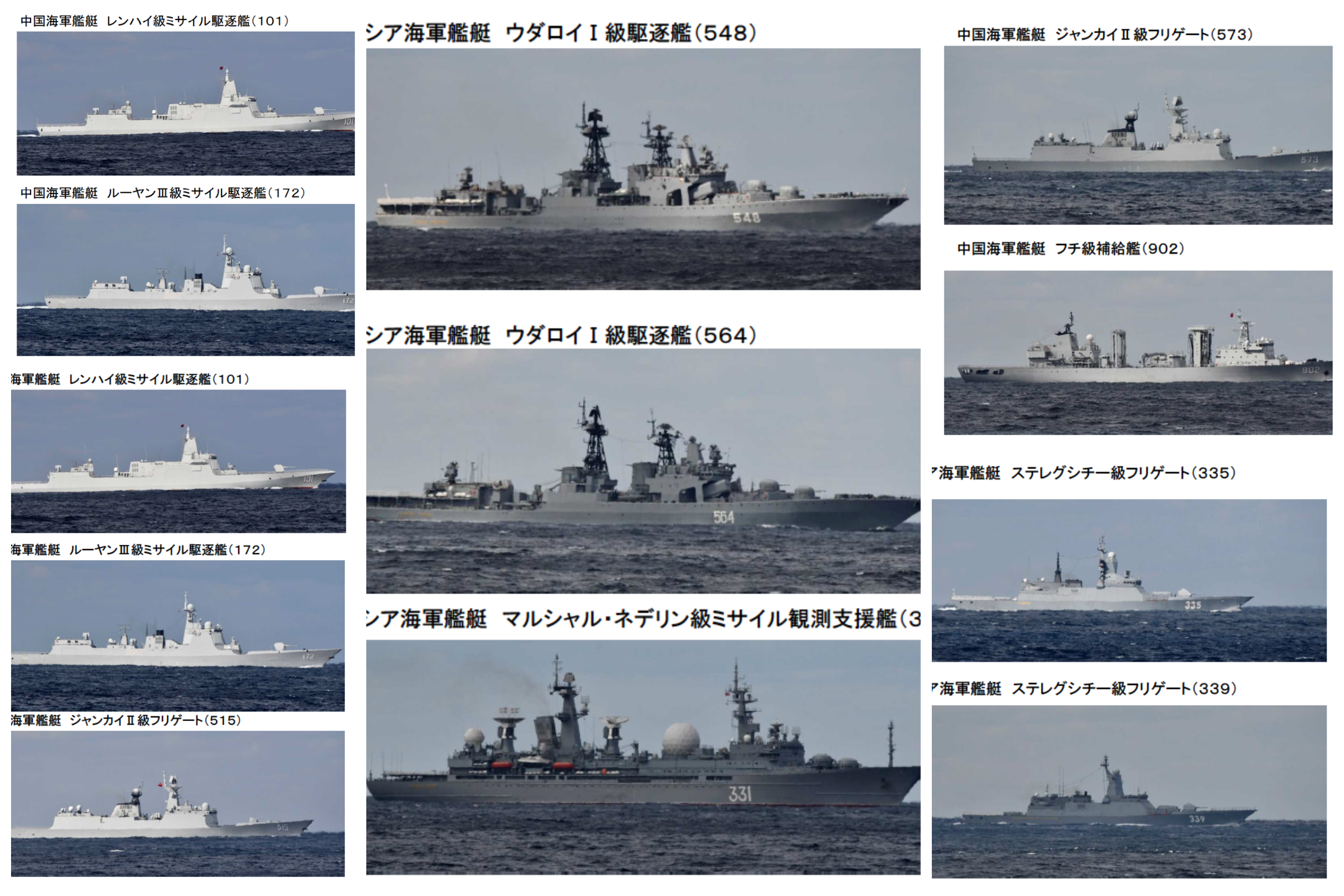 A combination of 10 Russian Navy and Chinese People’s Liberation Army Navy ships sailed from the Sea of Japan to the Pacific Ocean through the Tsugaru Strait between Japanese home islands of Honshu and Hokkaido, Joint Staff of the Japan Self Defense Force said in a press statement.

The Japanese Maritime Self-Defense Force spotted the ships at on Monday, in waters about 70 miles southwest of Okushiri Island in Hokkaido. The ships sailed east through the strait into the Pacific Ocean. The release noted that it was the first time naval vessels from both countries had sailed jointly through the strait. The Joint Staff release identified the Chinese ships as Type 055 destroyer Nanchang (101), Type 052D destroyer Kuming (172), Type 054a frigates Binzou (515) and Liuzhou (573) and a unnamed replenishment ship (902). Russian ships were the destroyers Admiral Tributs (564) and Admiral Panteleyev (548), corvettes Gromkiy (335) and Hero of the Russian Federation Aldar Tsydenzhapov (339) and the missile range instrumentation ship Marshal Krylov (331).

The JMSDF monitored the passage of the ships via P-3C Orions of Fleet Air Wing 2 stationed at Hachinohe Air Base, Honshu and the minesweepers JS Izushima (MSC-687) and JS Aoshima (MSC-689), the statement said.

Previously the PLAN ships took part in the Sea Interaction 2021 exercise between the two countries from Oct. 14 to 17. A Russian defense ministry release on Monday announcing the completion of the exercise mentioned the PLAN contingent as also includes a rescue ship along with a diesel submarine. Russian naval assets taking part in the exercise as stated by the release were Admiral Panteleyev, Gromkiy, Hero of the Russian Federation Aldar Tsydenzhapov, submarine Ust- Bolsheretsk (B-494), two base minesweepers, a missile boat and a rescue tug. The two navies conducted gunfire exercises at targets simulating floating mines and surface ships, air defense training was carried out with Su-30SM fighters of the Air Force and Air Defense Army of the Eastern Military District and the helicopters of the Pacific Fleet’s naval aviation playing the role of aerial attackers stated the release and added that the final stage of the exercise, involved the ships of the two navies, with the support of anti-submarine aircraft, carrying out a joint search and blockade of a simulated enemy submarine in the designated area. The Russian Defence Ministry also released a short video of the exercise on Facebook.

The release emphasized that the joint naval drills have been a regular occurrence since 2012 and that no exercise was held in 2020 owing to the COVID-19 pandemic. The exercise has raised speculation of the two countries trying the counterbalance the intensive number of exercises in the region conducted by the QUAD partnership of the United States, Japan, India and Australia, the various multilateral exercises involving the Royal Navy’s Carrier Strike Group 21 (CSG21) with the navies of the United States, Japan, Australia, New Zealand and Canada.

During the Russian-Chinese naval drills last week in the Sea of Japan, Russia said it chased a U.S. warship out of its waters, a claim which the U.S. Navy denied, USNI previously reported.

USS Chafee (DDG-90) was conducting “routine operations” in the Sea of Japan when Russian Udaloy-class destroyer Admiral Tributs approached. The U.S. Navy said in its statement last week that Chafee was in area before the waters were closed for the drills.

Over at the Indian Ocean, the navies of Australia, Japan, the United States and the United Kingdom concluded the Maritime Partnership Exercise (MPX) 2021 in the eastern Indian Ocean held from Oct. 15-18. The U.S contingent consisted of Carrier Strike Group 1 comprising of the carrier USS Carl Vinson (CVN-70) with embarked Carrier Air Wing 2 (CVW 2), cruiser USS Lake Champlain (CG-57) and destroyer USS Stockdale (DDG-106), with the replenishment ship USNS Yukon (T-AO-202) while Japan’s contingent consist of the helicopter destroyer JS Kaga (DDH-184) together with destroyer JS Murasame (DD101) which are on deployment as part of the JMSDF Indo-Pacific Deployment 2021 (IPD21) task group. The UK’s participation consists of the main body of CSG 21 consisting of the carrier HMS Queen Elizabeth (R08), destroyers HMS Defender (D36) and USS The Sullivans (DDG-68), frigate HMS Richmond (F239), replenishment ships RFA Fort Victoria (A387) and RFA Tidespring (A136) with the Australian frigate HMAS Ballarat (FFH155) rounding out the group.

“MPX is high-end, multi-domain maritime training at its finest,” said Rear Adm. Dan Martin, commander, Carrier Strike Group (CSG) 1 in the release. “All four participating nations have enduring interests in the security, stability, and well-being of the Indo-Pacific region. We will continue to fine-tune our collective assets – speed, precision, lethality – in order to maximize our warfighting proficiency with our regional trusted partners.”

Over in South-East Asia, the nations of the Five Power Defence Arrangements concluded the Bersama Gold 2021 Exercise that began on Oct. 8 with a naval and air display off Singapore on Oct. 18 to mark the 50th anniversary of the FPDA through the UK destroyer HMS Diamond (D34) which is part of CSG 21, had to pull out of the display owing to technical issues.

The Bersama Gold 2021 exercise involved sea and air exercises in the South China Sea international waters between the coasts of Peninsular Malaysia and Singapore where serials such as anti-air and anti-submarine exercises, gunnery firings and maneuvering drills were conducted. Air forces from the FPDA member-nations exercised with each other in air serials such as air defense exercises over the airspace of Peninsular Malaysia, and support the maritime component in anti-submarine exercises

Diamond had been one of 10 ships taking part in the Bersama Gold exercise along with nine other ships and a submarine.