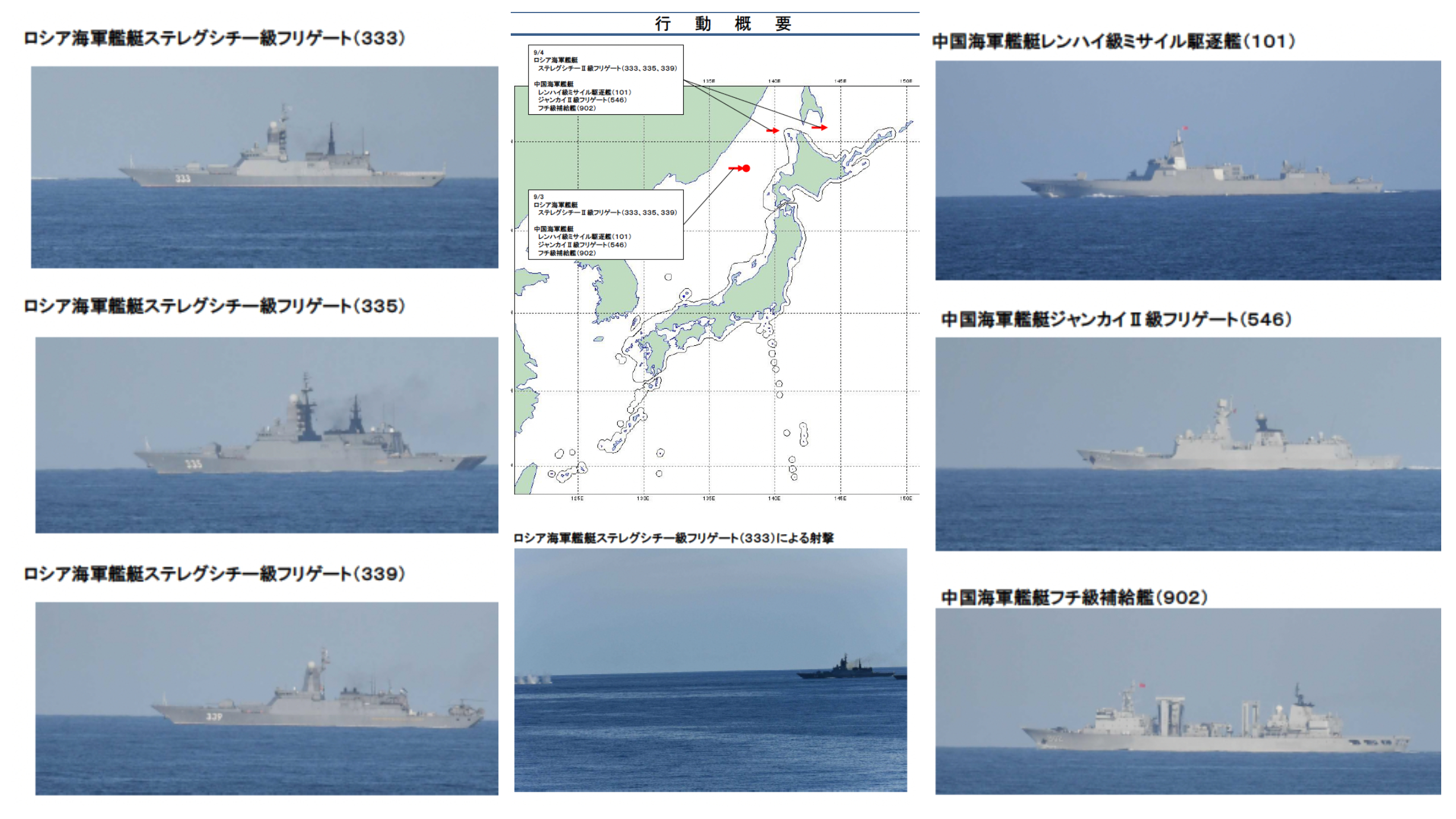 Russian and Chinese warships have been conducting drills around Japan since Friday as part of the Russian military’s Vostok 2022 strategic drills that ends on Wednesday.

In a release on Saturday, the Chinese Ministry of National Defense said the People’s Liberation Army Navy (PLAN) was taking part in the exercise with a surface action group including destroyer CNS Nanchang (101), frigate CNS Yancheng (546) and replenishment ship CNS Dongpinghu (902). The warships conducted a live fire anti-aircraft drill in the Sea of Japan on Friday, according to Japanese officials.

On Friday, a Russian corvette and a missile range instrumentation ship had been sighted in the Sea of Japan according to the Joint Staff Office (JSO) of Japan’s Ministry of Defense issued a release on Saturday. The two ships subsequently transited through La Pérouse Strait into the Sea of Okhotsk. Hull numbers and images identify the Russian ships as corvette RFS Gremyashchiy (337) and missile range instrumentation ship RFS Marshal Krylov (331). The Russian ships were monitored by the Japan Maritime Self Defense Force (JMSDF) destroyer JS Yudachi (DD-103), fast attack craft JS Kumataka (PG-827) and JMSDF P-3C Orions Maritime Patrol Aircraft (MPA) of Fleet Air Wing 2 stationed at JMSDF Hachinohe Air Base, Honshu.

The JSO issued a release stating that on Saturday, three Russian corvettes along with a PLAN destroyer, frigate and replenishment ship had been sighted sailing east in an area 118 miles west of Cape Kamui, Hokkaido. The corvettes are RFS Sovershennyy (333), RFS Gromkiy (335) and RFS Hero of the Russian Federation Aldar Tsydenzhapov (339) while the PLAN ships were Nanchang, Yancheng and Dongpinghu. On Sunday, Chinese state media released video of PLAN warships firing close-in weapons systems and refuelling underway. The ships carried out machine gun dri;ls while in the area. Subsequently on early Sunday, all six ships were sighted sailing northeast in an area 31 miles west of Rebun Island, Hokkaido and subsequently sailed east through La Pérouse Strait. The PLAN ships had been earlier sighted on Aug. 29, in the East China Sea and subsequently transiting the Tsushima Strait. The Russian and PLAN ships were shadowed by Yudachi, Kumataka and the P-3C Orions of Fleet Air Wing 2.

Outside of the naval movements, the Vostok exercise has been downplayed by British officials.

“Russia publicly claimed that 50,000 troops will take part, however, it’s unlikely that more than 15,000 personnel will be actively involved this year. This is around 20 percent of the forces which participated in the last Vostok exercise in 2018,” reads an intelligence assessment from the U.K. Ministry of Defence on Sept. 2.
“Russia’s military performance in Ukraine has highlighted that Russia’s military strategic exercises, such as Vostok, have failed to sustain the military’s ability to conduct large scale, complex operations. Such events are heavily scripted, do not encourage initiative, and primarily aim to impress Russian leaders and international audiences.”