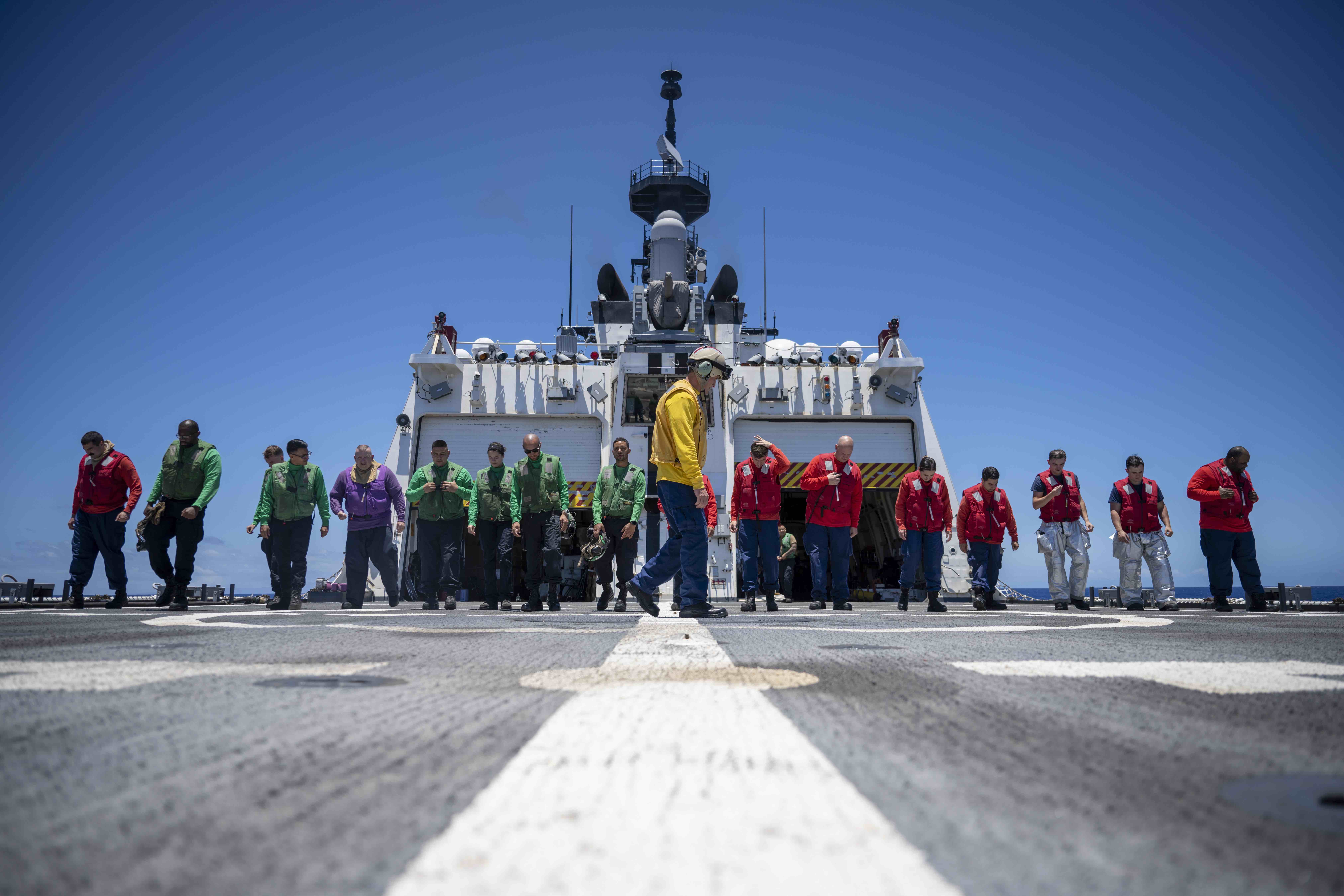 Coast Guard crew members aboard cutter USCGC Midgett (WMSL-757) and U.S. Navy Sailors check the flight deck for debris prior to flight operations as part of Rim of the Pacific (RIMPAC) 2022. US Coast Guard Photo

In her first appearance as Coast Guard commandant before the House Homeland Security Transportation and Maritime Security panel, Adm. Linda Fagan said, “the biggest issue at hand centers around people” and having the “right tools” available to recruit, retain and “serve successfully” in the Coast Guard.

She added that the other services are also facing serious recruiting challenges as the pool of eligible by age shrinks and those who meet service standards are less inclined to enlist.

Fagan added, “the red flag for me is [being told], ‘We’ve always done it this way.’”

In her opening statement, she called for greater career flexibility for Coast Guard members. In answering follow-up questions, she suggested allowing coasties to opt out of the promotion cycle for a year to remain at a particular station and then opt back in, as well as entering the service laterally as examples of that kind of flexibility.

“The heartbeat of the Coast Guard is the work force,” she said.

Fagan repeated her message on taking over as the 27th commandant in June that the most significant work lies in transforming talent management for Coast Guard members.

She told the panel, “cultural change is difficult,” and invited their support for policy changes.

On the need for a greater American presence in the Arctic, Fagan said, “I have a sense of urgency. We need to field that capability [icebreakers] as soon as possible.” Having served as commander of the Coast Guard’s Pacific Area, she added, “We are an Arctic nation.”

Fielding new heavy and medium icebreakers is an “absolute priority” because “actual presence matters,” she said. The first new heavy icebreaker to be built by VT Halter Marine in Pascagoula, Miss., is to be delivered “in mid-25.”

Fagan said the service is pursuing plans to buy a commercially-available medium icebreaker to provide increased “capability now” to supplement USCGC Healy (WAGB-20), which is now on an Arctic mission. The budget request for Fiscal Year 2023 includes $125 million to buy the vessel.

Ranking member Rep. Carlos Gimenez, (R-Fla.) said he wished all the services would look at commercially available equipment to “speed things up” in needed procurement. He said all too often they fall into “over-engineering” something needed immediately, raising costs and delaying fielding.

She told the panel Russia now fields “something north of 40 icebreakers” with different capabilities and is the largest Arctic nation. China has two ice-capable research vessels and describes itself as a “near-Arctic nation.”