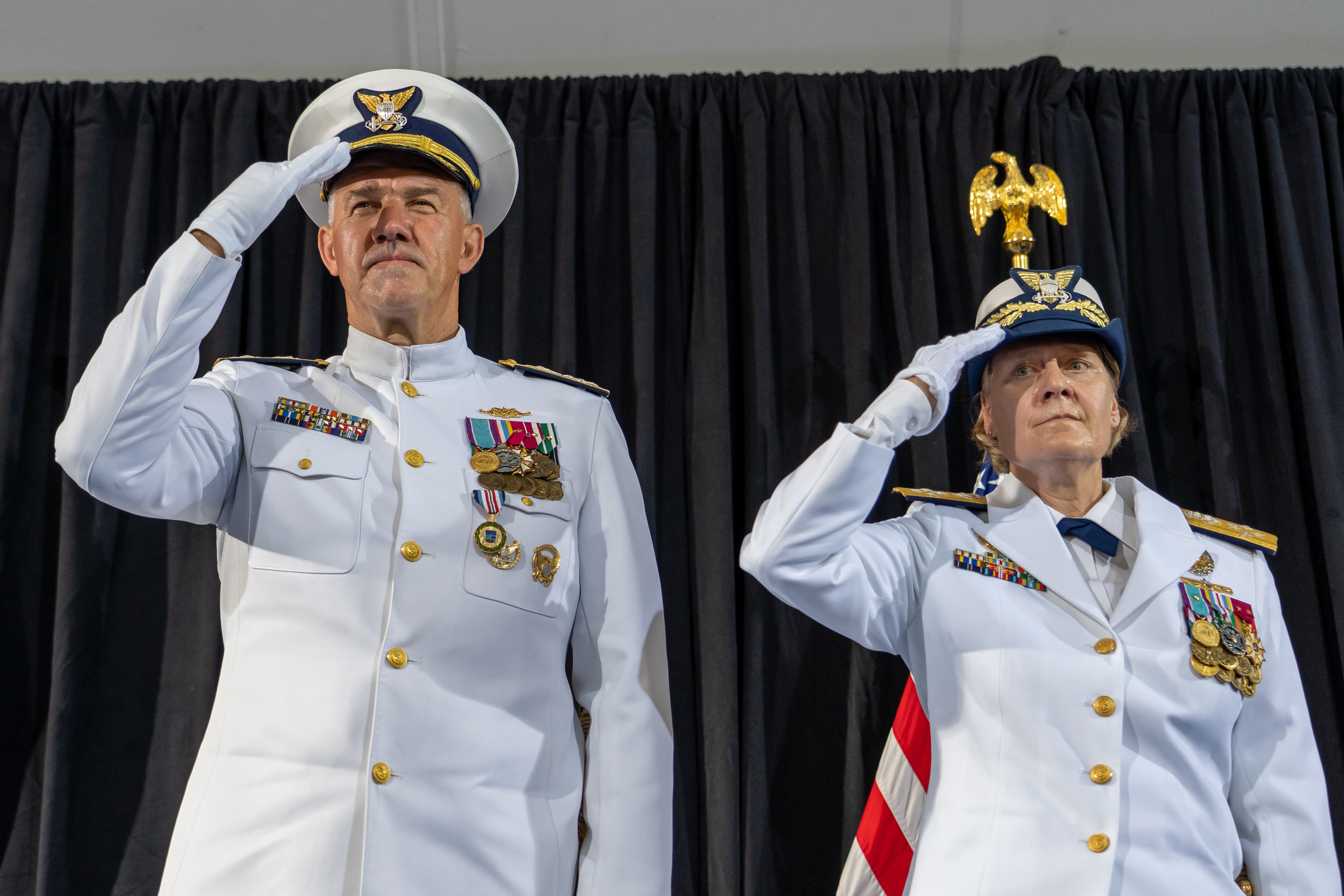 Adm. Linda Fagan relieves Adm. Karl Schultz as the 27th commandant of the Coast Guard during a change of command ceremony at Coast Guard headquarters June 1, 2022. US Coast Guard Photo

Adm. Linda Fagan pledged her “highest priority as commandant will be to transform our policy management system” in remarks following her swearing in as the 27th leader of the Coast Guard and the first woman to lead a branch of the armed services.

Speaking Wednesday at the change-of-command ceremony in Washington, D.C., she said, referring to the men and women serving in uniform in the Coast Guard and the service’s civilian employees, “without you, steel doesn’t move.”

Fagan, who served as vice commandant since June 2021, said during her tenure as commandant she intended to give them “policy, training [and] support to succeed” as the Coast Guard modernizes its cutters, boats, aircraft and shore facilities.

Having graduated as one of 16 women from the Coast Guard Academy in 1985, Fagan added, “There has never been a more exciting time to be in the Coast Guard. …The pace of change creates challenges.”

President Joe Biden said at the ceremony the Coast Guard will be called on to play “an increasingly prominent role” in maritime security. He added the nation’s leaders “will be calling on the Coast Guard more” for a wide array of missions.

Those missions in the past two years ranged from marine safety on inland waters, COVID-19 response, humanitarian aid following natural disasters such as Category 5 hurricanes, and enforcing drug and fishing laws and regulations domestically to assisting other nations in their maritime security efforts.

Biden noted one effect of climate change was the warming of Arctic waters, making it “a potential region of conflict” as it becomes more open to commercial shipping, tourism, mineral exploration and energy development.

One of the service’s highest shipbuilding priorities is the expansion of the icebreaking fleet from two now to six, a mix of heavy and medium cutters. 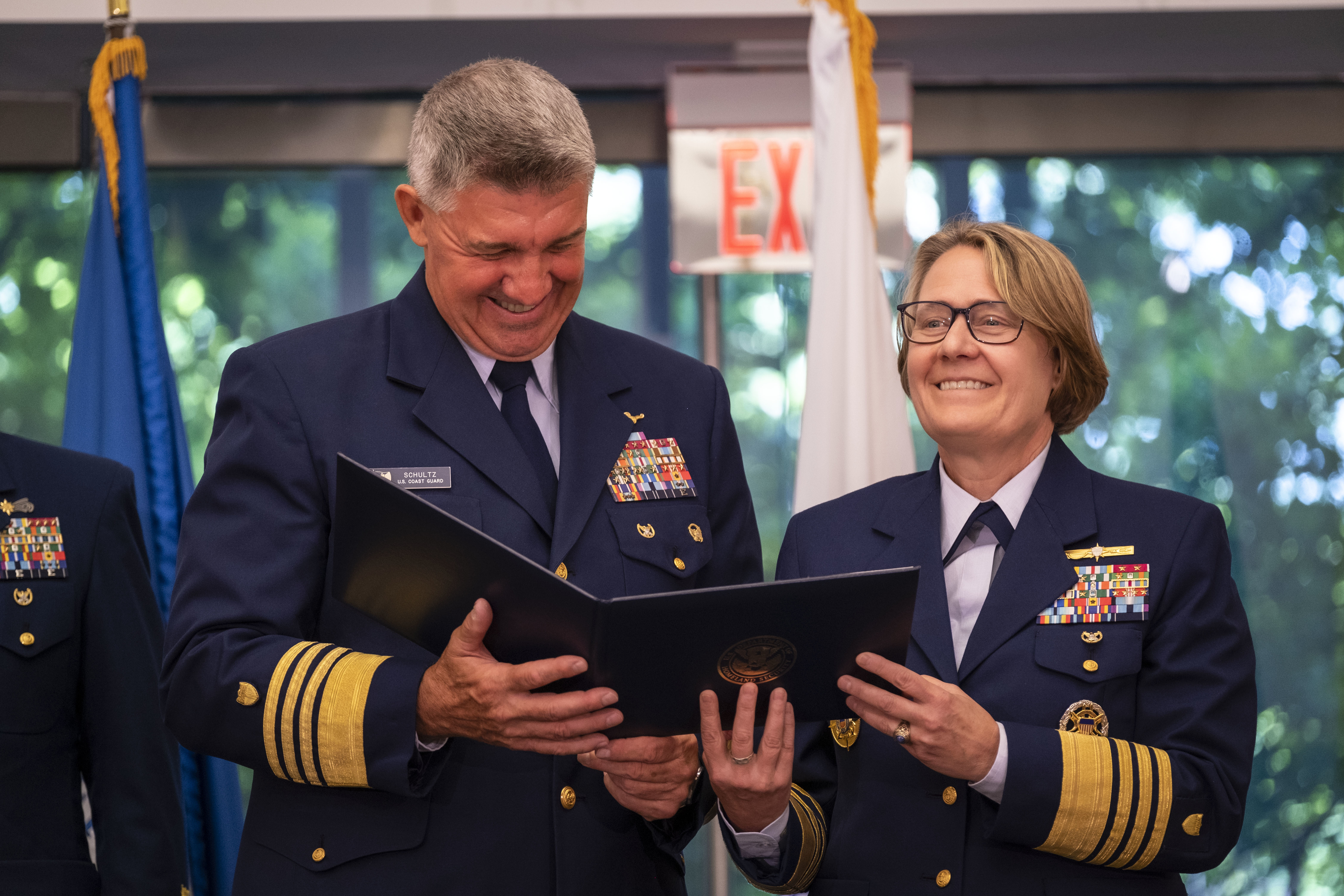 “It’s about time” that a woman led one of the armed forces, the president said. He added that the confirmation of Fagan as commandant shows that “no doors are closed to women” in services.

At the ceremony where she succeeded retiring Adm. Karl Shultz, Fagan praised the 15th commandant, Adm. Owen Siler for “having the courage to integrate the service academies,” allowing women entry. “I’m wearing his shoulder boards” today. She added that as a 16-year-old she informed her parents she intended to attend the Coast Guard Academy.

Noting her achievements, Homeland Security Secretary Alejandro Mayorkas said in his remarks Fagan had recently received the Golden Ancient Trident as the officer with the longest service in the Coast Guard’s marine safety program.

Biden said 40 percent of today’s enrollment at the Coast Guard Academy is female. “Now we need to keep working … to make sure women are not penalized for having children,” but remain in the service and keep being promoted.

“But we need to make some of that same progress in our enlisted ranks — and not just women, but underrepresented minority males,” he added.

Coast Guard figures show about 15 percent of its active-duty force is female.

At the ceremony, Mayorkas commended Schultz for spearheading a more than 20 percent increase in the Coast Guard budget along with “the largest shipbuilding effort since World War II.”

In his remarks, Schultz said, “we’re a learning organization striving to be more diverse and representative of the great nation that we serve.” He added, “to be the world’s best, we must also be the world’s most inclusive.”