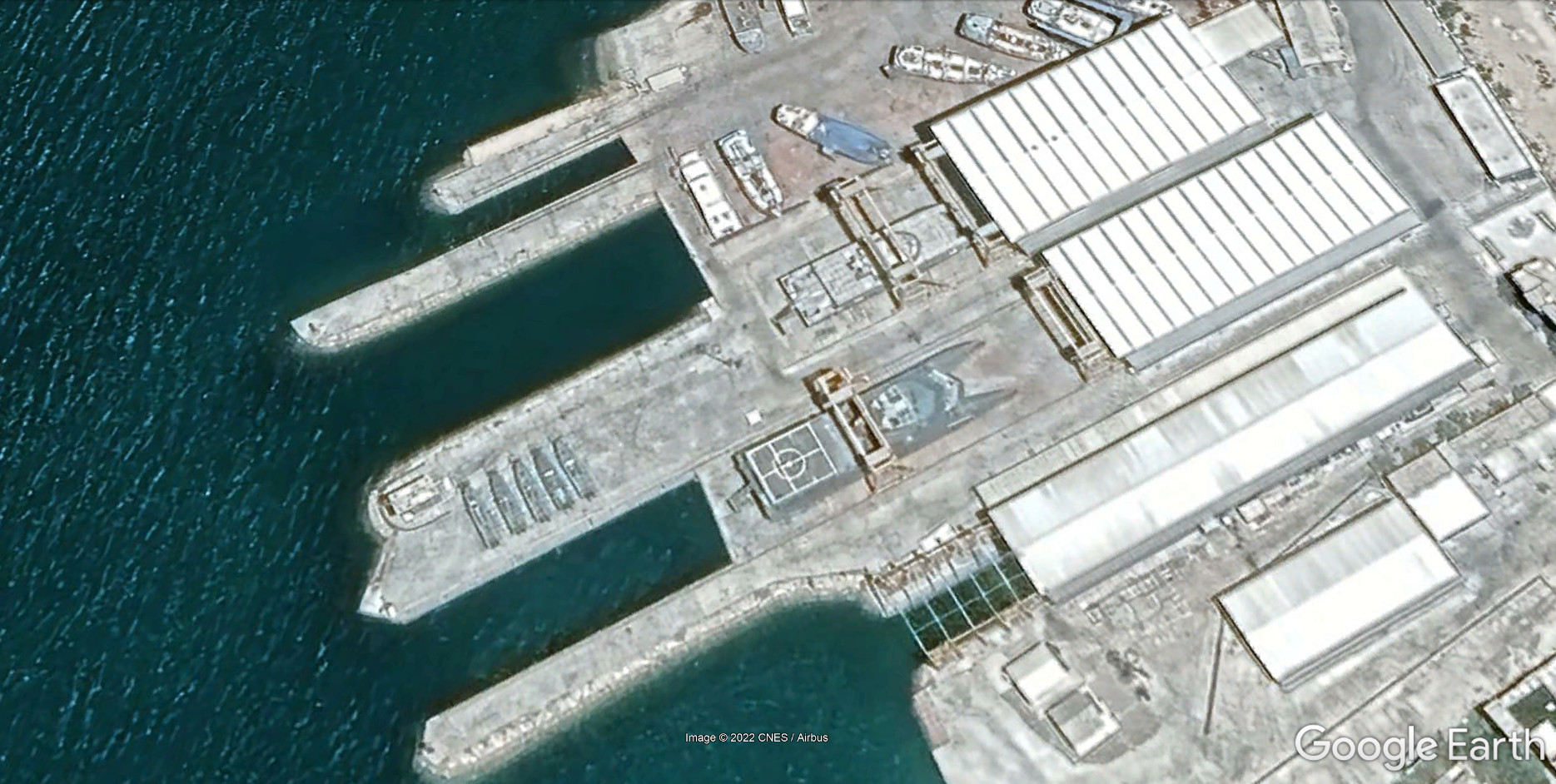 A new vessel has been observed under construction in Iran, according to satellite imagery.

The unidentified catamaran is characterized by a clean-angled form, appearing stealthier than earlier types, and could be a missile boat.

It is located at Qeshm Madkandaloo Shipbuilding Cooperative Co. shipyard on the island of Qeshm and is visible in Airbus commercial satellite imagery shared publicly on Google Earth.

The new boat is seen next to another new missile catamaran, a Shahid Soleimani-class missile corvette. This is also a stealth-influenced design, appearing generally modern. The new type bears some similarities in overall form but is noticeably smaller. It measures about 166 feet, or 150 meters, long and 46 feet, or 14 meters, across.

The new vessel appears to lack the helipad that the Shahid Soleimani-class has, but it’s currently unfinished, so it’s difficult to assess the final fit. It does have two cut-outs in the aft deck that are indicative of pop-up missile tubes. These are likely for 4-8 Noor or Qader anti-ship missiles, which are Iranian derivatives of the Chinese C-802 family of sea-skimming missiles, roughly equivalent to the famous Harpoon and Neptune types. 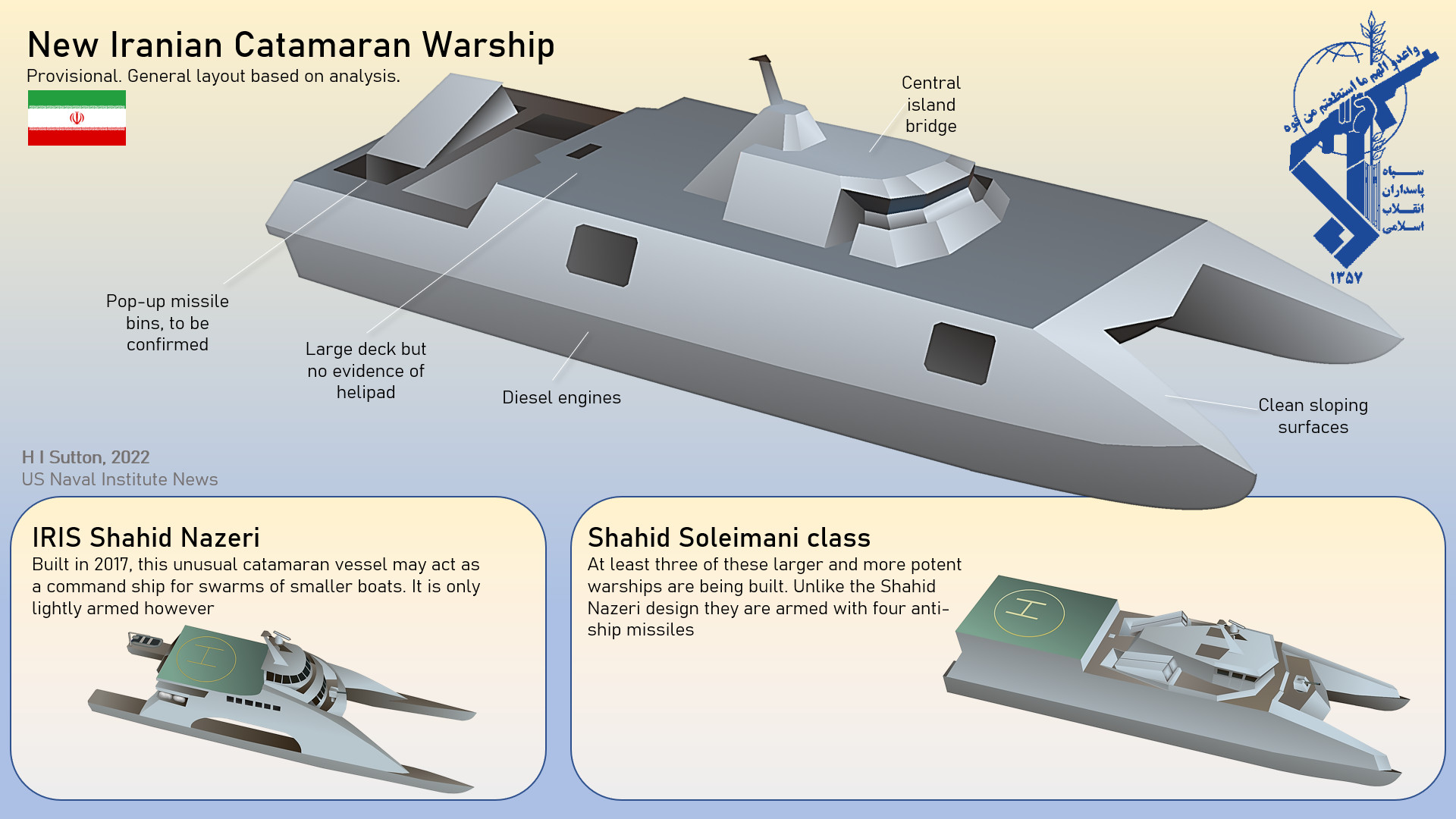 Given the shipyard involved and proximity to the Shahid Soleimani-class missile corvette, the new vessel is likely under construction for the Islamic Revolutionary Guard Corps. The Islamic Revolutionary Guard Corps – Navy (IRGC-N) is a distinct naval service, separate from the regular Navy, or the Islamic Republic of Iran Navy (IRIN). While still commonly associated with lightly armed speed boats and other novel craft, the IRGC-N is modernizing. And it’s increasingly building vessels that rival the regular navy.

These ships include the Shahid Soleimani-class, which was first reported by Naval News in March 2021. Three of these are known to be under construction, each at a different yard, but they have yet to enter regular service. They combine a sleek catamaran hull, tested on the IRIS Shahid Nazeri, with modern-angled sides. Their overall form suggests efforts to reduce their radar signature. But their main armament remains typical, consisting of four of the ubiquitous C-802 missiles.

The new vessel appears to be designed for increased stealth, although its final form is not yet visible.

These missile boats offer more conventional capabilities than the myriad of small boats operated by the IRGC-N. They could operate as command vessels for swarms of smaller boats armed with rockets, torpedoes, mines, lightweight anti-ship missiles and drones. They could also operate independently, offering a longer-range arm of the IRGC. Either way, the two new types of catamaran are likely to spearhead the IRGC-N’s modernization.

While Iran struggles to build larger warships and incorporate modern weapon systems, it continues to innovate and modernize in other fields. Its ballistic missiles are treated with respect, as are its drones and cruise missiles. Iran can build submarines and, now, modern missile corvettes.

Discovery of the new catamaran under construction follows recent maritime interactions between the United States and IRGC-N in the region. 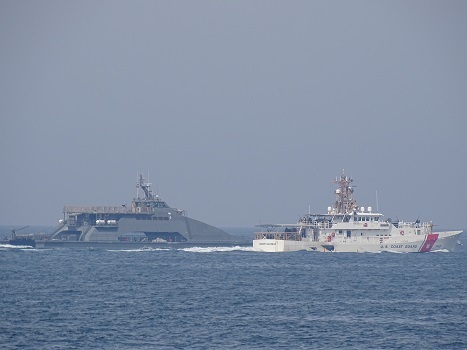 Meanwhile, in March, three IRGC-N ships had an “unsafe and unprofessional” encounter with several U.S. Navy and Coast Guard vessels, according to U.S. 5th Fleet.