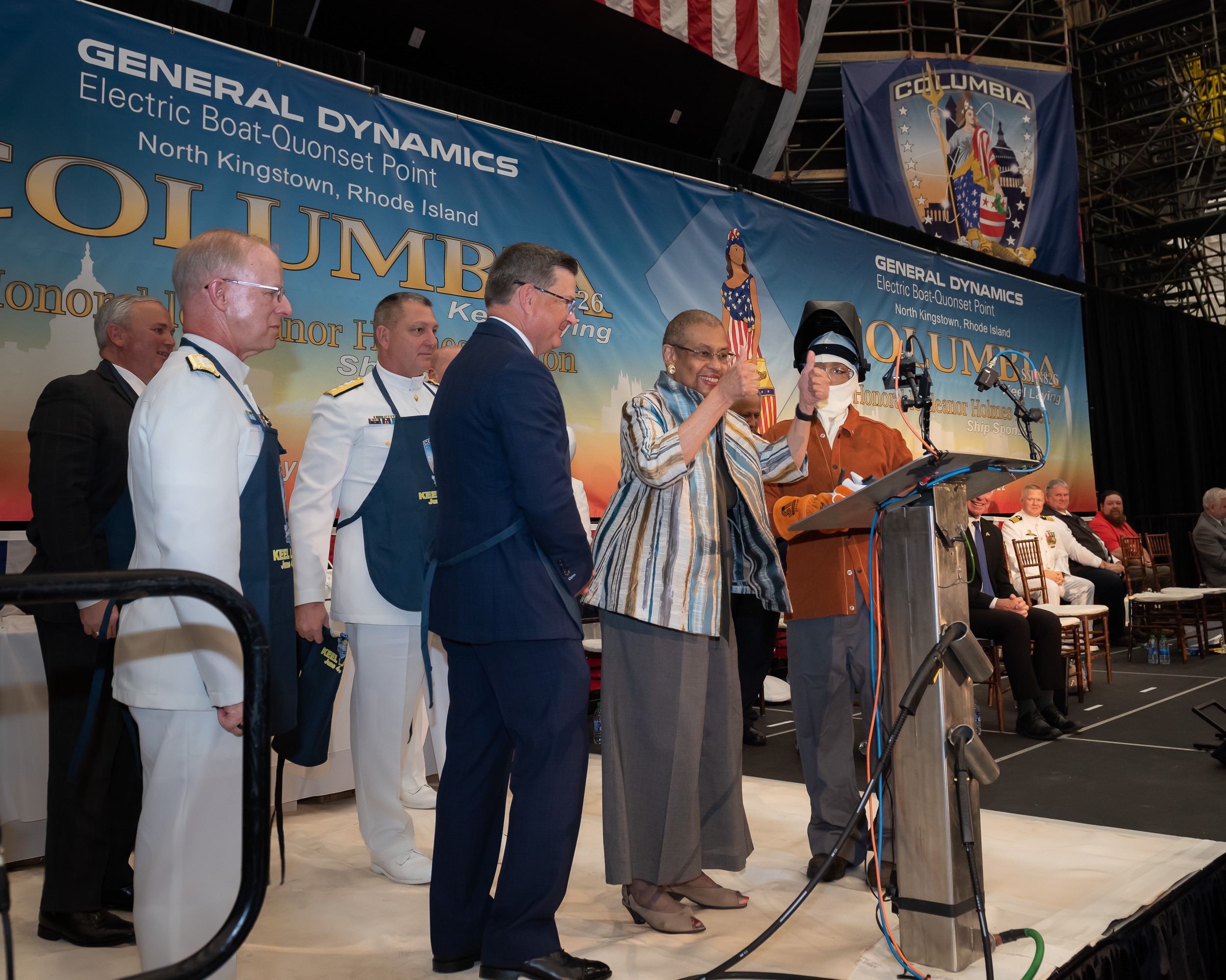 Eleanor Holmes Norton (D-D.C.) approves the welding of her initials onto a metal plate at a ceremony at the General Dynamics Electric Boat Facility at Quonset Point, Rhode Island, on June 4, 2022. EB Photo

After inspecting the engraved plate with her welded initials, Rep. Eleanor Holmes Norton (D-D.C.) declared the keel laid for the future USS District of Columbia (SSBN-826).

The ceremony marks the ceremonial construction start of the first in a new class of ballistic missile submarine that’s expected to commission in 2027.

“Though this is not the first time a U.S. Navy vessel has been named Columbia, this is the first time that the name has been used to specifically commemorate the District of Columbia. The Columbia class will be the largest, most capable and most advanced submarine produced by our nation,” Norton said in her remarks during the ceremony.

Norton added the district is home to about 30,000 veterans now and almost 200,000 D.C. residents have served in the armed forces since World War I.

It was appropriate, “the Navy would be recognizing the people of the District of Columbia,” she said.
“It is fitting that it recognizes what will become the 51st state.”

Building the 12 boomers in the Columbia-class has been the Navy’s top priority for the last decade. Preliminary design work on the 520-foot long, 20,000-ton ballistic missile submarine started in 2007. The class will replace the Ohio class ballistic missile submarines as the nation’s number one strategic deterrent starting with District of Columbia’s first patrol in 2031.

The Columba-class will carry “70 percent of America’s deployed nuclear arsenal,” Navy Secretary Carlos Del Toro said at the ceremony at Electric Boat’s Quonset Point facility in Rhode Island. He added the ballistic missile submarines are “the smartest investment we can make” to secure the American public, 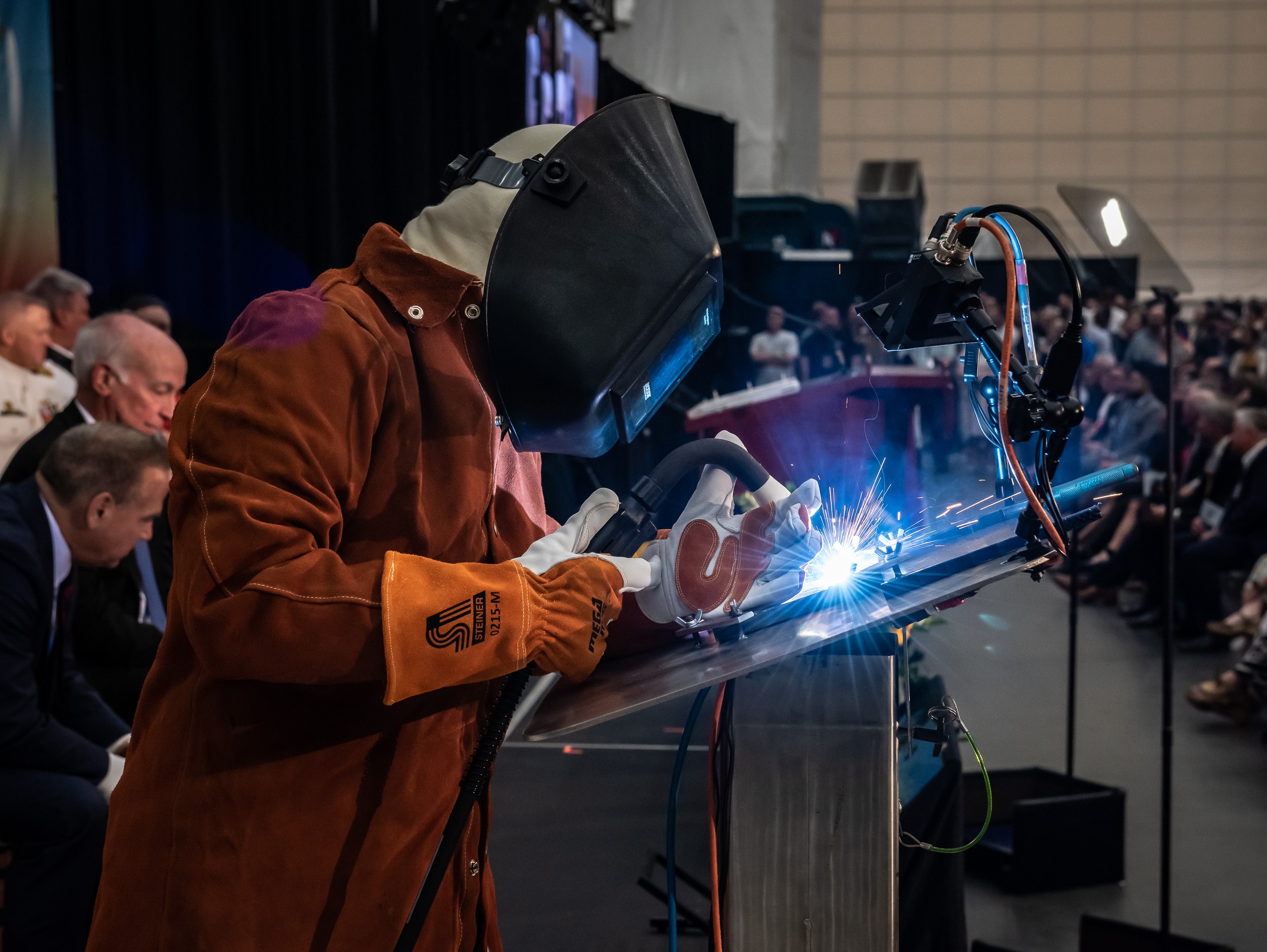 Welder Maria Betance-Pizarro welds the initials of the sponsor of the future U.S. Navy ballistic missile submarine District of Columbia, Congresswoman Eleanor Holmes Norton (D-DC), onto a metal plate at a ceremony at the Electric Boat facility in Quonset Point, Rhode Island, on June 4, 2022. EB Photo

Electric Boat president Kevin Graney added, District of Columbia is expected to “serve well into the 2080s” and will never have to return to a shipyard for nuclear refueling.

In March, USNI News reported the $110 billion Columbia program and the Virginia Payload Module hull module are refining modular techniques EB developed to build the early Virginia-class submarines to maximize the efficiency of assembling the complex hulls under a timeline with razor-thin margins.

Also like the Virginia-class, Electric Boat is pairing with Newport News Shipbuilding in the submarines’ construction. Jennifer Boykin, president of HII’s Newport News Shipbuilding, said the work “raised the bar on size and scope” of submarine’s modular construction. The bow and stern modules for District of Columbia will be transported by a specially-built ocean-going barge from Virginia to Electric Boat’s facility at North Kingstown, R.I.

In 2016, then Navy Secretary of the Navy announced the first in the new class of boomers would be called Columbia after D.C., reported USNI News at the time.

On Friday, Del Toro announced the first boat would officially add “District of” to the name in order to avoid an overlap in names with the existing USS Columbia (SSN-771). The Los Angeles class attack boat , named for cities in South Carolina, Illinois and Missouri, was also built at Electric Boat and commissioned in 1995. The current Columbia was originally set to leave the fleet before District of Columbia was to commission but is set to see a service life extension, USNI News understands. 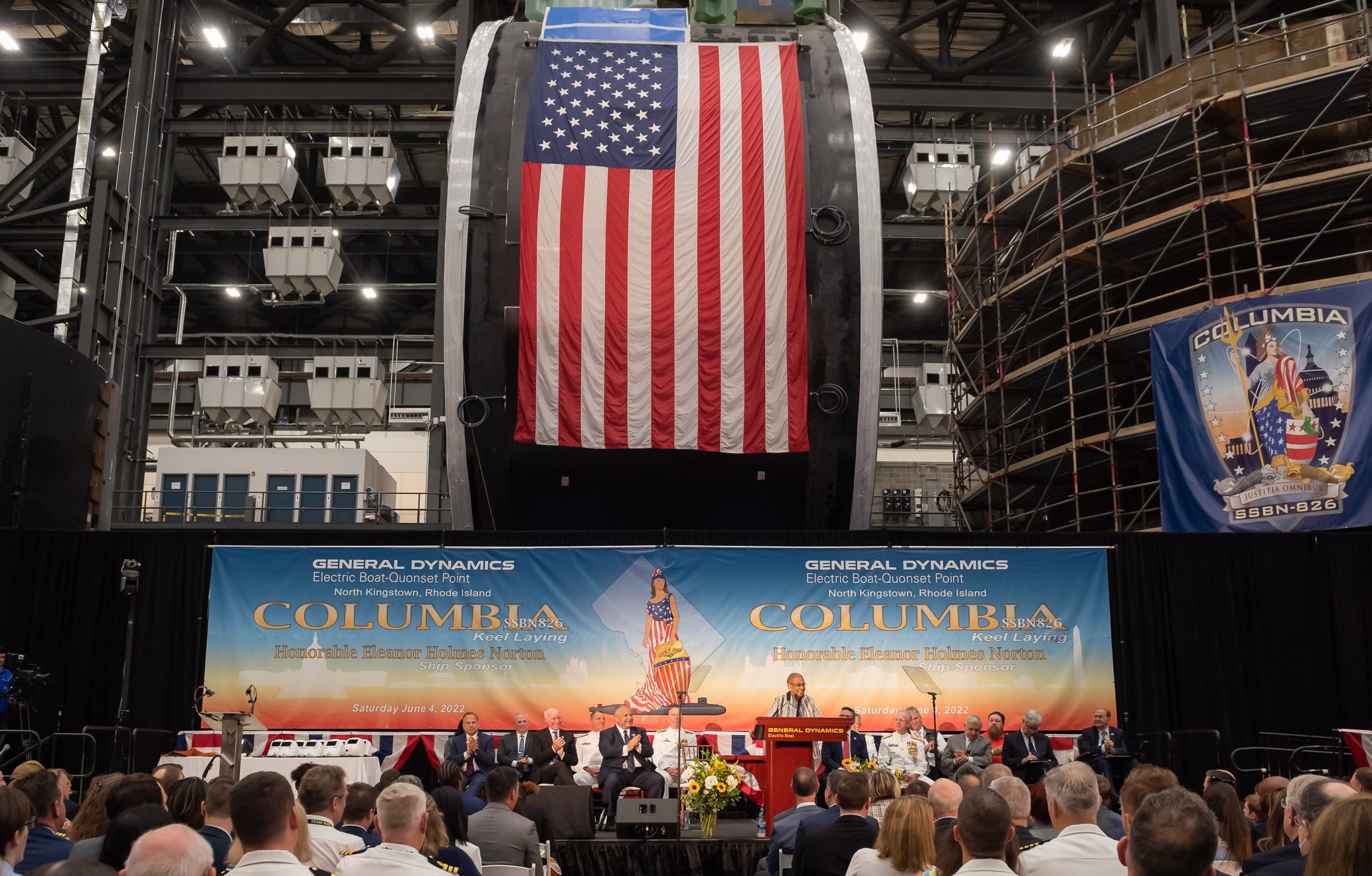 While the name Columbia for a U.S. ships and aircraft is not new – at least eight U.S. ships, a Space Shuttle and the Apollo 11 command module have all shared the name – it will be the first time the name has been used to commemorate the U.S. capital.

“The District of Columbia is rich with naval history. The Washington Navy Yard is our oldest shore facility… Marines like Montford Point Marine Herman Darden and Brigadier General Anthony Henderson and sailors like Yeoman Charlotte Louise Berry Winters and Medal of Honor Recipient First Class Fireman John Rush were born and raised in D.C.,” Del Toro said.
“This is why I prefer to call D.C., not just our nation’s capital, but instead, our naval capital.”