Iran “wants some type of agreement” over its nuclear program as a way to lift sanctions on the regime, but Tehran views its ballistic missile arsenal “as their crown jewels” not to be bargained away, the senior American commander in the Middle East said Thursday.

“Iran remains the central threat” in the Middle East through its use of proxies such as the Houthis in Yemen, McKenzie said. The Houthis are demonstrating the other side of the threat from Iran, sophisticated long-range fires, by launching missile attacks on Saudi Arabia and the United Arab Emirates in a “brutal civil war” now in its seventh year.

McKenzie said it was critically important that the Gulf States develop integrated air and missile defense systems, which has proven an elusive goal for years. “It’s not going to be easy.” On a positive note, he said he welcomed the return of Qatar into the broader security picture in the Middle East and the country’s designation as a major non-NATO ally.

Earlier this year, the other Gulf states ended their three-year embargo on Qatar, which hosts a major air base used the by the United States to counter ISIS moves in Iraq and Syria. It also is the forward headquarters of U.S. Central Command. 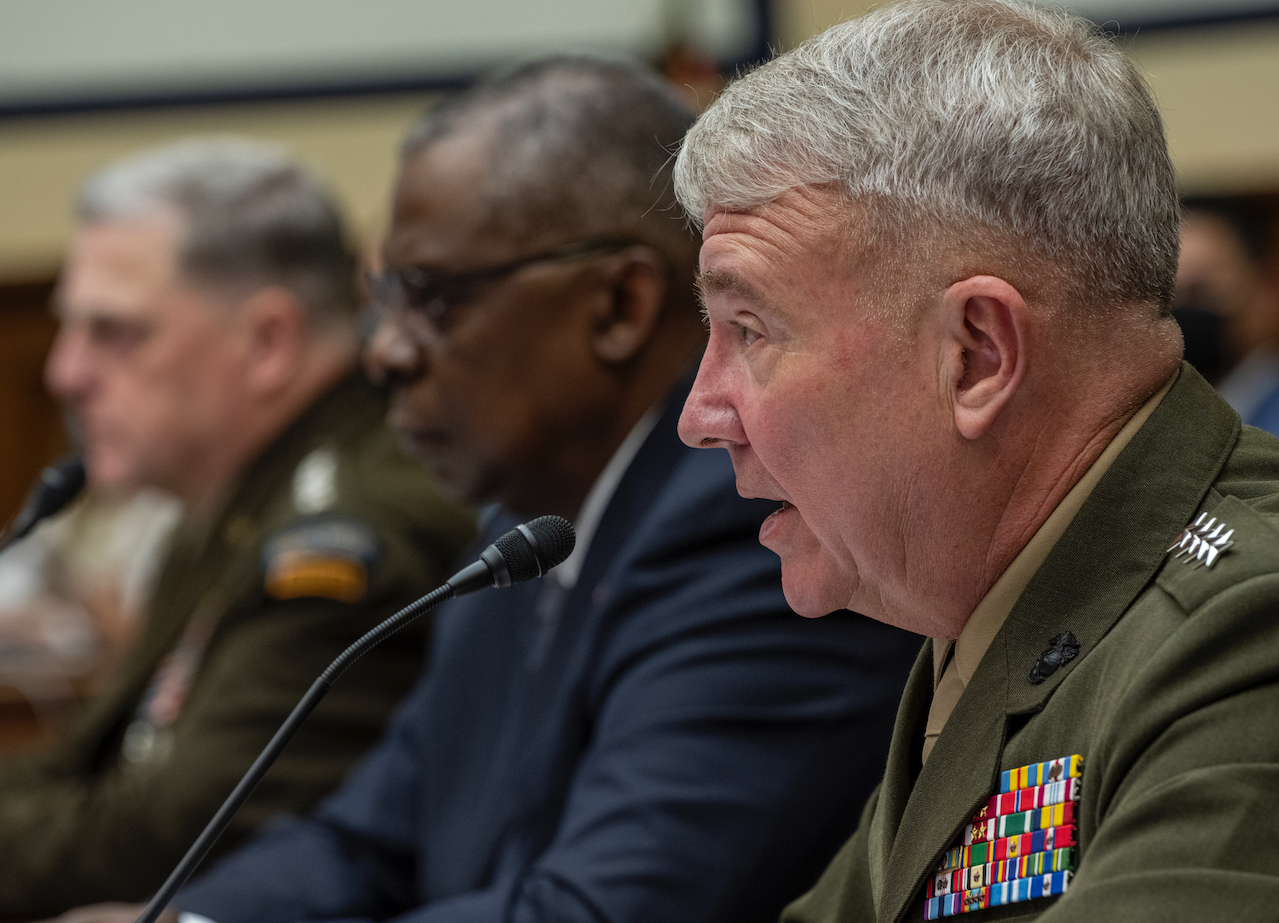 He added that the United States and allies and partners are in “a state contested deterrence” with Iran. Nearing the end of his tour at Central Command, McKenzie said Iran has chosen Iraq as its battleground with United States. The goal is to drive American forces out of Iraq and the region with “reckless attacks” on bases where U.S. forces are stationed.

McKenzie said the recent agreement between Washington and Baghdad for American forces to remain present in Iraq but not in a combat role blunted that goal.

“Iran is now assessing its options” in Iraq and Syria and the Arabian Peninsula. McKenzie said Tehran has the “established habit of ordering a little bit of everything off the menu” to expand its influence as a regional power. That includes recent joint exercises with Russian and Chinese naval forces.

Several times during his address and in answering questions, McKenzie stressed the continuing importance of the Middle East in an era of great power competition. He said the region remains vital to China for energy and also provides a base to expand its Belt and Road Initiative for infrastructure westward. For an “opportunistic” Russia, Syria offers a warm water port and other nations are potential markets for arms sales.

McKenzie said part of his duties as commander is to maintain strong military-to-military relations across the region. These relationships are important in U.S. military equipment sales so allies and partners can work more closely with the U.S. on their security. Relations are further strengthened by inviting their senior officers to advanced American military schools and sending U.S. officers forward to train and work with different allies.

“Everybody wants to go to school in the U.S,” he said.

On Afghanistan, he said keeping tabs on terrorist organizations there since the Taliban took over “is hard but not impossible” with an over-the-horizon counterterrorism campaign.

Of immediate concern to McKenzie is what is happening in the sprawling refugee camps near the Syrian border with Turkey and in Turkey itself. ISIS uses the camps to recruit new fighters and also to intimidate residents, he added.

“The rate of repatriation” of the millions of Syrian refugees is far too lethargic. … They have no place to go” other than the camps. “This is not a military problem yet.” He added a similar situation exists in Yemen’s refugee camps.

“The danger has not passed” from ISIS, even following last week’s death of the group’s leader, Ibrahim al-Hashimi al-Qurayshi, when he refused to surrender to American special forces. ISIS’s “desire to harm us” remains. The organization has a history of re-constituting itself after its leaders are killed or the group suffers battlefield loses, McKenzie said.

The ISIS leader died in a massive bomb blast rather than surrender to American special forces during an early morning raid Thursday on a three-story residence in northwest Syria, President Joseph Biden said in a White House briefing.

Biden and McKenzie said al-Qurayshi died when he exploded a bomb that killed himself and members of his family. McKenzie described the bomb as a “a major explosive.”

The exact number of casualties in the raid from the blast, a firefight inside the residence and nearby is not clear. McKenzie and the Pentagon estimated those deaths, including children, at nine. Other estimates on the scene said possibly more than 13.

McKenzie said ISIS was responsible for the non-combatant deaths when the U.S. special forces made the offer to surrender peacefully. He and Defense Secretary Lloyd Austin added that a review of what transpired in the raid in Idlib Province would “look at the possibility our actions may also have resulted in harm to innocent people.”

“There were no U.S. casualties” in the raid conducted by about two dozen special forces, accompanied by helicopter gunships, armed MQ-9 Reaper unmanned aerial systems and attack jets, Biden said. The Pentagon said the raid was carried out on an almost moonless night in Atmeh, near the Turkish border with Syria.

McKenzie termed al-Qurayshi’s decision to kill himself as “a cowardly death.”

McKenzie described al-Qurayshi as a leader “far more interested in detailed planning, an operator” than his predecessor, ISIS founder Abu Bakr al-Baghdadi, who also killed himself in a bomb blast rather than surrender during a 2019 raid near the location of Thursday’s action.

Austin said in a statement that al-Qurayshi “provided near-constant operational guidance to ISIS fighters, to include the prison break and attack at Hasakah and the slaughter of Yazidis in Iraq. He is now off the battlefield and out of command, and cannot threaten any more lives.”

There were an estimated 500 casualties in the week-long counter-attack conducted by Kurdish-led Syrian Democratic Forces to retake the prison in late January. Pentagon spokesman John Kirby said last week that the U.S. provided limited air strikes and some ground support in the fighting to control the prison. The prison also housed teenage boys receiving training from ISIS.

On what’s next with ISIS, McKenzie said, “they’re an organization that needs a leader” to carry out its ambitions in Iraq and Syria and also to strike the U.S. and Europe. “I think you’re going to see a continual devolvement” into regional groups, such as ISIS Khorasan in Afghanistan and others in Africa’s Sahel, he said.

These smaller, dispersed terrorist groups “are harder to see,” in “ungoverned and under-governed space” in countries like Afghanistan, he added. “The Taliban will regret opening the prisons” and setting ISIS fighters free.