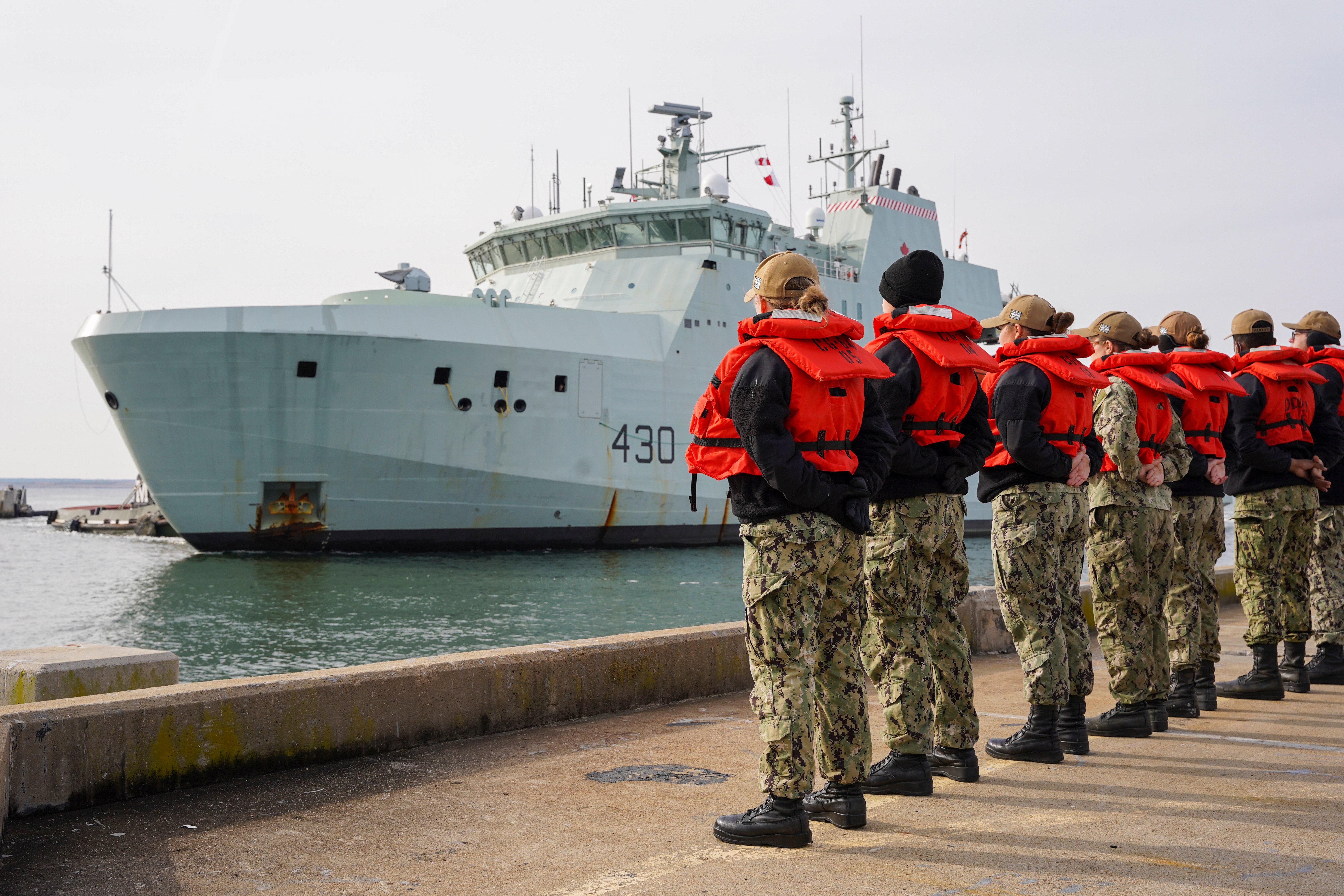 Canada’s newest Arctic and offshore patrol ship stopped in Virginia last week after finishing a circumnavigation of North American for its first deployment.

During the visit, the commander of HMCS Harry DeWolf‘s (AOPV 430) jokingly boasted that it sailed from Halifax, Nova Scotia through the Northwest Passage to Vancouver, British Columbia “on one tank of gas.”

“We have to be able to go north and operate in the North in the dead of winter,” he said at a press conference on Friday to secure Canada’s territorial claims in Arctic waters and defend its far north. Gleason added that Harry DeWolf, the first ship of six in its class, also will support other government agencies like the Royal Canadian Mounted Police in law enforcement for climate researchers and scientists in their work in the region.

The ship “wasn’t just driving through the Northwest Passage for driving’s sake,” Gleason said. He said the traverse provided valuable training for the 65-member crew in icebreaking and operating in distant waters.

Gleason previously told the Canadian Broadcasting Corporation the route in the Northwest Passage he followed was that of the doomed 1845 Sir John Franklin’s expedition. In that interview, he said he wanted the crew “to walk in their footsteps, as it were, and to see where the Franklin Expedition wintered over.”

It also gave Gleason a chance “to talk about Franklin’s decision points [and] where they may have been successful if he had made some different decisions.” Franklin and 127 other members of the two-ship expedition died in the attempt sail through the Northwest Passage.

The scope of the maiden voyage, which will conclude in Halifax before Christmas, also provided a test for the Irving Shipbuilding designers in ensuring Harry DeWolf could provide warmth for the crew in berthing spaces as well as engineering space while operating in the Arctic and cooling those same areas when it was in the eastern Pacific, transiting the Panama Canal and sailing through the Caribbean.

On this four-and-a-half-month voyage, Gleason said the ship carried a four-member RCMP detachment aboard and made a number of port calls in the Canadian Arctic to show citizens there of Ottawa’s commitment to them. When the vessel was participating in anti-narcotics operations after sailing south in the Pacific, U.S. Coast Guard law enforcement detachments were aboard.

They were not the only U.S. service members aboard.

From the start of this circumnavigation of North America, U.S. Navy Lt. j.g. Kyle Luchau served as a liaison officer on Harry DeWolf.

At the briefing to press in Norfolk, which was broadcast online, he noted that sea-shipping containers aboard Harry DeWolf, not usually carried on warships, can be used as laboratories for science and researchers studying changes in the Arctic.

Gleason added that at all times the ship will have two containers loaded for humanitarian assistance and disaster relief to respond to emergencies when called upon.

Gleason said early on there was a key training scenario of responding in a mass casualty scenario. In it Harry De Wolf  worked with the U.S. and Canadian coast guards and naval vessels in treating and evacuating the injured aboard and taking them ashore.

On this mission to the North, Gleason said the containers had a real-time military mission. They “were used as underwater listening devices” for submarines. “Fortunately, we didn’t find any.”

The Operation Nanook 2021 transit of the passage started Aug. 3 and ended Sept. 12.

“This ship is versatile,” Canadian Air Force Maj. Gen. Paul Ormsby, Ottawa’s defense attache in Washington, added at the Norfolk event. He said Harry DeWolf, commissioned in June, is capable of operating year-round in the Arctic for missions ranging from anti-submarine warfare to emergency management and search and rescue. The Canadians expect the class to also patrol off Canada’s coasts and work with the United States and other allies and partners in blue-water operations like NORAD maritime security and the anti-narcotics Operation Caribbe.

“I don’t have to chase down drug runners” with the host ship, Gleason said. He was recounting the seizure of 5,700 pounds of cocaine in the eastern Pacific that used two multi-role rescue boats Harry DeWolf carries to make the stop and arrests. The boats are capable of sailing at 35 knots and have C6 gun mounts in place with over-the-horizon navigation equipment and shock absorbers for these missions. He added unmanned aerial systems were also used in the counter-narcotics operations.

“We wrote new doctrine” in how to conduct anti-smuggling operations for the Canadian armed forces.

Martin Loken, deputy head of the mission at the Canadian embassy in Washington, said in Norfolk that “40 percent of our land mass” is in the Arctic. Although Ottawa does not see the Northwest Passage now as a transit rival to Russia’s Northern Sea Route because of its more severe icing, he noted “Canada’s north is warming three times faster” than the global average.

All these issues and security at a time of heightened tensions with Russia over Ukraine will be discussed with U.S. counterparts this week in Washington, he said.

“Every little thing I planned to execute went right to the letter,” Gleason said, praising his crew.

DeWolf, named for a Canadian naval hero of World War II, is slightly under 340 feet long and has a beam of just over 62 feet. The class will be bigger than the frigates that are the mainstays of the Canadian surface fleet. It carries a crane to facilitate the movement of containers and other cargo on and off the ship. The ship also has a vehicle bay to carry trucks, all-terrain vehicles and snow mobiles for operations on land in Canada’s Arctic. It also has a hangar bay for helicopters.

Gleason said that in open water, Harry DeWolf can maintain speeds of 17 knots. It is the first Canadian Navy warship built with icebreaking capabilities since the 1950s.