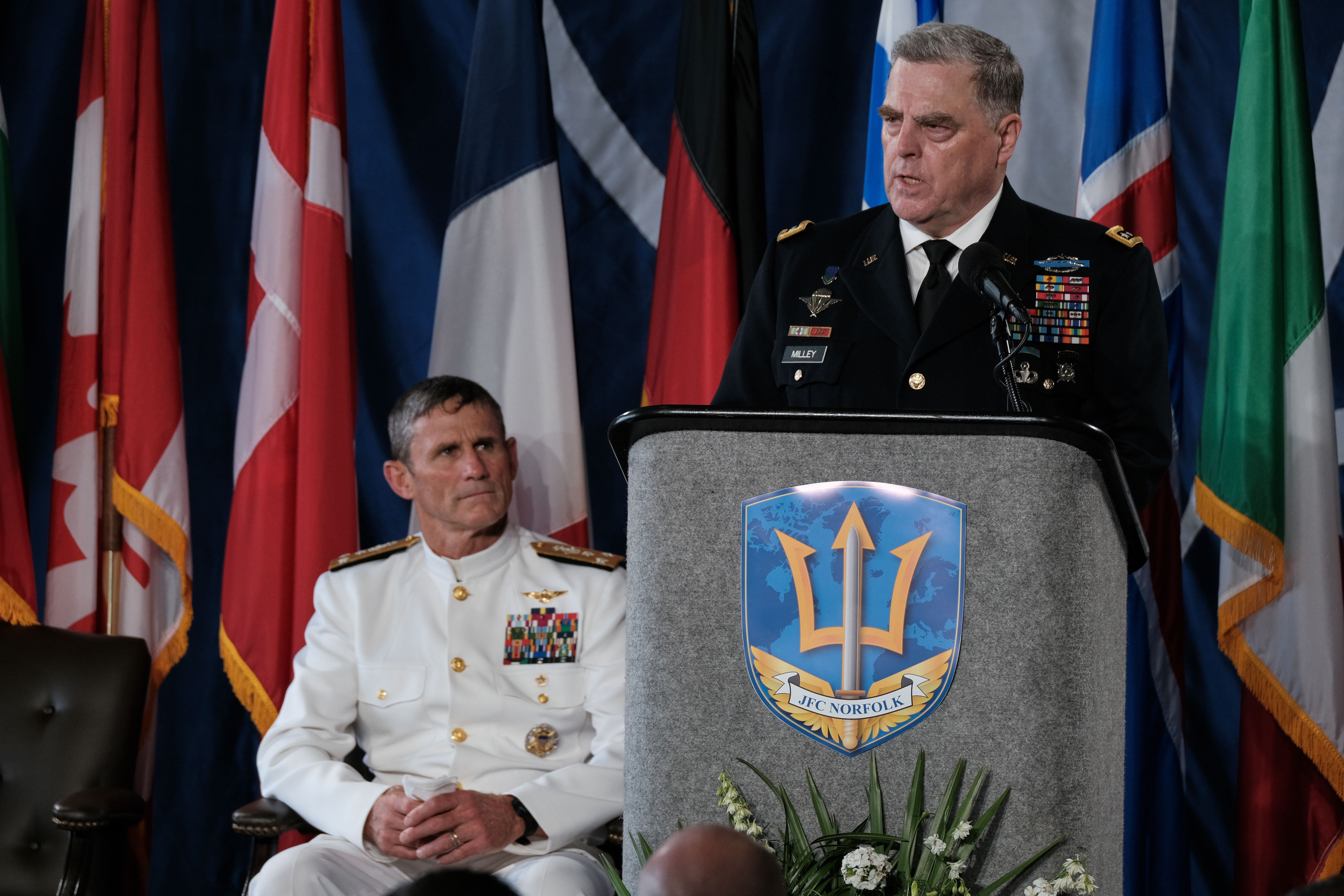 The chairman of the Joint Chiefs of Staff said this week that the United States and NATO are “right in the middle” of a technological revolution – from ubiquitous surveillance to fielding long-range precision munitions – that will fundamentally change “how we fight.”
Speaking at Thursday’s ceremony marking NATO’s Joint Forces Command Norfolk reaching full operational capability, Army Gen. Mark Milley said the international order that has preserved the peace since World War II “is under great and growing threat” from great powers like Russia and China. The threat is compounded by other nations with aggressive regional ambitions and terrorist and transnational criminal organizations.

The great danger is these powers harnessing 40 to 50 revolutionary technologies for their use as Germany did in the 1930s with mechanization, aviation and communications. The results: the Nazis were able “to overrun Europe in 18 months,” he noted.

“The same thing is happening today” as competitors adopt new technologies and hold to a doctrine of undermining the international order, Milley said at the ceremony held on USS Kearsarge (LHD-3).

Without democracies modernizing forces, an adversary capable of shooting “at ranges never before known” and employing the other technologies available in a decade or so “will have a decisive advantage at the start of the next war.” Milley said that might be enough to have their way in a crisis.

Milley said preserving the peace in the North Atlantic “largely depends on the success or failure of this command.” If it failed, he reminded attendees the “butcher’s bill” was 150 million lives lost in World War I and II. “We’re going to succeed or fail with our allies and partners” in maintaining military readiness and modernizing forces for the future through alliances like NATO.

He called NATO, established in 1949, the bulwark of security with a global impact.

“The mission of this command is to fight the Battle of the Atlantic” if a crisis turns to conflict, he said.

Vice Adm. Andrew Lewis, who heads the command and also serves as the commander of U.S. 2nd Fleet, said “we can no longer assure we have control of the Atlantic as we had at the end of the Cold War.” He added the escalating competition with Russia and China is playing out “from the Arctic Circle to the South Pole.”

As an example of what’s at stake in controlling the North Atlantic, Lewis cited the undersea cables between Europe and North America. Ninety-seven percent of the data – financial, commercial, governmental, security and personal – flow through these cables between the two continents.

Climate change in the Arctic, he added, is opening northern sea routes, presenting new security challenges. Russia claims the most accessible of these routes pass through its territorial waters. To defend that claim, Moscow has embarked on an ambitious military-building campaign and has moved land, air and maritime forces into the region.

With the joint command now fully operational, Lewis said NATO and Supreme Allied Command Europe now have “a 360-degree approach to collective security.” Joint Forces Command Norfolk is one of two NATO commands based in the United States; the other two are based in Brunssum, Netherlands, and Naples, Italy.

The rationale for the command, Lewis said, was “to prepare for every possible crisis [in all domains] so the alliance has options.” Into the future, he said it is committed to maintaining “readiness and persistent vigilance.”

Lewis cited the success of the recent Steadfast Defender 2021 exercise off the coast of Portugal as an example of the command’s commitment to readiness. More than 20 nations were “prepared to operate together” in defense of Europe, he said. “It’s not about geographic boundaries, but about the mission” to protect the Atlantic connection, he said.

In a call with reporters before the exercise, Lewis said it also helped restore a “deterrence mindset” for allies in keeping the sea lanes of communication open.