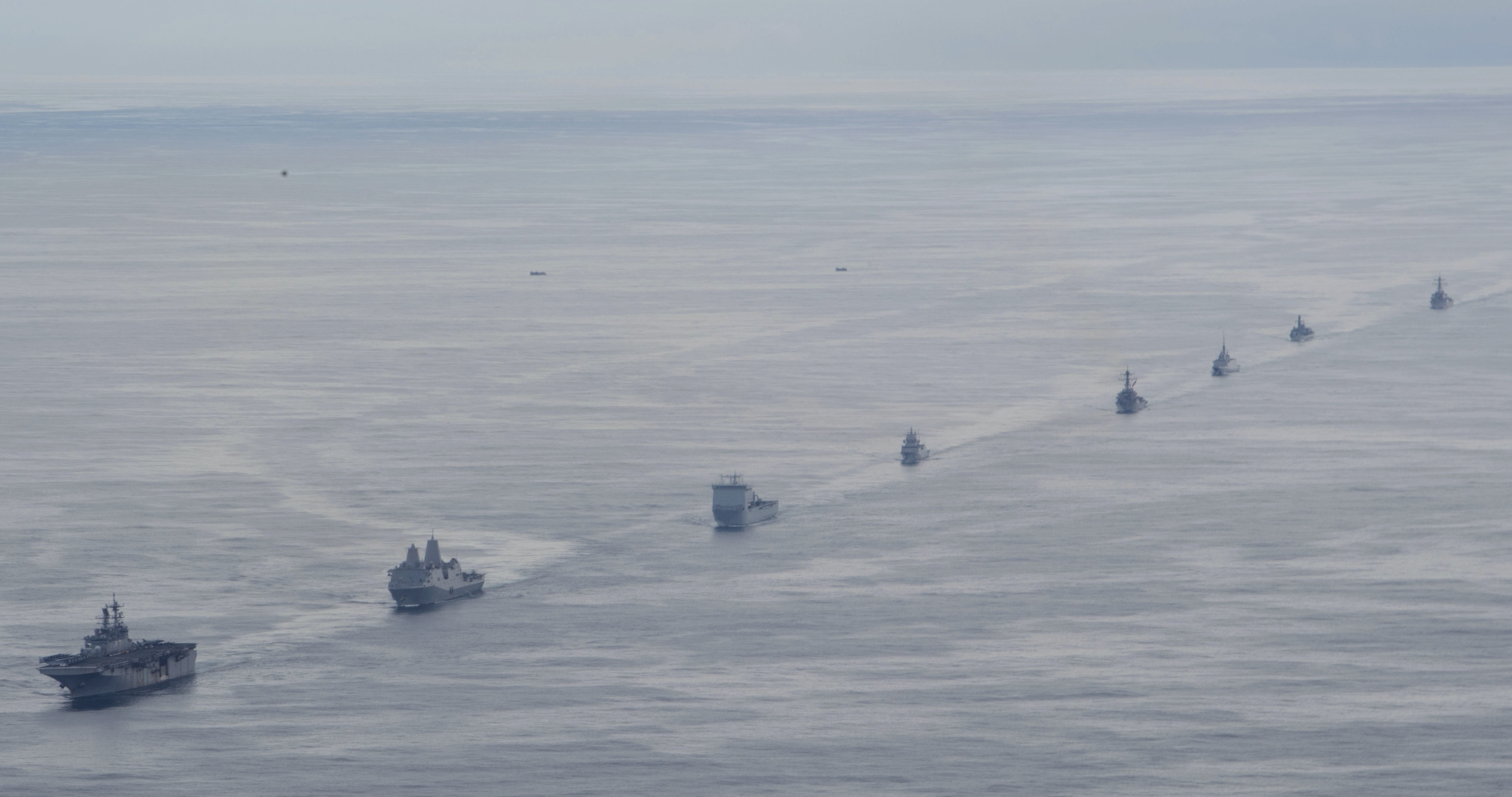 Ships from the U.S. Navy’s Iwo Jima Amphibious Ready Group (IWOARG), the Royal Navy’s Queen Elizabeth Carrier Strike Group and the French and Norwegian navies transit the Atlantic Ocean in formation during a photo exercise on May 17, 2021. US Navy Photo

NATO’s Steadfast Defender 2021 exercise is helping participating countries return to “a deterrence mindset,” as Russia continues a military buildup and increases its aggression, according to a Navy admiral.

“This is a much more subtle fight – literally from seabed to outer space” across all domains compared to World War II’s transportation of goods and manpower from North America to Europe, Lewis said.

As an example of that shift, he said 95 percent of internet traffic passes through undersea cables between Europe and North America, putting that financial, diplomatic and commercial data flow “at risk from adversaries doing bad stuff.”

The newly re-established 2nd Fleet is the maritime component commander for the opening LIVEX portion of the three-part exercise that started Thursday off the Portuguese coast. The drills include the Iwo Jima Amphibious Ready Group (ARG), the U.K. Royal Navy’s Queen Elizabeth carrier strike group and ships and aircraft from a total of 11 nations.

For the Royal Navy, he said it provides another opportunity “to rebuild fixed-wing embarked” capability. He and Lewis noted that the 18 F-35s on the carrier’s maiden voyage is the largest air group of embarked fifth-generation fighters to date. An exercise press release added that it also would be the United Kingdom’s largest deployment of Fleet Air Arm helicopters in a decade.

As for the presence of Marines aboard Iwo Jima, Royal Canadian Navy Rear Adm. Steve Waddell, who is the vice commander of 2nd Fleet, said they offer “versatility” to the exercise. The Marines will be employed “ashore to control chokepoints” needed for access in a contested environment.

Although this year there will be no merchantmen participating in the exercise, Lewis said Steadfast Defender would “be developing staff and battle rhythms” needed in conflict. The 2nd Fleet staff is aboard Mount Whitney.

He added that this was “the biggest NATO exercise of the year.”

Waddell, aboard 6th Fleet’s command USS Mount Whitney (LCC-20), said the idea is to bring into play forces “from a number of different areas” to train together and standardize tactics, techniques and procedures from communications to effects. Some aircraft will be operating from land bases.

The idea behind the exercise is the rapid reinforcement of Europe in a time of crisis, with potential for high-end warfare with near-peer competitors.

Waddell said, “this is really bread and butter … fundamental naval and maritime operations at sea.” 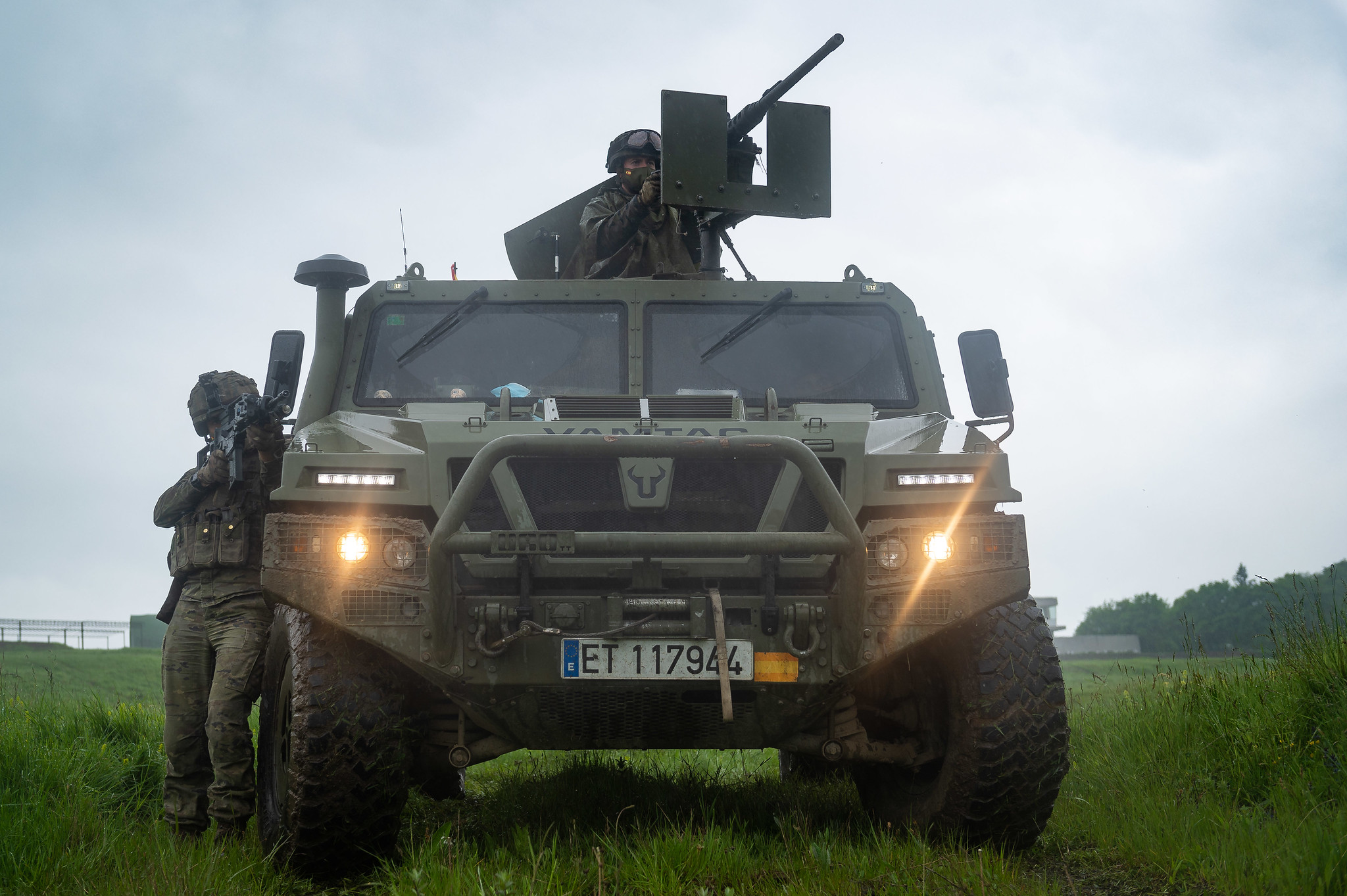 Spanish Soldiers assigned to the BRILAT Brigade hold their position with the “Uro Vamtac” vehicle in the field while training tactical vehicle manoeuvring during Exercise Steadfast Defender 2021 in Romania on May 20, 2021. NATO Photo

Lewis said Air Force Gen. Tod Wolters, who leads both NATO and U.S. European Command, has stressed the importance of “a coherent approach to Euro-Atlantic security” that links the two continents and stretches to the Arctic. He added that the emphasis on post-Cold War coherence and urgency is “a change in the way we operate” since Russia’s seizure of Crimea and increasing aggressiveness since 2014. It’s also reflected in diplomatic channels, as Russia assumes the chairmanship of the Arctic Council while the Kremlin continues its military buildup in the Far North.

Benton said Steadfast Defender 2021 and the other exercises send “a clear and unambiguous message” that the two continents are bound closely together. “Planning and executing” are at the core of all exercises, he said.

As for JFCNF, the alliance’s only operational command based in the United States, he said it was an opportunity “to demonstrate their progress.”

“Part two focuses on the enablement of Supreme Allied Commander Europe Area of Responsibility, Military Mobility and the Deployment of the NATO Response Force; and part three is when allies and partner nations will participate in various national exercises, including redeployment operations back to their home stations,” reads the press release describing the exercise after LIVEX.