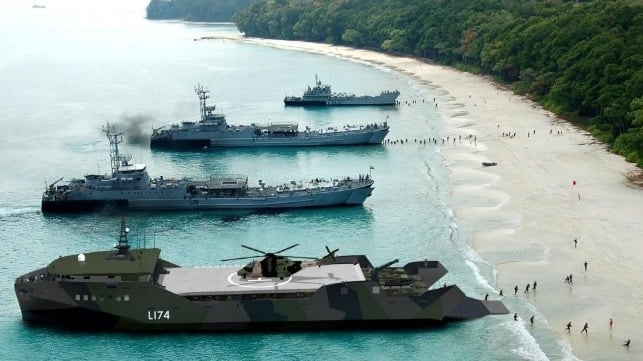 “A Concept Studies (CS) contract has been awarded to five offerors with a follow-on option for Preliminary Design (PD),” Baribeau said in a statement. “The CS/PD efforts include engineering analyses, tradeoff studies, and development of engineering and design documentation defining concepts studies/preliminary designs.”

The Navy did not disclose the amount of money each company received to perform the work, but Baribeau confirmed to USNI News that the total combined amount of the contracts was less than $7.5 million. The service is slated to issue the construction award in FY 2023, Baribeau said.

“The Navy is aggressively developing requirements and the acquisition strategy to begin procurement and deliver the Lightweight Amphibious Warship (LAW),” Baribeau said. “The Navy is planning for the Detail Design and Construction award in FY23.”

The service’s FY 2022 request, unveiled at the end of May, is seeking $13.18 million in research and development funding for LAW. According to the budget documents, the Navy expects to begin the request for proposals process for LAW’s detail design and construction during the second quarter of FY 2022.

Marine Corps officials have expressed the need for the Navy to move fast in pursuing LAW, which has emerged as a key portion of the Marines’ island-hopping strategy in the Pacific.

“The Light Amphibious Warship (LAW) is a medium-sized landing ship that enables distributed maneuver and logistics such as Distributed Maritime Operations (DMO), Littoral Operations in a Contested Environment (LOCE), and Expeditionary Advanced Base Operations (EABO) in support of the newly established Marine Littoral Regiment (MLR),” the budget books read. “It is designed to fill the gap in capability between the Navy’s large, multipurpose amphibious warfare ‘L’ class ships and smaller landing vessels. This vessel will deploy tailored logistics, select power projection and strike capabilities.”

USNI News in January reported that 10 to 11 industry teams were participating in NAVSEA’s competition for LAW. Maj. Gen. Tracy King, the former director of expeditionary warfare on the chief of naval operations’ staff (OPNAV N95), said at the time that the Navy planned to downselect to three teams for the design portion in the middle of next year and then one team to build the LAW toward the end of FY 2022.

The Navy planned to buy 28 to 30 LAWs starting in FY 2023, but the Trump administration’s proposal for an FY 2022 shipbuilding blueprint, released in December, had showed the service buying the first LAW in 2022. But the Navy only sought the research and development funding in the recent FY 2022 request.