The Navy has installed a one-star admiral to oversee a task force focused on refining the employment, maintenance and reliability of the Littoral Combat Ship program, the service announced today.

His new job to oversee the task force comes after commander of Naval Surface Forces Vice Adm. Roy Kitchener initiated an LCS follow-up study last September focusing on both the reliability and maintenance of the LCSs, USNI News previously reported.

Kitchener told reporters today that the study he led fed into the new task force focus, which has four lines of effort. The task force seeks to incorporate all of the groups working on LCS-related work – including the director of the surface warfare division on the chief of naval operations’ staff (OPNAV N96), the director of expeditionary warfare (OPNAV N95), and the Program Executive Office for Unmanned and Small Combatants – and streamline the effort. 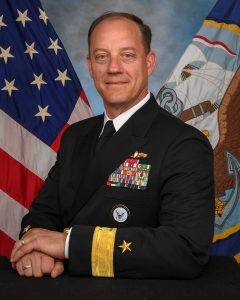 “Between the deployments and then some of the analysis we did during the study, we came up with a couple of things to go look at. And that was basically, A) How do we make them more reliable? B) How do we sustain them forward into the future, as we looked at sort of some expeditionary maintenance concepts? [C)] We looked at the lethality – can we make them more lethal? And then finally, [D] we looked at the force generation piece, which was really, ‘okay how do we train them and then how do we properly man them and how do we move them forward?’” Kitchener said of the effort.

As part of Kitchener’s LCS study, Program Executive Office for Unmanned and Small Combatants Rear Adm. Casey Moton has been leading an LCS Strike Team, which Kitchener said has been focusing on the reliability portion of the new task force.

“But the idea was how do we quickly identify fixes and to improve LCS reliability and sustainability, right – the difference being on the reliability side what we found was we were having high failure rates on some critical parts that were reducing our number of days underway and obviously we wanted to solve that quickly,” Kitchener said.

With 32 reliability issues between the two LCS variants – Freedom-class and Independence-class ships – the Navy picked a few problems with each variant that, if fixed, would have the greatest effect.

“Remember, 32 is two variants. So if they were one variant, then the number – you would expect it to be maybe less,” Nowakowski told reporters. “But when you’re talking two variants, they’re not all the same parts and pieces.”

The top issue for the Freedom-class is the combining gear problem that has hamstrung the propulsion plants for the class. Kitchener said a fix for it has completed ground-based testing in Germany and is slated for installation on the future USS Minneapolis-Saint Paul (LCS-21).

As for the sustainability portion, Kitchener noted that a 2016 study concluded that the Navy should move toward having sailors perform more maintenance instead of contractors. The entire process of having a contractor come out to a ship and perform a maintenance task takes 21 days, Kitchener said, but the Navy wants to reduce that timeframe to five days. 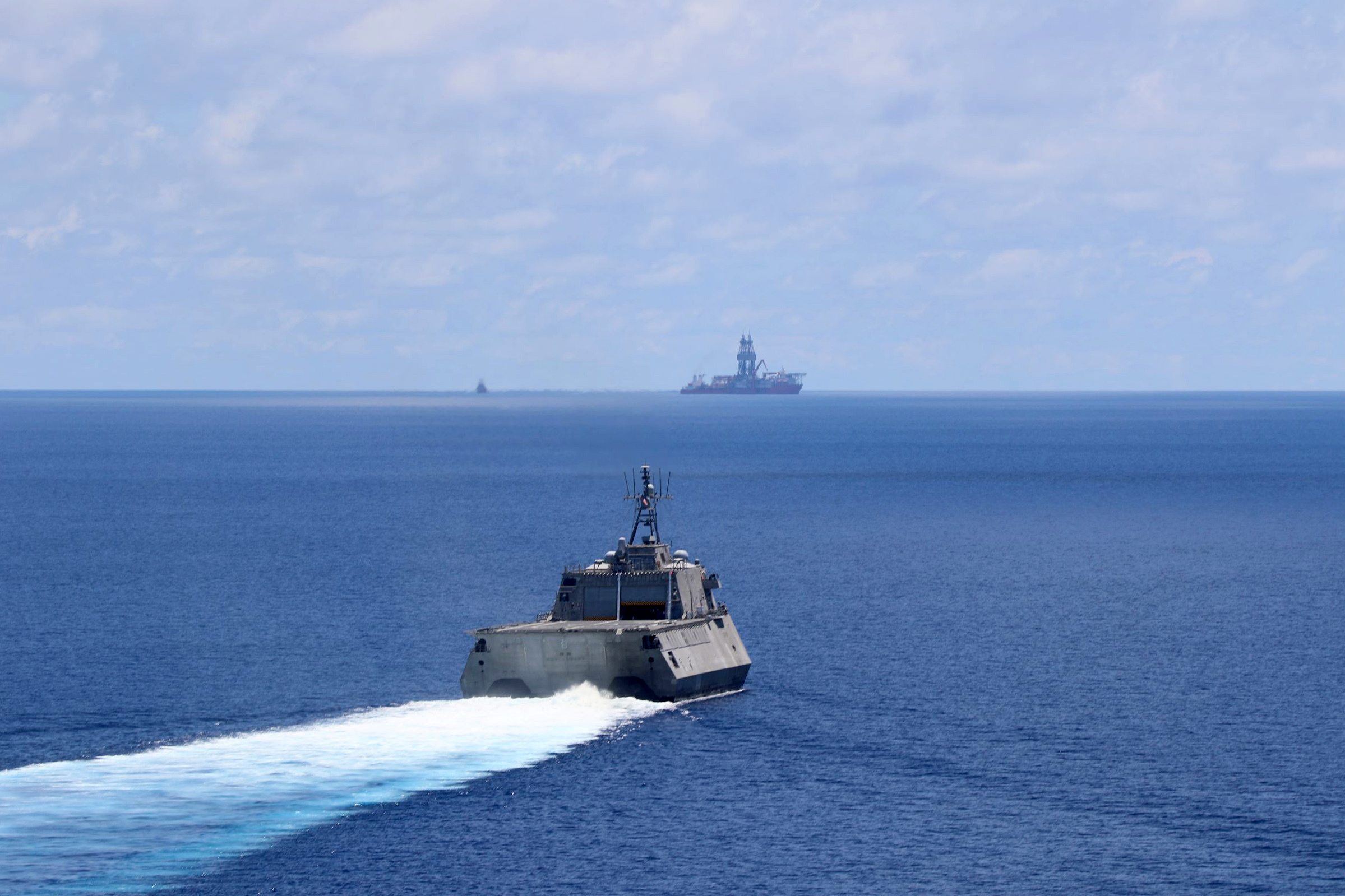 The Independence-variant littoral combat ship USS Montgomery (LCS 8) conducts routine operations near Panamanian flagged drillship, West Capella, May 7, 2020. Montgomery is on a rotational deployment to USINDOPACOM, conducting operations, exercises and port visits throughout the region and working hull-to-hull with allied and partner navies to provide maritime security and stability, key pillars of a free and open Indo-Pacific. US Navy photo.

While he acknowledged the Navy will still need to use contractors for some maintenance tasks, Kitchener said he wants sailors to perform most of the LCS maintenance, a departure from previous plans for contractors to do the bulk of it.

On the lethality piece, Kitchener pointed to the Navy’s plans to outfit the Naval Strike Missile (NSM) on the LCSs, with the service prioritizing its fielding on ships that will deploy to the Indo-Pacific region.

“We’re also looking at other options of things that we can put on these ships to give them a longer reach and hope to do some kind of proof-of-concept demonstration for increased surface lethality next spring, or perhaps in the summer. [We’re] targeting a couple of exercises for that,” he said.

As for how to use the ship operationally, Kitchener said asking numbered fleet commanders what types of missions they would like to use the LCSs for has helped them refine the options.

“One thing on the force [generation] side was how do we train? As you know, we have a really good train-to-qualify program and then the ships go into the basic side. And then we have an advanced and integrate phase. And quite frankly we needed to kind of solidify the advanced and integrated phase training. And we’ve done that,” he said. “And we did that through a process of one – and this was very helpful – is going out to the numbered fleet commanders and saying ‘okay, what is it? What are those key missions you want LCS to do?’ And when they came back with that, that allowed us to really tailor the training down.”

“It’s tailored to the specific mission that those fleet commanders want it to do. So that’s helped us sort of streamline the force generation side of it,” Kitchener added.

While the Navy has struggled to find its footing with the LCS program, combatant commanders have started using the ships for region-specific missions like counter-drug operations in U.S. Southern Command. Kitchener has previously pointed to the LCSs as a potential platform for the Marine Corps’ Expeditionary Advanced Base Operations (EABO) concept, which would see the Marines moving between islands and shorelines in a region like the Pacific to help the naval force. During the call with reporters today, Kitchener noted that the size of the flight deck on the Independence-class ships, along with their well decks, makes them a good option for Marines operating in the littorals in the Pacific.

Both Kitchener and Nowakowski noted that the Navy designed the LCSs before the military strategy shifted to a period of preparing for great power competition and away from a focus on counter-terrorism operations.

“If you put strike missile on those and perhaps some other promising things that we can use to increase its offensive capability, it’s a viable ship platform of choice with those weapons against great power competition, against our adversaries,” Kitchener said. “I know every time we put them out there in the Western Pacific, they make a difference – whether it’s being a known quantity out there with some capability, a lethal capability with the Chinese, or if it’s supporting the Marines or the [Special Operations Command] guys in the littorals. And it’s been the same thing down south and eventually, you know our goal is to push them forward into [U.S.] 6th Fleet and out to [U.S.] 5th Fleet.”

While there have been several studies on the LCS over the years, including a 2016 study led by then-Naval Surface Forces Vice Adm. Tom Rowden that helped the Navy understand how to crew the ships, Kitchener said the maintenance portion has been the biggest obstacle.

“I think one of the toughest challenges we’ve had is quite frankly one is how we do the maintenance. That was very different for us – going to the [contractor]-based maintenance and sailors being more of an operational role and maybe picking up 10 to 20 percent of the work to be done. It left us with the inability quite frankly to troubleshoot to the level that the Navy is used to doing. You know, on all the ships I served [on] that’s why we have them – sailors there and we have all the things, the tools needed,” Kitchener said. 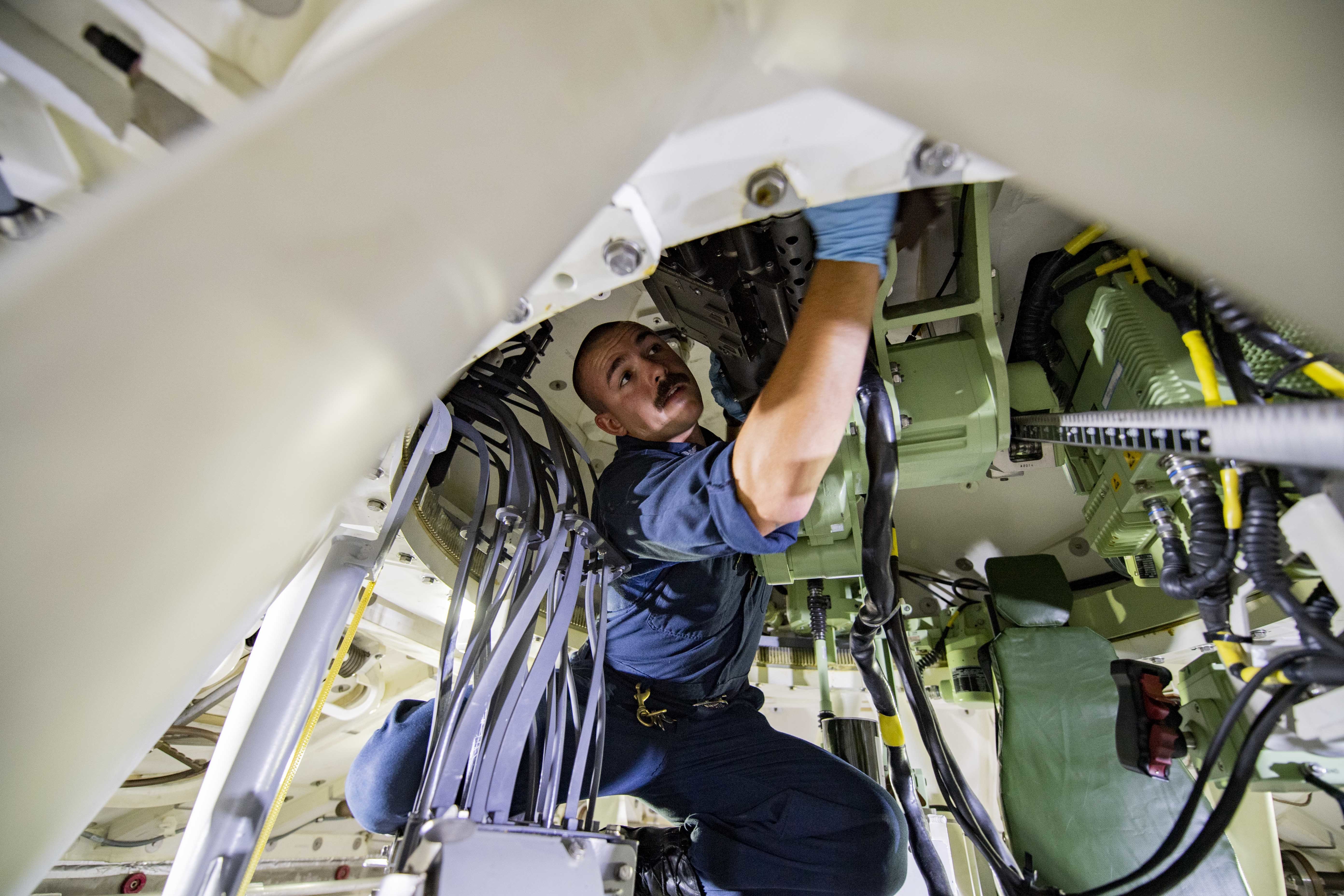 “We struggle a little bit and I would tell you we still struggle a little bit with the right parts and making sure we have what we need in-depth. I think we’re getting better at that. We focused – because of the good work from the strike team – on where we need and what we need. But I would say that was the biggest issue that was holding us back,” he added. “And then with any new class, just kind of working through those problems that we’ve had with the reliability. And again, I’m not declaring victory on that. I think once we get through these and get these installed on these ships, we’ll see where we are.”

With more deployments under the class’ belt, the Navy now has more data and information it can use to inform the maintenance, reliability and operational practices for the class. Kitchener plans to update Chief of Naval Operations Adm. Mike Gilday with more information this summer.

“I’ve told the CNO and the corporate board there that we’ll come up and give them an update once a quarter,” Kitchener said. “I think the timing is probably right soon – sometime this summer – that we get some of the results back from our deployers and how we’re doing.”