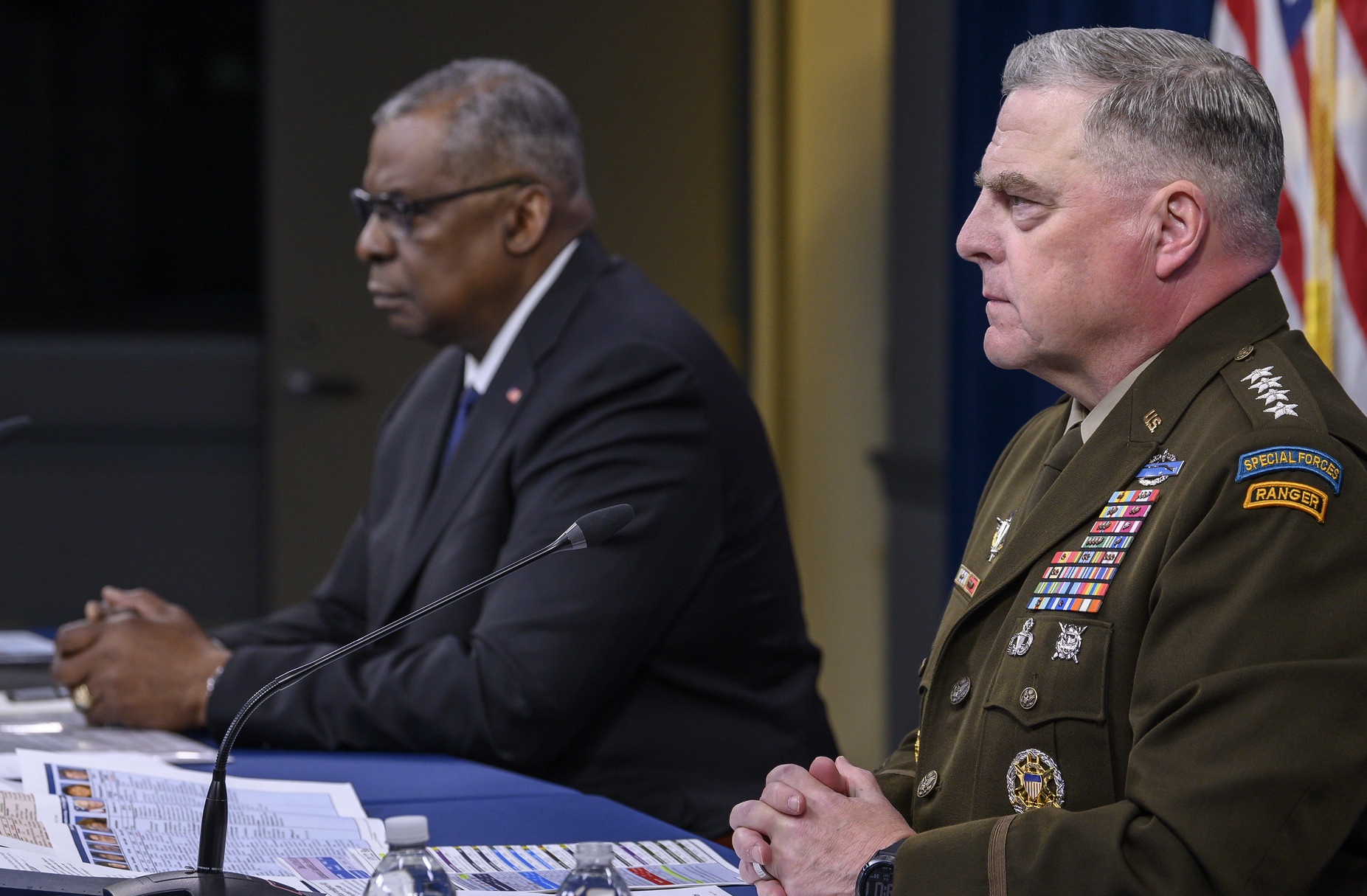 Secretary of Defense Lloyd J. Austin III and Chairman of the Joint Chiefs of Staff Army Gen. Mark A. Milley testify before the House Appropriations Committee-Defense on the Fiscal 2022 Department of Defense Budget in the Pentagon Press Briefing Room, Washington, D.C., May 27, 2021. DoD Photo

While the Chinese are investing heavily in advanced technology, “they are not our peer or near-peer competitor just” militarily, but their goal is “to be our equal” across all domains in the coming decades, the chairman of the Joint Chiefs of Staff said today.

Testifying Thursday to the House Appropriations defense subcommittee before the panel formally receives the president’s Fiscal Year 2022 budget, Army Gen. Mark Milley said China has made remarkable strides in 40 years from “peasant-based infantry” to a military power spending on 5G telecommunications, hypersonics, quantum computing and other high technology advances to modernize its forces.

Answering a later question, Defense Secretary Lloyd Austin said the expected $715 billion request will include “the largest request for RDT&E [research, development, test and evaluation]” in Pentagon history. The long-range goal is “not just [to] leverage [high technology systems and software] but network” those capabilities.

The proposed budget “is biased to the future operating environment,” Milley said. An example of “disruptive technology” in future conflict would see advanced manufacturing as a means to provide necessary parts for widely dispersed ground forces in theater and possibly ships at sea, he said.

Milley cited each service’s work on long-range fires as an important factor in investing now for the future to develop a joint concept on use. “Each of them brings unique, distinct capability” to the fight, he said.

At the hearing Milley called the services’ spending on long-range fires as “a down-payment, an investment that will pay dividends” in 15 to 20 years.

Austin opened the hearing saying these investments, “gives us the flexibility to divest ourselves of systems and platforms that do not adequately meet our needs … older ships, aircraft and [intelligence, surveillance and reconnaissance] platforms that demand more maintenance, upkeep and risk than we can afford.” He and Milley praised the Marine Corps for divesting its armor units to modernize its systems and approach to warfighting as a lighter, littoral force.

Rep. Ken Calvert (R-Calif.), the panel’s ranking member, called the Navy’s plan to decommission Littoral Combat Ships “a budget gimmick.” He added that move, if approved, flies in the face of Congress’ explicit instruction that two of those vessels be assigned to work in U.S. Southern Command. He said decommissioning these ships and the Air Force’s proposal to retire Air Force’s MQ-9 Reaper unmanned aerial vehicle made little sense “when there is not something immediately [ready] to replace” them.

The Navy plans to decommission USS Independence (LCS-2) and USS Freedom (LCS-1) in the coming months, likely before the Congressional committees complete the annual appropriations and policy bill process.

He added that the department and the services need to stop “sending up the same proposal that has been rejected” hoping the outcome will be different in this budget year.

When asked whether the request will be in line with the Navy’s Shipyard Infrastructure Optimization Plan, Austin said, “SIOP is a great initiative” and the administration will invest in it now and into the future. Milley added that it “is part of the integrated strategy” being developed now.

Milley said the National Defense Strategy produced during the Trump administration “needs to be updated. I was one of the guys who wrote it.” He and Austin agreed the “major pieces of the strategy [are] the same,” including the identification of threats from China, Russia, Iran, North Korea and transnational terrorist organizations.

But it was time “to right-size the force” through a “long overdue Global Posture Review,” Milley added.

Underpinning the strategy is a modernized nuclear deterrent, Austin said. He said the budget continues those efforts in all three legs of the nuclear triad.

Austin said “numbers are important” when talking about systems, but the United States “always seeks to develop a much great capability” than potential adversaries.

As the hearing was ending, Calvert noted that Chinese military shipbuilding is advancing at twice the rate of the United States and that the People’s Liberation Army Navy’s capabilities are growing as well.

“We all should remember what the Chinese are doing,” Calvert said.

As for keeping the armed forces apolitical, Austin – a retired Army four-star general – said, “we swear an oath to the Constitution of the United States. We will live up to that expectation.”

“For the health of the republic,” Milley said, the armed forces “will be and will remain apolitical.”