The Marine Corps will soon lay out its path to achieve a 2030 force optimized for conflict with China in the littorals – a force that will completely divest of its tanks and slash most of its artillery cannon battalions, instead focusing on developing light mobility options to get around island chains with the assistance of unmanned systems and mobile anti-ship missiles.

The service has been working on this new vision since Commandant of the Marine Corps Gen. David Berger took command last summer, and Berger is likely to release the full plan soon.

“The Marine Corps is not optimized to meet the demands of the National Defense Strategy. In the summer of 2019, the Marine Corps began force design activities focused on adapting capabilities to properly shape the Marine Corps’ contributions to naval warfare and the joint force. These planning efforts led to a modernized design which incorporates emerging technologies and significant changes in force structure to deliver a Marine Corps the nation needs by 2030,” Maj. Joshua Benson, a spokesman for the Marine Corps Combat Development Command, told USNI News in a statement.

Berger has previously said the Marine Corps needs to drop some of its capabilities going forward: some that are too heavy to be relevant in the upcoming fight that will require small units constantly on the move, and some that are just too costly in an environment where the Marines will have to invest in new emerging technologies while facing a flat or declining budget.

“By the year 2030, the Marine Corps will see complete divestments of Law Enforcement Battalions, Tank Battalions and associated Military Occupational Specialties (MOS), and all Bridging Companies. Additionally, the Corps will reduce the number of infantry battalions from 24 to 21; artillery cannon batteries from 21 to 5; amphibious vehicle companies from 6 to 4; and reduce tilt rotor, attack, and heavy lift squadrons,” he said.

The service will also trim its F-35B and C Joint Strike Fighter squadrons, reducing them from 16 Primary Aircraft Authorized (PAA) to 10 per squadron. 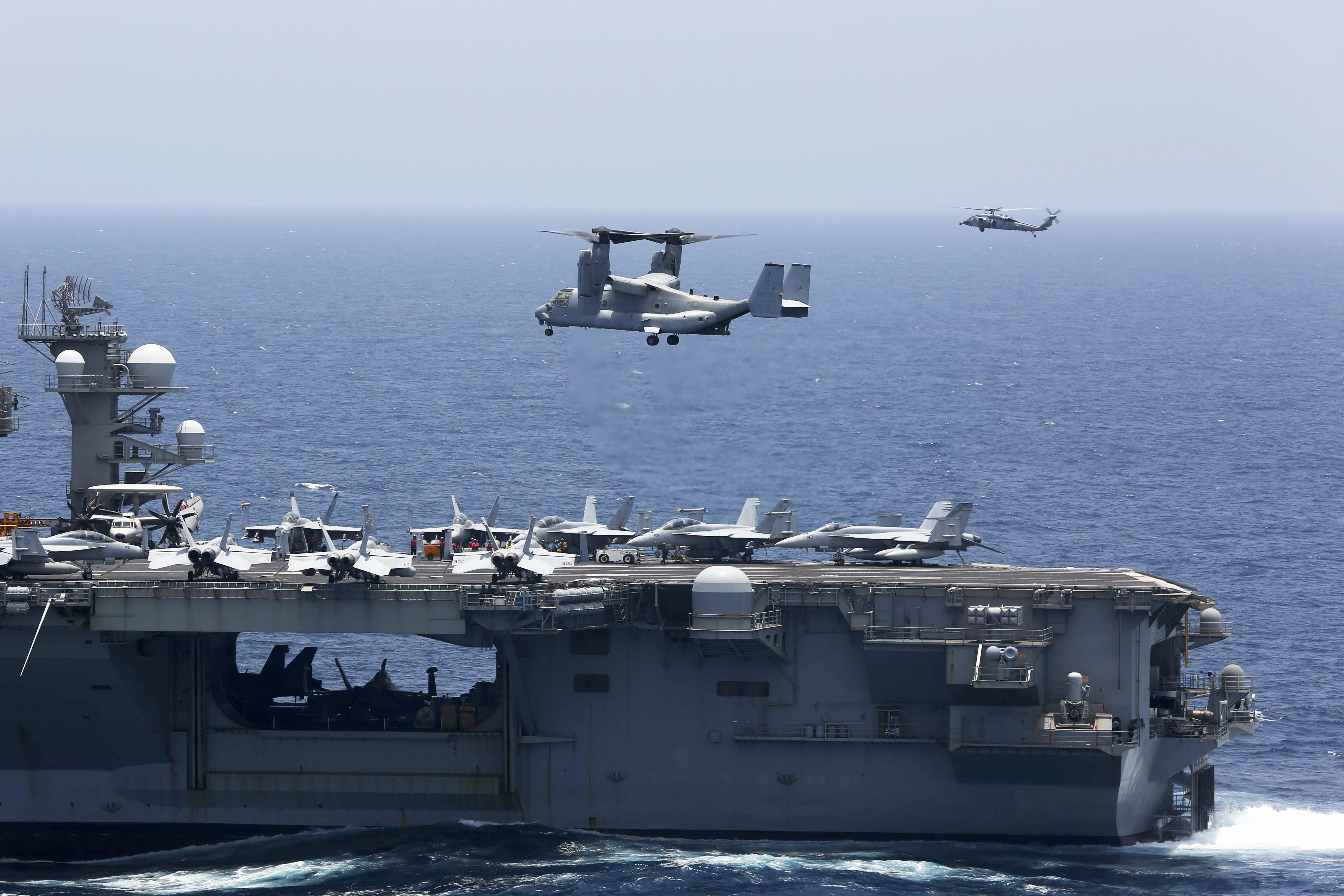 An MV-22 Osprey from Marine Medium Tiltrotor Squadron (VMM-264) prepares to land on the flight deck of the Nimitz-class aircraft carrier USS Abraham Lincoln (CVN 72) on May 17, 2019, in the Arabian Sea. The Abraham Lincoln Carrier Strike Group (ABECSG) and Kearsarge Amphibious Ready Group (KSGARG) are conducting joint operations in the U.S. 5th Fleet area of operations in 2019. US Navy photo

Marine Light Attack Helicopter Squadron 367 will be deactivated and relocated to Camp Pendleton, and the Marine Corps is canceling the activation of 5th Battalion, 10th Marines, instead reassigning its batteries under existing 10th Marine Regiment structure.

In total, the Marine Corps of 2030 will cut 12,000 personnel, or about 7 percent of the total force structure, to help pay for the investments in new technology for a new kind of fight in a contested littoral area.

“Throughout this 10-year initiative, the Marine Corps will be making investments in capabilities to include increasing long range precision fires, advanced reconnaissance capabilities, unmanned systems and resilient networks. Future budget requests will include an expanded list of viable unmanned capabilities that will create significant opportunity for industries across the country,” Benson said to USNI News, in response to a query following a Wall Street Journal article outlining the broad strokes of Berger’s plans.

Citing Berger’s priority in his July 2019 Commandant’s Planning Guidance to make III Marine Expeditionary Force (MEF) the Marine Corps’ main focus of effort – after naming China as the pacing threat the Marine Corps will plan to – Benson said “the Marine Corps will have three Marine Littoral Regiments (MLRs) organized, trained, and equipped to accomplish sea denial and sea control within actively contested maritime spaces as part of a modernized III MEF. This Pacific posture will be augmented by three globally deployable Marine Expeditionary Units (MEUs) that possess both traditional and Expeditionary Advanced Base capabilities that can deploy with non-standard Amphibious Ready Groups. I MEF and II MEF will generate forces to support the MLRs and the MEUs, while also being able to apply their forces against other challenges across the globe, consistent with Title 10 roles and missions.”

“These changes will be accompanied by a reinvigoration of the FMF (Fleet Marine Force) by assigning more Marine Corps forces to the Fleet; putting more Marine Corps experts in the Fleet Maritime Operations Centers; shifting emphasis in its training, education, and supporting establishment activities; and refining its component relationship in partnership with the Navy,” he added. 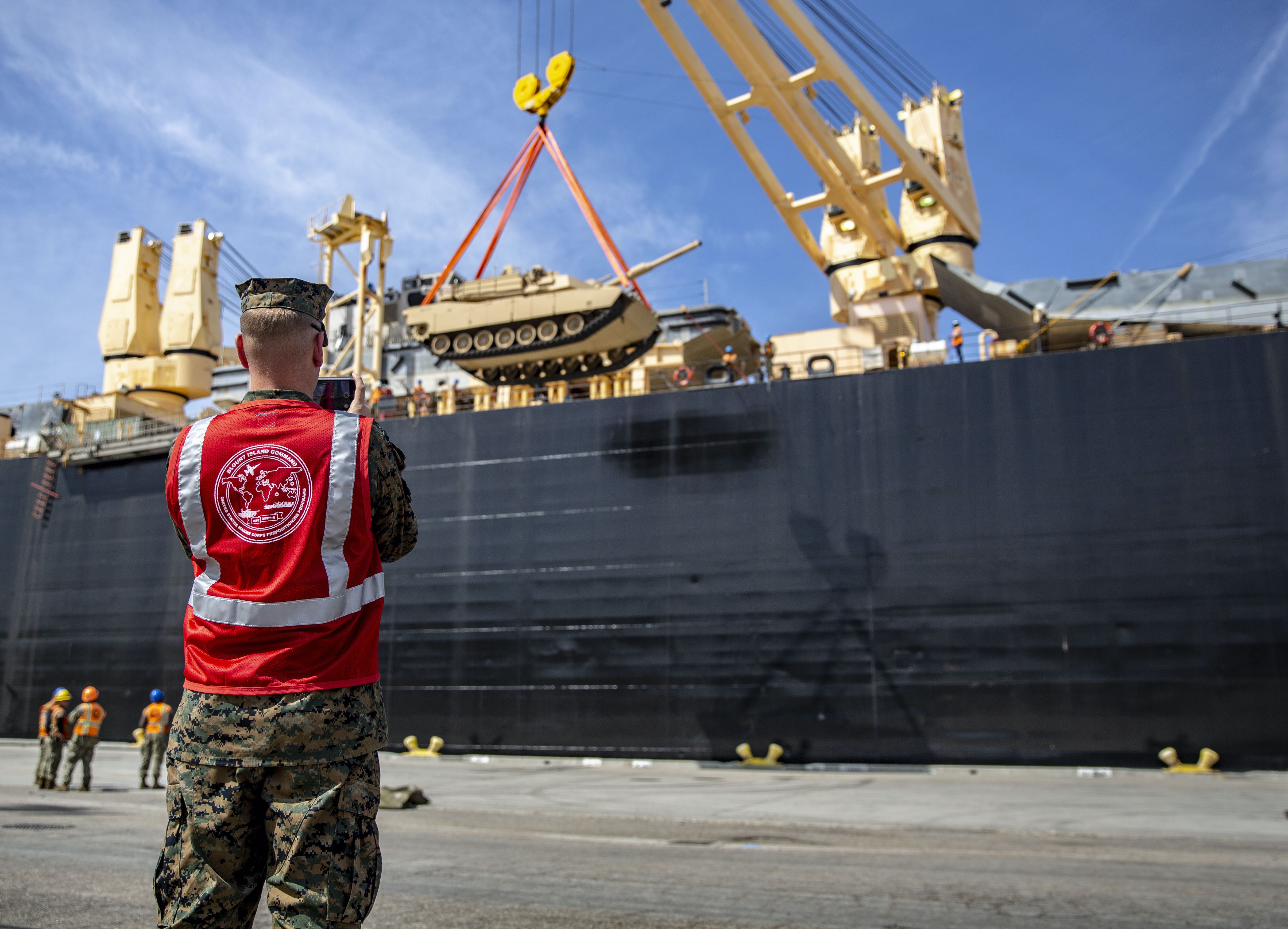 U.S. Marine Corps Chief Warrant Officer 4 Jesse Paulson, an Embarkation Officer with Blount Island Command, photographs an M1 Abrams as it is loaded on the USNS Sgt. William R. Button during a pier side back-load as part of exercise Pacific Blitz 19, at Port Hueneme, Calif., March 12, 2019. US Marine Corps Photo

Berger has made clear since last summer that he believes unmanned systems will change the way the Marine Corps fights, whether they are used to deliver supplies by sea and ashore, provide additional situational awareness, serve as decoys to help confuse adversary defenses, or fire weapons. Benson noted in his statement that this 2030 force design would “double the number of UAS (unmanned aerial systems) squadrons and austere lethal unmanned air and ground systems, enhancing our ability to sense and strike.”

The plan also calls for investments in long-range fires, such a 300-percent increase in rocket artillery capacity that will also include a new ability to launch anti-ship missiles; smaller infantry battalions better designed to support the Expeditionary Advance Base Operations concept; “a new light amphibious warship, as well as more affordable stern-landing and operational support vessels” to move these small units around; and investments in a range of offensive and defensive systems such as directed energy systems, loitering munitions, signature management tools, electronic warfare and expeditionary airfield capabilities that can help refuel and rearm manned and unmanned aircraft during EABO operations away from major shore infrastructure and out of range of amphibious ships at sea.

“The Marine Corps is redesigning the 2030 force for naval expeditionary warfare in actively contested spaces, fully aligning the service with the direction of the [National Defense Strategy],” Benson said.
“Moving forward, we will continue to judiciously evaluate, wargame, experiment, and refine our force design, improving service capabilities and lethality for deterrence, competition, and conflict.”