French President Emmanuel Macron is pushing Europeans to embrace “strategic autonomy” as the best way to revitalize NATO and address global challenges from the pandemic to arms control to climate change.

Speaking at an Atlantic Council online forum Thursday, Macron said, “we have to be much more in charge of our neighborhood.” He is urging other European nations to up their defense spending as a clear demonstration of their commitment to burden-sharing with the United States on security.

Later in answer to a question, Macron said, “the Middle East and Africa is our neighborhood, not the U.S.’s.”

He added the EU’s stepped-up commitment to security spending put an end to a “lose-lose situation” where the United States has to commit large number of forces to the continent and the Europeans have no say in the big decisions on their own defense.

“Now we are operating in a new era,” he said.

Macron said he wants Europeans to think of the EU as an entity concerned with security as much as economic issues. The union should be one that works in “political coordination with NATO” to ensure interoperability when called into action. As an example, he cited French operations in Syria with the United States and United Kingdom as to how this can work successfully.
But looking at NATO itself, he wanted to add a stronger political dimension to its “military superstructure” in the coming years.

Of immediate concern to Macron was Turkey’s commitment to NATO as it became more autocratic, sought out Moscow for sophisticated arms and paid no heed to dangers to allies of its unilateral military actions in recent years.
“Turkey put ourselves in a crazy situation” two years ago in northeast Syria. Despite American and French soldiers and Marines working alongside the Syrian Democratic Forces in fighting ISIS, the Turks launched without warning an all-out attack “against our proxies.” The reason the Turks gave was the link between the SDF and the People’s Protection Units (YPG). Turkey sees the YPG as linked to the Kurdistan Workers’ Party (PKK), which the Turks consider a terrorist group.

“The credibility of the U.S. and France was destroyed.” Macron added that the situation was worsened by the American decision to pull completely out of Syria in the wake of the attack. He said the alliance needs to clarify the rules between member states when it comes to intervention in a third country.

To revitalize the alliance, Macron said members need to answer basic questions, like who are NATO’s enemies, who is a terrorist and how should the alliance deal with new issues in the Pacific like China. As for Beijing, now that former President Donald Trump is out of office, Macron said “China is altogether a partner [in climate change], a competitor [especially in trade] and a systemic rival” for the United States, France and the European Union. “Now as the United States is re-engaging [the World Health Organization, Paris Climate Accords and World Trade Organization], what will China do?”

He suggested one way of engaging China would be to revitalize summit meetings involving Washington, Paris, London, Moscow and Beijing on major issues. A start, Macron said, would come through the democracies producing “rules of the road” agreements on cyber security, 5G telecommunication and advanced information technology that offer transparent alternatives to Chinese models of a “surveillance society” that lacks transparency on basic issues like health care.

Macron said China’s lack of transparency is evident even in combating COVID-19. “China managed to convince some countries [like Serbia, in the Persian Gulf and Africa] with its ‘diplomacy of vaccine'” that it was helping them long before the West could. “They provided a lot of doses” of their vaccine but no information about how it was developed, tested and manufactured. The idea was to prove to other nations “they are more efficient” than the democracies in meeting a global crisis, he said.

Now, as the WHO is trying to facilitate the movement of vaccines to Latin America and Africa, it still lacks this basic information from China on the efficacy and safety of its vaccines. 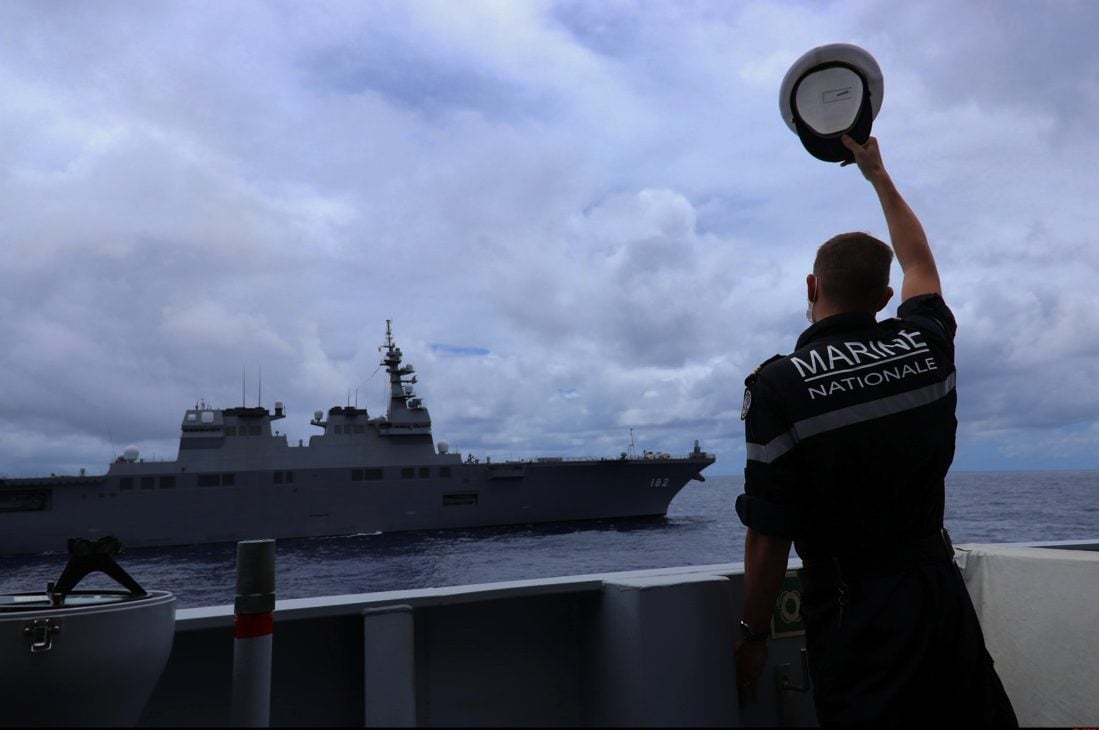 Macron said the EU has worked with the African Union and nations there and in Latin America on setting up programs where family care practitioners have safe vaccines that don’t require the super-cold refrigeration of Pfizer and Moderna doses for inoculation and treatment.

“Now’s the time to deliver” vaccines like those developed by Astra Zeneca and Johnson & Johnson. He said “the WHO has a role to play” in ensuring the poorer nations receive the necessary dosages.

Closer to Paris and a potential military threat to France is Russia, which Macron noted “is part of Europe.” He acknowledged Moscow has been unusually aggressive with Ukraine and Belarus. But Macron said some of the Kremlin’s behavior was understandable, as NATO pushed its borders eastward to Russia with the admission of Poland and the Baltic nations to the alliance.

“We have to re-create a framework for discussion with this country” that does not sweep under the rug its aggressive behavior in seizing territory, gray zone disinformation campaigns and cyber attacks, and its use of armed proxies to destabilize its neighbors. He also cited the jailing of opposition leader Alexei Navalny as a blatant example of the Kremlin’s stifling of domestic political dissent.

This means “put a red line” down to “prevent stronger divergence” from accepted behavior, he said.

Macron also wanted the Americans as well as the Europeans to recognize that Cold War presumptions on arms control were out-of-date in this new era. Citing the American withdrawal from the Intermediate-Range Nuclear Forces Treaty under the Trump administration, he said this directly affected countries like Poland. The decision was made with little or no consultation with NATO. “We need a broader discussion” with other countries about these ballistic and cruise missiles, he said. Washington and Moscow signed the original treaty in the 1980s.

Macron said the EU has a stake in any future negotiations and wanted also to bring in China, which has steadily built-up its intermediate-range missile arsenal.

Looking at the new Biden administration, Macron’s “Number one priority is to develop a … results-orientated framework” with the United States in confronting global issues. In his first telephone conversation with President Joe Biden, he said he described the “EU [European Union] and the U.S. are the two main players to build together” a relationship that meets security needs regionally and globally, covers trade issues between Brussels and Washington and focuses on climate issues.

“The EU is a credible player and one at a relevant level” on security that “is totally consistent with NATO and [it is] definitely in the interest of the United States” to work with it, Macron said.