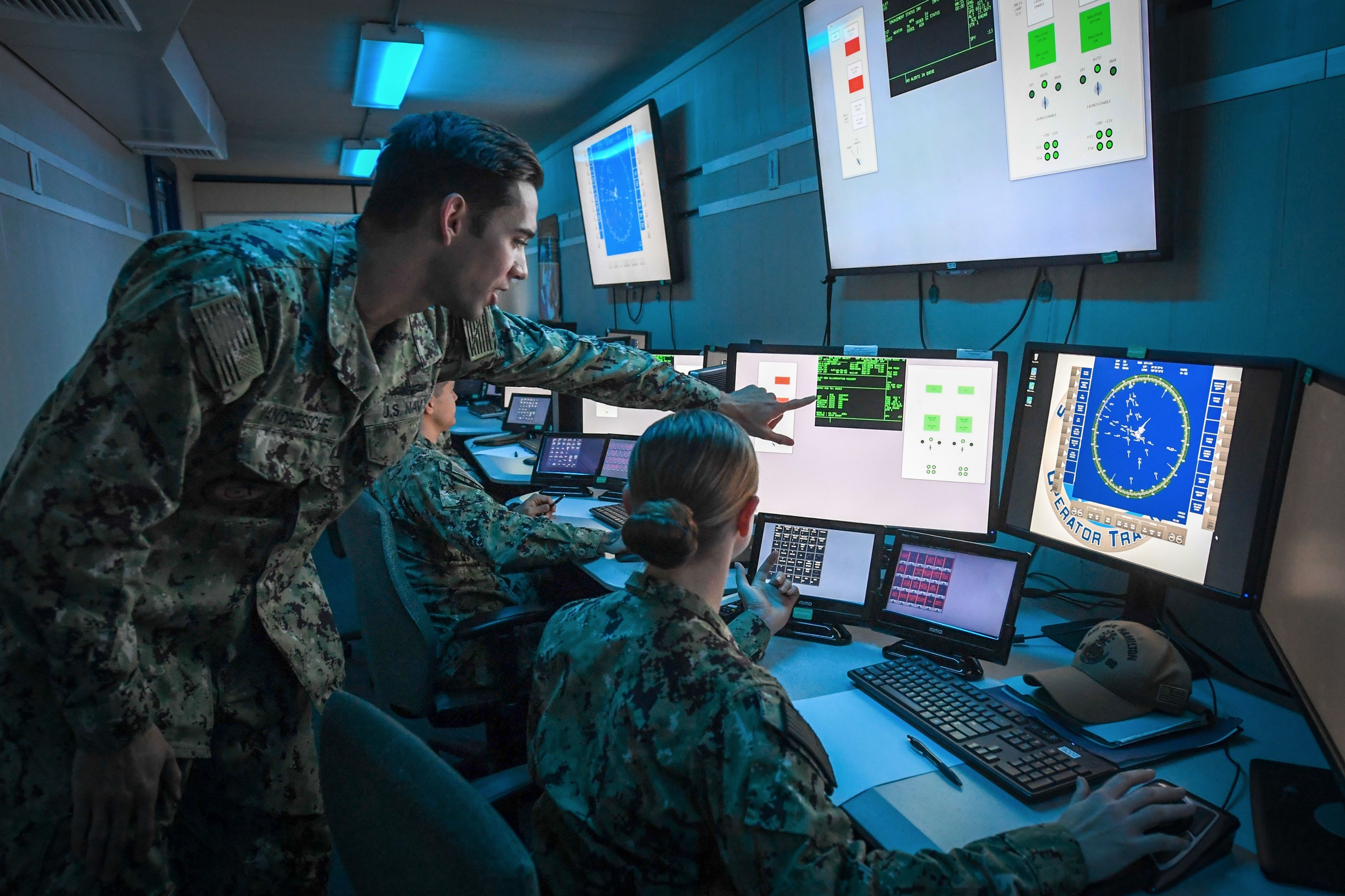 The head of the Navy’s surface force highlighted a handful of new training and manning initiatives meant to get sailors the right training they need to fight and maintain ships, put them in the jobs where that training can be best leveraged, and then continue that cycle of building and applying individual expertise to ultimately boost fleet readiness.

To that end, he praised the Mariner Skills Training Centers set up in San Diego, Calif., and Norfolk, Va., for their work so far using training simulators as part of a Junior Officer of the Deck Course “that thoroughly prepared more than 1,500 prospective surface warfare officers for the fleet in the last year and a half.”

Permanent facilities are being constructed now – the two schools were set up quickly in temporary facilities, in the aftermath of the 2017 fatal surface ship collisions and subsequent assessments that showed a lack of basic navigation and shiphandling skills among some officers – and Kitchener said these new facilities would launch in July. With the new buildings would come more simulators, a greater throughput, and the changeover from the six-week JOOD course to a nine-week, two-phase Officer of the Deck Course.

Kitchener also praised the fleet’s Integrated Navigation Seamanship Shiphandling Trainer (I-NSST) as a way to help crews during all phases of training – but especially those whose ships are in maintenance – improve their skills. The formerly named NSSTs are being upgraded to allow for integrated bridge and combat watch team training in complex scenarios, he said. This advanced training capability won’t just stay in the MSTCs in San Diego and Norfolk, but rather they’ll be sent to smaller fleet concentration areas as well. The trainers in Mayport, Fla., would receive the upgrade by this summer. Those in Sasebo, Japan, would be upgraded by the end of this year. And trainers in Pearl Harbor, Hawaii; Yokosuka, Japan; Everett, Wash.; and Rota, Spain, would be upgraded by mid-2022.

“Our goal is for every crew, not just the ones already operating at sea, to have a reliable place to solidify their mariner skills as a team, rehearsing in realistic scenarios until they perform like an orchestra perfectly in tune,” Kitchener said.

He pointed to the USS John S. McCain (DDG-56) crew, which had to keep its readiness up while the destroyer underwent nearly two years of repairs following its August 2017 collision off Singapore.

Kitchener said the crew conducted extensive training at the NSST, “so there was little rust to knock off when they entered the basic training phase.”

The admiral cited two new initiatives for live training at sea, as well. The Afloat Training Group had a pilot program for uninterrupted training at sea, which involved embedding training personnel aboard ships for greater support. Kitchener said this not only proved useful during the coronavirus pandemic, which movements to and from ships was complicated by health and safety protocols, but he also said the pilot showed it could streamline at-sea training and buy back some time for ship captains, who could then use that time to focus on specific skills they want to work on with their crews outside of the basic phase training curriculum. Kitchener said this model would be implemented across the waterfront.

Second, he said, “expanding our shore training support and bundling training at sea will help us sustain critical mariner and warfighting skills throughout our careers, but we need a standardized framework for delivering that training. We’re developing a Surface Warfare Combat Training Continuum, or SWCTC … to establish that framework. The SWCTC team led by [the Naval Surface and Mine Warfighting Development Center] identified 10 core competencies necessary to win wars at sea during great power competition, and we validated the relevance of those competencies across all ranks. The continuum being developed will center on those 10 core concepts, and all tactical watchstanders on every type of ship will follow a logical path of training and development. SWOs will learn the right tactics for every level of their career, whether driving, fighting, managing, commanding, or employing the ship,” he said.

SMWDC has already implemented the focus on those 10 core competencies into their waterfront training, and a pilot program involving two destroyers will begin this year to validate the SWCTC.

Kitchener went on to say that training was one piece of the puzzle, but then the Navy needed to go a step further and put the right people in the right jobs based on the training they had received and the experiences they had from previous assignments.

A first step in achieving this is having enough sailors: the Navy continues to fund more billets for destroyers as part of an initiative under former SWO Boss Vice Adm. Rich Brown, which looked at in-port workloads and found a need to increase DDG crews by 45 personnel. 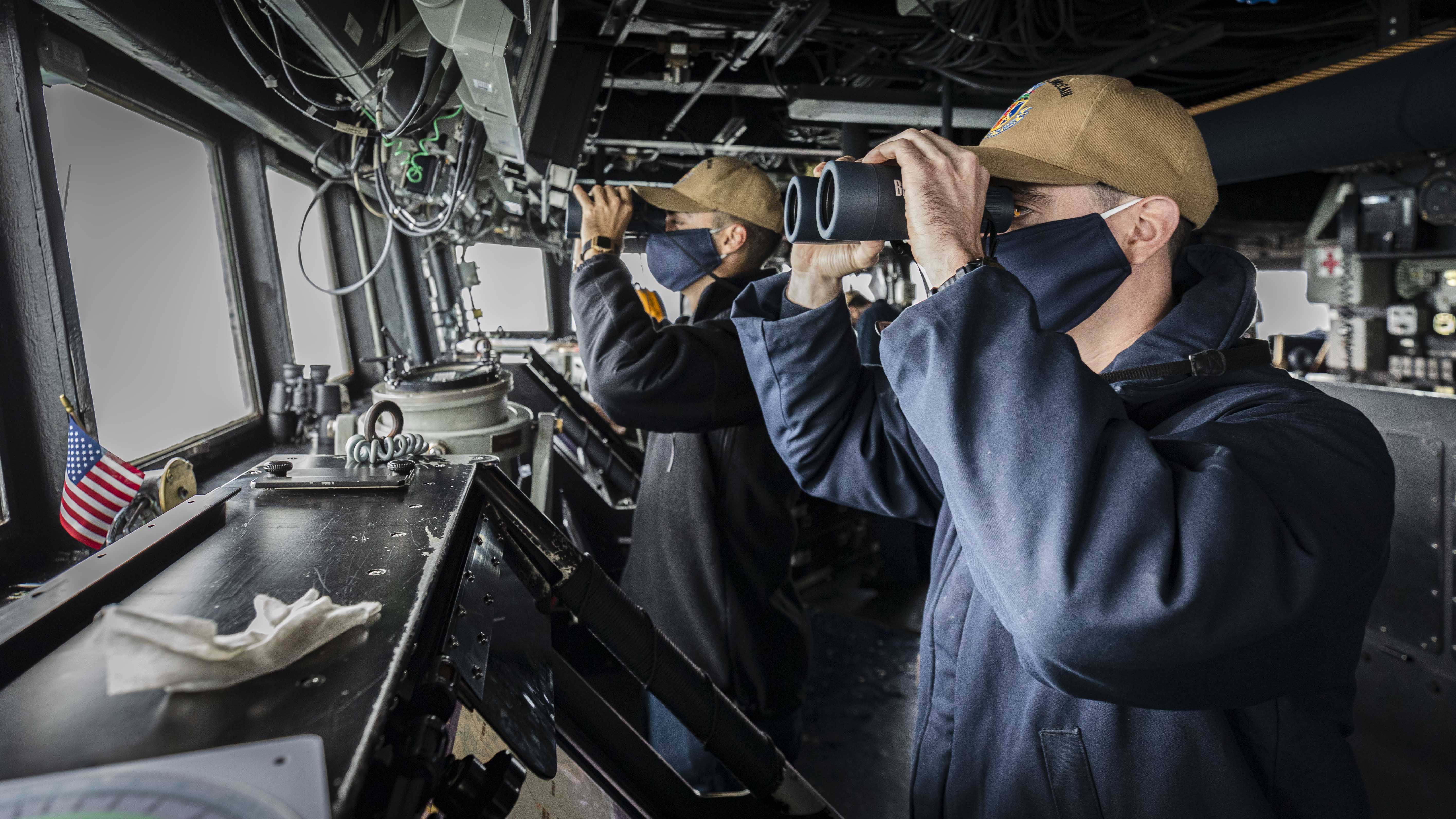 Ensign Joseph Hurd, far left, from Foley, Alabama, and Lt. j.g. Daniel Feeney, from Old Greenwich, Connecticut, scan the horizon while standing watch in the pilot house as guided-missile destroyer USS John S. McCain (DDG 56) conducts routine underway operations on Dec. 30, 2020, in the Taiwan Strait in support of stability and security for a free and open Indo-Pacific. US Navy photo.

Kitchener said there are still about 11,000 sea duty gaps, a figure that should decrease to about 7,500 by September. That meant that, in the last fiscal year, the Navy had to resort to 1,760 temporary personnel assignments to fill gaps on deploying ships.

“That is not a long-term solution. It adds stress on our sailors and thereby the force,” he said, adding that he’s working with commands throughout the Navy to ensure the accurate sailor workload is captured, so the Navy can set a requirement for the right amount of sailors it needs, so it can adjust manning and recruiting as needing.

“Achieving an accurate distribution of manpower is not only important for the short-term ship employment but also to the long-term proficiency and experience of our technicians, operators and maintainers, which we need to better value. That’s why we’re establishing what we call the Surface Manning Experience, or SURFMEX. SURFMEX will define standard methodology for quantifying and tracking a sailor’s experience and proficiency as they progress through those career-spanning training continuums I mentioned. And it will use an analytics-based approach to detail sailors to the right places first to learn and then to perform,” Kitchener said.
“SURFMEX will take us beyond that fit/fill list, where a sailor who attended (training) years ago and a sailor who just graduated look on paper like they’re equally prepared for a demanding shipboard billet, and rather into tracking and valuing their individual fleet experience and proficiency.”

“We chose these rates because, despite their significant impact on a ship’s warfighting readiness, we often see a disparity in the experience levels across the waterfront,” Kitchener said.

Rather than some ships having an overabundance of very experienced maintainers, for example, and other ships having less collective experience, SURFMEX would help spread out actual expertise in a way that current fit/fill metrics can’t do. SURFMEX could tailor training for the less experienced sailors to help them become more proficient. And then it would take those sailors and assign them to a shore tour that would benefit most from their experience. If a sailor who was very good at repairing propulsion systems were assigned to a waterfront maintenance support billet, the sailor could both improve ship readiness on the waterfront and also mentor other sailors.