The Navy in the next few weeks will release a further refinement of how to operate and maintain the Littoral Combat Ships that today make up the small surface combatant fleet.

In parallel, though, the service is working hard to take lessons learned from years of struggles with the LCS and ensure the upcoming frigate program can hit the ground running.

Commander of Naval Surface Forces Vice Adm. Roy Kitchener told USNI News in a Jan. 8 media roundtable that he’s been working on a follow-up LCS study since he took command over the summer and was almost ready to discuss findings related to how to achieve the most presence, what the most appropriate mission sets are, and how to improve sustainment and maintenance.

Kitchener told USNI News in an August interview that he was very pleased with the LCS training model but that other aspects – importantly, some ongoing design challenges, like the Freedom-variant combining gear, and refining the overseas maintenance model – still needed work.

He said he picked up where a 2016 LCS Review had left off and was looking forward to discussing the results as soon as the end of the month.

Still, it’s been 12 years since lead ship USS Freedom (LCS-1) commissioned, eight years since Freedom went on its first deployment to the Western Pacific and nearly four and a half years since that 2016 LCS Review overhauled LCS manning and organization. Kitchener acknowledged the need to get off to a faster start on the Constellation-class frigate, which the Navy has said will be at the heart of its Distributed Maritime Operations concept.

“When we started building frigate, we looked at lot at LCS and what we can learn – for example, the way we train on LCS, train to qualify, is a really good model and we’re going to leverage that for FFG-62,” Kitchener said during the media call ahead of this week’s Surface Navy Association annual symposiums.
“And then the manning, we just looked at what we’ve done on LCS, the blue/gold concept, and how we’re going to fit them out. And we think that is probably the way to get the most presence” out of the frigate hulls.

Rear Adm. Paul Schlise, director of the surface warfare division on the chief of naval operations’ staff (OPNAV N96), during the same call told USNI News that some of the key manning issues LCS had in the beginning would be avoided with frigate.

“The crew on a frigate will be larger, so there’s kind of inherently more capability in that crew. It’s not a minimally manned platform as the LCS was. … That means that the frigate, the Connie-class crew size, will support being able to do more multi-mission sorts of things, whereas the LCS is more single-mission, one mission at a time platform,” he said.
“And there’s some more ability for the crew to do its own maintenance; planned maintenance will be done much more so by the ship’s force crew on a frigate, on the Connie class, than on the LCS.”

Schlise added that decisions on frigate manning are still being made but that learning from LCS is an important part of the process.

“The ink’s not dry yet – we’re looking at, as the SWO Boss said, there’s some lessons learned from blue/gold crewing, I think there’s some ability to potentially deploy the ships for longer with a rotational crew model, and we are still learning about how to do that and what that right rotation is. So it’s a little bit pre-decisional still with Connie,” he said.
“I think at least the first few hulls, and I’m not going to give you a number because we haven’t decided yet, we will probably single-crew the first few hulls because there’s a lot of test and evaluation to go through with a new platform like that, and wringing out the new systems, going through all the testing required to bring a new platform fully into this fleet, to get it to [initial operational capability] and [full operational capability]. If we do modify that crewing model farther down the road, that is something that’s under consideration, and we’re looking to of course give the best Ao, availability for operations, to the fleet commander that we can with the platforms.” 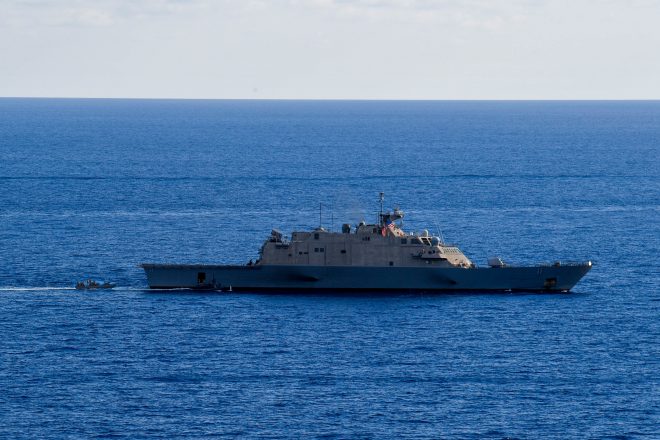 Beyond just manning and training issues, ongoing mission package testing for the LCS will also help the frigate program.

The Navy has so far only deployed its surface warfare mission package, which includes manned and unmanned helicopters, the Longbow Hellfire anti-surface missile, 30mm guns and a rigid-hull inflatable boat (RHIB).

The other two mission packages have repeatedly fallen behind in their testing and are past their anticipated timelines for reaching IOC.

The anti-submarine warfare package includes an Escort Mission Module that consists of a variable-depth sonar that is new and a multi-function towed array for active and passive listening that the fleet already has fielded; and a Torpedo Defense Module with a light-weight tow.

The ASW mission package was previously on track to reach IOC in Fiscal Year 2019 and then was pushed back to FY 2020. However, now in FY 2021, testing is still ongoing. 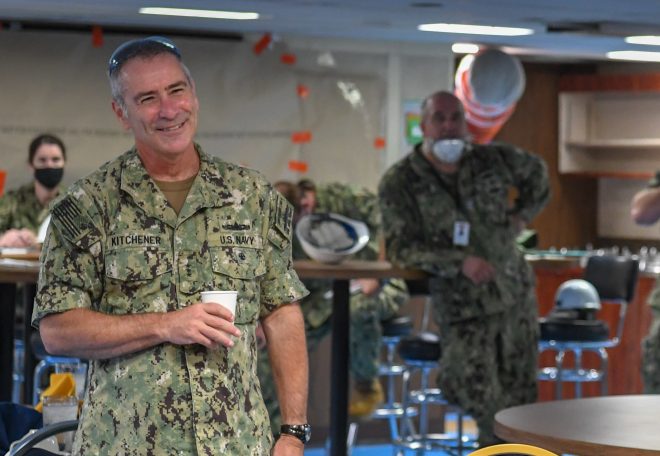 Despite the delays, Schlise said the ongoing variable depth sonar testing was important not just to the LCS mission package but also to the future frigate.

ASW mission package testing “directly ties into what we will eventually field on the FFG-62 Constellation-class frigate. We are pretty excited about the progress that we’ve made with the variable depth sonar system that is a piece of that ASW mission package. And that is something that the Connie-class frigate will have. So they’re sort of joined at the hip there in terms of our small surface combatant force between LCS and frigate,” he said.

Maj. Gen. Tracy King, the director of expeditionary warfare on the CNO’s staff (OPNAV N95), said during the same call that the mine countermeasures mission packages are being built now and that the Navy would start fielding them in two or three years.

“I like the direction we’re going in. We do have some technological challenges just because of the difficult nature of finding mines in the open ocean. But we’re really focused in on wide-area detection and giving the joint force and the naval force commander the situational awareness to decide what he wants to do with that threat,” he told USNI News in the call.
“I like that we’re married up with the LCSs, they’re a tremendous platform on which to do this mission. We’ll probably see some of the packages also on vessels of opportunity like the [expeditionary sea bases].”