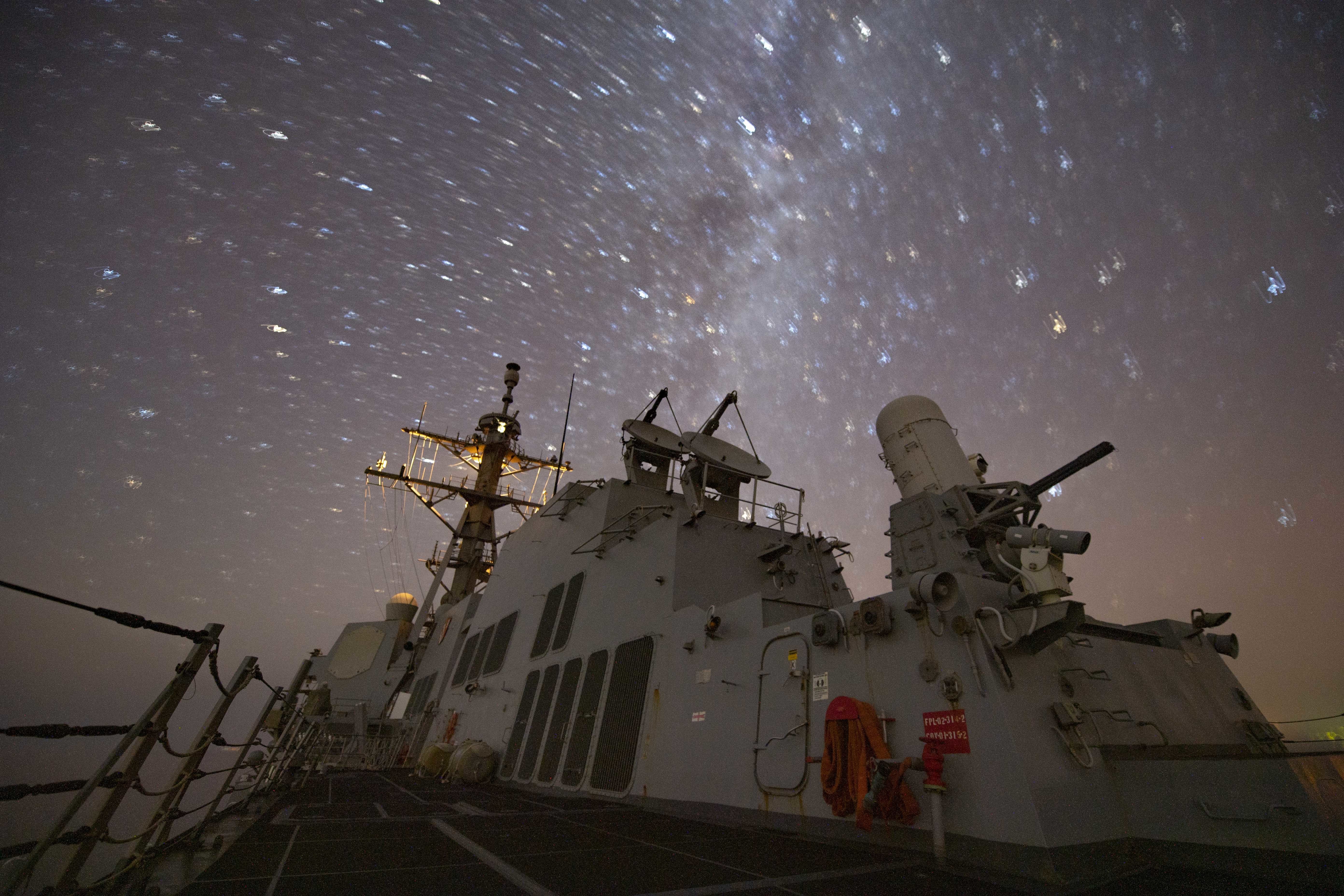 The Arleigh Burke-class guided-missile destroyer USS Sterett (DDG 104) steams in the Gulf of Oman at night on Sept. 8, 2020. Sterett is part of the Nimitz Carrier Strike Group and is deployed to the U.S. 5th Fleet area of operations. US Navy photo.

As the Navy pursues a blueprint for its tactical data network to connect weapons and sensors across the battlefield, the service hopes the structure of its Project Overmatch initiative will help develop requirements for the new effort.

Speaking at a virtual event co-hosted by the Center for Strategic and International Studies and the U.S. Naval Institute on Thursday, Deputy Chief of Naval Operations for Warfighting Requirements and Capabilities (OPNAV N9) Vice Adm. Jim Kilby pointed to the new Project Overmatch initiative as a way for the Navy to assess its approach to finding common networks and communications to drive naval integration.

For almost two decades, the Navy has worked to link the sensors of its surface combatants and aircraft with guided weapons throughout the fleet to create an expansive tactical battle network. Now, with the Pentagon’s focus on a potential fight in the vast Indo-Pacific region, officials have emphasized the need for all the services to quickly communicate and share information across all platforms and domains.

Kilby said he expects the service’s work on Project Overmatch up to the three-star level will produce better outcomes than the “bottoms up” method of starting with requirements, working toward a program and eventually inserting the platform or capability into the network.

“That is, in essence, how do we look at our naval tactical grid — naval, not Navy tactical grid — with a thought about the joint force,” Kilby said of Project Overmatch.

“So this is [Joint All-Domain Command and Control], it’s Project Convergence with the Army, but do we have it right? And are there some things we can do differently now – big decisions – that we can drive that integration much quicker than we would normally have it occur? So we’re fairly adept in the Navy at connecting systems, point solutions,” he added. “The questions we’re asking ourself – with the force that we’re going to field – do we have the latency right? Do we have the aggregate demand signal right on the network? And is there a better way to do this?”

Chief of Naval Operations Adm. Mike Gilday signed two memos earlier this month creating the Project Overmatch initiative and placing Rear Adm. Doug Small, commander of the Naval Information Warfare Systems Command, at the helm. One memo tasks Small with creating a Naval Operational Architecture that can support the Distributed Maritime Operations concept. Small should also work to enable the infrastructure needed for common communication between various platforms and networks in both the manned and unmanned realm in all domains, according to the memo.

“Specifically, you are to develop the networks, infrastructure, data architecture, tools, and analytics that support the operational and developmental environment that will enable our sustained maritime dominance,” the memo to Small reads.

The other memo directs Kilby to speed up the Navy’s pursuit of both “the unmanned capabilities and long-range precision fires” to support Small’s work. The documents instruct Small and Kilby to each create an “initial plan” in two months and provide the chief of naval operations with updates every three months.

While the Navy has long pushed for network commonality, the service last year took the first steps toward battle network integration with the Air Force. USNI News previously reported that the two services came to a handshake deal to share targeting data and pursue JADC2.

Describing the JADC2 efforts, Deputy Commandant for Combat Development and Integration Lt. Gen. Eric Smith said that, while the services would employ different capabilities from different platforms, the objective is to move data seamlessly through all domains to enable targeting.

“First, I would say that there’s always going to be some slight difference, dissonance, whatever you want to call it, between services, as we go to Joint All Domain Command and Control. That is a requirement so that you get to – what was originally discussed as – any sensor, any shooter,” Smith said at Thursday’s event. 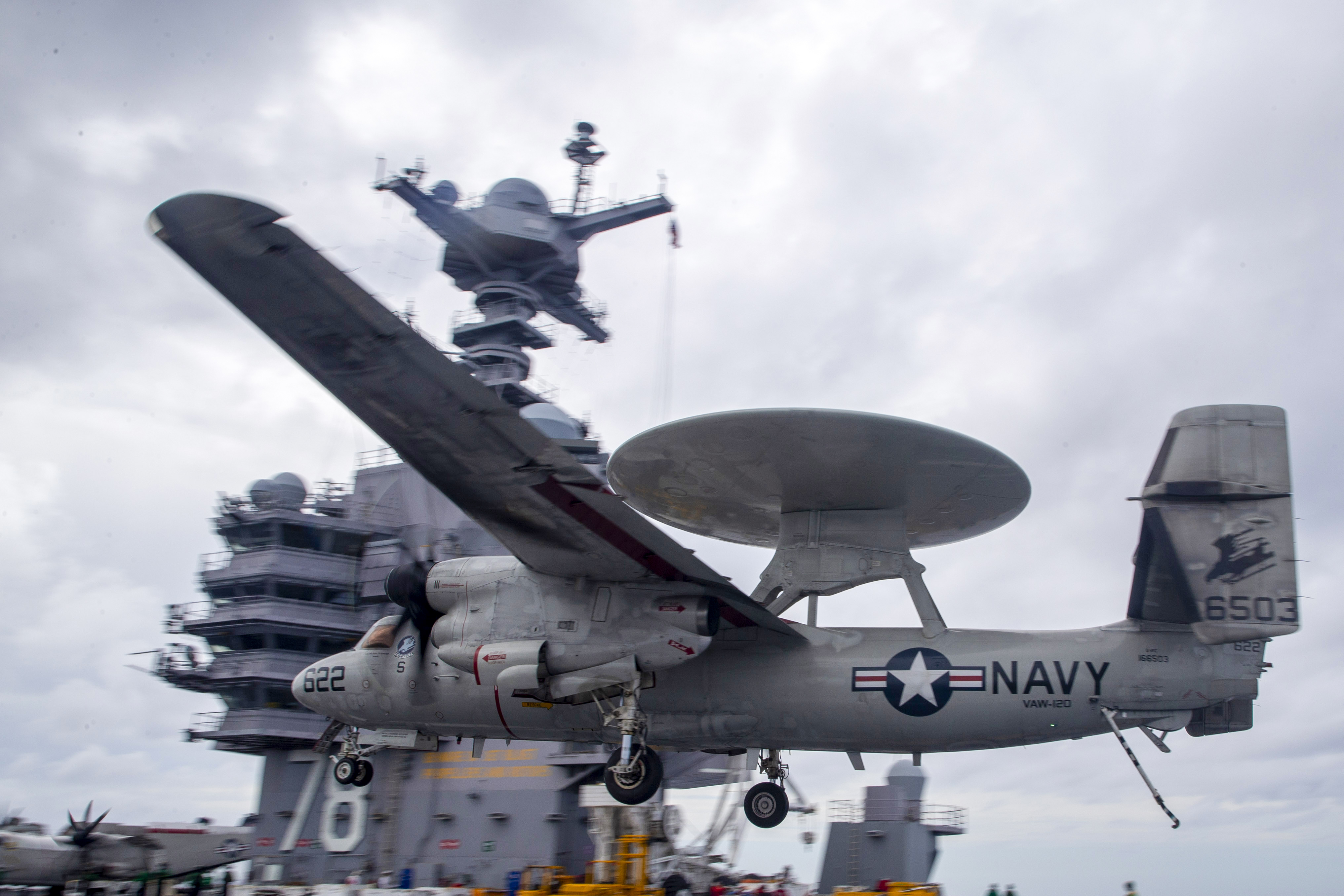 “And I think the Army during Project Overmatch has correctly kind of modified that in their vernacular to all sensors, best shooter, which I actually like that better. Because you want the sensing to be available to all, but it goes to – through a command and control network or an AI network – to the best shooter,” he continued. “There’s always going to be a difference between what can go on a cruiser and what can go on the back of a lance corporal who’s operating forward in the first island chain. What we talk about, though, is what is the data required to produce target-quality information? What’s the data packet look like? The form factor is going to change – whether it’s on a truck, or a ship or on a bomber or on a Marine or a soldier.”

The Navy has long acknowledged its need for a network that could pool data between ships and aircraft to conduct operations across wide maritime terrain, which led to development of the Naval Integrated Fire Control-Counter Air (NIFC-CA) network to meet this objective.But the service’s DMO and Expeditionary Advanced Base Operations (EABO) concepts envision smaller units and platforms like unmanned vessels collecting more data that would need to be transmitted to the best shooter, which could be anything from a carrier-based jet to an unmanned ship to a Marine Corps anti-ship missile ashore.

Smith said the work between the Navy and Marine Corps – which includes Deputy Chief of Naval Operations for Information Warfare (N2/N6) Vice Adm. Jeffrey Trussler and Deputy Commandant for Information Lt. Gen. Lori Reynolds – is meant to reduce the differences between the equipment the two services create and buy so that any variances are strictly because of aspects like size and weight requirements for platforms.

“It has to fit in this box because the size of a Joint Light Tactical Vehicle is X and the size of a DDG is much bigger,” Smith said, providing an example.

“If it doesn’t meet that criteria, then we at the three-star level start asking real hard questions about, well, why can’t we be the same? Because we’re looking for the same data transference, so that we hold targets at risk 24/7,” he added. “That’s what we’re all going after.”

Kilby said the Navy and Marine Corps worked together to define specific elements needed for a naval tactical grid, including how the architecture could be adaptable for other services.

“So I think that was a big step where we tried to define this at a higher level vice just a traditional requirements document for a system,” Kilby said. “Now we have to come back and say, ‘What do we think those values of are those attributes in that system? And is it flexible enough to build into the future?’”

Kilby pointed to the NIFC-CA effort, calling it the first instance where the service sought to establish requirements for multiple programs under one umbrella.

“So in order to align that from a resource and program perspective, you’ve got to throw the lawn dart far enough down to say, ‘this is what we think we’re going to do in X year in the future,’ and then set up a program to pace yourself to get there, where you can measure yourself and say, ‘yeah, we’re on track. We’re a little behind here. Or we need to apply some more resources here because we didn’t go there as fast as we could,’” he said.

“So I think that that’s what this approach with the naval tactical grid – that’s the approach we’re on to kind of lay that down in a different manner than we have in the past. I think we just have to share that with industry and be open to the fact that we may not have it solved.”

While the Navy spent years on NIFC-CA to hone integration between its own surface and aviation platforms to share targeting data, officials argue the service needs to expand its network integration to the joint force.