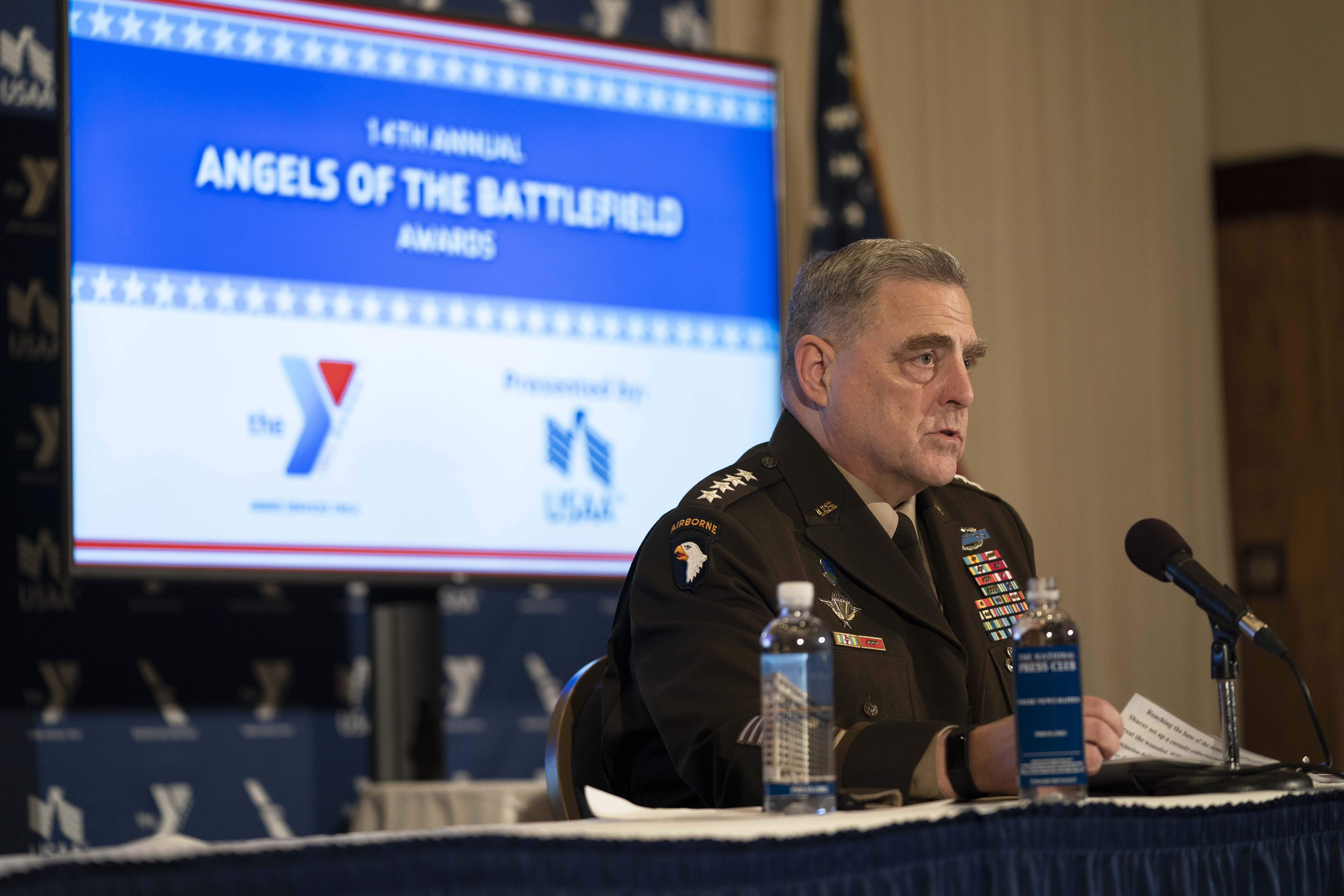 Army Gen. Mark A. Milley, chairman of the Joint Chiefs of Staff, speaks during the Armed Services YMCA 14th Annual Angels of the Battlefield award ceremony held at the National Press Club in Washington D.C., on Oct. 27, 2020. DoD Photo

“You’re a medic first and a shooter always,” is how HM1 William McGrath described what happened earlier this year as his team of Marines were racing from their compound to an East African airfield that had come under attack.

In a video presentation at the 14th annual Angels of the Battlefield awards presentation Tuesday, McGrath said one team member in the back of the truck was wounded as they approached the airfield where both aircraft, all American, and buildings were on fire.

After stabilizing the wounded Marine, who stayed in the firefight as long as he could, McGrath told the Armed Services YMCA awards ceremony, “I was the only medic on that team,” but “you still have to win the gunfight.”

McGrath told USNI News in an interview that the team had started toward the airfield about two kilometers from the compound after seeing vehicles leaving that area and hearing mortar rounds landing, rocket-propelled grenade blasts and small arms fire.

The compound was under mortar attack.

The fighting intensified as the host nation’s fire and rescue equipment arrived on the scene to bring the building fires under control.

Caring for the injured at the team’s small clinic and the host nation’s 15-bed hospital covered several days. The most seriously injured had already medevaced out.

Now based at Camp Lejeune, N.C., the independent duty corpsman said the members of his Marine Special Operations team were “hungry to learn anything they can about medicine [in their down times]. It makes you appreciate the caliber of guys you’re with.” In the interview, he said team members “wanted to help. It wasn’t just me doing medicine. Everyone was just as aggressive in caring for the casualties.”

McGrath began his Navy career 11 years ago as a rescue swimmer. Explaining why he joined the Navy, McGrath said, “I wanted to do something challenging.” But as he learned more about what corpsmen did, “I wanted to see how much more I could learn about medicine.” That included switching career fields and going through initial training. To do what he’s doing now, it meant an additional two years to qualify as an independent duty corpsman. 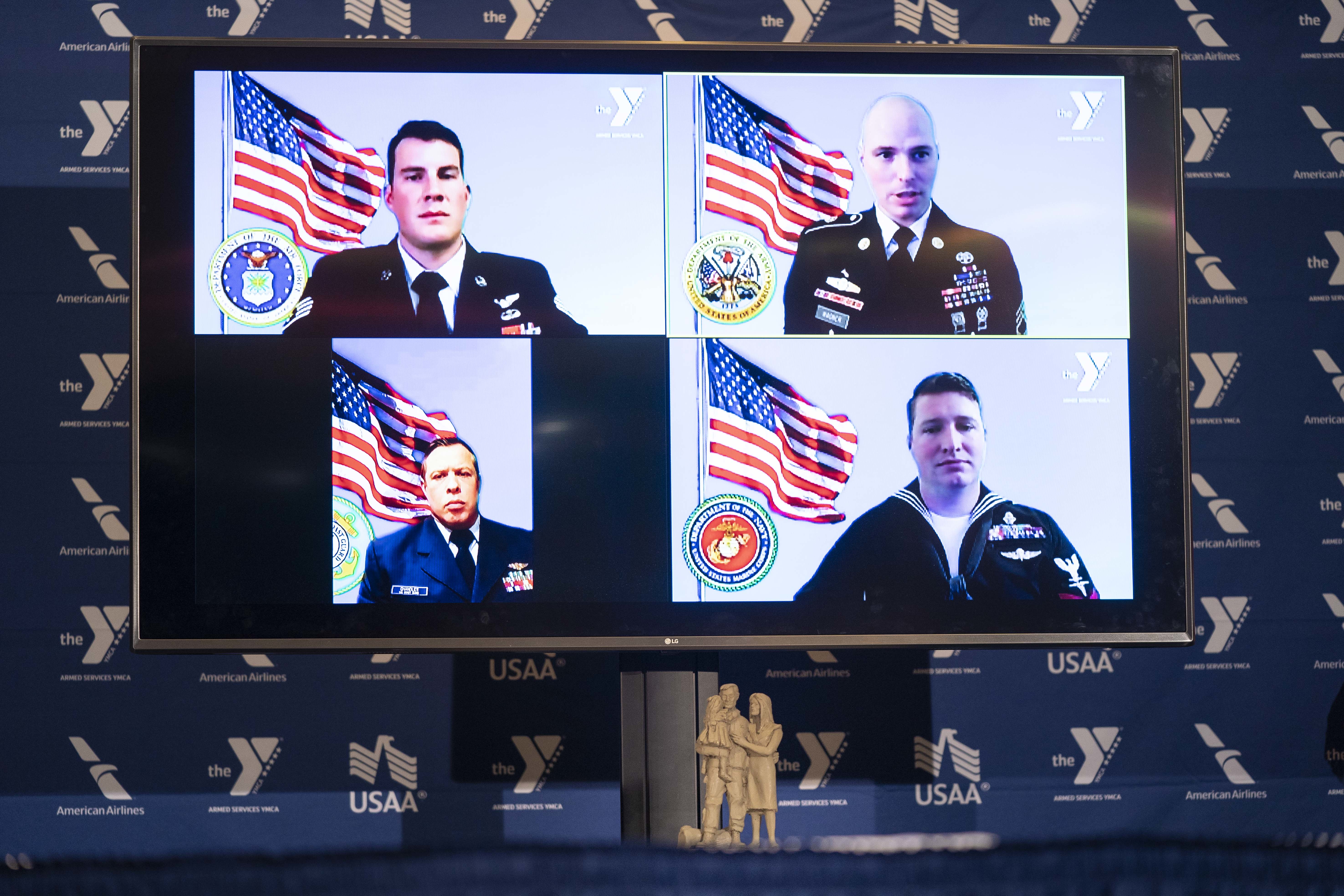 Right now, he is training with his team for their next deployment.

At the live ceremony in Washington, DC., Army Gen. Mark Milley, chairman of the Joint Chiefs of Staff, described the military medics, corpsmen and rescue service members representing the five services as “a select group of individuals … heroes of our heroes.” As an example of that service, he detailed the actions of Army Staff Sgt. Ronald Shurer, who received the Medal of Honor, for saving seven lives during a mountainside firefight in Afghanistan. The Special Forces medic, who died of cancer earlier this year, had been buried at Arlington National Cemetery earlier Tuesday.

Describing his own parents’ service during World War II, Milley said his mother served as a nurse at a Navy hospital in Seattle while his father was a corpsman who served with the 4th Marine Division at Kwajalein, Saipan, Tinian and Iwo Jima.

During the war in the Pacific, Benson, now 100 years old, served as a 2nd lieutenant in the Army Nurse Corps. Believed to be the oldest surviving Army nurse, she told the live audience and those viewing online, “I made sure my patients never died alone,” so I could tell their families “I was holding their hand when they passed.”

One of nine children, her four brothers had already enlisted. Benson, who lives in McLean, Va., said she believed writing “was comforting” knowledge to the families of soldiers, sailors, airmen and Marines to tell them their loved ones had not died alone.

Benson, who established field hospitals in Hawaii, Okinawa and Japan, met her husband, Bill, during the war. They had three children. While her husband remained in the Army Reserve, she continued her career as a civilian surgical nurse. “I was blessed with longevity,” she said.

Born in England, Aviation Survival Technician 2James Chandler was on a Coast Guard team responding to an emergency in the aftermath of Tropical Storm Imelda’s 2019 flooding of much of Houston. “The weather was enough” to find a landing spot for their MH-65 Dolphin near Julia Weisinger, who was suffering from an aneurysm. She had grown dizzy and could not continue driving. Her daughter had tried to assist her mother, but the rising floodwaters made driving impossible. When Chandler arrived, Mrs. Weisinger was unresponsive. Getting both women to the helicopter, “I attached my medical equipment to her,” Chandler said, and the helicopter immediately lifted off for the 30-minute flight to a Houston hospital as he was closing the door.

Referring to Mrs. Weisinger’s daughter, he said, “I cannot imagine what was going through her mind” in the rescue by helicopter and watching her mother receive treatment.

For the first time, the citation noted, he was performing CPR on a live patient. “I knew I wasn’t going to stop” doing chest compressions until she was transferred to the hospital medical staff. He praised the crew he flew with from Air Station Houston, identified in news accounts as Lt. Sean Kshimetski and Petty Officers 1st Class Andre Ramos.

The experience showed him “how precious life was,” Chandler said.

The award honoree for the Navy went to a SEAL, based at Naval Amphibious Base Coronado, Calif. He is deployed and the service kept his name confidential.

In a written statement, he thanked the Armed Services YMCA for “this special award.” He added, “I am grateful for the continued opportunity to serve my country and my teammates.” 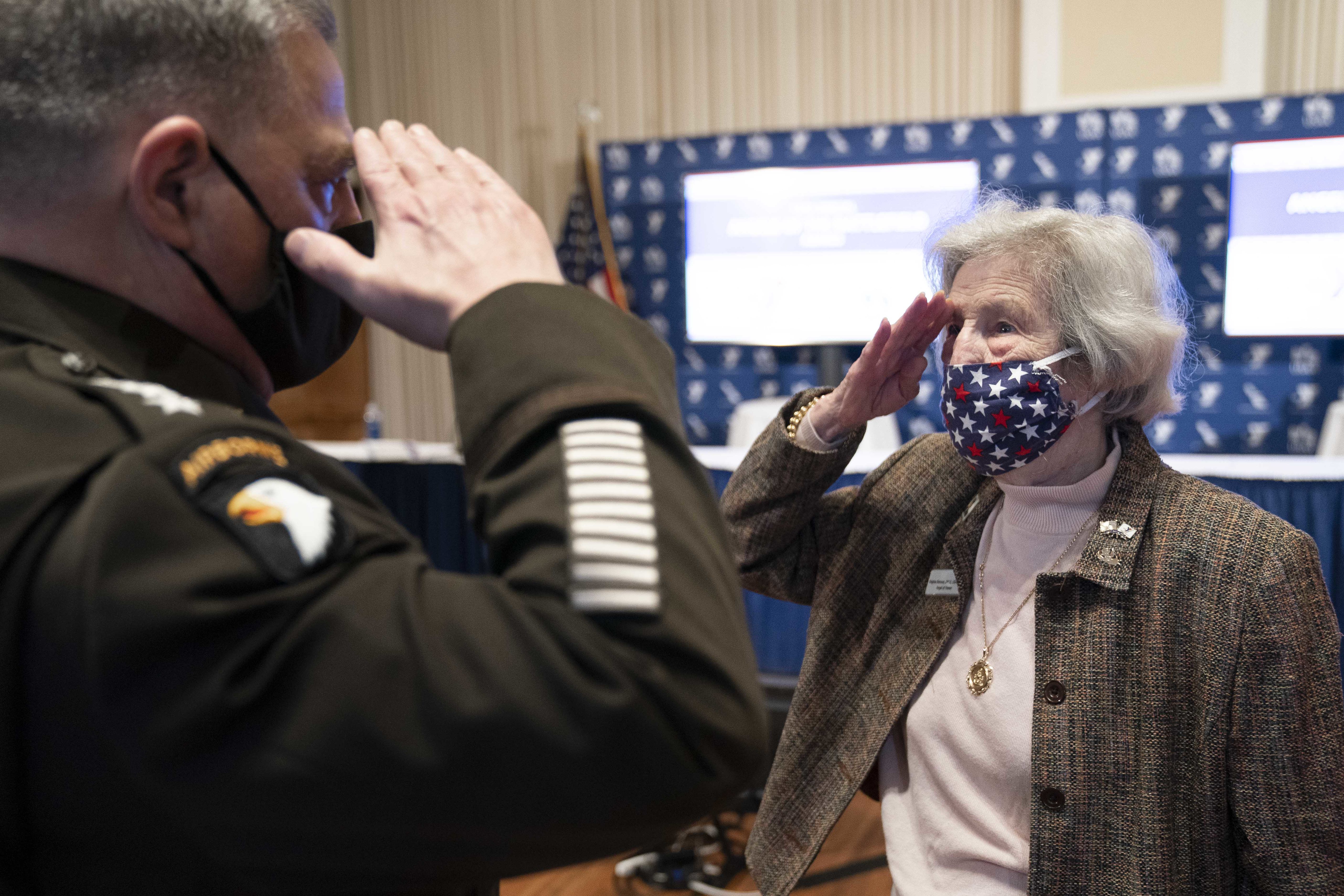 Regina Benson, 100, a former Army Nurse Corps 2nd Lieutenant who served in the Pacific Theater during World War II, and Army Gen. Mark A. Milley, chairman of the Joint Chiefs of Staff, salute one another during the Armed Services YMCA 14th Annual Angels of the Battlefield Awards during a ceremony held at the National Press Club in Washington D.C., Oct. 27, 2020. DoD Photo

Retired Vice Adm. William French, chief executive officer of the Armed Forces Y, said recommendations for the awards come from the services’ surgeons general and criteria involve saving lives. The idea for the award was rooted in the Y’s own history as the “Angels of the Battlefield” during World War I and its involvement with the armed forces dating to the Civil War.

In 2006, the organization “was looking for an event we could do in Washington to recognize the military’s first responders – the corpsmen, the medics” for the work they were performing in Afghanistan and Iraq,” and the awards ceremony continued.

While the COVID-19 pandemic caused a major shift in plans from a large in-person gala to a mix of in-person and virtual, French said, “we never would take a pass. We agreed we would recognize the honorees.” Dorene Ocamb, chief development officer, said the organization is looking forward to next year, when it will mark the 160th anniversary of its founding and the 15th anniversary of the Angel of the Battlefield awards.

Looking back on what he does, Chandler said, “I have the best job in the world.” On being selected, he said, “I am truly in the presence of heroes.”

In her acceptance remarks, Benson expressed a similar thought. “We worked together and served together,” describing her service during World War II and the mood of the nation at the time. “Sadly, it may never be equaled again,” she said.