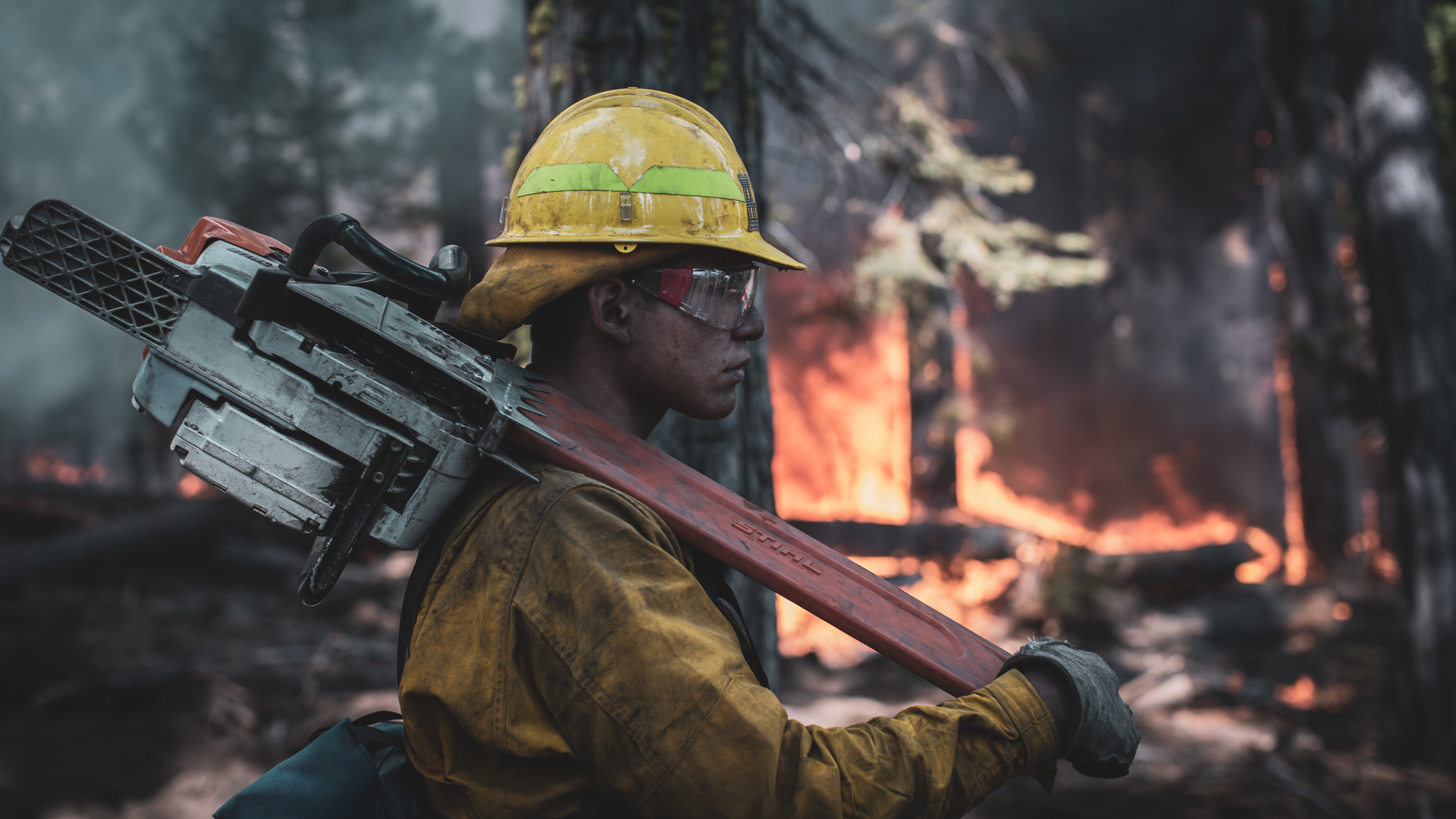 CAMP PENDLETON, Calif. – A platoon of Marines, just weeks out of the wildland firefighting training they received here at Camp Pendleton, recently were able to tackle a critical mission not typically given to military units less familiar with battling the raging California wildfires: with flames threatening a critical helicopter landing zone needed for firefighting efforts and evacuations, the Marines were told to create a fireline and save the helo pad.

As heavy-equipment operators, the Marines from Charlie Company, 7th Engineer Support Battalion (ESB) know how to drive and operate bulldozers. So with the tools they’re used to operating but a mission they were just recently trained for, they set out to save the helo pad supporting thousands of crews, including 250 Marines from their battalion battling the sprawling August Complex Fire.

“We got to walk the dozer line and say, hey, this is where we need to put the line to prevent the fire from taking up more thousands of acres,” said Chief Warrant Officer 2 Andrew Heisinger, the heavy equipment platoon commander who led a strike team of 18 of his Marines.

The fire “was circling the helo pad,” Heisinger said, recounting the mission shortly after he and the Marines returned to Camp Pendleton on Oct. 21 after the month-long mission. “We built the fireline and we prepped it, taking chainsaws, cutting through 20 feet in so the fire couldn’t cross the line, and then we actually got to back burn” to control the fire’s movement.

Professional dozer operators ran the heavy equipment while “we got to run the drip torches,” he said. “Then we held the line, making sure nothing came across and spread and… mopped it up.”

Heisinger said they were tasked with stuff they just don’t really allow real green Marine crews to do.” A federal firefighter leading a fire division that comprised several strike teams, including professional firefighters from Idaho, Alaska and the Camp Pendleton Fire Department, happened to be a former Marine – and “we showed him that we were there to work,” Heisinger said, “and he allowed us to do that.” 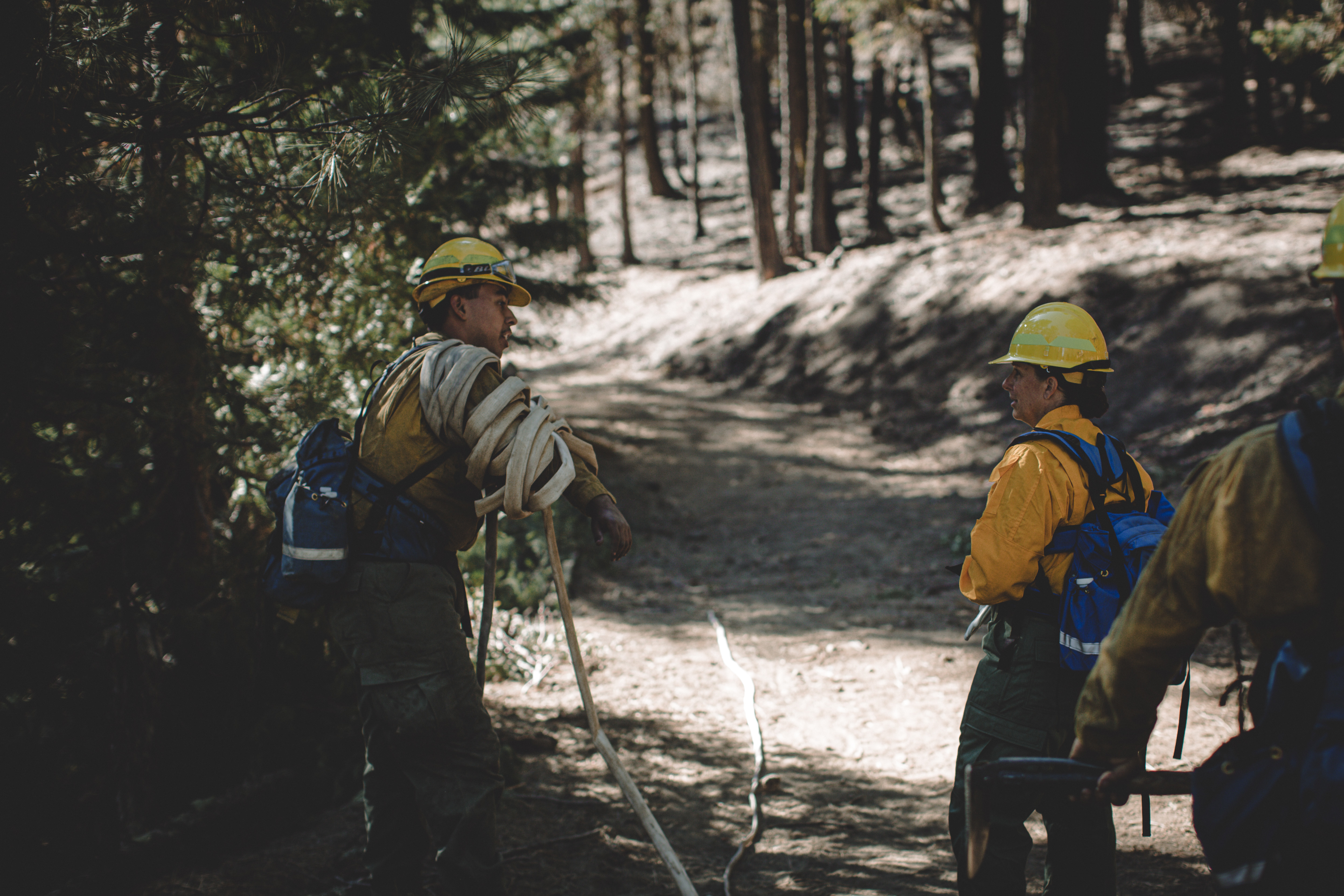 Brig. Gen. Bobbi Shea, the 1st Marine Logistics Group commander, visited battalion Marines Oct. 17 and walked the fireline where the platoon had helped quash the fire, Heisinger said. Briefed by fire officials, “she blacklined it on the map. It was awesome,” he said. Black lines on a fire map means the area “is controlled, they don’t have to worry about it anymore. She put the Marine Corps stamp on it.”

Shea, in comments to USNI News, hailed 7th ESB’s work and contribution to the wildfire mission.

“Every federal, state and local leader I spoke with had high praise for our Marines and sailors. That does not surprise me one bit,” she said in an email response. “These Marines are tough, seek out hard task and always deliver. I am proud of each and every one of them.”

“Marines respond readily to challenges in service to their nation, it’s in their DNA,” she added. “I think the same grit and values we need to serve overseas in defense of our nation are applicable in many environments. That is probably why so many of the firefighters serving alongside us are veterans.”

Into the Fire Fight 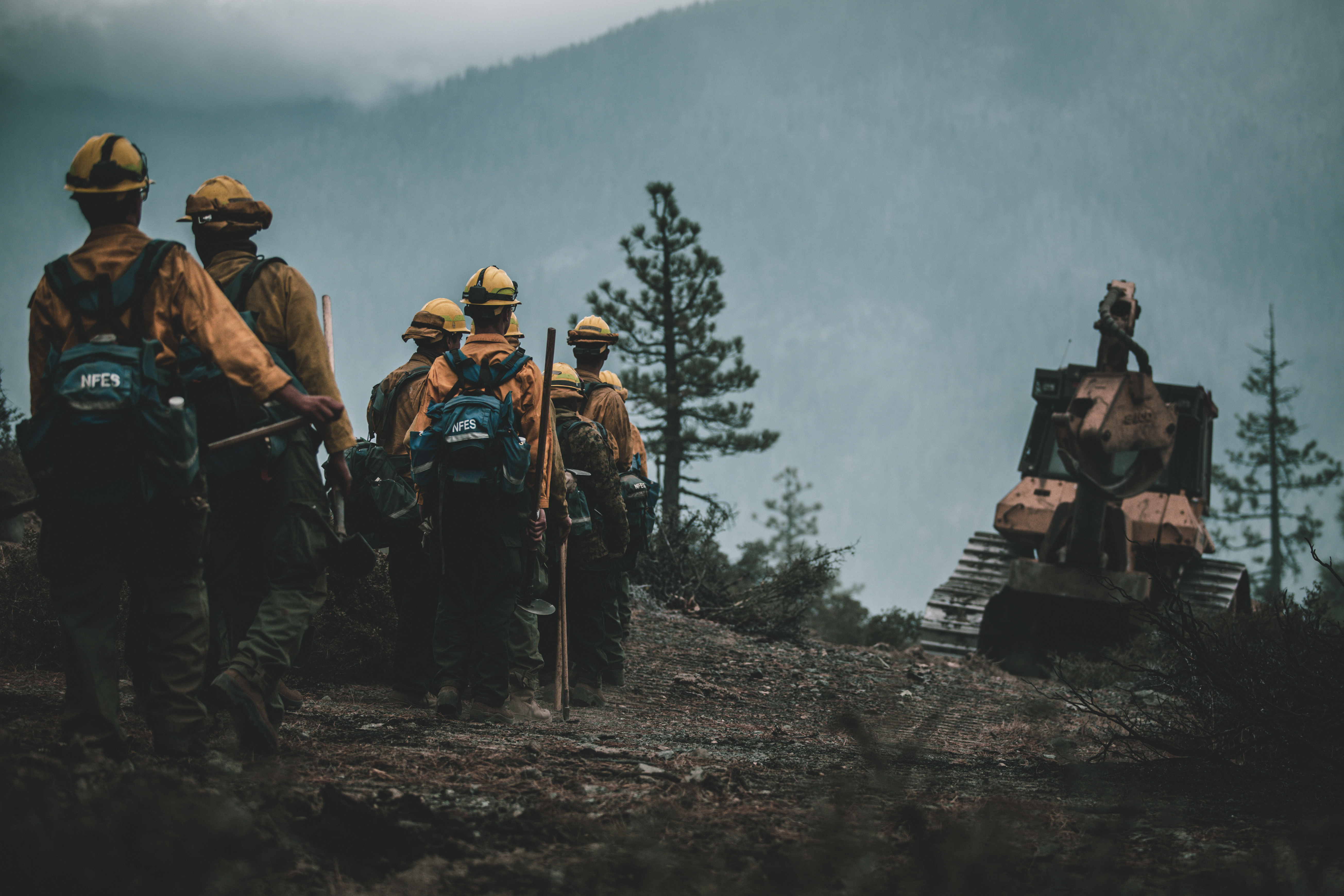 The 1,300-member 7th ESB sent 250 Marines and sailors to support the federal wildfire efforts in two of California’s largest wildfires so far this year. The initial focus was the Creek Fire, which began Sept. 4 in the Sierra National Forest in east-central California. As of Oct. 23, it had burned nearly 358,000 acres and was 61-percent contained. After about two weeks, they redeployed to the August Complex Fire, which began in mid-August in the Mendocino National Forest and, as of Oct. 23, had scorched 1.03 million acres but was 92-percent contained.

U.S. Northern Command in August tasked U.S. Army North to oversee the military ground response to support the Idaho-based National Interagency Fire Center. Some 250 soldiers with the Army’s 14th Brigade Engineer Battalion from Joint Base Lewis-McChord, Wash., deployed to the August Complex from Sept. 3 to Sept. 27.

“The soldiers, sailors and Marines learned and adapted quickly to wildland firefighting while maintaining a focus on their own safety and their crew’s safety in the midst of the COVID-19 pandemic,” Lt. Gen Laura Richardson, who commands ARNORTH and NORTHCOM’s Joint Forces Land Component Command, said in an Oct. 20 news release. 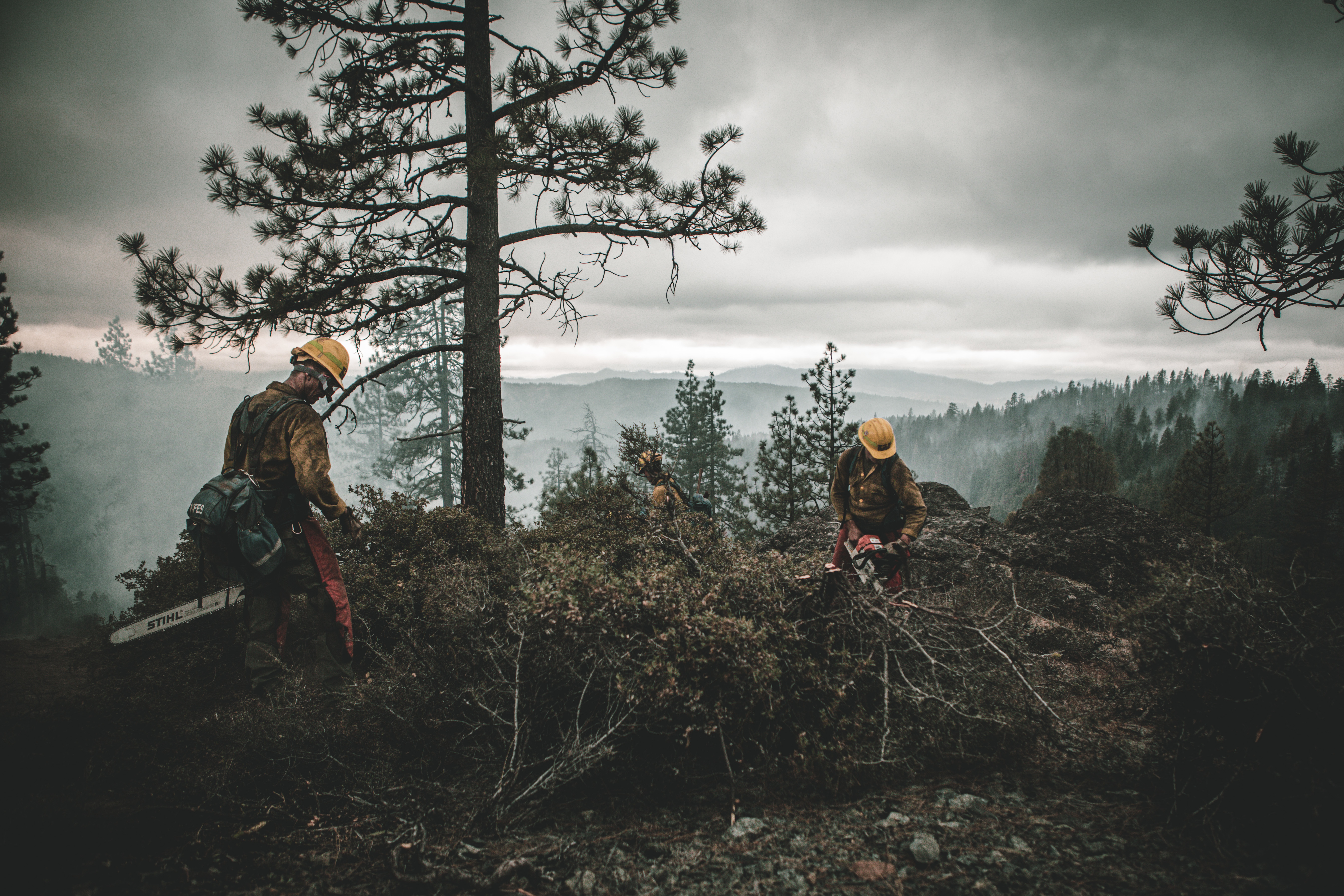 “It was pretty awesome to see the signs, the posters that they put up there for the Marines to see on the way to engage the fires,” said Guillen, a combat engineer. In the end, the unit appreciated doing a mission to help protect public lands, keeping civilians safe “and giving them a little bit of hope in such a tragic situation.”

“They are pretty much well prepared to conduct these operations if they are ever get called to do them again,” he said. “They’re now the guys we’re going to look for in the future – when they become staff sergeants or sergeants or gunnery sergeants – to kind of paint that picture to younger Marines that they may get an opportunity to get called to do something like this. These guys have another story to tell.”

On the fourth day working the Creek Fire, a local man approached them “and said, ‘hey that’s my cabin up there. You guys can stay in that. You saved it,’” Heisinger recalled. “We’re like, no, we’re good.” That encounter hit home. “It’s not just you’re following a fire and trying to put it out,” he added. “You’re saving that guy’s home, that family’s home.”

“They wanted their name out there – yeah, that was my chunk of ground. They wanted ownership so they could come back and (say), yeah, we helped that fire,” he added. “They can go out camping with their families and say, this is the chunk of ground that we worked on, that we held, that we saved that cabin.”

On-the-Job Training in the Fire Zone 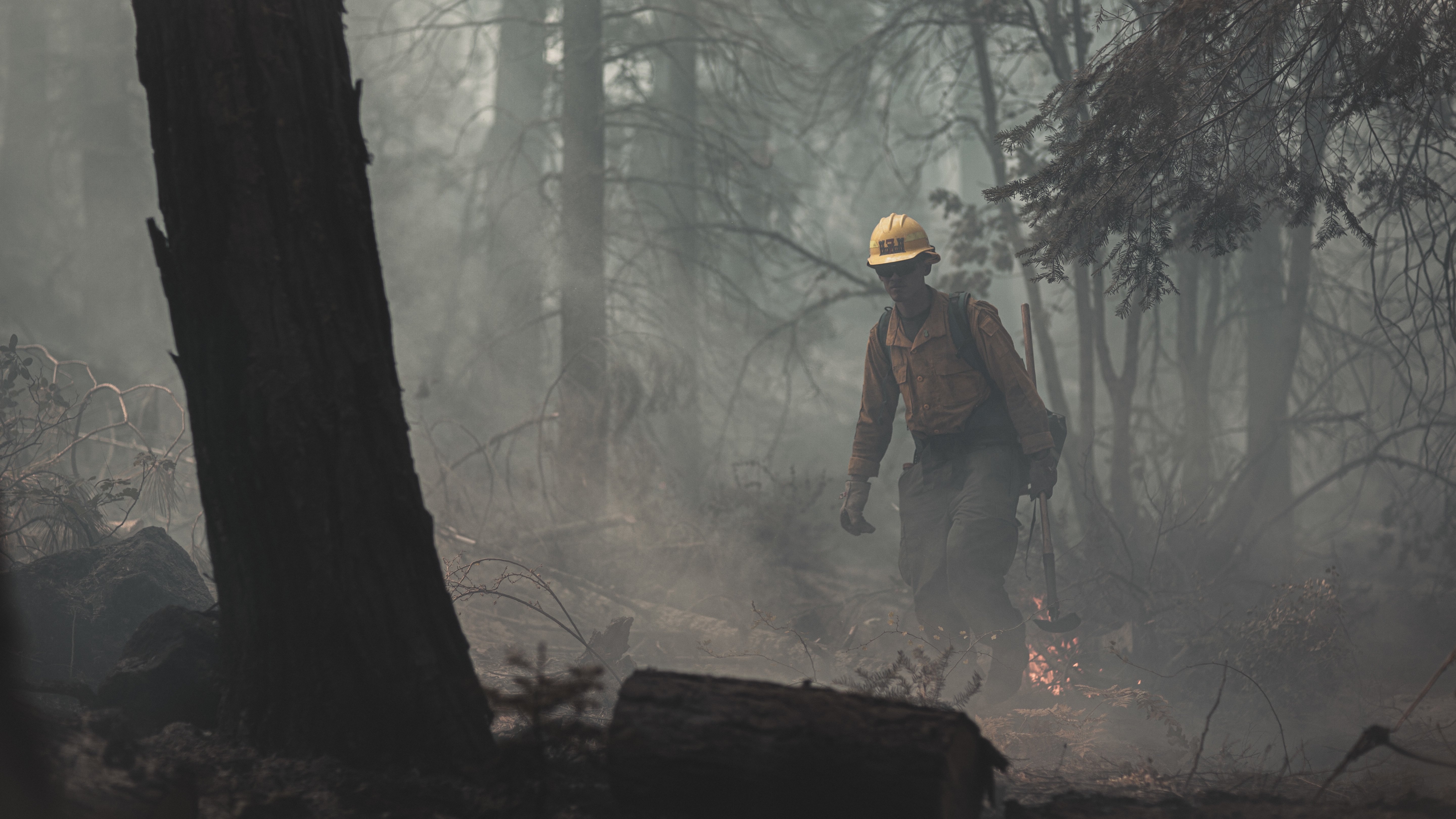 Arriving at the Creek Fire base camp, the Marines and sailors got two days of on-the-job training and familiarity with tools including the Pulaski axe, McLeod rakes and chainsaws used to fell trees and help limit fire spread. They operated radios, drip torches, water pumps and other wildfire tools. They split into 20-member handcrews – the U.S. Forest Service calls them “the infantry of wildland firefighters” – and formed strike teams organized into fire divisions. Each day, after 5:30 a.m. reveille at the outdoor bivouac, they packed their lunches and drove in rented SUVs with embedded firefighters to their objective, which was sometimes an hour’s drive along winding roads. There were no days off during the mission.

“The initial plan was for us to head up to the Creek Fire,” Guillen said. They later redeployed to the August Complex fire, where taller trees posed additional dangers from snags or falls and more debris like pine needles provided added fuel for the fire.

Most strike teams returned nightly to base camp, while others spent two or three days at one location. Some strike teams did mop-up operations, “turning soil looking for hot spots by feeling the ground and using water and the Pulaskis to churn the dirt,” Guillen said. Others “actually conducted operations as a ‘Hotshot’ crew,” which use drip torches to burn flammable materials and create firelines to stop a fire’s spread.

“We were fortunate enough to be trained and quickly adapted to the situation and the environment to the point that the firefighters allowed the Marines in certain strike teams to actually conduct ‘Hotshot’ type of operations,” he said. “That just speaks volumes to… the firefighters going out there trusting these Marines.”

Heisinger took command of the platoon July 1, and the deployment was their first time in the field. His platoon “learned how to work together. They shared the same conditions, whether good, bad, no showers, heat, working in dust where you come back and your face is black and you can’t get clean,” he said. “They shared in that same – as we call in the Marine Corps – suck.” 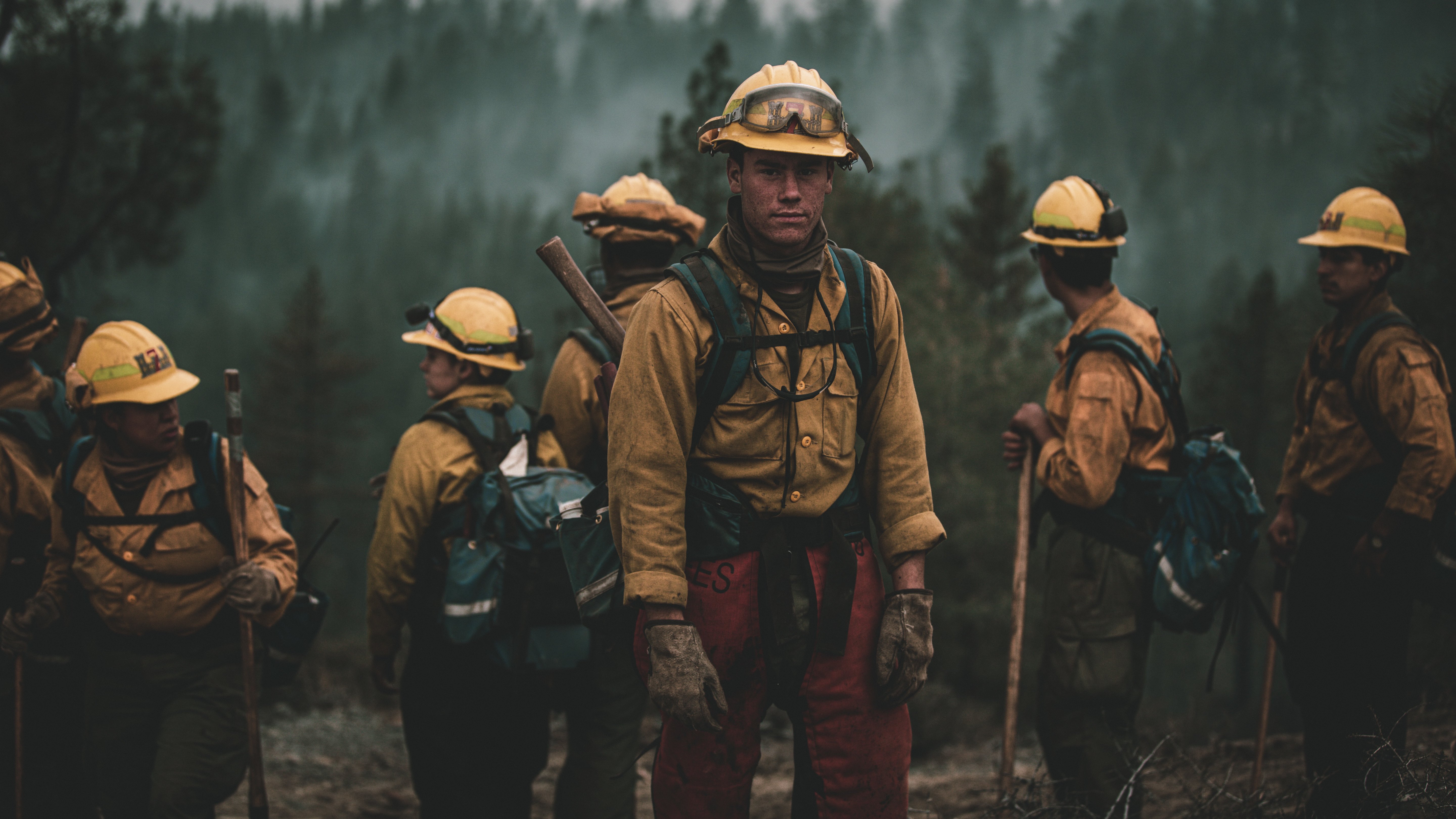 Instructors “did a tremendous job in training the Marines, becoming a team, having that unit cohesion,” he said. “At the end, it was kind of bittersweet having to say goodbye. It was pretty phenomenal to see how they became a unit, working towards the same effort, same mission. It was fun seeing them every night come back, being extremely motivated. They were dirty, they were tired, but they were still hanging out within their strike teams and building that camaraderie.”

Every day was different. There’s a process to fighting a terrain fire, so work included digging lines, putting out fires, gridding for hot spots and mopping up the area before moving onto another site.

“We got dirty quite a few days, did a lot of hiking,” said Hospital Corpsman 3rd Class Emily Behr. “One of our locations was fairly steep, and we had to go up and down that creek multiple times a day. It was a good mile and a half stretch by the end of it that we were patrolling, looking for hotspots, looking for smoke and seeing if there was any heat or anything like that. Trees falling was a big thing – snags, as they call it – so we were looking for that.”

At both fires, strike teams worked at elevations of 7,000-feet. Nights were chilly and the air was smokier at the Creek Fire. Strike team members “were troopers,” Behr said. “It’s a hard day’s work. Some days we weren’t doing as much, others we’re non-stop. They handled it very well. They made sure everyone took care of everyone. They made my job easy. There were minimal injuries.”

The mission “made me more mentally stronger,” she said, adding “maybe could be a career. But I enjoyed it. As a corpsman, I think it made me better suited to be out in the field and take my experiences and go.”

The experience has piqued interest among some Marines for firefighting as a future career. “We’re looking at ways to work with the U.S. forestry or other agencies to see what would be required for some of these Marines that are interested in transitioning for that type of line of work for them to get a (certification) card,” Guillen said.