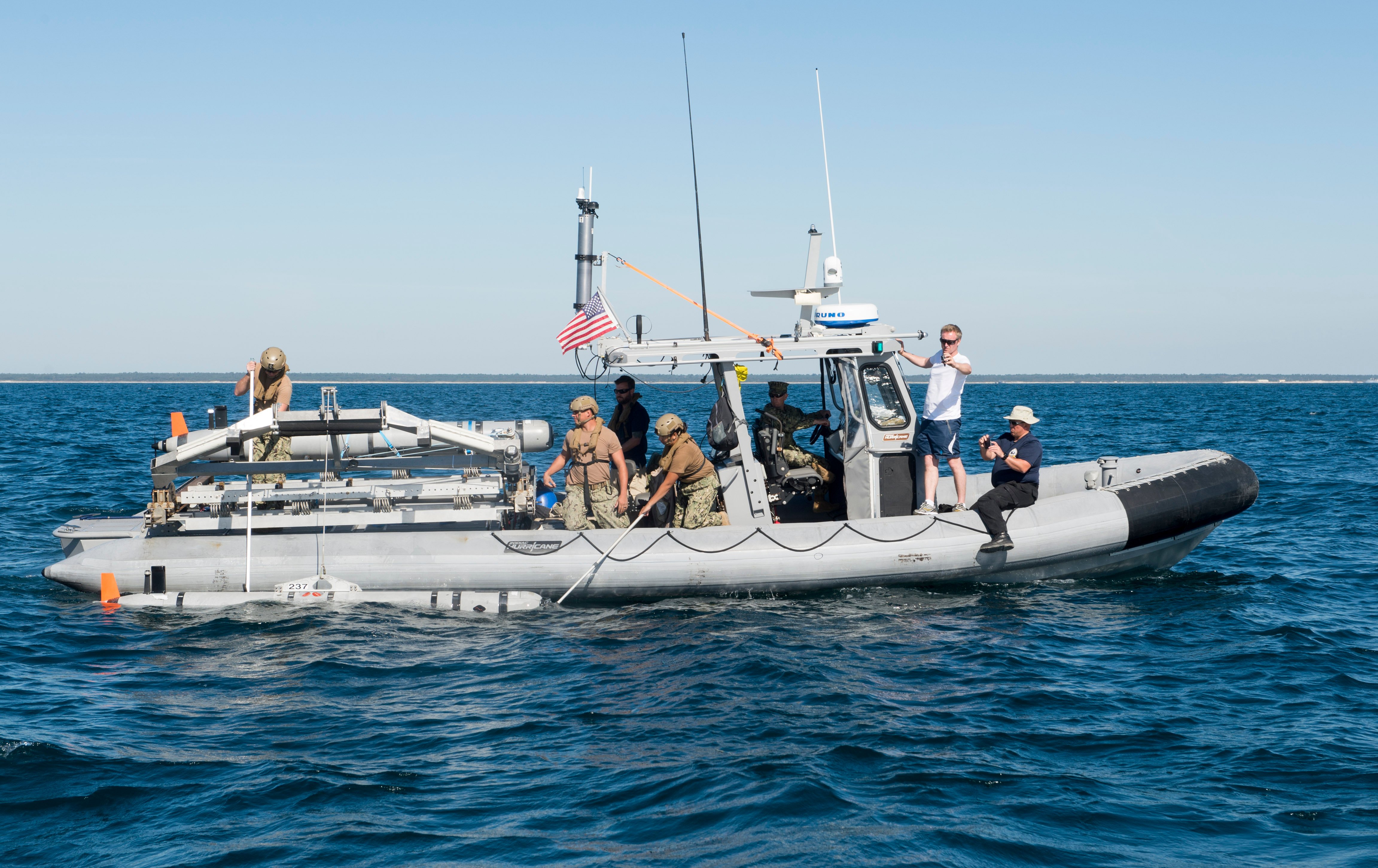 Sailors from the Royal Netherlands Navy and Royal Canadian Navy observe Sailors assigned to Mobile Diving and Salvage Unit (MDSU) 2 unmanned systems platoon deploy a Mark 18 Mod 2 unmanned underwater vehicle during an expeditionary mine countermeasures evolution as part of exercise Bold Alligator 2017 (#BA17) on Oct. 21, 2017 at Camp Lejeune, N.C. Improving Navy-Marine Corps amphibious core competencies along with coalition, NATO, Allied and partner nations is a necessary investment in the current and future readiness of our forces. US Navy photo.

The Navy explosive ordnance disposal community is beginning to implement a strategic plan meant to modernize the force for the next decade of fighting in a complex world marked by great power competition.

Rear Adm. Joseph DiGuardo, the commander of Navy Expeditionary Combat Command, recently signed off on the Navy EOD Strategic Plan 2020-2030, which keeps Navy EOD’s main roles – clearing hazards and securing an area for a naval force to enter, building battlespace awareness to detect threats during operations, and protecting the space until the force is ready to move on – but seeks to modernize the gear and the tactics to keep up with peer and near-peer threats.

“In today’s environment of great power competition, Navy EOD needs to continue to evolve to support the fleet and the joint force in daily competition against peer and near-peer nation states,” Capt. Oscar Rojas, the commodore of EOD Group 1 in San Diego, told reporters during an Oct. 22 media roundtable.

These main objectives come together in a way that takes Navy EOD’s current missions and tools and helps propel them forward.

For example, the EOD force already uses unmanned underwater vehicles to search the undersea for potential threats – and help identify and examine anything that’s found – as well as build domain awareness for the incoming naval force. Going forward, according to the strategic plan, that could include the UUVs penetrating enemy networks and incorporating cyber warfare.

“Navy EOD will develop and employ unmanned systems (UxS) with communications relay and transmission capabilities that insert themselves into enemy networks, not to destroy individual network nodes, but to discover, probe, map, and manipulate the adversary network,” the plan reads.
“The information obtained will be transmitted to friendly forces who can mount more sophisticated cyberattacks on those networks in order to disrupt, delay, or destroy the WMD or conventional weapon pathways.” 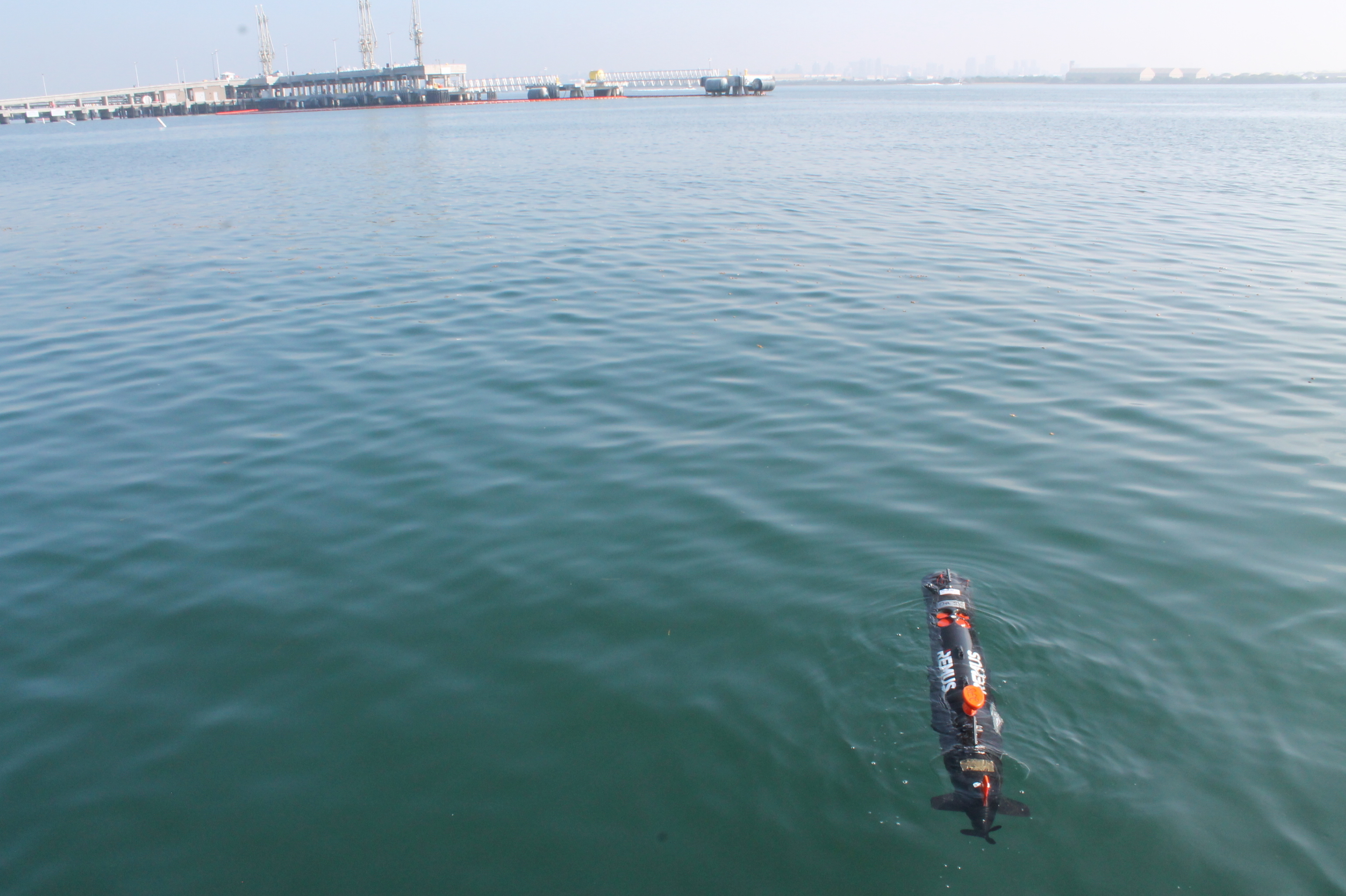 Last November, the Navy EOD community released a 2030 strategic vision, which laid the groundwork for this new plan. Since that time, a group of junior officers and senior enlisted sailors have been working on writing the 36-page plan, which Rojas said will now enter the operationalization phase.

Last year, when rolling out the new strategic vision document, Rojas and his East Coast counterpart, Capt. Rick Hayes, the commodore of EOD Group 2 in Virginia Beach, said that lessons learned from nearly two decades of ground wars had informed their ideas of how to conduct complex maritime operations with a peer adversary. For example, rather than trying to clear an entire area in Iraq and Afghanistan of roadside bombs, EOD units instead cleared a single route through the area to quickly get troops past the danger and to their objectives. In the maritime realm, the same could be done, abandoning the old model of “mowing the lawn” and ensuring an entire waterway is clear of mines, and instead focusing on creating a safe lane for ships or landing vessels to sail through to get sailors and Marines to their objective.

The commodores also said they were aiming to use unmanned systems in all domains and advances in machine learning and big data tools to cover more area and create a better domain awareness, all while keeping operators farther from potential hazards.

All of this still holds true in the strategic plan; but while the EOD groups were hard at work writing their document over the last year, several other big things happened to the naval force: Marine Corps Commandant Gen. David Berger has taken big steps to overhaul how the Marine Corps will conduct amphibious operations, specifically to support the expeditionary advance base operations (EABO) concept, and the Pentagon recently released a Battle Force 2045 plan to grow the Navy to about 500 manned and unmanned ships, with several new classes of ships that could both support EOD operations, but will also consume a massive amount of money in the coming decades.

“The bottom line up front is that this (EOD strategic plan) is not in competition with any of those efforts of the fleet modernization; this complements those efforts,” Rojas said.
“The strategic plan was informed by the previous and the existing [Program Objective Memorandum], the approved POM that we have, and also our existing programs of record. So in that POM process it’s very well defined and it forecasts future spending and the resources we will have available, so based on that we believe that this strategic plan is executable and it complements the efforts that the fleet is putting in place for force modernization.”

Hayes said that, prior to taking over the East Coast and West Coast EOD Groups, he and Rojas both served in the Pentagon as Navy resource sponsors for EOD, “so we fully understand the tug of war and some of the challenges that exist at the Echelon I level when it comes to budgeting and modernization and all of that. And I’m happy to report – or at least I believe – that our efforts are going to be in lock step with the modernization plans that the Navy has in place for its future fleet.”

For example, one of the main focuses of Navy EOD in recent years is the Expeditionary Mine Countermeasures (ExMCM) unit construct. Rojas said the ExMCM units were specifically built to be platform-agnostic – they can be inserted by Navy surface ships, commercial ships or even submarines, and can parachute in from aircraft – as well as sensor-agnostic, in that they primarily use the Mk 18 family of unmanned underwater systems today but could transition to another kind of system in the future, as long as it gives them the domain awareness they need.

“The opportunity, as the fleet grows, we believe that ExMCM will easily adapt to the new platforms that are being developed,” Rojas said of the several new kinds of ships planned in Battle Force 2045, including smaller amphibious ships and logistics ships, optionally manned small combatants and light carriers.

Hayes added that, with Battle Force 2045’s great support for unmanned vehicles in all domains, “the Mk 18 is our tool of choice today, but it may not necessarily be our tool of choice in the future. So if we have other unmanned systems in the water, whether they be UUVs or USVs or other sensors in the water that help us build that domain awareness in the undersea domain, we see that as another place where we can integrate with the fleet to better assess the threats that might exist under water and on the surface and then to potentially counter those threats if they do exist.” 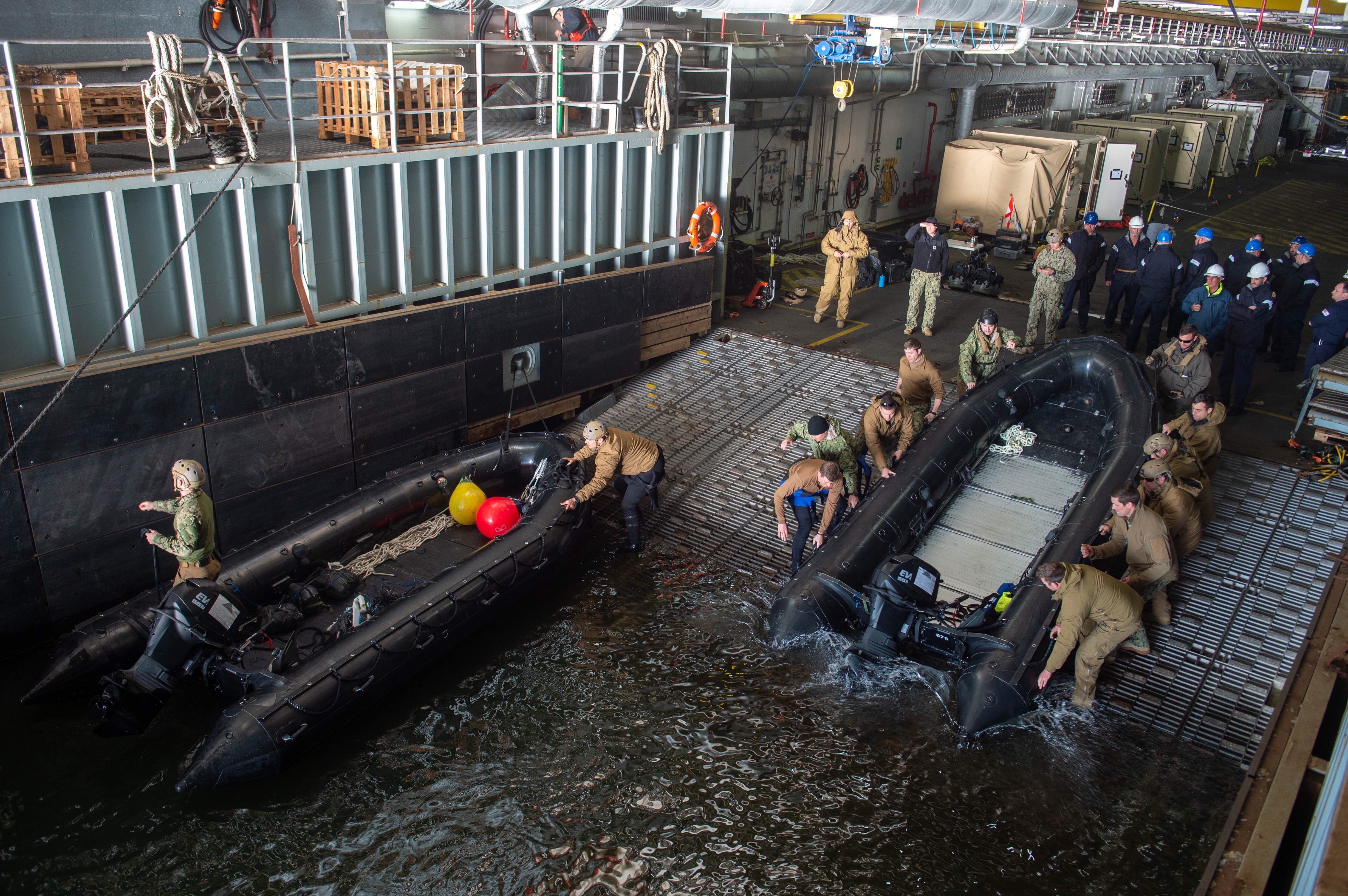 Hayes also said that the Navy EOD roles hold up even in the new operational concepts coming out of the Navy and Marine Corps.

When it comes to “clear, secure, build and protect missions,” he said, “whether you’re doing expeditionary advance base operations or advance naval base operations or distributed maritime operations, we’ll go where the fleet needs us, we’ll go where the joint force commander needs us. If they’re establishing a beachhead on an island somewhere, we’re the ones that will help clear the explosive hazards in that area. We’ll make sure that the area is secure so the joint force can operate basically uncontested. We’ll help build domain awareness in the things that we do with regards to maybe exploitation of enemy weapons systems so we have a better understanding of the adversary’s weapons and ordnance that they may use against us. And then we protect the force: that’s one of our primary mission areas is force protection to ensure that there is no threat from adversary’s ordnance, explosives or weapons systems. So, whether it’s distributed maritime operations, expeditionary advance bases or advance naval bases, EOD plays a key role in all of that.”

Lt. Nick Stoner, a naval EOD officer currently serving in EOD Group 1’s Commodore’s Action Group where he works on strategy and innovation, said during the media call that the EOD force would need several technological advances to make this strategic plan reality.

Adding new autonomy behaviors to unmanned vehicles, pairing sonar and machine learning to create better undersea domain awareness, and new tools to keep people farther from potential threats are all on the priority list, Stoner said. He noted that the EOD Groups are tightly connected to industry and academia; for example, on autonomy behaviors, EOD units in the field that recognize the need for a new behavior from their UUVs can talk to engineers and get their request to the top of the priority list for development and then rapidly test solutions in the field to aid in development.

Rojas said that “I think this is the exciting part as we go into the next decade, is that over the last two, three years the business practices we’ve been using have allowed us to accelerate capability development. And what I mean by this is, we have EOD operators working hand in hand with the engineers in order to rapidly bring in input from the field to the lab as it’s being processed and further developed and then sent back in the field for evaluation and, in many cases, real-world employment. We don’t do this just within DOD; we are working with industry … to accelerate innovation, rapid prototyping and fielding, to advance these technologies.”

Rojas said that, while the strategic plan was written by and for EOD officers and sailors, it also serves as a great tool to communicate intent with joint force and interagency partners, and to communicate with industry and academia on upcoming technology needs.

Hayes said many of the Navy EOD captains just this week spoke with the NavalX unit in Hampton Roads, Va., to discuss ways to leverage that organization to communicate research and development needs.

Overall, Hayes said, “we recognize that this is an ambitious, forward-leaning course that gives us a little more focus on the development of training, technology, procurement and most importantly the development of our warfighter and warfighters to best support our traditional missions while placing an emphasis on supporting the joint force primarily and specifically in the maritime environment.”