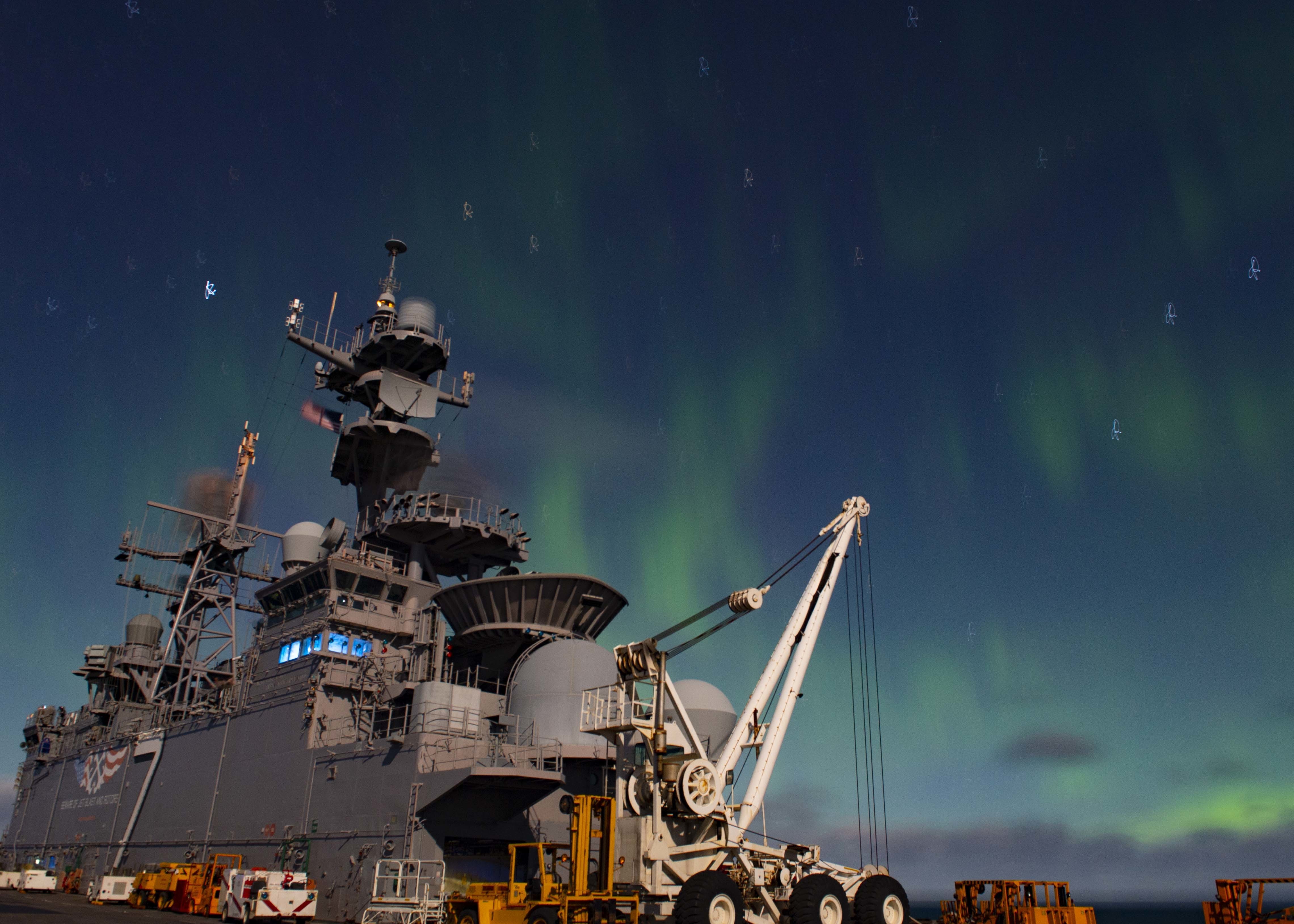 USS Iwo Jima (LHD-7) passes under the Northern Lights while participating in exercise Trident Juncture 2018 on Oct. 26, 2018. US Navy Photo

SAN DIEGO, Calif. – The Navy rolled out a Naval Expeditions (NavalX) Agility Office that will connect sailors with innovative ideas to experts who can experiment with them, invest in them or contribute to turning the ideas into something tangible for the Navy.

Navy acquisition chief James Geurts today unveiled the new office at the WEST 2019 conference, hosted by the U.S. Naval Institute and AFCEA. NavalX will not attempt to host its own innovation projects, but rather will serve as a matchmaker between those with ideas and those with knowledge and resources to further those ideas, and between separate labs or groups working on related projects.

“We’re kicking off an effort I’m calling NavalX, Naval Expeditions. Expedition is an arduous task where you’ve got to bring technology and courage and all your MacGyver skills, all that together in one place. What this really is is not as much of a glitzy innovation store as much as a set of capabilities that anybody can access. So if you’re a sailor out there and you’ve got a great idea and you want to crowd-source something, what do I need from you? I need your idea. I don’t need you to be an expert on how to crowd-source, write that contract,” Geurts said.
“So if we can, with this NavalX, start putting here this set of tools that everybody can use efficiently, we’ll get our agility up.”

Geurts said there are already great pockets of innovation in the Navy and Marine Corps – and throughout the Defense Department – but they’re not always aware of what each other is doing, and they don’t always have clear lines of communication when they do want to reach out to overcome challenges or share ideas.

After his keynote speech, Geurts told USNI News that he views this office as a tool for others in the Navy and Marine Corps to use, rather than a source of or host for innovation. Past efforts, such as a Naval Innovation Advisory Council, had a heftier hand in coordinating or hosting research, experiments or other efforts, but Geurts said he hopes to differentiate NavalX by avoiding that trend.

“Sometimes these innovation cells get a little bit self-focused, and then they want to be the ones with all the brilliant ideas, and it’s kind of exactly the opposite: I don’t want them to have any of the brilliant ideas, I want them to be able to take all the brilliant ideas that are sitting in this room (at the conference) and be able to push them forward efficiently,” he said. Speaking of his staff – currently two people in Geurts’ office and three outside the office who will assist, though more will likely be added as the effort takes hold – Geurts said, “I call them sherpas, their job is to help you on your journey; their job’s not to tell you how to do your journey.”

In addition to connecting people and offices, NavalX will also codify best practices, write playbooks and case studies, host events for training and engagement and provide digital tools online to support greater agility in the Navy. The aim of the office is to improve “pivot speed” in bringing in new gear, implementing new practices and otherwise preparing the services for a potential high-end conflict.

According to the NavalX website, for innovators “NavalX empowers you with the information and relationships you need to immediately apply agility practices in your organization.” For leaders, “NavalX lowers the barrier for your organization to employ a variety of proven tools and methods that improve your speed and boldness.” And for industry, “NavalX allows you to easily connect into an ecosystem of potential opportunities that includes investment, experimentation, and technology transfer.”

Geurts made clear in his rollout that he is serious about using this office to create a new culture for how the Navy approaches agility and innovation.

“We have to achieve this at scale. We can’t do it as a one-off, cute little demo things,” he said.
“If we’re going to be relevant and compete and win, we’ve got to do that at scale.”