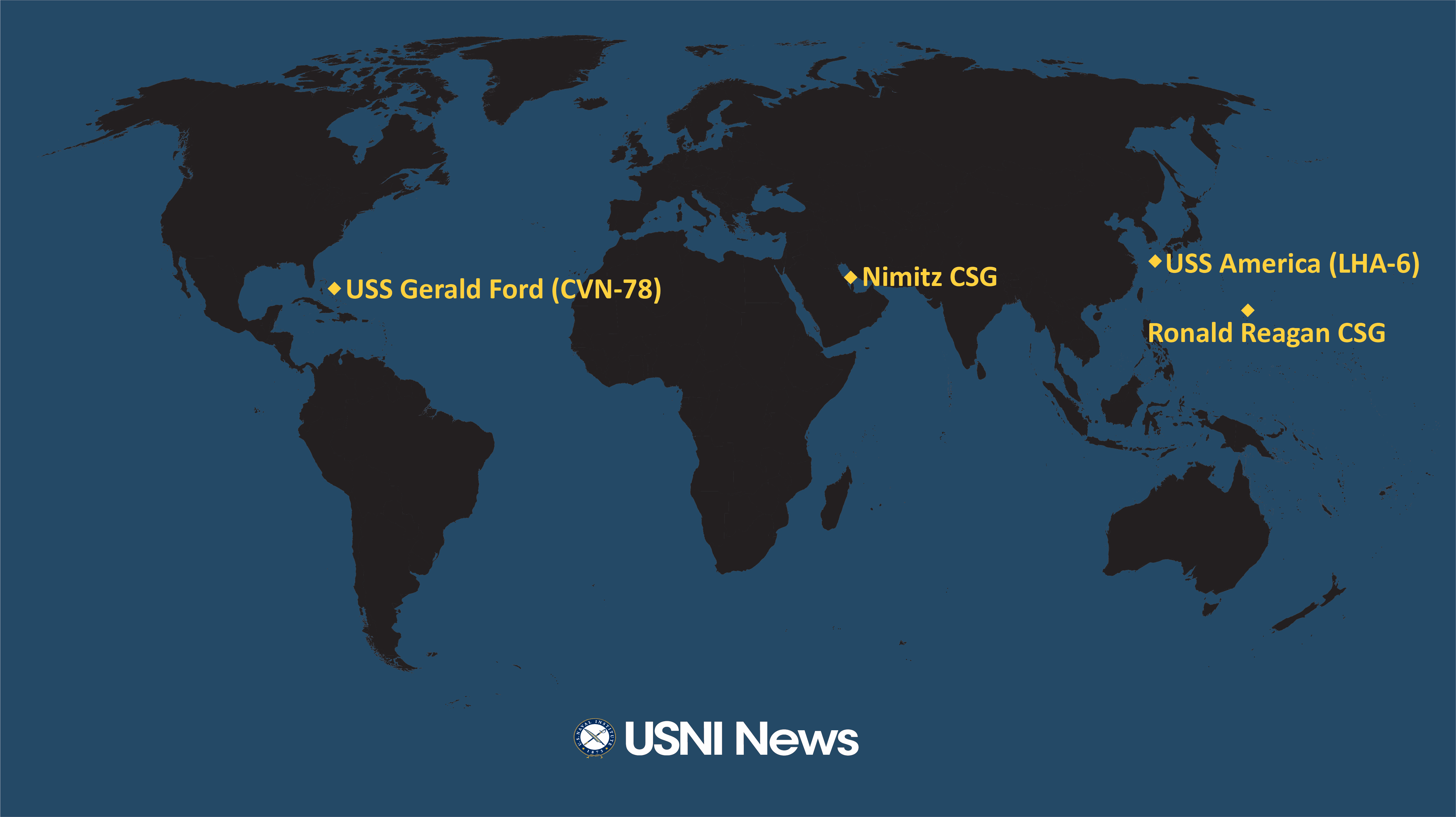 These are the approximate positions of the U.S. Navy’s deployed carrier strike groups and amphibious ready groups throughout the world as of Sept. 21, 2020, based on Navy and public data. In cases where a CSG or ARG is conducting disaggregated operations, the chart reflects the location of the capital ship. 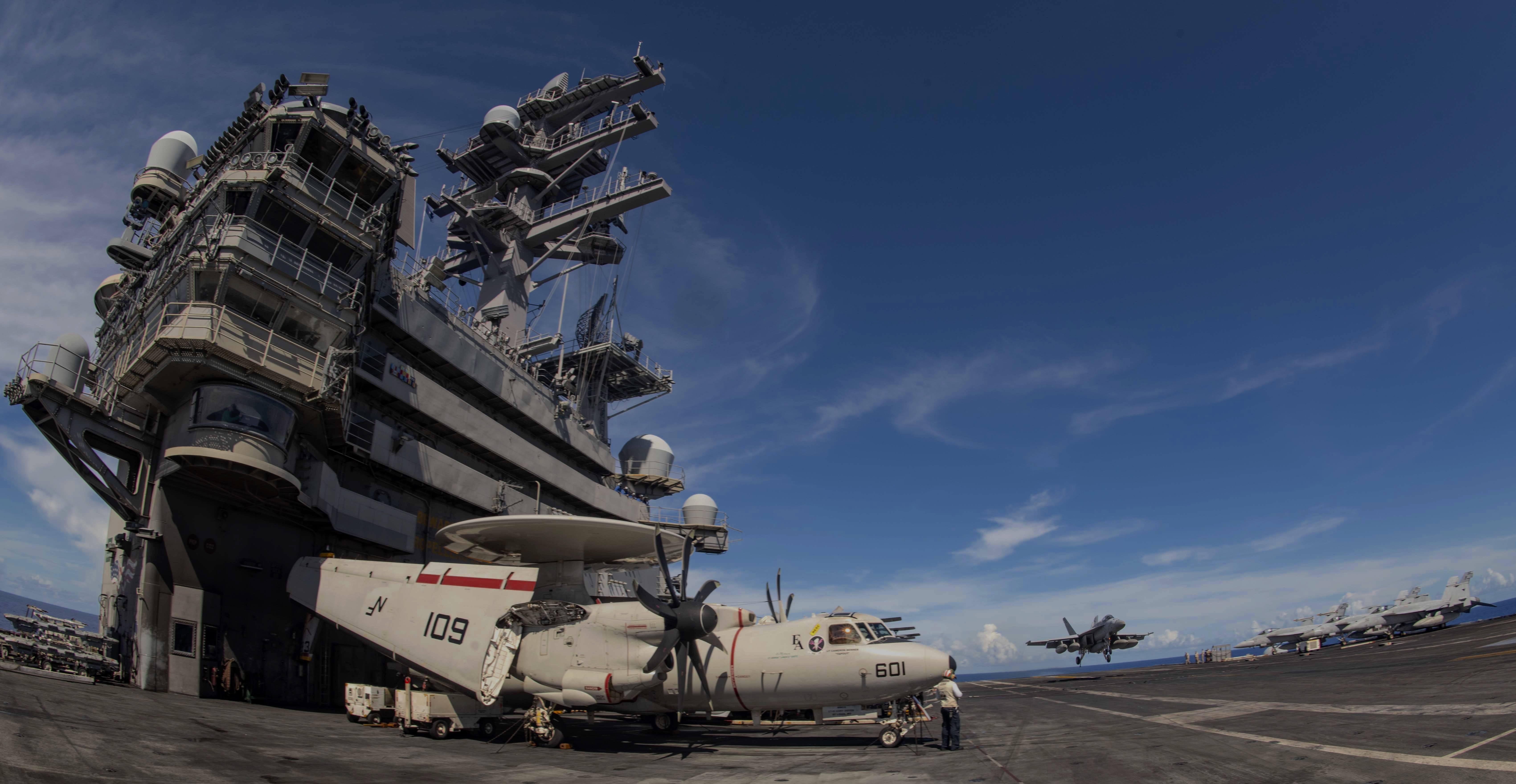 An F/A-18E Super Hornet attached to the ‘Royal Maces’ of Strike Fighter Squadron (VFA) 27 lands on the flight deck of USS Ronald Reagan (CVN-76) in support of exercise Valiant Shield 2020 on Sept. 16, 2020. US Navy Photo

The Ronald Reagan Carrier Strike Group (CSG) and amphibious assault ship USS America (LHA-6) are underway in the Philippine Sea as part of the Valiant Shield exercise running from Sept. 14 to 25 on Guam and around the Mariana Islands Range Complex.

“Valiant Shield focuses on integration of training in a blue-water environment. This training enables real-world proficiency in sustaining joint forces through detecting, locating, tracking, and engaging units at sea, in the air, on land, and cyberspace in response to a range of mission areas,” according to U.S. Indo-Pacific Command.

This is the eighth exercise in the Valiant Shield series that began in 2006. 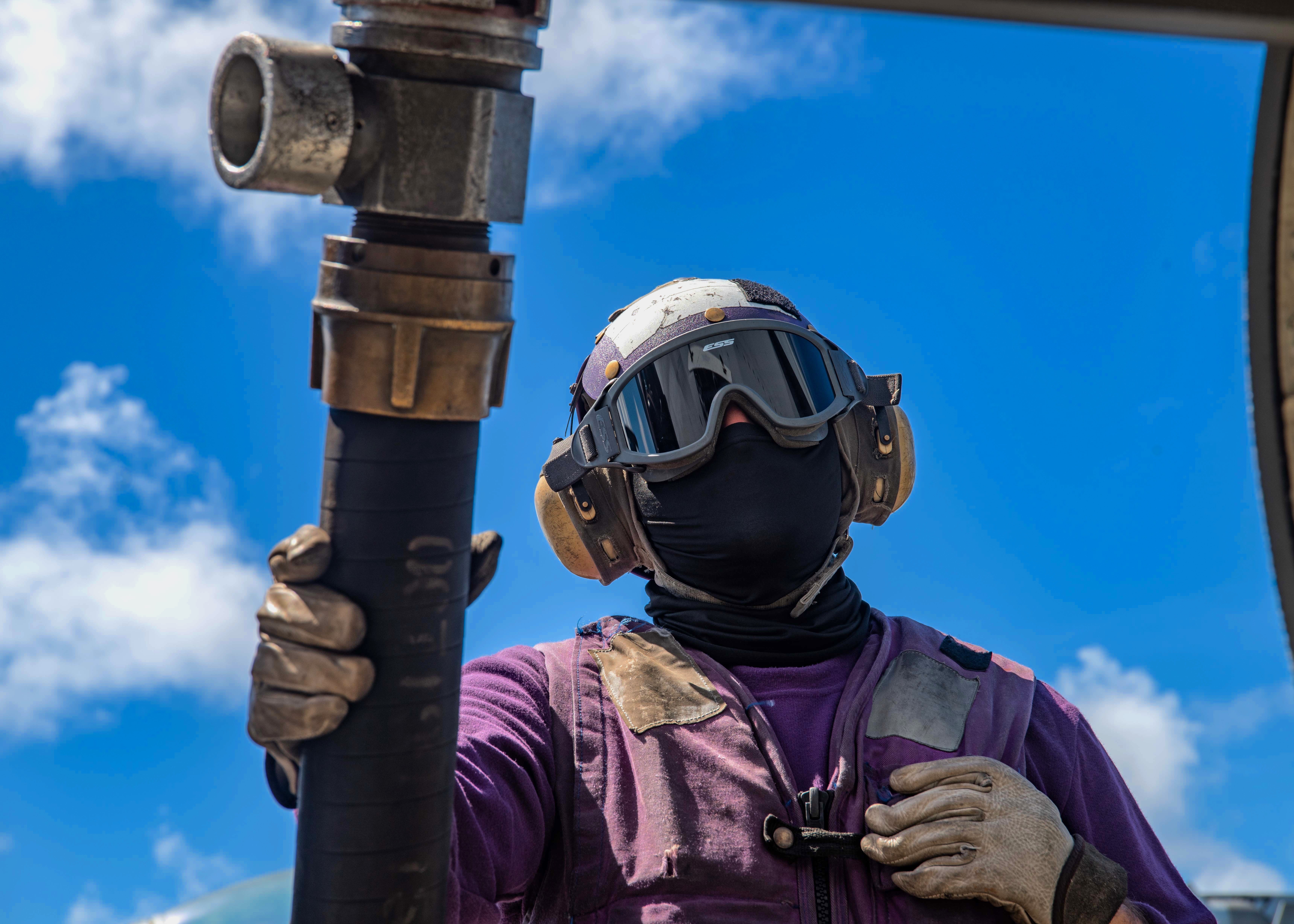 Yokosuka-based Carrier Strike Group (CSG) 5 commands the Reagan CSG and is embarked on the carrier. 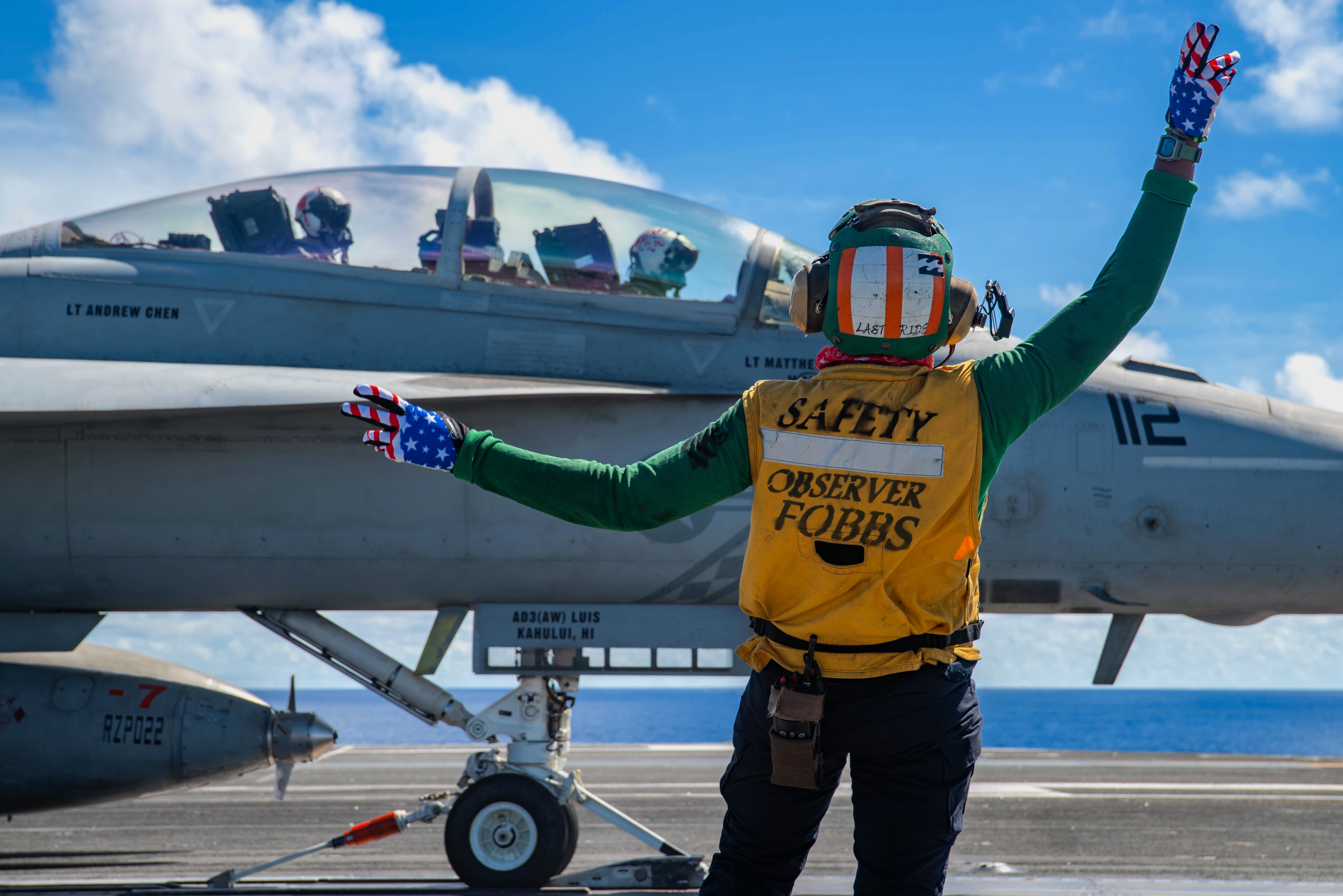 Sailors on bridge of USS Antietam (CG-59). US Navy Photo 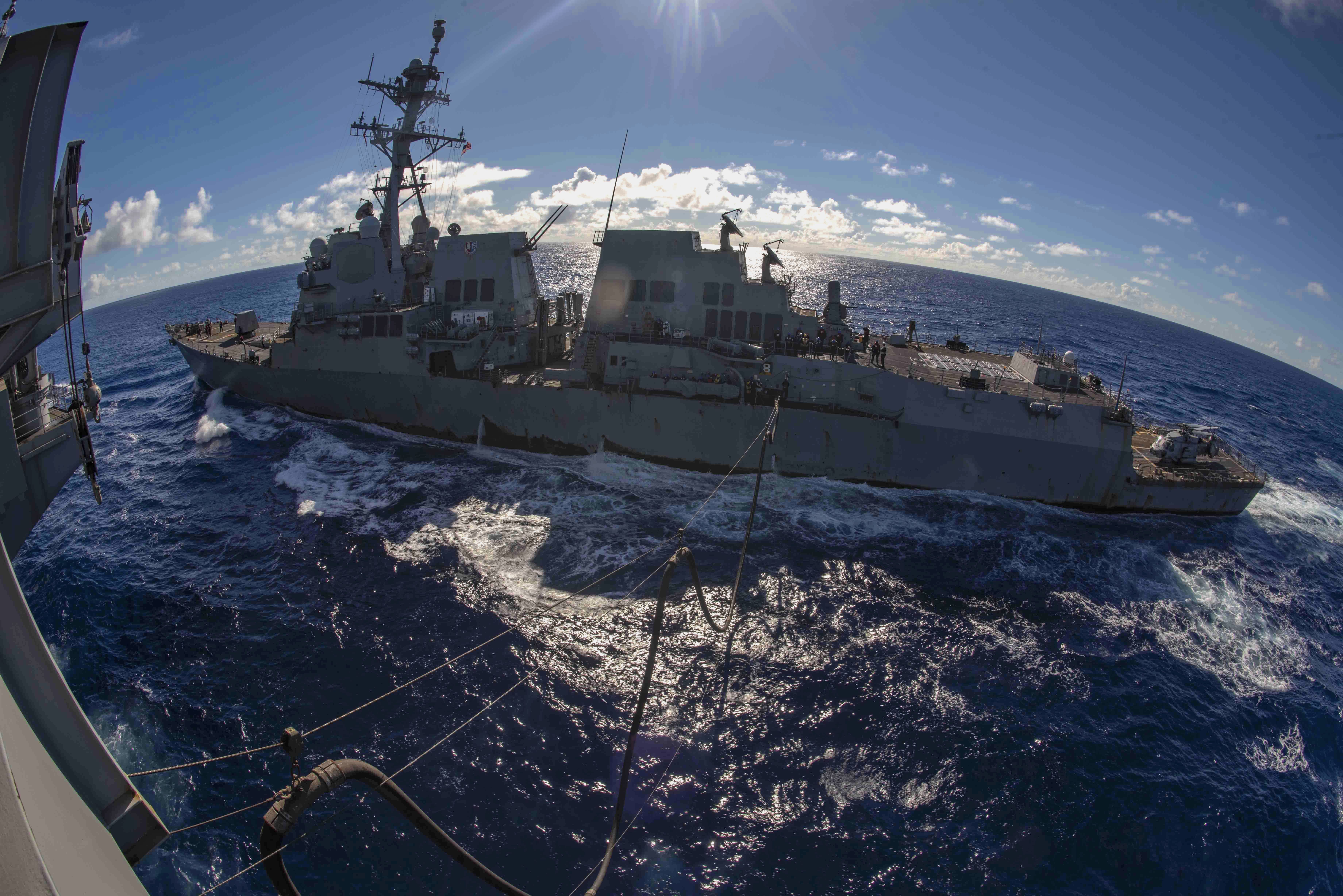 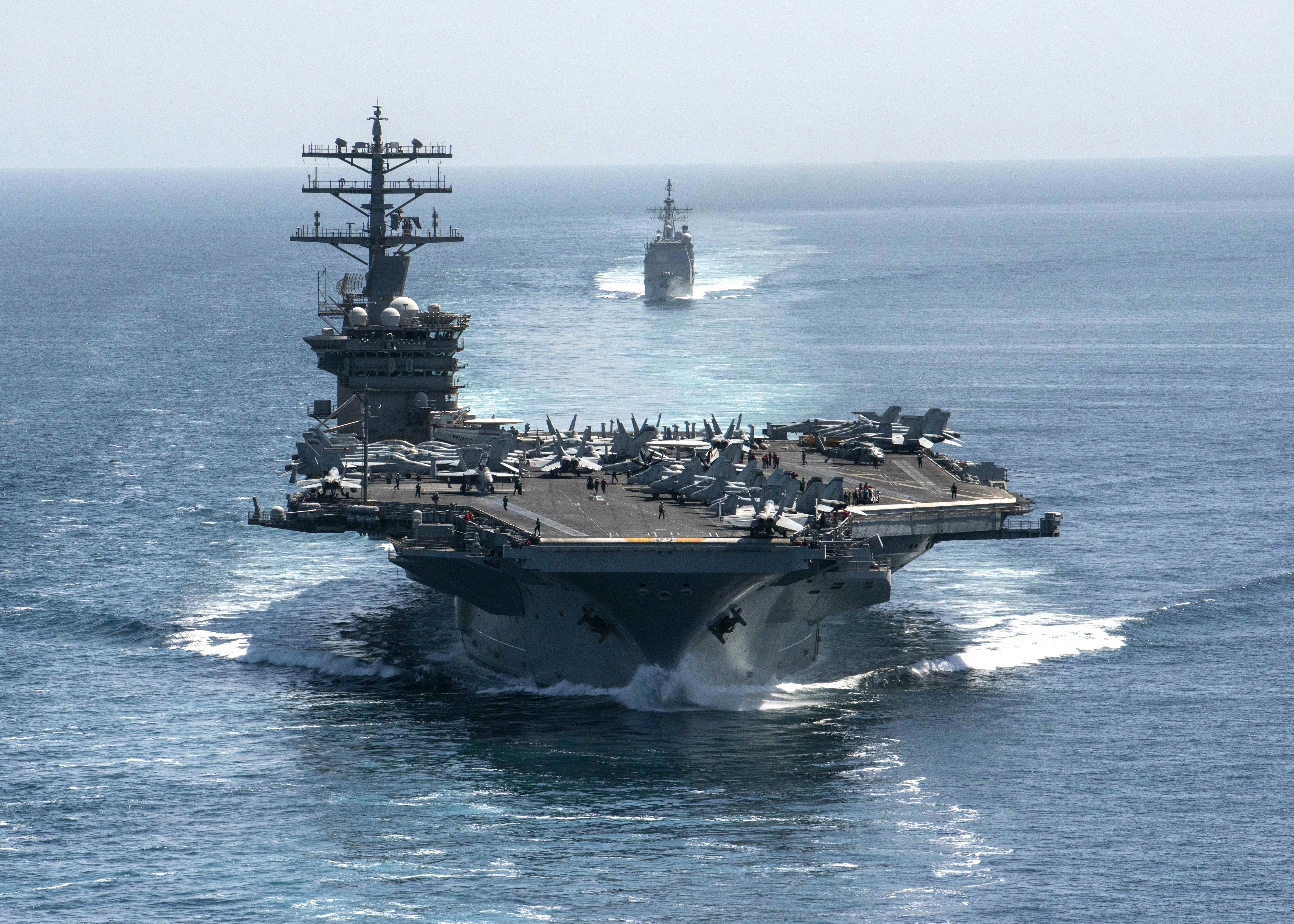 For the first time in ten months, a U.S. aircraft carrier is now operating in the Persian Gulf, U.S. 5th Fleet announced on Friday morning.

“The [Carrier Strike Group] will operate and train alongside regional and coalition partners, and provide naval aviation support to Operation Inherent Resolve,” read a statement from 5th Fleet.

The U.S. has maintained a constant carrier presence just outside the Persian Gulf in the North Arabian Sea and the Gulf of Oman since May of 2019, when Lincoln was rushed to the region as a hedge against Iran at the request of U.S. Central Command head Gen. Kenneth McKenzie and then-National Security Advisor John Bolton. 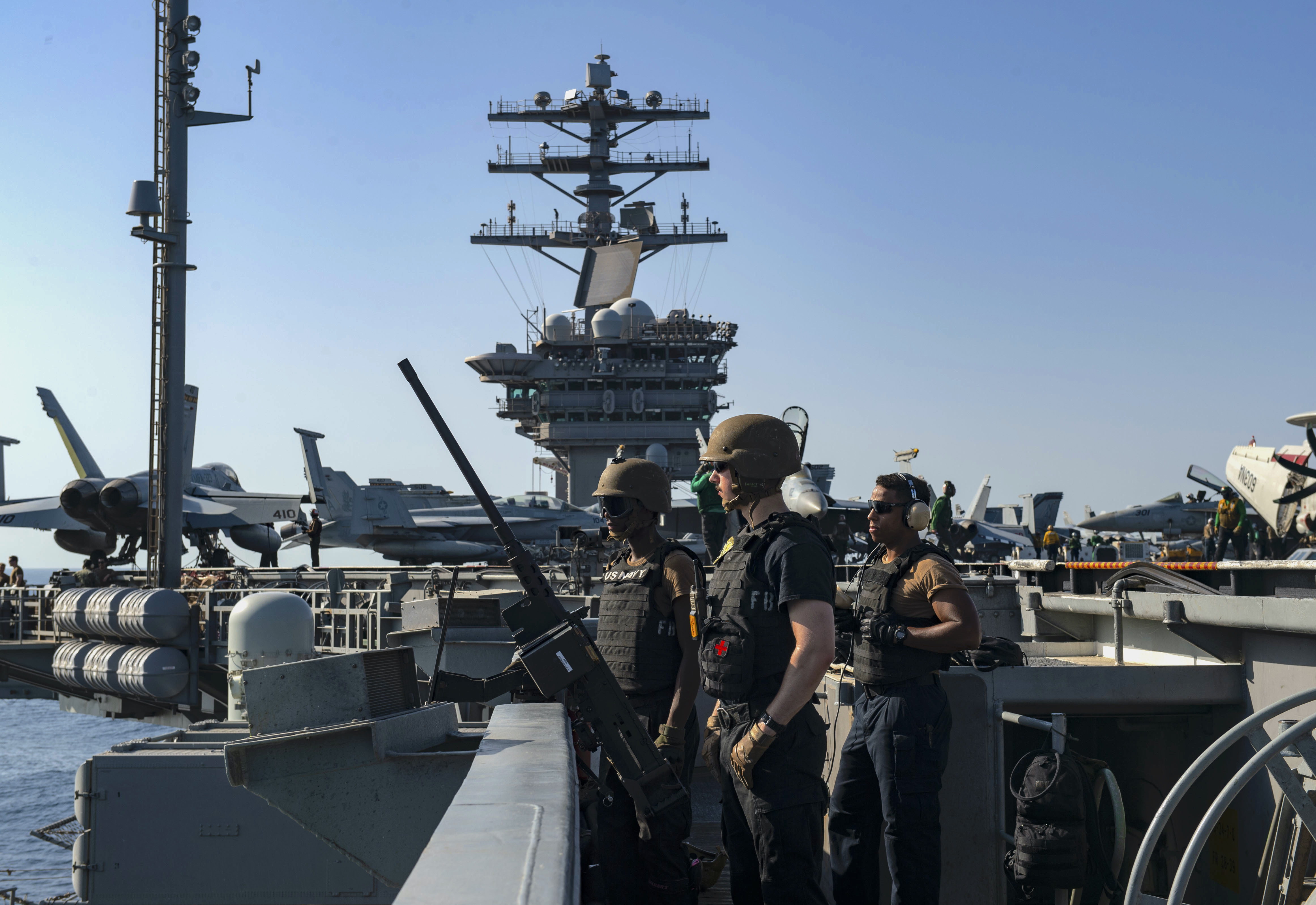 Sailors man a .50-caliber machine gun on the flight deck of the aircraft carrier of USS Nimitz (CVN-68) during a Strait of Hormuz transit on Sept. 18, 2020. US Navy Photo 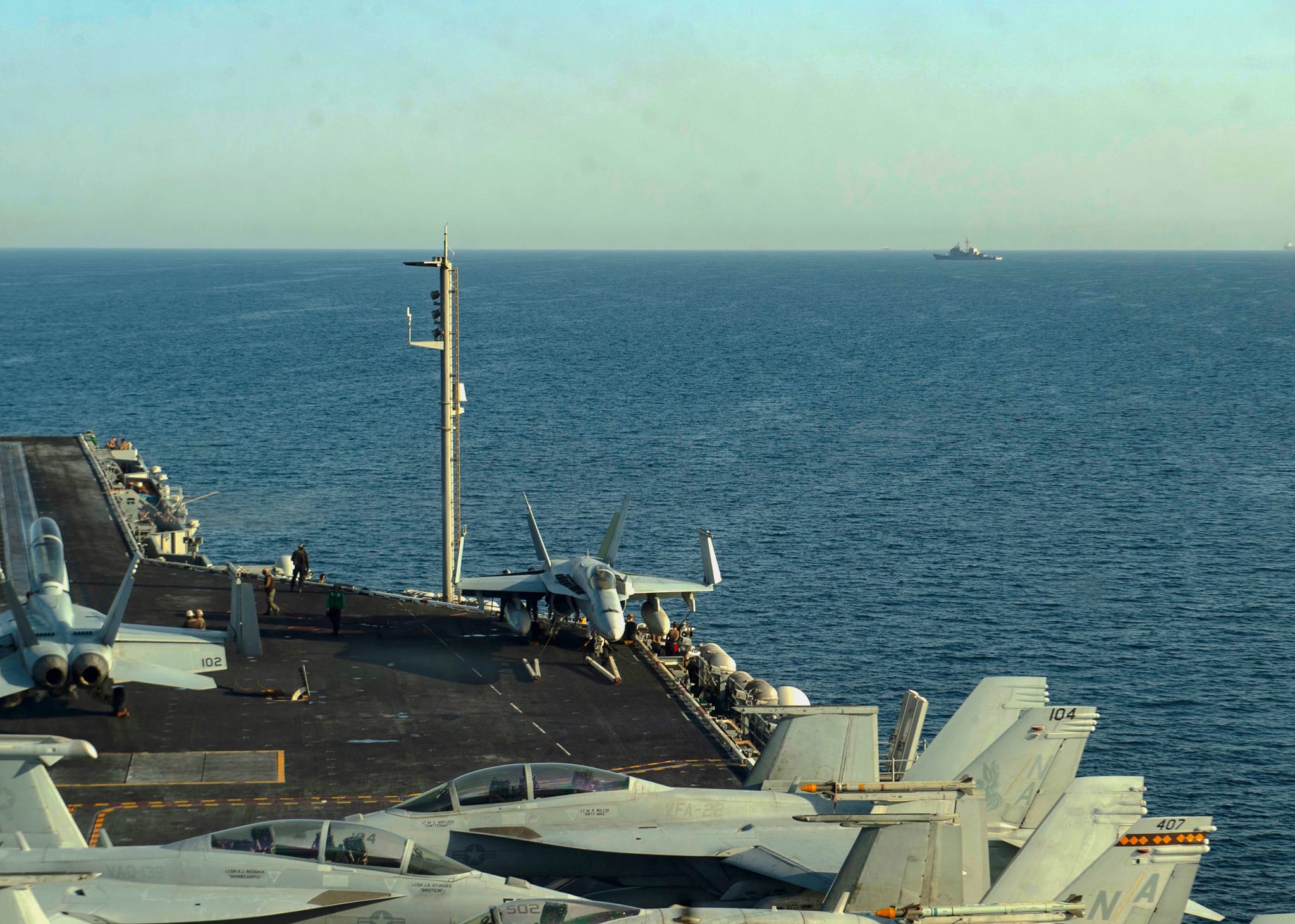 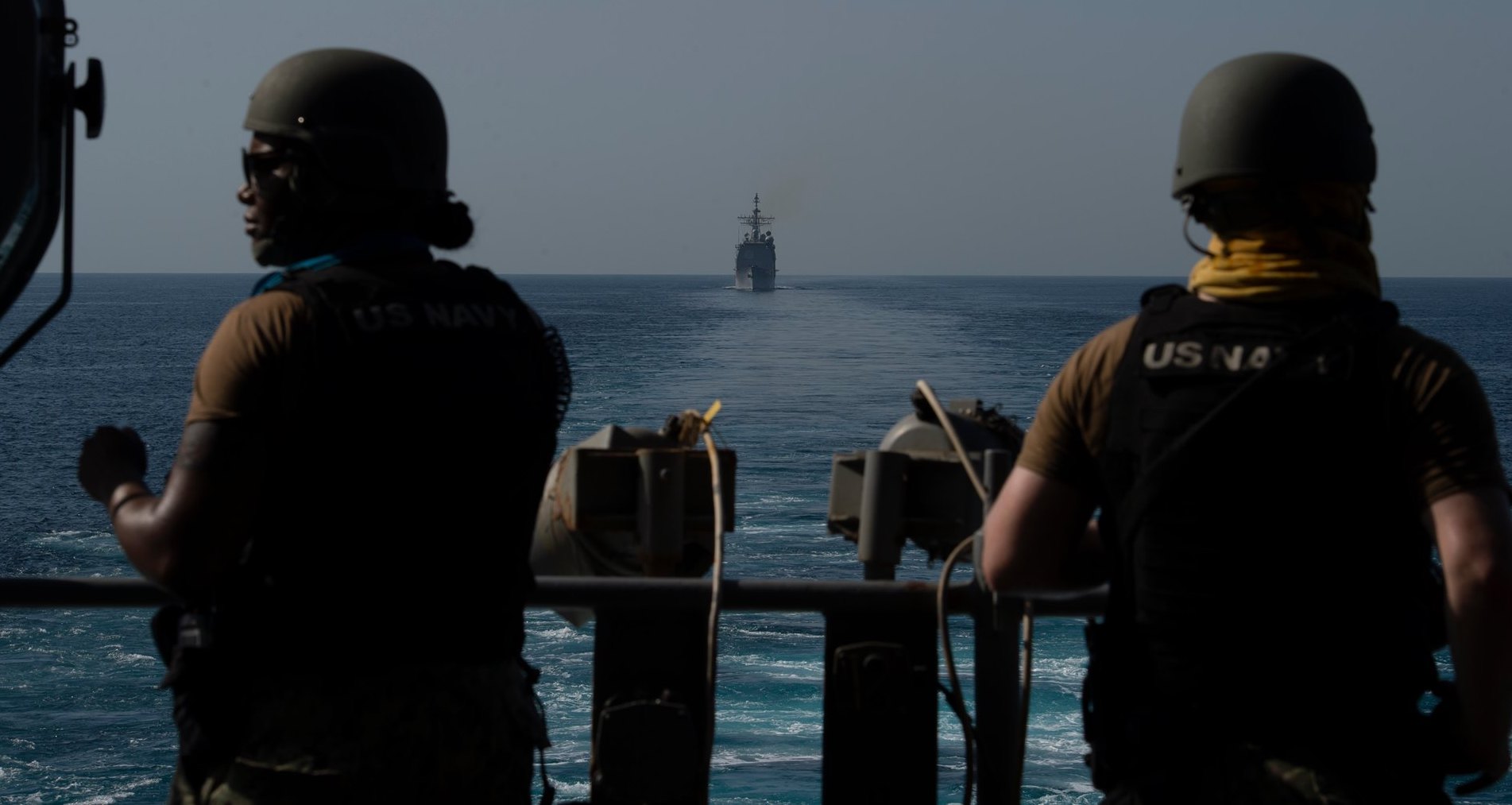 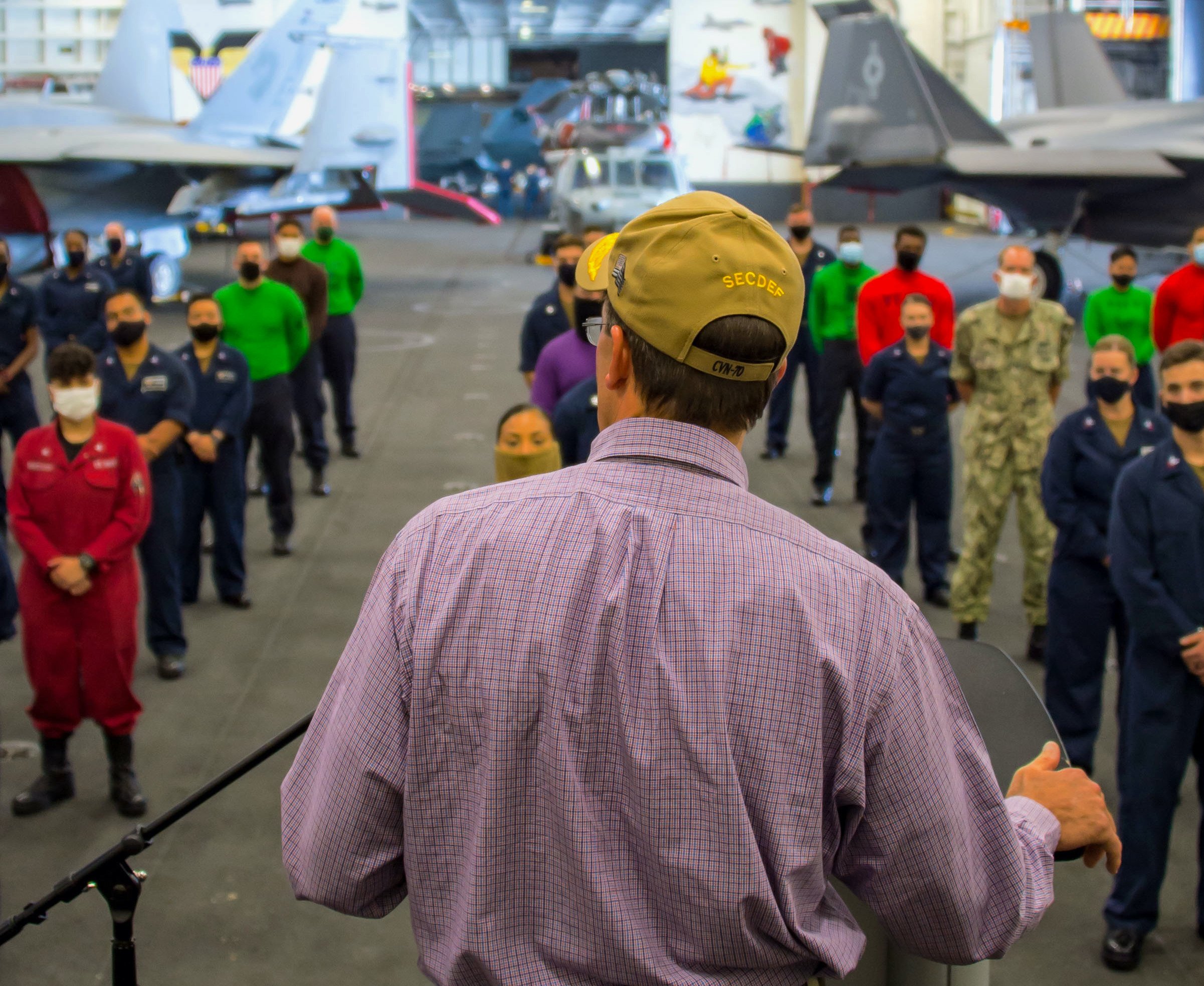 Secretary of Defense Mark Esper conducts an all-hands call with Sailors assigned to Nimitz-class aircraft carrier USS Carl Vinson (CVN-70) in the hangar bay of the ship on Sept. 17, 2020. US Navy Photo

USS Carl Vinson (CVN-70) is now back in San Diego after hosting Defense Secretary Mark Esper on Sept. 17 and having completed several important certifications in the Southern California Operating Areas, USNI News reported from the ship.

According to the Navy, “USS Carl Vinson successfully completed several certifications, including flight deck certification and carrier air traffic control center (CATCC) certification, Sept. 17, after nearly a week of flight deck operations designed to ready the carrier for future operations. The underway also marked the first time that Carrier Air Wing (CVW) 2 and Vinson, both part of Carrier Strike Group (CSG) 1, fully integrated and operated together since the addition of the F-35C Lightning II.”

Prior to operations with the air wing, Vinson completed a 17-month maintenance availability to receive upgrades to field the F-35C Lightning II and CMV-22 Osprey. Upgrades included enhanced jet blast deflectors able to take the increased heat generated by the F-35C and the addition of the Autonomic Logistics Information System (ALIS), the new computer network that supports the unique maintenance and tactical operations functions of the advanced aircraft.” 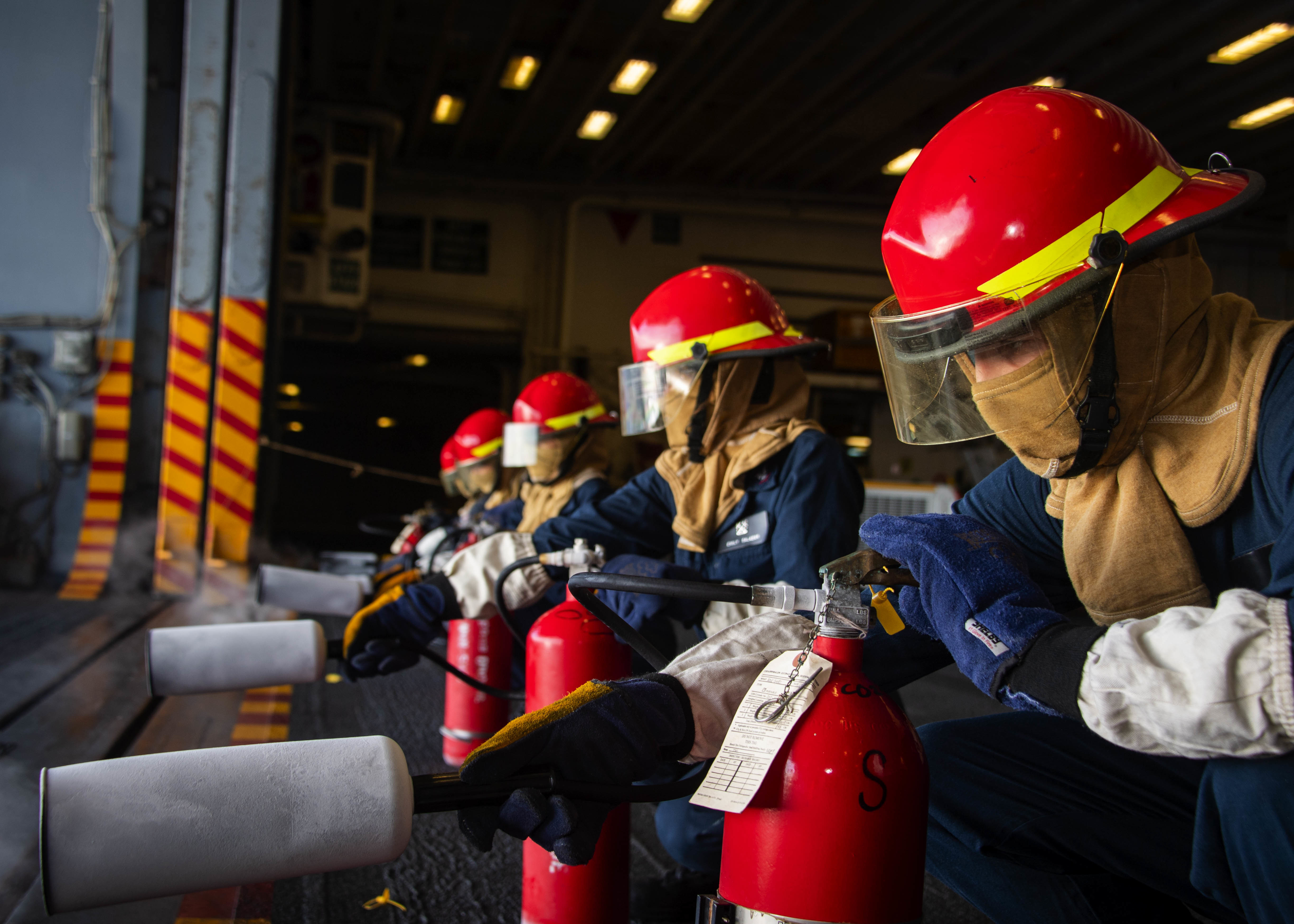 USS Essex (LHD-2) has returned home from its participation in the Rim of the Pacific Exercise (RIMPAC 2020) in Hawaii. 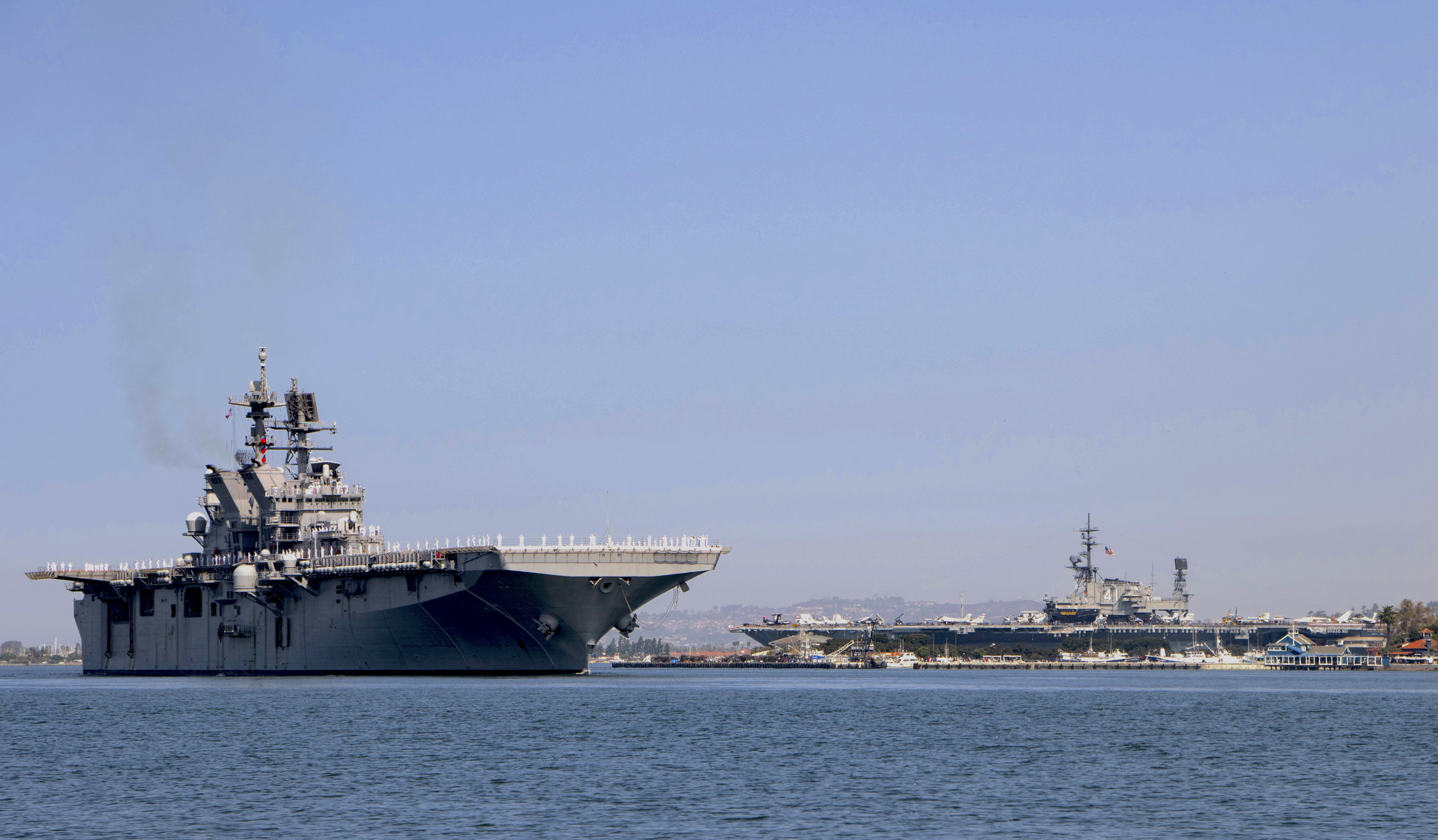 USS Tripoli (LHA-7) passes the USS Midway Museum as it arrives at its new homeport at Naval Base San Diego, Calif., on Sept. 18, 2020. US Navy Photo

USS Tripoli (LHA-7) arrived at its new homeport at Naval Base San Diego, Calif., for the first time on Friday. Because of the coronavirus pandemic, the Navy commissioned the ship in a small ceremony in July. Following the commissioning, Tripoli has sailed around South America, through the Strait of Magellan at the end of August, and up to California to reach its homeport. The big-deck amphibious warship can field both the Marine F-35B Lightning II Joint Strike Fighter and the MV-22B Osprey. Ingalls Shipbuilding, which constructs the America-class amphibious ships, delivered Tripoli to the service in February.

In a small ceremony on Friday, Tripoli held a change of command during which Capt. Joel Lang relieved Capt. Kevin Meyers as commanding officer. 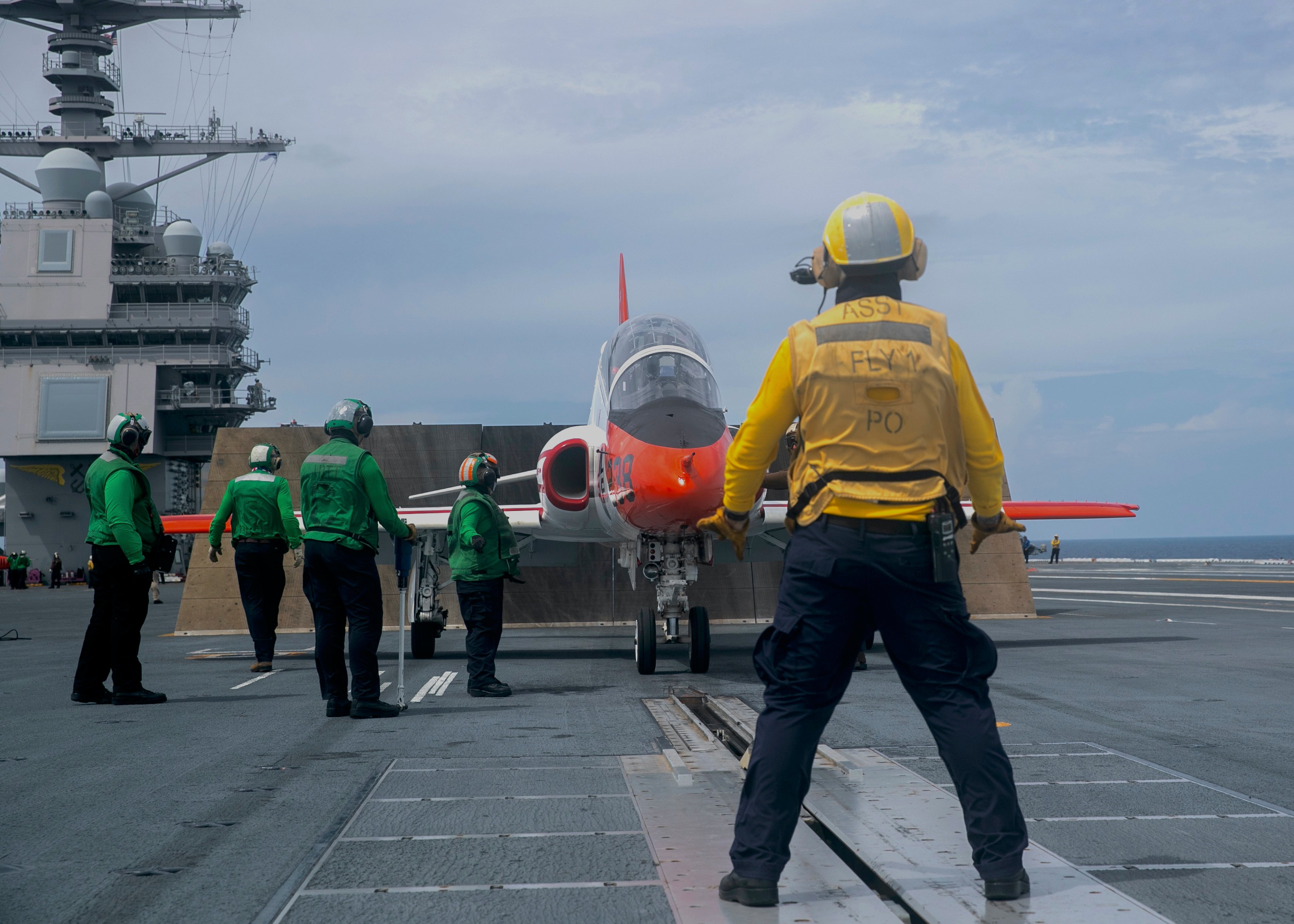 A T-45C Goshawk, attached to Training Air Wing 2, prepares to launch from the flight deck of the aircraft carrier USS Gerald R. Ford (CVN-78) during flight operations on Sept. 13, 2020. US Navy Photo

USS Gerald R. Ford (CVN-78) is underway off the coast of Florida. The carrier is in the midst of an 18-month post-delivery test and trials (PDT&T) period ahead of planned shock trials and its first deployment.