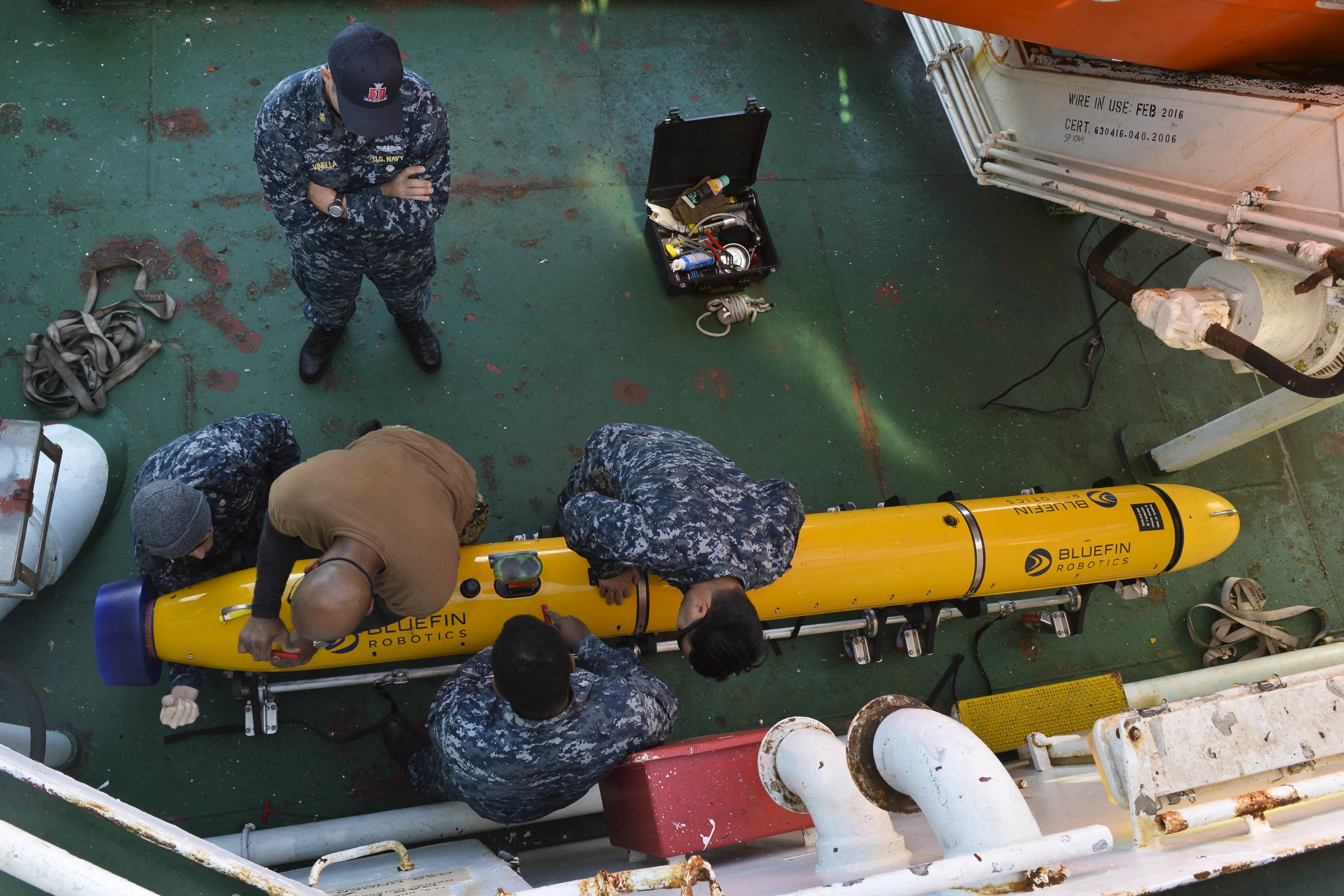 Development squadrons working with unmanned underwater and surface vehicles are moving out quickly to develop concepts of operations and human-machine interfaces, even as they’re still using prototypes ahead of the delivery of fleet USVs and UUVs, officials said this week.

Capt. Hank Adams, the commodore of Surface Development Squadron One (SURFDEVRON), is planning an upcoming weeks-long experiment with sailors in an unmanned operations center (UOC) ashore commanding and controlling an Overlord USV that the Navy hasn’t even taken ownership of from the Pentagon, in a bid to get a head start on figuring out what the command and control process looks like and what the supervisory control system must allow sailors to do.

And Cmdr. Rob Patchin, commanding officer of Unmanned Undersea Vehicles Squadron One (UUVRON-1), is pushing the limits of his test vehicles to send the program office a list of vehicle behaviors that his operators need their UUVs to have that the commercial prototypes today don’t have.

The two spoke during a panel at the Association for Unmanned Vehicle Systems International (AUVSI) annual defense conference on Tuesday, and made clear that they want to have the fleet trained and ready to start using UUVs and USVs when industry is ready to deliver them.

Adams previously told USNI News that the first iteration of concepts of operations for the medium and large USVs were due to Naval Surface Force Pacific by November – pushed back from an original September date due to COVID-19 challenges – and he said on Tuesday that he was already planning the first UOC operation to test out the command and control ideas in those CONOPS and the supervisory control system that industry had built to monitor and control the vehicle.

Sea Hunter, an entirely new class of unmanned sea surface vehicle developed in partnership between the Office of Naval Research (ONR) and the Defense Advanced Research Projects Agency (DARPA), completed an autonomous sail from San Diego to Hawaii and back—the first ship ever to do so autonomously. US Navy photo.

Using the Overlord USV still owned by the Pentagon’s Strategic Capabilities Office, his team will establish a 24-hour watch from what is “the first – I think it’s safe to say the first – instantiation of a fleet-manned unmanned operations center ashore, UOC, ashore. It’s going to be here in San Diego. So I’m going to have fleet operators, [surface warfare]-qualified junior officers who have got training in COLREGs and ship-handling and things like that, and senior enlisted personnel in relevant rates, are going to stand up this watch, and they’re going to be sitting next to the technology developers that write the code for the supervisory control system. And for the duration of that transit, which will be some number of weeks, I’m going to have my guys in that UOC ashore,” Adams said in the panel.
“We designed a job qualification requirement to get them qualified, because we have to establish some sort of training standards to go off of. I signed out a set of standing orders that governs their conduct of the watch, that’s new. So we’ll be getting feedback on what we think command and control looks like from a UOC ashore. We’re going to be giving direct feedback to the tech developers on how to improve the human systems integration piece for the supervisory control system. We’re going to begin looking at what is the proper information display that should be part of a UOC ashore, what’s the proper manning, did we get the training right. And that’s just one example of many efforts that are going to be going on here towards the end of [Fiscal Year] ‘20 and into FY ‘21 to leverage the opportunities that we can get to advance the unmanned surface project.”

Patchin said that, on the undersea side, the UUVRON plans to field the Orca Extra Large UUV in 2022 and the Razorback medium UUV and Snakehead Large Diameter UUV in 2023. The squadron is training with two test vehicles – named LTV 38 and 48 – to simulate the LDUUV, and has been working with an XLUUV prototype and two Razorbacks that have already delivered.

His team, made up of sailors with submarine weapons and navigation experience, have been “operating those on a regular basis here (in Washington State) as well as deploying forward with Razorback systems into the operational environment.”

As an example, Patchin said the squadron took LTV-38 out for operations at sea, “we do some operations on it, and we recognize that we’re doing things it wasn’t designed to do that are introducing errors to the navigation system, that we’re then feeding back to the program office” to address in the production vehicles. Patchin said the errors had to do with the vehicle being stopped at anchor versus constantly moving in the waterspace, and the operators are finding they want the vehicle to behave in a way that the prototype builders hadn’t considered.

Both SURFDEVRON and UUVRON-1 are taking a crack at CONOPS for specific missions, even without the actual USVs and UUVs to work with yet. Adams said SURFDEVRON is focused on surface strike for the large USV and intelligence, surveillance and reconnaissance (ISR) for the medium USV, as well as how to command and control both from at sea or ashore. Patchin said he’s focused on mining for the XLUUV – “we’re going to figure out how to go blow stuff up with the extra large” – and bottom survey imaging on the Razorback medium USV, though he noted that Undersea Warfighting Development Command is taking the lead on actually writing the CONOPS. He added that UUVRON-1 already has ideas for what else it would like to do with Razorback, including carrying payloads and conducting above-water imaging, but he said the UUV as it stands today will be limited to ocean floor imaging. Command and control is less of an issue for UUVRON-1 because, with limited connectivity from submarines to UUVs and high latency in the communications that are made, the relationship between the operator and the UUV will be much more hands-off than the relationship between operators and USVs.

Both Adams and Patchin said they’re working on understanding how to take submariners and surface warfare sailors and get them trained to use unmanned vessels, both from a technical standpoint but also a tactical one.

In response to a question by USNI News, Adams said “I don’t think we’re going to have any trouble culturally. Junior officers and young sailors, it’s just another screen, quite frankly, that’s my sense. So I’m very optimistic” that unmanned will be embraced. “Making sure we help provide feedback to get the human systems integration piece right, I think, will be important,” but he said his sailors were enthusiastic about embracing unmanned platforms into the surface fleet.

“I think from a technical perspective we absolutely have to have a training and education process that prepares people to be able to employ these systems, to conduct the maintenance, to understand the cascading effects when thing start going wrong – and that’s all just part of the process of designing the manpower side of this project correctly,” Adams added, noting that he has a staff member working closely with the program office to design manpower requirements for the LUSV and MUSV.

There’s still more to be done in refining what unmanned systems training and certification looks like and understanding what knowledge points are required for each watch position, which is something the upcoming UOC demonstration will help with.

Adams also said the community would have to define a Navy enlisted classification (NEC) code for sailors and additional qualification designation (ADQ) for officers to help keep track of those who had been trained to operate USVs, “so we can begin reinvesting in ourselves down the road. So maybe you start off as a junior officer or a junior enlisted and you do a tour with USV Division 1 as an operator; then maybe later on in your career you come back to the [immediate superior in command] level to provide that supervision and support” to the next generation of USV operators at the division.

Patchin said the UUV community was having similar conversations about training and retention. The UUVRON is bringing in sailors with submarine technical ratings now, but Patchin said he’s working with the chain of command and the submarine force to get a UUV NEC developed.

“We have to be able to set up deliberate points in our manpower plan where we’re prioritizing bringing that talent back into, whether it’s the ISIC inspection team, or into a training environment, to make sure that when we make these investments in training the team that we’re reaping the rewards for more than just a couple of years,” he said.

In terms of cultural challenges of incorporating unmanned, Patchin said submariners may have a harder time than surface warfare sailors.

“Culturally, I think the biggest barrier we’re going to have is the understanding that, in my day job as a submarine officer, I was trained” to operate a platform that promises 99.999999999-percent reliability, he said, which creates a certain mindset among submariners.

“We can’t afford that in a UUV, so we’re going to be operating a system that has a reliability short of a nuclear power plant that goes to sea and goes to war. So understanding and being able to culturally move between those two worlds poses a cultural challenge to us, if you will, that we have a certain expectation of what good is that may be different when we look at a UUV in the medium form factor that’s affordable.”