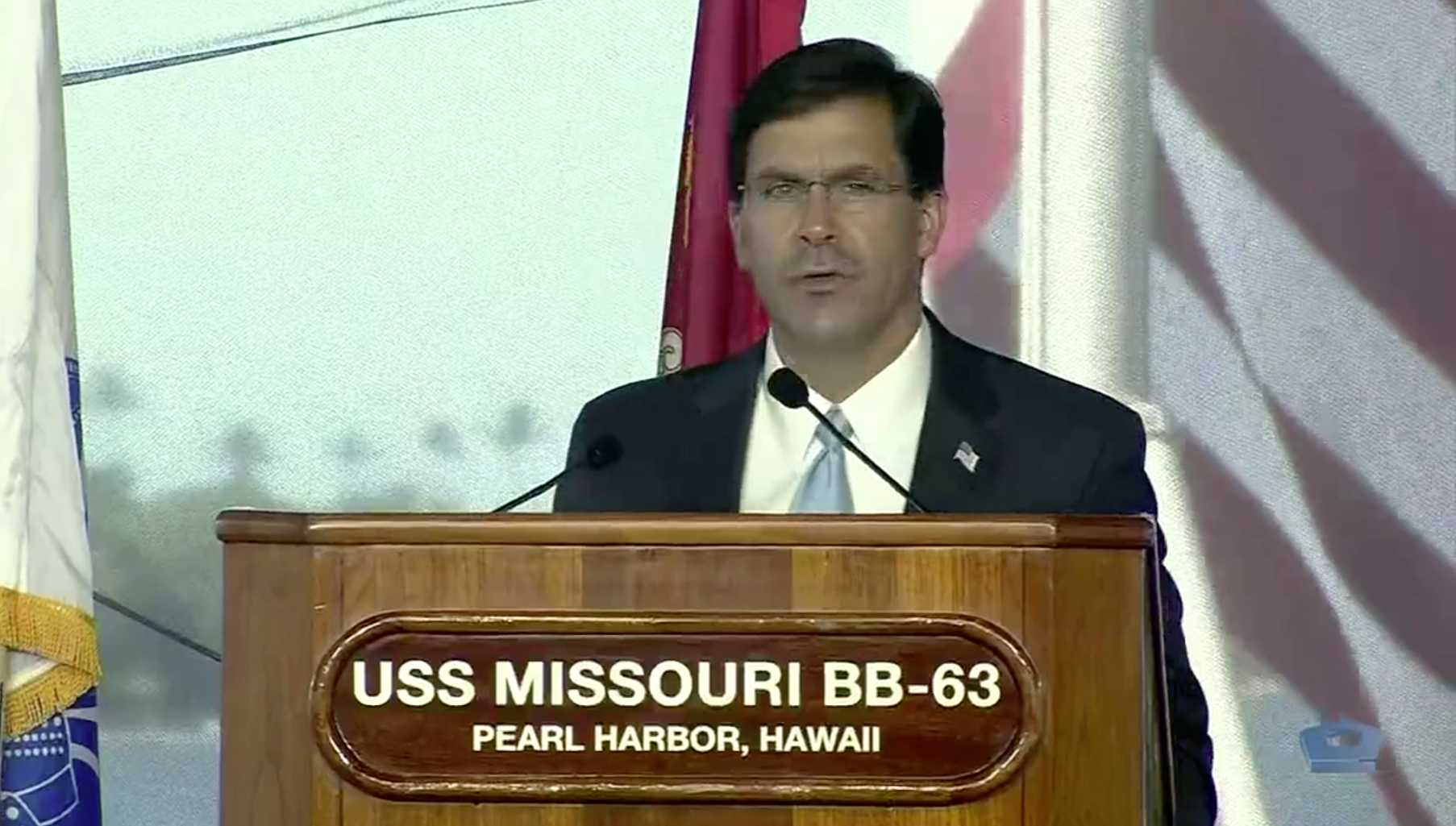 The U.S. “will not back down; we will not yield” in maintaining the international rule of law, Defense Secretary Mark Esper said on Wednesday at a ceremony commemorating the 75th anniversary of the formal ending of World War II.

Speaking aboard USS Missouri (BB-63) Wednesday in Hawaii, Esper quoted President Ronald Reagan that the United States’ intention is to maintain “peace through strength” and that the nation is building, “on an alliance structure to match that commitment.”

No longer can the nation, its allies and partners, “take it [peace] for granted” and that the “rules-based order” that lifted billions out of poverty will remain unchallenged.

In introducing Esper, Adm. Philip Davidson, head of the Indo-Pacific Command, said an “emboldened” China is raising a new set of challenges today.

Without naming China, Esper said, “we must remain ready to defend” an order based on established law and decades of practice.

He said that the allied victory in Europe and the Pacific, “fundamentally altered the world order. …It was America’s time to lead.”

For the Americans coming out of that war, the years of conflict “prepared them well for the decades-long struggle with the Soviet Union” that led to its collapse. In its wake concepts of liberty and the value of open markets took hold in Europe, Asia and in the Pacific. It was “not a strategy of might makes right,” a reference to China now.

In a videotaped segment, Gen. Mark Milley, chairman of the Joint Chiefs of Staff, said, “we must never forget the sacrifices [that were made] in a great power war.” He noted his father’s service in the war as a Navy Corpsman assigned to the 4th Marine Division and his mother’s service at a Navy hospital in Seattle during the war. They “fought for a better peace.”

Esper’s remarks and those of Davidson and Milley were preceded by a “Legacy of Peace Aerial Parade” of World War II aircraft that had been ferried to Honolulu aboard USS Essex LHD-2 for the ceremony. Seventy-five years before in Tokyo Bay, more than 900 fighters and bombers flew over Missouri following the signing of the surrender agreement. 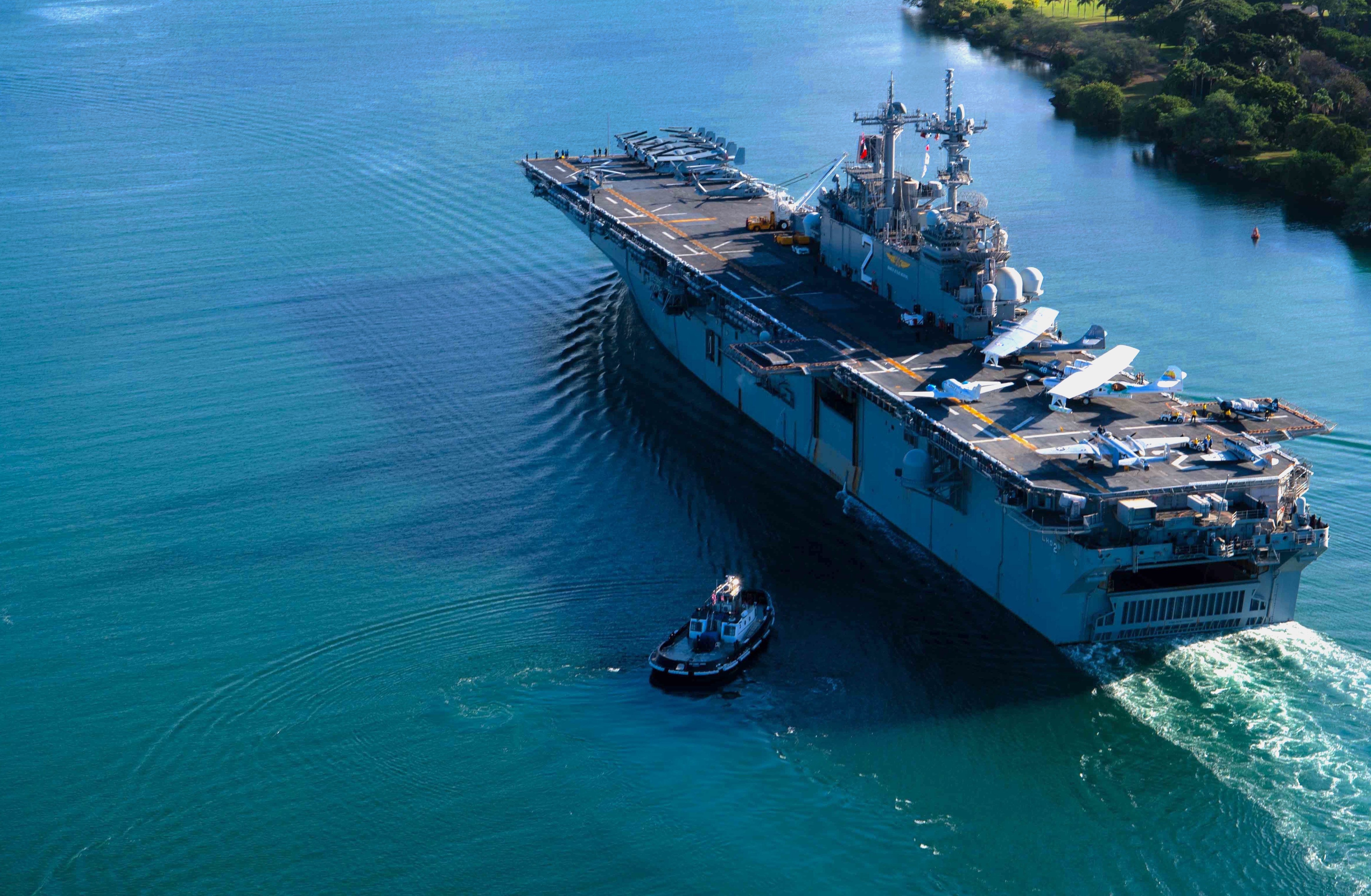 Parade emcee Dave Price said all of the aircraft “will be tipping their wings” in tribute to celebrate the end of WWII. Calling the anniversary ceremony one that “celebrates GI Joe and Rosie the Riveter,” he added, “our fate and much of the world hung in the balance” during the war where 12 million Americans answered the call to active military service.

As all the speakers aboard Missouri, now a memorial museum, close-by the Pearl Harbor Memorial, said the ceremony on the battleship’s fantail memorialized the more than 400,000 “who did not come home” at war’s end.

In a video presentation that started at 9:02 a.m. Sept. 2, the exact time of the 1945 surrender ceremony, Art Rinetti, a Navy retiree, said, “people were happy [on VJ Day], an end to a lot of problems and [to begin] a life for themselves.”

The COVID-19 pandemic forced a scaling back of events surrounding the anniversary in Hawaii. It also caused a number of World War II veterans, like former Sen. Robert Dole, to forego their plans to attend. Dole contributed videotaped remarks for the event.

Also as part of the ceremony, USS Michael Murphy (DDG-112) passed in review of the battleship. In the harbor were also vessels from Singapore, France, the Philippines and Australia.