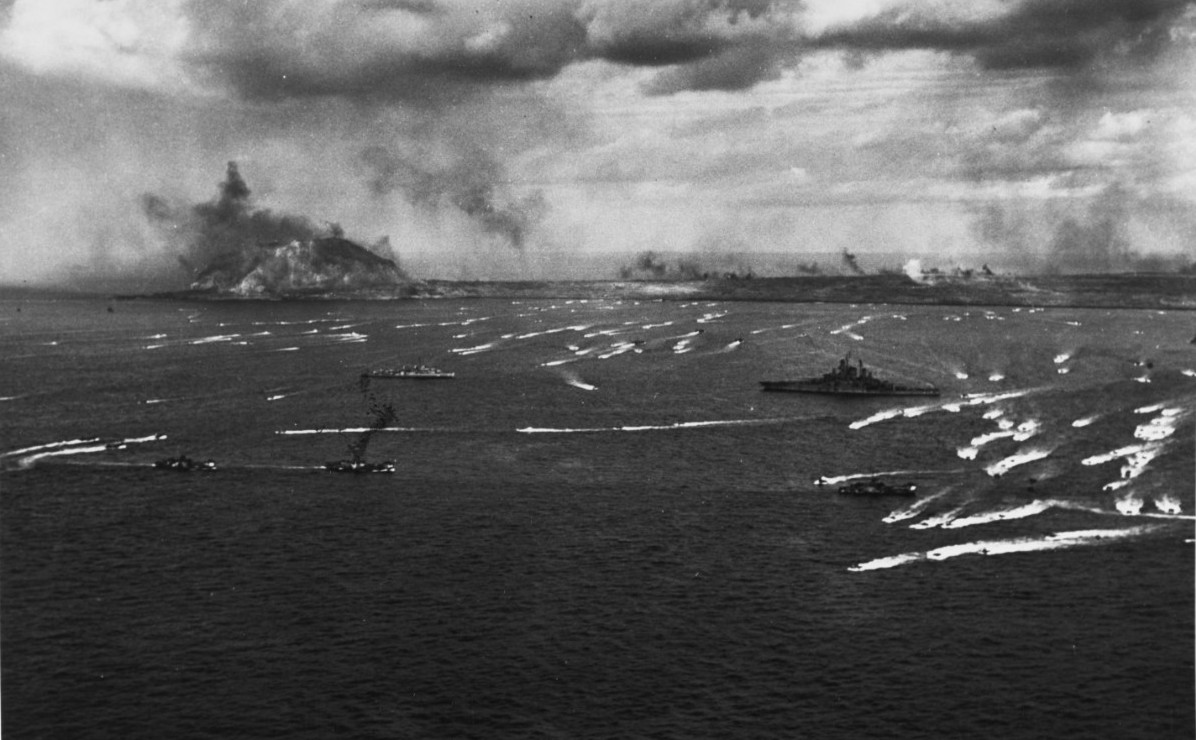 LVTs retracting from the Iwo Jima beaches after landing the initial waves of Marines, during the morning of Feb. 19, 1945. USS Tennessee (BB-43) is in the right-center. Navy Photo

Iwo Jima was “what hell on earth was like,” the chairman of the Joint Chiefs of Staff said, describing what his father, Alexander Milley, experienced when he landed on the eight-square-mile island 75 years ago.

The fight was “an inch by inch, yard by yard” struggle that claimed 7,000 American lives, primarily Marines, and left 34,000 wounded, Army Gen. Mark Milley, said Wednesday at the World War II Memorial in Washington, D.C. About 20,000 Japanese died in the 36-day fight that allowed the Americans to take “a major stepping stone to get to Okinawa.”

Iwo Jima’s value lay in its location. The craggy island, dominated by Mount Suribachi, is about halfway between Saipan and Tokyo and would be extremely valuable for B-29 bombing operations on the Japanese home islands. Taking the island would also remove a major land base where Japanese fighter planes could be staged to hold off air attacks.

Early estimates were that the three Marine divisions would suffer about 33 percent casualties, Edward Nevgloski, director of the Marine Corps History Division, said during a Facebook Live question-and-answer session at the National Museum of the Marine Corps in Quantico.

“Eighty percent [of the Medal of Honor recipients in the Marine Corps during World War II] came out of that battle. The majority are going to be wounded at least once,” he said.

Twenty-two Marines and four Navy corpsmen were awarded the Medal of Honor for their actions at Iwo Jima.

“If you were at Iwo Jima, you were quite amazing,” Andre Sobocinski, a historian at the Navy’s Bureau of Medicine and surgery, said in the Facebook Live event of the approximately 80,000 Americans who were engaged in the battle.

Sitting in front of the first flag raised on Mount Suribachi, he added that one of the legacies that carry through today was the demonstration of “American grit and resilience” against such determined defenders.

For 66 days before the invasion Feb. 19, 1945, Army Air Forces bombers and 400 Navy warships pounded the island that had two working airfields and a third under construction, Milley said at the Washington ceremony. The landing force was told there “were no Japanese left alive,” but as soon as the first Marines reached the “trigger line” on the beaches, the defenders opened up.

Nevgloski said the Japanese long before had evacuated all civilians from the island. For 28 years, he added, they had been digging 11 miles of tunnels, expanding cave entrances, laying down airfields and building up forces to keep invaders at bay. To this day, not all these tunnels have been examined, nor are the exact number of Japanese dead known.

For the Marines, “you had to worry about getting shot 360. …We knew this going in, [but] we didn’t know how extensive this [layered defense] was.”

Sobocinski said from the start casualties were taken to aid stations, often less than a mile from where fighting remained intense. That quick movement of the wounded to aid stations and then a few days later to forward field hospitals provided treatment within the “golden hour” necessary to keep them alive, Nevgloski added.

Iwo Jima proved to be a “test to the extent our country’s will go to meet the objective” of achieving the unconditional surrender of the Japanese, Nevgloski said. 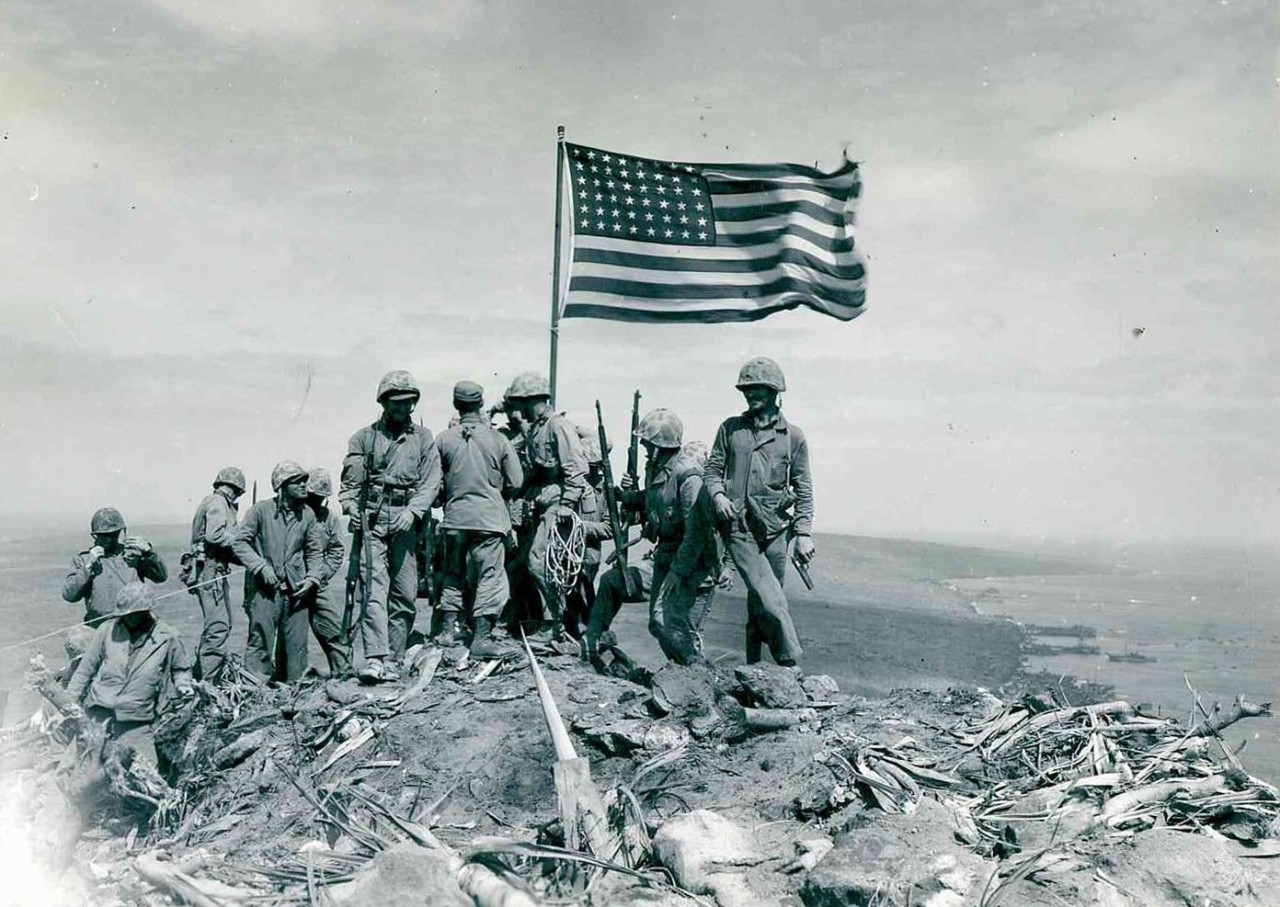 Marines risk sniper fire atop Mount Suribachi as they gather to the great attraction of the day—5th Division Marines raise the American flag on Feb. 23, 2020. US Marine Photo

Iwo Jima does not stand alone as a battle, the speakers at both events said.

At the Washington ceremony, Milley noted that when his father was under fire on Saipan months earlier, his brother at the same time was part of the Allied invasion force at Normandy.

The effort in both theaters was “an incredible tale of valor” of the American armed forces in World War II, he said.

“The Japanese and the Germans were formidable enemies” who were intent on imposing their view of order on the nations they conquered or cowed into submission, Nevgloski said.

Milley said Allied leaders realized in 1945 that they can “never sacrifice another 150 million people,” the totals killed in World Wars I and II; and to prevent that, they successfully established an order of law that accepted competition among “great powers,” like a “rising China” or an “aggressive Russia,” without resorting to the all-out combat of the 20th century.

With veterans from the European and Pacific theaters by him, Milley said the American military is “committed to preserving the Constitution” and peace.

The National Museum of the Marine Corps in Quantico is hosting a number of events this weekend marking the 75th anniversary of the invasion of Iwo Jima.