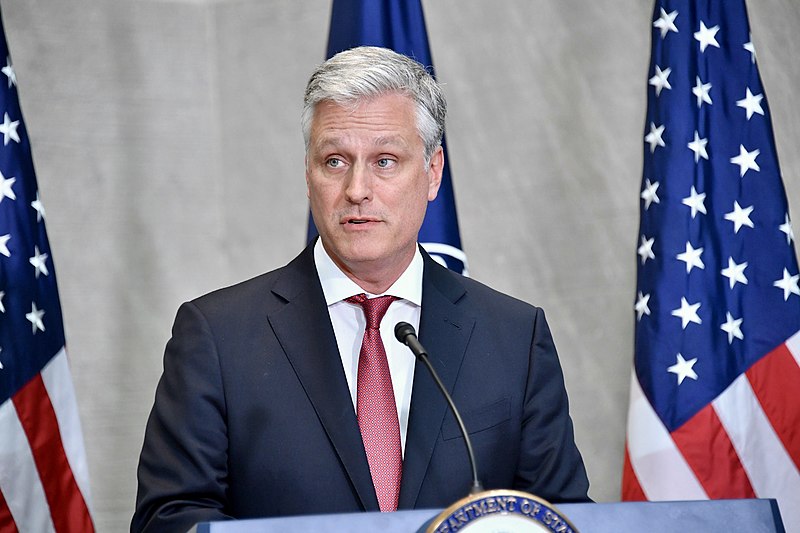 The United States “is not going to back down” in asserting its rights to freedom of navigation, freedom of flight and use of space in the face of China’s “increasing assertiveness and aggressiveness,” National Security Advisor Robert O’Brien said on Friday at an online event at The Atlantic Council.

The U.S. rejects China’s attempts to annex a vast swath of the Pacific Ocean, he said. This week, China first conducted military exercises and test-fired anti-ship missiles in an effort to ward off U.S. operations in the South China Sea, and then pushed back against U.S. Air Force U-2 overflights in the area. That attempt to keep others out of the South China Sea “is typical of China’s behavior.”

O’Brien said Washington is following the Reagan administration’s model of “peace through strength” in dealing with China and Russia, as spelled out in the National Security and National Defense Strategies.

“They just don’t follow the rules,” when it comes to accepting an international tribunal’s dismissal of China’s territorial claims. He said the same applied to its theft of American intellectual property and industrial information that Beijing had pledged to end during the administration of President Barack Obama. At the same time, its “bullying of the Republic of Taiwan” has intensified, as has its aggression against India.

China, for its part, has labeled U.S. military operations in the Western Pacific as destabilizing.

O’Brien added China’s recent abusing of Western capital markets to finance the militarization of artificial islands and its Belt and Road initiative has led to a new round of economic sanctions.

Washington levied the sanctions against two dozen Chinese firms, some state-owned, this week over their involvement in the militarization of the manmade islands in the South China Sea. The new sanctions came less than two weeks after the United States also sanctioned leaders of the Chinese Communist Party and other individuals for Beijing’s crackdown on pro-democracy protests in Hong Kong.

“They work in every domain” to ensure control domestically and exercise influence and power over China’s neighbors in the Indo-Pacific.

O’Brien said several times that the United States’ strength in the Indo-Pacific and in Europe rests on its allies and partners. They are not “rented,” as China attempts to do to achieve its goals. By contrast, “the Quad is one of the most exciting diplomatic initiatives” in recent years. He was referring specifically to the closer security, diplomatic and economic relationships developing between the United States, Australia, Japan and India, all democracies that can push back against a rising China.

The United States recognizes the Indo-Pacific “is the engine of the world economy going forward.” In the region, the American “private sector has invested over $1 trillion, as much as Japan and China combined.” He said that a recent Association of South East Asian Nations conference he reassured attendees that Washington remains engaged with them and their futures.

“Most importantly, we’re doing it through investment and trade.”

When asked what the most notable achievement of President Donald Trump’s administration was, he said, “standing up to China.” He said that included the American response to the COVID-19 pandemic, its trade policies, theft of intellectual property and manipulation of capital markets.

China “is trying to re-shape the global commons” and “change the rules of the road” in what is acceptable in international behavior.

O’Brien said despite the travails of 2020 — from the pandemic to escalating tensions between Greece and Turkey and “we haven’t talked about Russia’s” continuing threats — “I’m optimistic about the future.” He cited steps toward peace in Afghanistan and the establishment of diplomatic relations between the United Arab Emirates and Israel as encouraging signs of what might lay ahead.

O’Brien said the United States is not stepping back from its role as a global leader. Looking at America’s neighbors, with the exceptions of Cuba, Nicaragua and Venezuela, “we have a hemisphere of democracies.”