A scaled-down Rim of the Pacific Exercise began today off Hawaii with a third of the expected countries and a fifth of the expected personnel participating due to COVID-19-related restrictions.

But the exercise commander, U.S. 3rd Fleet Commander Vice Adm. Scott Conn, said in a pre-recorded RIMPAC 2020 kickoff message the exercise would still meet its goal of building interoperability and trust among Pacific militaries participating in the at-sea-only event.

“Originally, RIMPAC 2020 had planned to include up to 30 countries, more than 50 ships and submarines, more than 200 aircraft, and 25,000 personnel – 4,000 of those ashore for operations and support functions. That would have been the largest RIMPAC to date. We have scaled that down to 10 nations, 22 ships, one submarine, and approximately 5,300 personnel, all at sea,” Conn said in the video.
“The flags you see behind me represent a formidable team of 10 navies from Australia, Brunei, Canada, France, Japan, New Zealand, Republic of Korea, Republic of the Philippines, Singapore, and the United States, all of whom will spend the next two weeks training through a series of events designed to improve our ability to operate together. This year we will focus solely on warfighting in the maritime domain, to include anti-surface and anti-submarine warfare, maritime interdiction operations, and robust live-fire events.”

In 2018’s event, 25 countries sent 45 ships, five submarines and about 25,000 personnel to Hawaii and Southern California for an event that spanned from late June to early August and included notable events such as the first Harpoon missile shot from a Los Angeles-class attack submarine in more than 20 years; an innovation fair that featured new tech of all kinds that participating navies were testing out; and two sinking exercises (SINKEXs) of decommissioned U.S. warships, including one that ended much earlier than planned after a successful shot by the Singapore Navy.

This year’s event, the 27th iteration since RIMPAC began in 1971, will last two weeks. It will not include ashore events, including the harbor phase, where cultural exchange events and final planning meetings take place, or amphibious landings, where in 2018 an Australian amphibious ship and U.S. landing craft made a very effective pairing. Similarly, crews will remain on the ship they arrived on and will not be allowed to cross-deck, whereas in the past it was typical to see perhaps a dozen countries’ uniforms represented while waiting in line for dinner. 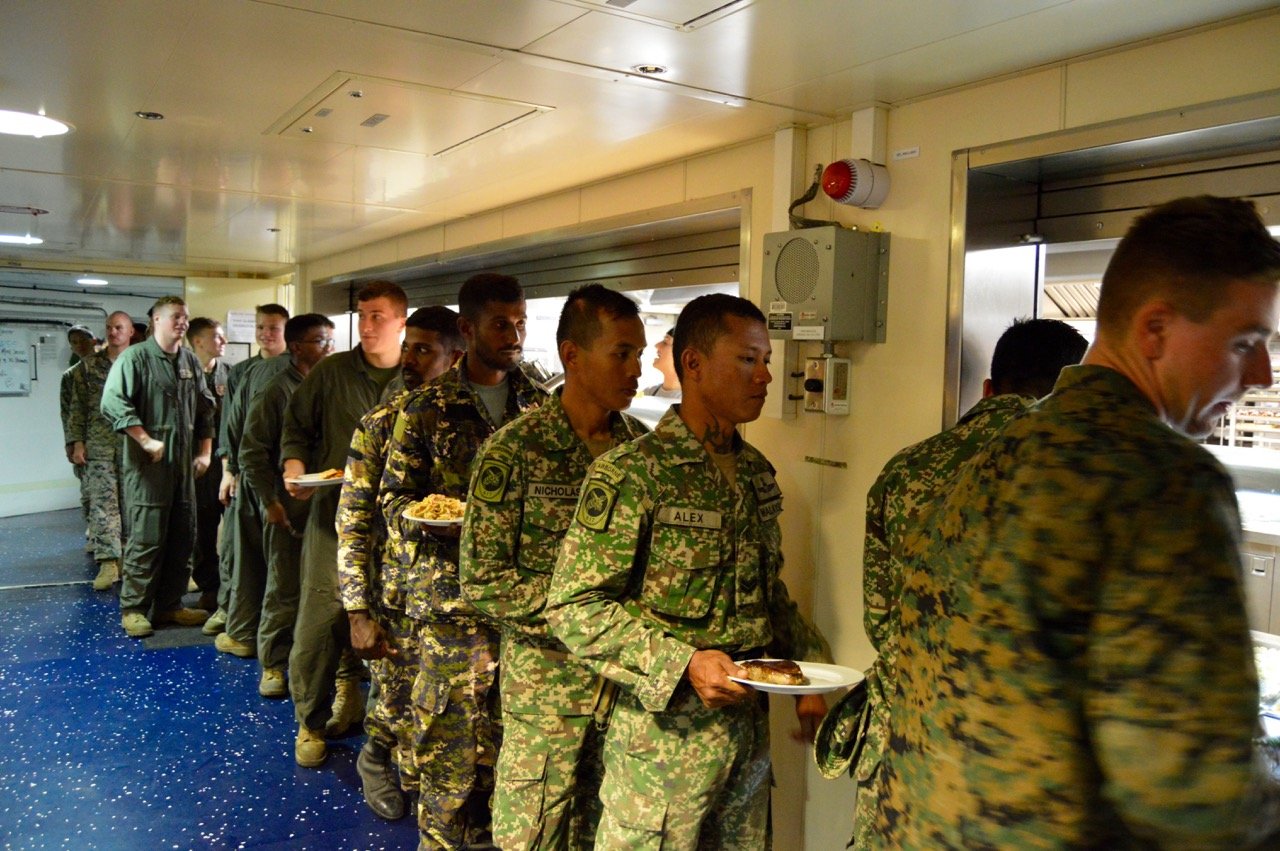 It will feature one SINKEX, with forces shooting at the ex-USS Durham, a decommissioned Charleston-class amphibious cargo ship. “That will give our participating units an opportunity to gain proficiency and confidence in their weapons and systems that can’t be duplicated in simulators,” Conn told reporters in written answers to media questions. There will be no experimentation or innovation this year due to the shortened timeline, and there will be no free-play phase at the end, where task force commanders are given problem sets for their multi-national groups to work through.

Still, Conn said it was important to bring as many navies together as possible in a time when maritime challenges in the Pacific range from fisheries management and law enforcement to territorial disputes with China that have the potential to spark a bigger conflict in the region.

“While we have the ability to surge ships and people, we cannot surge trust. In times of crisis – whether man-made or natural disasters – the time to establish interoperability and forge key relationships is not in the midst of crisis response. We want to have those personal relationships and trust already well-established. That is why we continue to conduct RIMPAC exercises every two years. That is why we made the calculated decision to proceed with RIMPAC 2020, to demonstrate to ourselves and the world that our navies have the resolve to come together in times of crisis.”

USNI News asked Conn what it meant to lose out on the face time with partner nations this year, even as China was courting many of the same smaller countries that participate in RIMPAC through financial investments in its Belt and Road initiative.

Without addressing China specifically, Conn wrote, “within the context of RIMPAC, the exercise life cycle is a two-year process. As RIMPAC ends, planning begins for the next. During that two-year period, several planning events take place where all invited nations send representatives to coordinate and develop the next iteration. Doing so gives the participants opportunities to engage with military representatives from across the globe, fostering communications, comradery, and trust.”

He wrote in response to another question that “RIMPACs bring like-minded navies together that are able to effectively work together during a time of crisis to ensure regional stability and security, RIMPAC 2020 will be no exception in that regard, even as an at-sea only exercise. However, executing in this fashion, unfortunately, means that there will be no physical interaction between exercise participants or between them and the people of Hawaii. Those interactions are a big part of RIMPAC in terms of building relationships. There would be a much greater disadvantage to all of us though, if we did not do RIMPAC in some form. The free flow of commerce and must be protected and we must be ready to respond to crisis, whether it be a common threat, or a natural disaster. RIMPAC will help us increase our ability to operate together and build trust.”

To keep participants safe during the exercise, all ashore activities were canceled, and the U.S. Navy’s ashore support staff was reduced from last year’s 600 people to less than 100. Those support personnel who flew to Hawaii conducted a 14-day quarantine and had to test negative for COVID-19 before joining the exercise, Conn said.

Additionally, he said the U.S. and some partner nations could support COVID-19 testing at sea if any participant developed symptoms, and he made clear that no samples would be brought ashore for testing. Several participating ships have medical facilities aboard, but if a medical emergency arose that surpassed that capability, the patient would be brought to a military hospital in Hawaii and not to a local civilian healthcare facility. Ships may pull into Joint Base Pearl Harbor-Hickam to take on fuel or supplies, but no personnel will leave the ships or have contact with anyone else on the pier.

“I can speak on everyone’s behalf in saying that we will certainly miss the interactions we typically have with the community during RIMPAC. However, we are doing everything in our power to ensure the health and safety of the citizens of Hawaii as well as our U.S. and partner nation sailors,” Conn said.

Participating ships this year are:

Republic of the Philippines