The relationship between Washington and Beijing has sunk to such a “very dangerous” level with no sign of tensions easing after the next U.S. presidential election, the prime minister of Singapore said Tuesday.

Lee Hsien Loong said his city-state nation and others in Asia are increasingly worried that America “treating China as an adversary” could lead to dangerous outcomes, he said speaking at an online forum of The Atlantic Council.

The first potential outcome would be a military collision between the two global giants. The second would be the U.S. deciding the Indo-Pacific is “a problem rather than an asset.”

Lee, recently re-elected to a new five-year term, hopes either President Donald Trump or likely Democratic candidate Joe Biden would work “to stabilize your relations with China.” At the same time, the administration – no matter who wins – needs “to try and develop a bipartisan consensus [in the Congress and with the public] that there’s stability in U.S. relations” with China and the Indo-Pacific.

Lee termed Washington-Beijing relations as “the most important bilateral relationship in the world,” though it is now marked “by deep distrust” that is more and more confrontational – from trade to diplomacy to military shows of force.

For countries like Singapore, with its 5.7 million people and a global financial hub in Asia, the swing in American policy between President Barack Obama’s pushing of the Trans-Pacific Partnership trading arrangement and “the quite different mood” the Trump administration has toward the region raises questions of reliability in a crisis.

“We want to depend on you” while also balancing economic and diplomatic relations with China, Lee said. Worrisome to a country like Singapore is the protracted and contentious negotiations with Japan and South Korea over basing and compensation.

Both are American treaty allies.

Last year, Singapore, regarded as a partner, and the United States extended an agreement granting American naval and air forces access to the city’s military facilities. The two nations’ maritime forces continue to exercise together in the South China Sea, a potential flashpoint between the United States and China over its extensive territorial claims.

“I don’t think you can set a deadline” on agreeing to a code of conduct among the nations in the Association of South East Asian Nations (ASEAN) that would settle these disputes, he said. But negotiations among the countries, which includes China, is preferable “rather than face-offs at sea” that can escalate.

Earlier this month, Secretary of State Mike Pompeo said the United States stood by an international arbitration panel’s 2016 decision rejecting Beijing’s claims on outcroppings in Philippine waters, raising the threat of military action to defend a treaty ally. State Department officials, picking up on that statement, accused China of “gangster tactics” in bullying nations like the Philippines, Malaysia, Indonesia, Vietnam and Brunei to get its way in control of coral reefs that it converts to manmade militarized islands. Increasingly during the pandemic, China used those bases to back up its claims to fishing rights and mineral and energy exploration. 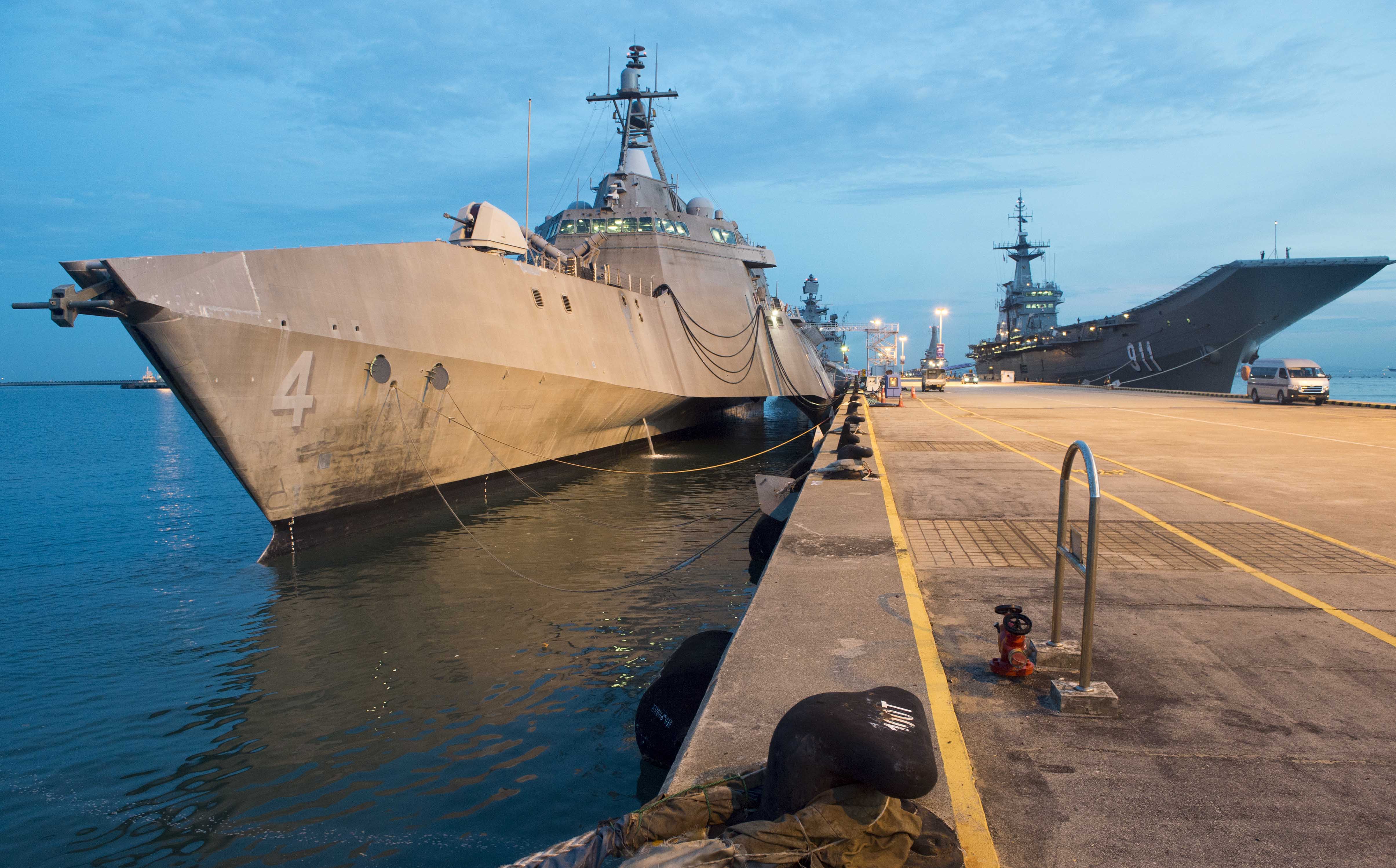 170513-N-PD309-057
CHANGI, Singapore (May 13, 2017) The littoral combat ship USS Coronado (LCS 4) moors in Changi, Singapore, in preparation for the International Maritime Defense Exhibition. Coronado is on a rotational deployment in U.S. 7th Fleet area of responsibility, patrolling the region’s littorals and working hull-to-hull with partner navies to provide 7th Fleet with the flexible capabilities it needs now and in the future. US Navy Photo

Across the Indo-Pacific, “issues [between Washington and Beijing] have been metastasizing,” Lee said.

As the leader of a small nation, he said, “we can see all the threats around us.” He said since gaining its independence from the Malaysian Federation in 1965 Singapore has succeeded through “hard work and paranoia” to maintain its independence.

As an example of trying to keep a balance in relations, Lee said his government “is watching what happens in Hong Kong with concern.” But he added that the situation where Hong Kong’s government did not adopt a national security law “could not continue indefinitely.”

As a result, China’s Standing Committee of the National People’s Congress imposed its version of the law on Hong Kong. “This triggered counter-responses in Britain and America,” Lee said, noting as an example how the U.S. demanded the Chinese close their consulate in Houston and Beijing shortly afterwards demand the U.S. close its consulate on the mainland.

When asked how he rated President Xi Jinping, Lee said, after some hesitation, “he is a person who knows his mind [and] is very determined to make it happen.”