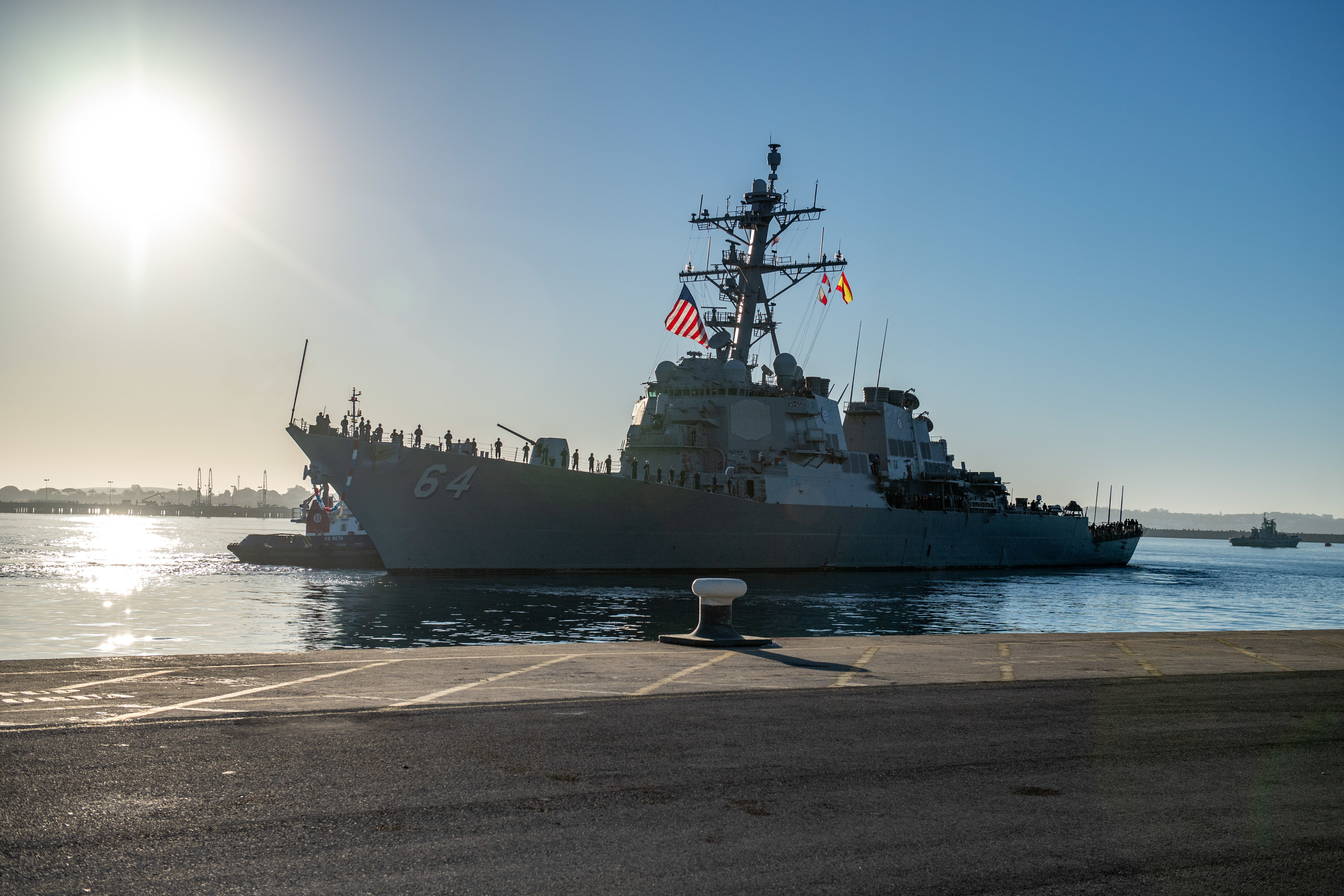 Destroyer USS Carney (DDG-64) is on its way back to Florida after serving for five years as part of the Forward Deployed Naval Force-Europe (FDNF-E) out of Naval Station Rota, Spain.

The Arleigh Burke-class destroyer left Rota on June 27 and will return to its former homeport of Naval Station Mayport, the Navy announced. USS Roosevelt (DDG-80) arrived in Rota on May 18 to replace Carney with its newer Aegis Baseline 9/Ballistic Missile Defense (BMD) 5.1 combat system.

“Carney’s role as one of our forward-deployed destroyers in Spain has been the cornerstone of the United States’ commitment to our NATO allies and partners, and to our combined integrated air and missile defense architecture,” Vice Adm. Lisa Franchetti, the commander of U.S. 6th Fleet, said in a Navy news release.
“Through all five years’ worth of operations and exercises, Carney Sailors set the bar high for readiness, interoperability, and combat effectiveness.”

Carney is the first of the four Rota-based DDGs to be swapped out and return stateside, as part of a Navy plan to rotate more capable DDGs into the busy theater. The sea service announced last year, “The U.S. Navy plans to rotate the four currently Forward Deployed Naval Force-Europe (FDNF-E) ships with newer, modernized ships in order to posture the most capable forces forward in the U.S. European Command (EUCOM) area of responsibility (AOR). Additionally, the U.S. Navy intends to relocate a helicopter maritime strike squadron (HSM) to Rota, Spain, in support of the destroyers, which will enhance the multi-mission roles of these ships.”

Roosevelt is the first Flight IIA Arleigh Burke DDG to serve in the FDNF-E fleet and brings with it the most recent advanced capability build (ACB) of the Aegis Combat System, which integrates weapons and sensors such as the Cooperative Engagement Capability; Evolved Sea Sparrow Missile; Mk 15 Close-In Weapons System Block 1B; and the Mk 41 Vertical Launching System, capable of supporting Standard Missile (SM) 3 and newer variants, the Navy previously stated.

These new capabilities allow the ship to conduct air and missile defense at the same time. When the original four DDGs started operating out of Rota, the Navy worried that they were solely watching the skies for missiles to protect European land infrastructure and didn’t have the capacity to simultaneously watch for threats to the ships themselves. This forced the Navy to figure out a plan to integrate Raytheon’s Sea Rolling Airframe Missile (SeaRAM) onto Aegis-equipped DDGs for the first time as an added means of self-protection for the ships.

The four DDGs were called into the Mediterranean after a 2011 agreement between the U.S., Spain and NATO to homeport four ballistic missile defense-focused ships in Rota as part of the United States’ European Phased Adaptive Approach to BMD.

According to a Congressional Research Service report, “Navy officials have said that the four Rota-based ships can provide a level of level of presence in the Mediterranean for performing BMD patrols and other missions equivalent to what could be provided by about 10 BMD-capable Aegis ships that are homeported on the U.S. east coast. The Rota homeporting arrangement thus effectively releases about six U.S. Navy BMD-capable Aegis ships for performing BMD patrols or other missions elsewhere.” 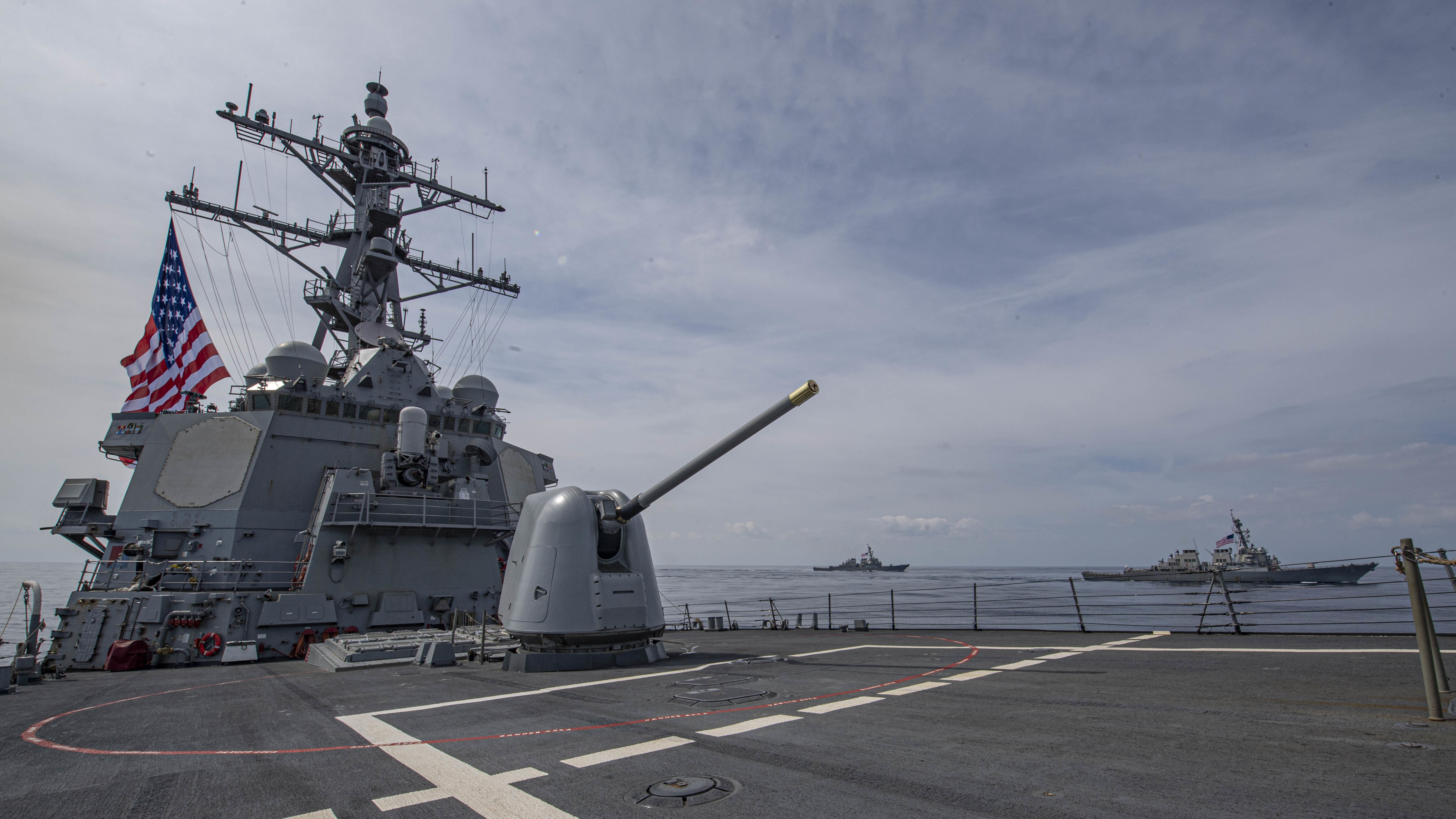 Carney has operated from the Baltic Sea to the Indian Ocean in its capacity as a FDNF-E ship, conducting 55 port calls in Europe, Africa and the Middle East, according to the Navy news release. The destroyer also participated in 11 large-scale exercises in the European theater with NATO allies and partners.

In its most recent patrol this spring, Carney shifted tactical control from 6th Fleet to U.S. 5th Fleet in support of national tasking alongside the Bataan Amphibious Ready Group (ARG).

“The unconventional FDNF-E patrol included port visits to the Seychelles and to Cape Town, South Africa, which reinforced the partnership between the U.S. and South Africa. While transiting back to Rota, Spain, Carney became the most recent ship in naval history to circumnavigate Africa instead of transiting north through the Suez Canal,” reads the news release.

“Carney‘s departure is a proud moment for all of us,” Capt. Joseph Gagliano, commander of Task Force (CTF) 65, said in the news release.
“In addition to the crew departing with pride for a job well done, we are proud to return Carney in peak readiness condition. Both the ship and crew are ready for any mission.”

“Working in 6th Fleet and under the direction of CTF 65 has been a phenomenal experience,” Cmdr. Christopher Carrol, Carney’s commanding officer, said in the news release.
“We were extremely blessed for the opportunities to meet the objectives of the Fleet.”