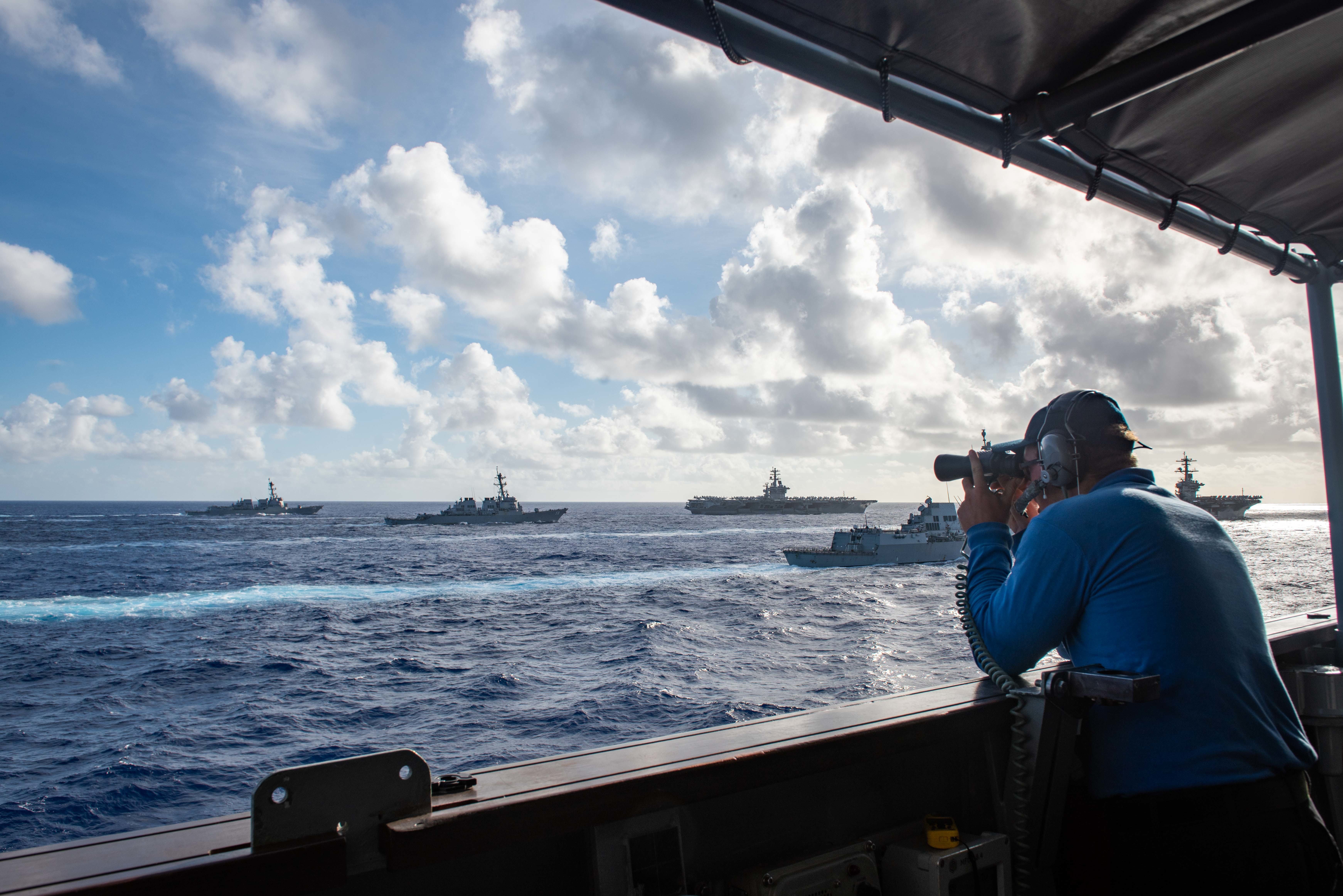 “Only the U.S. Navy can integrate a carrier strike force on this scale and consistently project power to protect freedom of the seas,” Rear Admiral James Kirk, commander of Carrier Strike Group 11, the Nimitz CSG, said in a news release.
“With more than 10,000 U.S. Navy Sailors from across the world working together as one cohesive team, these operations are what keep us ready to respond to any contingency.”

Though U.S. 7th Fleet had the somewhat rare presence of three full CSGs earlier this month, the three did not link up for a massive carrier event – though these same three carriers operated together for a few days off the Korean Peninsula in the fall of 2017 in the first tri-carrier operation since 2007.

Photos show the TR and Nimitz strike groups steaming in tight formation as well as conducting flight operations from the carrier decks through June 23. On June 24, the Nimitz CSG pulled into Guam for a short liberty break. Nimitz and Reagan CSG operations began June 28, though the Navy has not yet released photos of the two carriers together. 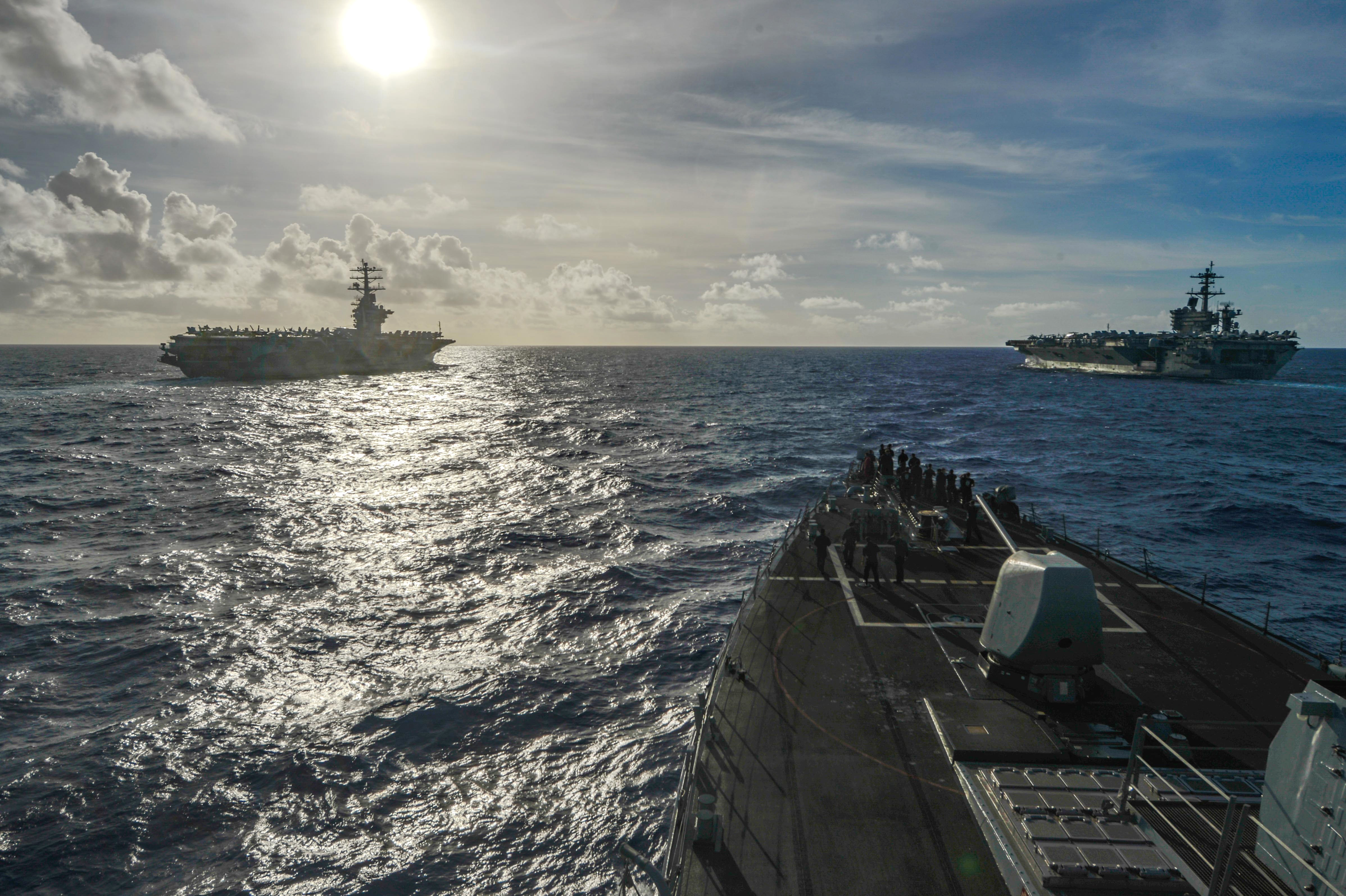 After wrapping up operating with the Nimitz strike group, the TR CSG headed east, beginning the trek home to San Diego at the conclusion of its deployment, the USNI News Fleet and Marine Tracker shows. Despite having to pause the deployment in March and April to deal with a COVID-19 outbreak on the carrier, the Theodore Roosevelt CSG deployed from the West Coast in mid-January and is due back home soon to keep the strike group to a typical six-month deployment length.

USS Ronald Reagan (CVN-76) wrapped up a maintenance period and subsequent trials and left for deployment on June 8, heading south to the Philippine Sea from its homeport in Yokosuka, Japan.

“We aggressively seek out every opportunity to advance and strengthen our capabilities and proficiency at conducting all-domain warfighting operations,” Rear Admiral George Wikoff, commander of Carrier Strike Group 5, or the Ronald Reagan CSG, said in a Navy news release.
“The U.S. Navy remains mission ready and globally deployed. Dual carrier operations demonstrate our commitment to regional allies, our ability to rapidly mass combat power in the Indo-Pacific, and our readiness to confront all those who challenge international norms that support regional stability.”

In November 2018, the Ronald Reagan and John C. Stennis carrier strike groups conducted combined operations in the Philippine Sea. Reagan and the Carl Vinson CSG operated together off the Korean Peninsula in May and June 2017 and were joined by Japanese warships, too. In June 2016, the Reagan and Stennis CSGs also operated together in the Philippine Sea, with the USS John C. Stennis (CVN-74) captain later telling USNI News that the two air wings took turns simulating the adversary force and eventually stressed their command and control structure by mixing the air wings’ squadrons together to create a mixed-CVW blue force and red force.