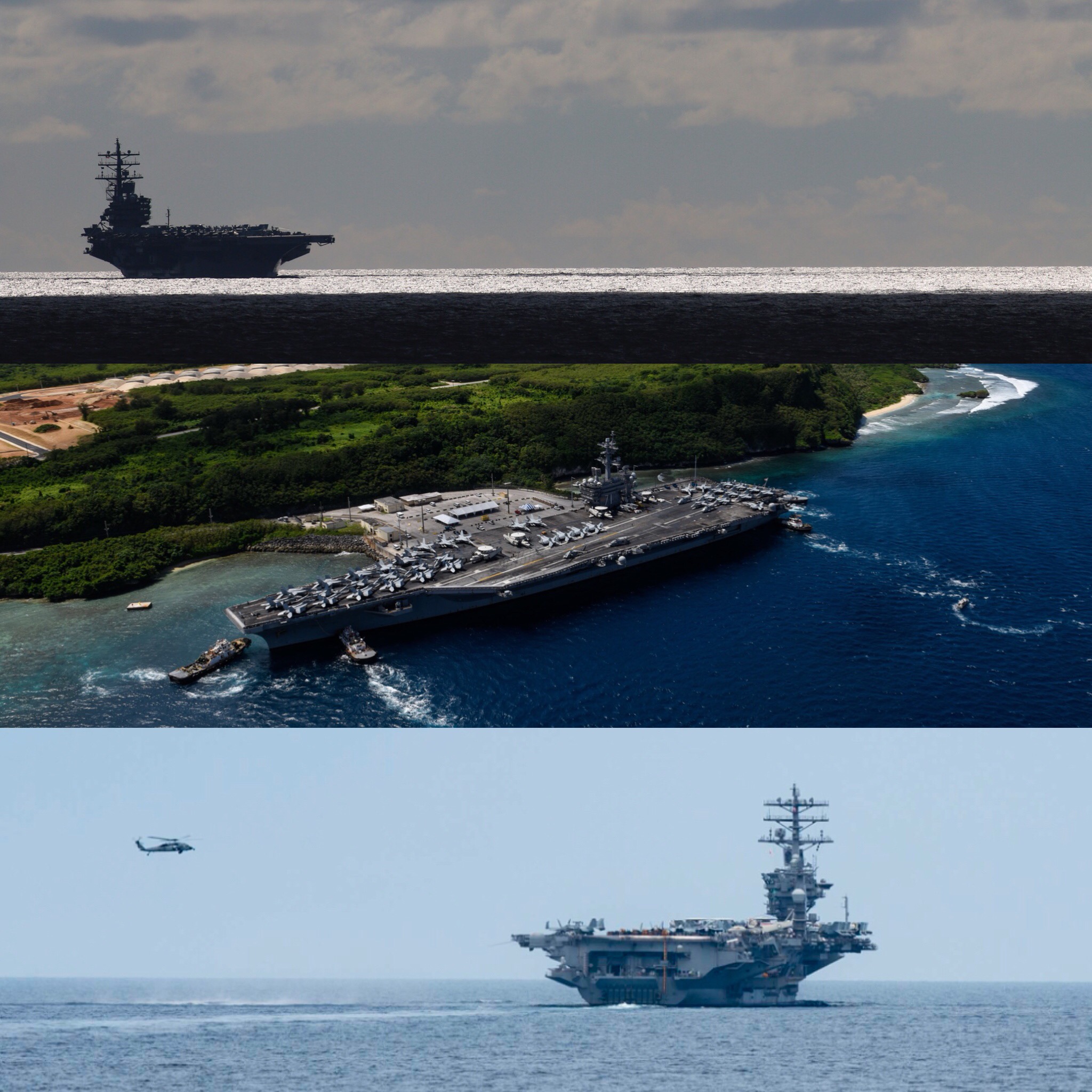 Three U.S. carrier strike groups will drill together – in the first tri-carrier operations in a decade off the Korean peninsula in the Sea of Japan, several sources confirmed to USNI News on Wednesday.

USS Ronald Reagan (CVN-76), USS Nimitz (CVN-68) and USS Theodore Roosevelt (CVN-71), along with their escorts and air wings, are set to meet off the coast of Korea for four days of exercises later this week.

“These three carriers are not there specifically targeting North Korea. … This is a routine demonstration of our commitment to the region,” Chairman of the Joint Chiefs of Staff Marine Gen. Joseph Dunford said last week.

Defense officials told USNI News that, since all three carriers entered U.S. 7th Fleet in October, there would be likely that at least two of the carriers conducting joint operations.

“It is a rare opportunity to train with two aircraft carriers together, and even rarer to be able to train with three,” said U.S. Pacific Fleet Commander, Adm. Scott Swift, said in a Wednesday statement.
“Multiple carrier strike force operations are very complex, and this exercise in the Western Pacific is a strong testament to the U.S. Pacific Fleet’s unique ability and ironclad commitment to the continued security and stability of the region.”

Nimitz is in transit to its homeport in Washington state, while Roosevelt is set to start operations in the Persian Gulf since departing last month from San Diego. Reagan has been operating off the Korean peninsula since last month.

In late May, Reagan and the Carl Vinson Carrier Strike Group conducted the first dual-carrier operations off of the Korean Peninsula since the late 1990s in reaction to a series of provocative missile tests conducted by North Korea.

News of the exercises comes as the Navy has seven carriers underway for the first time in years.

USNI News understands there will be international participation in the exercise, but it is still unclear which navies will join the exercise and in what capacity.

However, reports indicate the Japanese would send a ship following a separate exercise.

“A Japanese destroyer, the Inazuma, will join the armada, two Japanese government officials said, following a separate three-day exercise with the Reagan and two Indian warships in the Sea of Japan that ended Monday,” according a Tuesday report in newswire Reuters.

The tri-carrier operations will be the largest exercise since 2007, when the Nimitz, John C. Stennis and Kitty Hawk Carrier Strike Groups exercised off of Guam as part of Exercise Valiant Shield.

The drills come as President Donald Trump is on a state visit to the region and against a backdrop of increasing tensions between North Korea and Washington.

Trump was in Beijing on Wednesday and met with Chinese President Xi Jinping, in a meeting in which he was expected to discuss how to curb Pyongyang’s ongoing nuclear and ballistic missile tests.

“It is a rare opportunity to train with two aircraft carriers together, and even rarer to be able to train with three,” said U.S. Pacific Fleet Commander, Adm. Scott Swift. “Multiple carrier strike force operations are very complex, and this exercise in the Western Pacific is a strong testament to the U.S. Pacific Fleet’s unique ability and ironclad commitment to the continued security and stability of the region.”

While at sea, the strike force plans to conduct air defense drills, sea surveillance, replenishments at sea, defensive air combat training, close-in coordinated maneuvers, and other training.This is the first time that three carrier strike groups have operated together in the Western Pacific since exercises Valiant Shield 2006 and 2007 off the coast of Guam. Both exercises focused on the ability to rapidly bring together forces from three strike groups in response to any regional situation. Ronald Reagan took part in VS 2006 and Nimitz took part in VS 2007. More recently, U.S. Navy aircraft carriers have conducted dual carrier strike group operations in the Western Pacific including in the South China Sea, East China Sea and Philippine Sea. These opportunities typically occur when strike groups deployed to the 7th Fleet area of operations from the West Coast of the United States are joined with the forward deployed carrier strike group from Japan.

For more than 70 years, the U.S. Pacific Fleet has been a persistent and stabilizing presence conducting operations throughout the region. The Fleet is just as committed to maintaining those security commitments for the next 70 years.