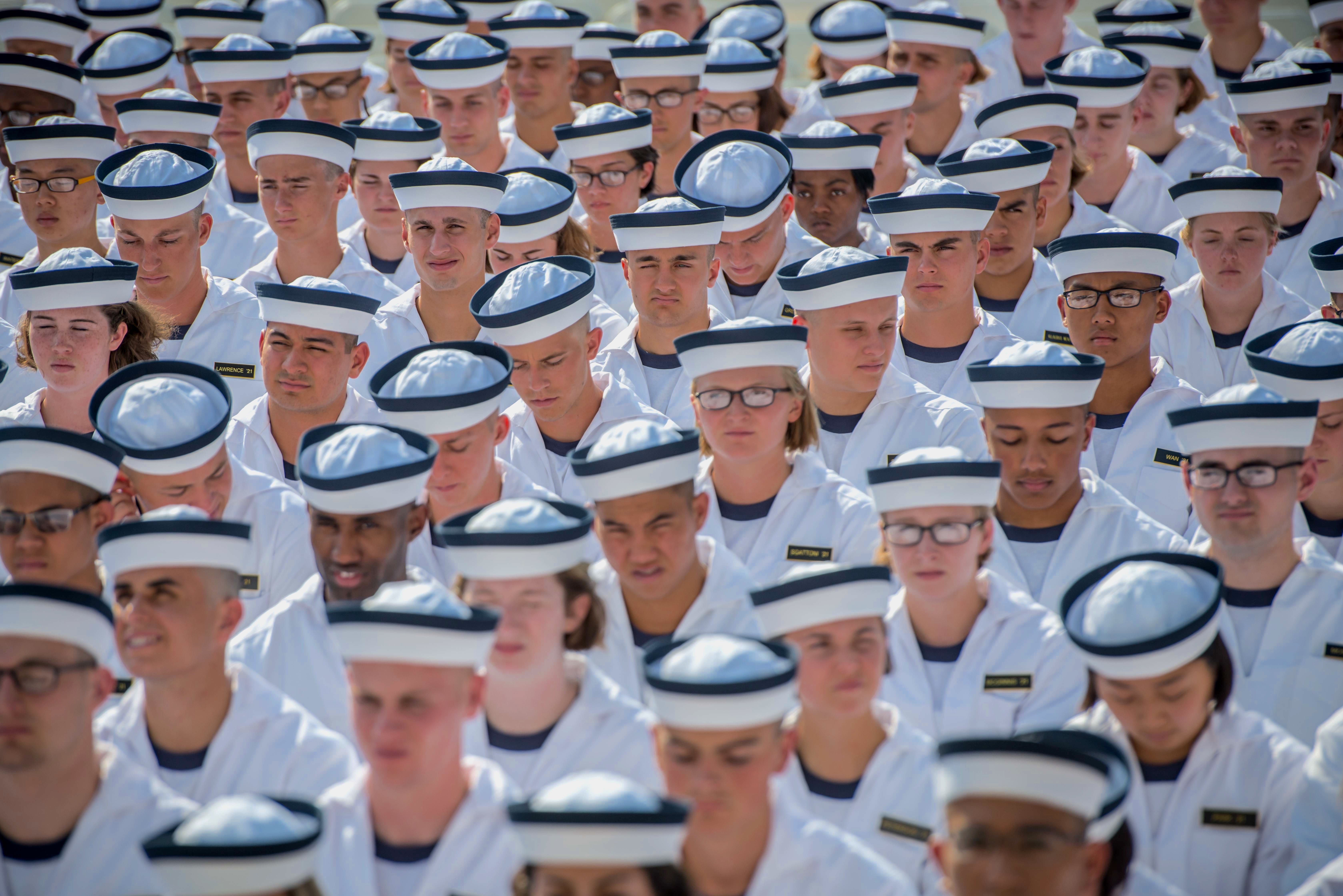 Incoming plebes participate in the Oath of Office Ceremony during induction day (I-day) 2017 at the U.S. Naval Academy. US Navy Photo

Keeping the Navy’s new officer pipeline open while mitigating COVID-19 risks means altering, delaying or even skipping some of the long-held traditions considered rites of passage for midshipmen.

The Navy canceled most NROTC and U.S. Naval Academy summer fleet training. Some specialized training for Marine Corps NROTC and Naval Academy Midshipmen is occurring with risk-mitigation efforts. The Navy is evaluating whether to grant exceptions to allow prospective SEAL and Explosive Ordinance Disposal officer candidates to be assessed this summer, Cmdr. Dave Hecht, a spokesman for the Chief of Naval Personnel, told USNI News.

For the U.S. Naval Academy, Plebe Summer – when new students start their indoctrination into life in the Navy and Annapolis – is starting a week later than usual on June 29. In another COVID-19-related change from past years, the class of 2024 is kicking off Plebe Summer by spending 14 days reading manuals while confined to Bancroft Hall, the Academy’s massive dormitory.

“Induction is being shifted by one week in order to take the necessary precautionary steps to safely induct and train the Class of 2024 amidst the COVID-19 pandemic,” Vice Adm. Sean Buck, the superintendent of the Naval Academy, said in a statement.

The Naval Academy is cleaning Bancroft Hall and moving all Plebe Summer instructors onto the Academy’s grounds. All plebes are required to endure a 14-day restriction of movement (ROM) once they arrive in at Annapolis. They are also being asked to self-isolate for two weeks before leaving for Annapolis, according to the Naval Academy. 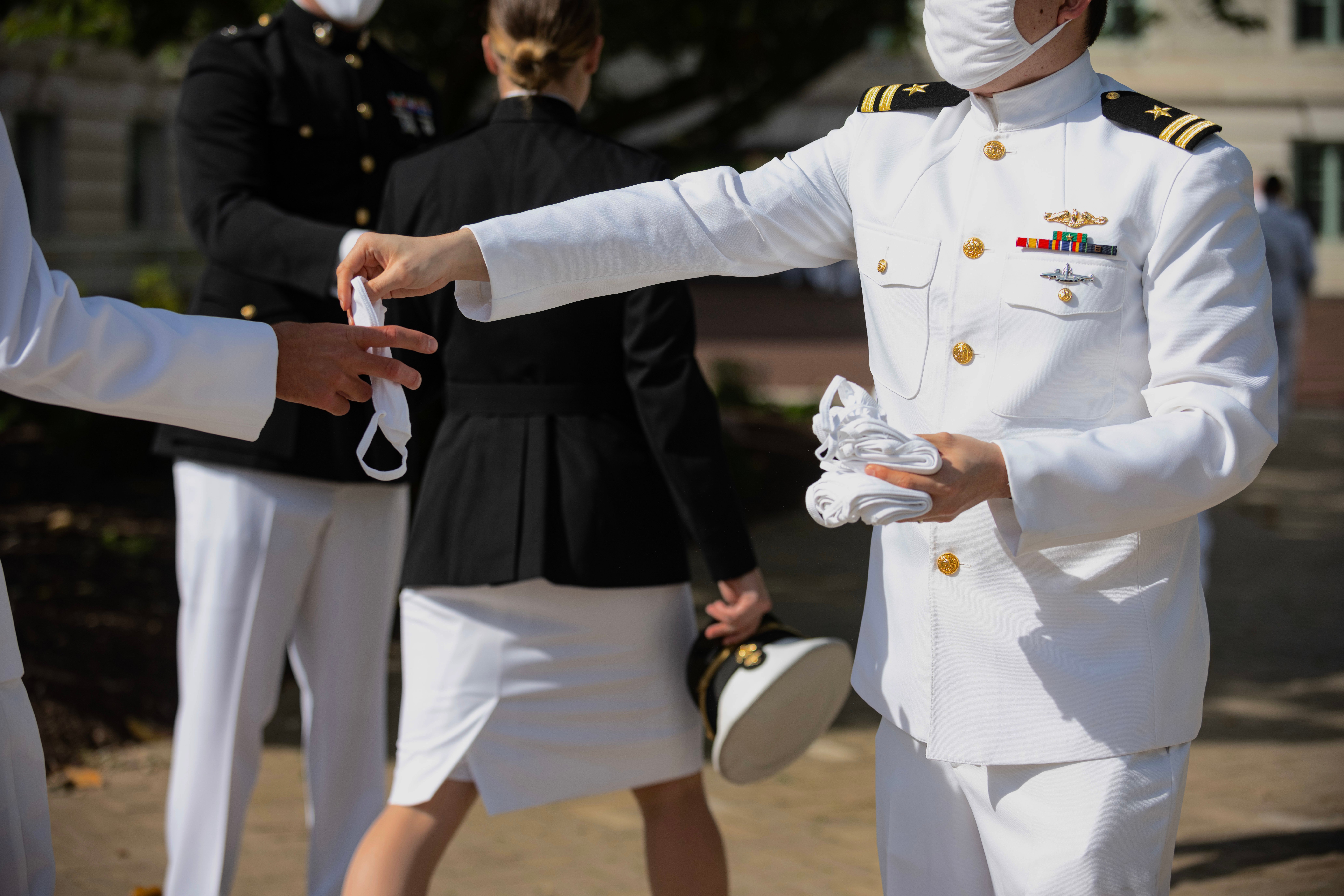 The U.S. Coast Guard Academy, U.S. Military Academy and U.S. Air Force Academy are all also bringing their respective classes of 2024 onto campus on June 29. The incoming class of 2024 at the U.S. Merchant Marine Academy is scheduled to arrive on campus on July 10. The U.S. Department of Transportation governs the Merchant Marine Academy, but graduates are commissioned as officers in the U.S. armed forces.

Other changes to the Naval Academy’s I-Day include parents not being permitted to enter the yard, tour their children’s new home, stock up on Academy and class of 2024 gear at the Mid Store and take part in what is typically a brief goodbye at the end of the day.

“During the ROM at USNA, plebes will be indoctrinated in the Naval Academy’s moral and mental missions through online lectures, and the study of the Navy’s Bluejacket Manual and Midshipmen Regulations Manual,” Capt. Thomas Buchanan, the commandant of midshipmen, said in a statement. “Similarly, upper-class midshipmen and staff who will be involved with the training of the incoming class over plebe summer will be in a ROM status to ensure the health and safety of all involved.”

At Annapolis, the Navy is trying to replicate a strategy employed by the Navy’s Recruit Training Center at Naval Station Great Lakes to create a sanitized bubble by placing all new arrivals under a two-week restriction of movement. Since April 30, all recruits arriving at boot camp have first completed a 14-day ROM at a nearby water park. The Great Wolf Lodge Water Park is closed to the public because of COVID-19, and the water attractions are not operating.

The Department of Defense policy is not to release COVID-19 numbers at the command level. However, last week Vice Adm. John Nowell, the Chief of Naval Personnel, said the trend at Great Lakes since April was positive enough for him to give the go-ahead to increase each incoming class to 750 recruits from what had been 500 recruits.

The Coast Guard is employing similar COVID-19 risk-mitigation measures at its Academy. Rear Adm. William Kelly, superintendent of the Coast Guard Academy, posted a message to the incoming class of 2024 – known as Swabs – detailing the relative safety of spending the summer in New London, Conn.

Among the reasons listed: the Coast Guard Academy is following the Centers for Disease Control and Prevention guidance, is screening 100 percent of cadets, and maintains strict cleanliness standards. “We are the military,” the list states. “Orders are give – and followed.”

“As you consider your college options in light of the COVID-19 pandemic, I want you and your family to know that the safety and health of each cadet is our top priority. My senior leadership team and I are working tirelessly to assess the risks presented by the virus, and taking action to address and mitigate these risks,” Kelly wrote.