The Navy’s advanced surface warfare exercises have been deemed mission essential and are moving forward amid coronavirus-related restrictions, demonstrating the surface navy’s dedication to improving its skill, the head of the Naval Surface and Mine Warfighting Development Center (SMWDC) told USNI News.

Rear Adm. Scott Robertson said that Surface Warfare Advanced Tactical Training (SWATT) exercises were able to continue with slight scheduling modifications and abundant precautions ahead of time to ensure that SMWDC personnel embedding on ships at sea weren’t bringing the virus with them.

During SWATT events, warfare tactics instructors (WTIs) embark on participating ships and help the crews through a plan, brief, execute and debrief (PBED) process that helps them think more critically about how they’re approaching warfighting problems, as well as to help them learn more advanced tactics for higher-end warfighting scenarios. The first SWATT occurred in 2016, and all deploying carrier strike groups (CSGs) and amphibious ready groups (ARGs) since 2018 have gone through them as part of required pre-deployment training.

“There was never any discussion about canceling” the Makin Island ARG SWATT that occurred March 30 through April 17, after the Navy and Defense Department enacted a stop-movement measure meant to limit the spread of COVID-19.
“I think the surface community as well as fleet commanders recognize that that is a critical training opportunity for the ships, so there was never any discussion about canceling it.”

“What it has forced us to do, though, is take a fresh look at the timing of our exercise. What I mean by that is, there could be a movement here to re-wicker the actual timing at which SWATT occurs, so that we can – if you can, picture potentially ships doing multiple exercises back to back so they don’t have to come into port,” Robertson continued, noting that minimizing returns to port during pre-deployment training would drive down the risk of an infection taking hold on a ship readying to head out on deployment.

That type of rescheduling is already taking place, with the Nimitz Carrier Strike Group leaving home for its final Composite Training Unit Exercise (COMPTUEX) and likely not returning home before it deploys to the Pacific.

However, to conduct the SWATT safely for all involved, the recently conducted “Makin Island ARG SWATT certainly presented us some very unique challenges,” Robertson said.

First, SMWDC typically pulls personnel for SWATTs from both coasts, with WTIs located around the country to support exercises and experimentation and working with industry to develop their own personal subject matter expertise fields. Robertson said he wanted to minimize travel for the WTIs, and for the first time ever SMWDC was able to resource a SWATT with just WTIs already in the San Diego area.

Second, all uniformed WTIs and civilian data collection engineers – more than 40 personnel total – who were going to the four ships participating in the Makin Island ARG SWATT had to go into a 14-day isolation to ensure they didn’t develop any COVID-19 symptoms. That meant that personnel had to be identified well ahead of time, so they could gather all the data, reports and other material they might need for the exercise before going into their quarantine period.

“You can imagine, you had to prep early, knowing you weren’t going to have access to classified material like you normally would here to prepare for embarking onboard a ship,” Robertson said. 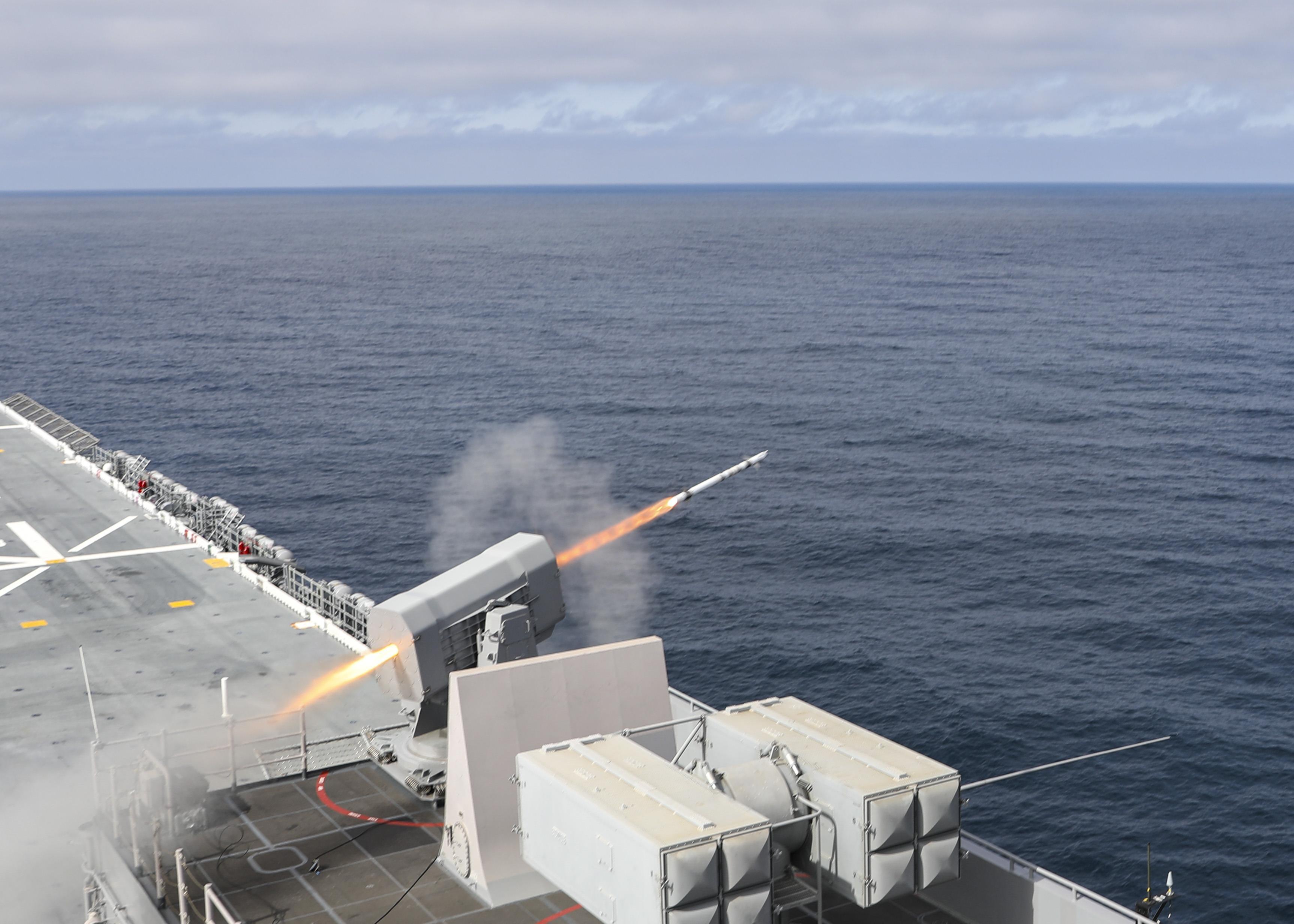 The admiral said SMWDC was able to cobble together the right people in San Diego for this event and would be able to conduct the next SWATT in the Atlantic with East Coast-only WTIs, but the next event after that would be a much larger exercise with many more ships, and that would involve bringing personnel from the West Coast out to support the East Coast event. Without getting into the timing of that large SWATT, Robertson said the command was already identifying the right personnel and looking into multiple travel options, including military or government aircraft that could be cleaned and filled with only those who had already quarantined for 14 days.

Robertson said SMWDC was looking at ways to potentially reduce the number of personnel needed on ships for SWATTs, but “there’s still a requirement to have a handful of WTIs on every ship to actually watch the ship’s combat team go through their paces, to be able to sit there and demonstrate the pros and cons with how they execute their tactics, and really doing that really thorough debrief. That’s really the power of having WTIs in the first place, and so we don’t have another means to be able to do that without having the WTIs there.”

For its long-term sustainability, SMWDC is constantly training new WTIs, who come into the organization for a “WTI production tour” where they learn the PBED process, the advanced skills, and how to host a SWATT, and then put those new skills to use teaching the fleet. After that tour, the WTIs then move on to their next assignment in the fleet, bringing with them the advanced surface warfare knowledge they gained to their next crew.

Though the DoD and Navy stop-movement order means that most sailors are not moving to new assignments now and the usual summer permanent change of station (PCS) frenzy is on hold, Robertson said the Navy has granted exceptions for new WTIs about to enter training, since a pause in new WTI production now would mean an inability to conduct enough SWATTs down the road.

“[Vice Adm. Rich] Brown, the type commander for the surface navy, has been in complete agreement with me. When I told him that I have two mission-essential tasks – one is SWATT and one is continue WTI production – he was in absolute agreement. So we have had no disruption to our WTI generation,” Robertson said.

SMWDC has changed some classroom configurations to allow for social distancing and created a blue/gold team construct for instructors, and he said the organization has had to get a little creative with the sequencing of events to limit how much travel the new students and the instructors have to do. But overall, SMWDC is still able to train new WTIs and evaluate their knowledge to the same degree as before – with a group of anti-submarine/surface warfare WTIs graduating on April 17, the first-ever group of mine warfare WTIs graduating on April 16 and Robertson conducting an online graduation for amphibious warfare WTIs on April 23.

“We still have to perform SWATTs to a high level, and we still have to continue to produce WTIs – it really speaks to the importance that’s placed onto SMWDC as an organization,” Robertson said. 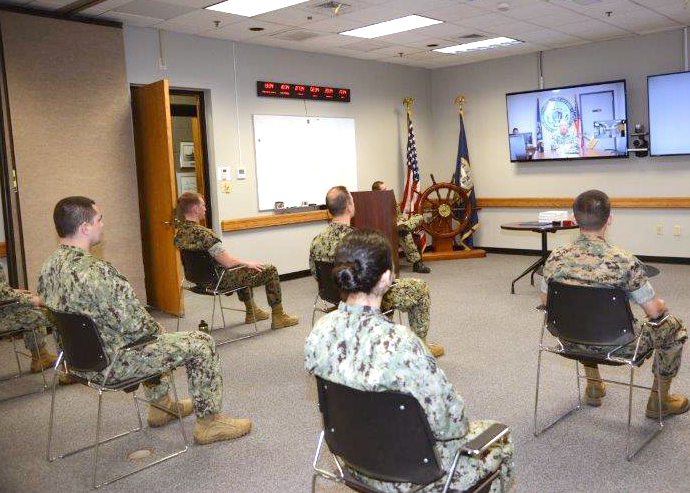 In fact, the organization isn’t just getting by during this time of restricted movement – it’s increasing the difficulty of its SWATTs by introducing live, virtual and constructive (LVC) training to the Makin Island SWATT for the first time ever, as part of Robertson’s plan to increase the difficulty of the training for the surface fleet.

“That’s been part of my vision for increasing the complexity of SWATTS all along, so this was our first big stepping stone towards actually incorporating LVC for some of their events. And it was very successful, we learned a lot about it, so LVC is going to become an increasing part of all of our future SWATTS,” he said.

Robertson made clear that all SWATT events would always include live gunnery exercises and live missile shots as a “critical” component of the training. However, he said, “the power of LVC, though, really kind of gives us that presentation piece that’s independent of weather; LVC isn’t subject to lack of aircraft availability or OPFOR availability; and it can do the things that are super expensive to do real-world, we can replicate that with high repetition in the LVC environment to truly replicate what the high-end environment would look like in terms of volume of fire or certainly the threat aperture.”

For the Makin Island ARG, he said “we were able to use it to great effectiveness to practice air defense.” As SMWDC grows more comfortable with LVC and the technology evolves, Robertson said the tools could be used to do much more, too.

“Firing missiles and having targets to shoot at is really expensive. And so LVC presents us opportunity to be able to go through threat-representative profiles without actually expending the actual ordnance,” he said.