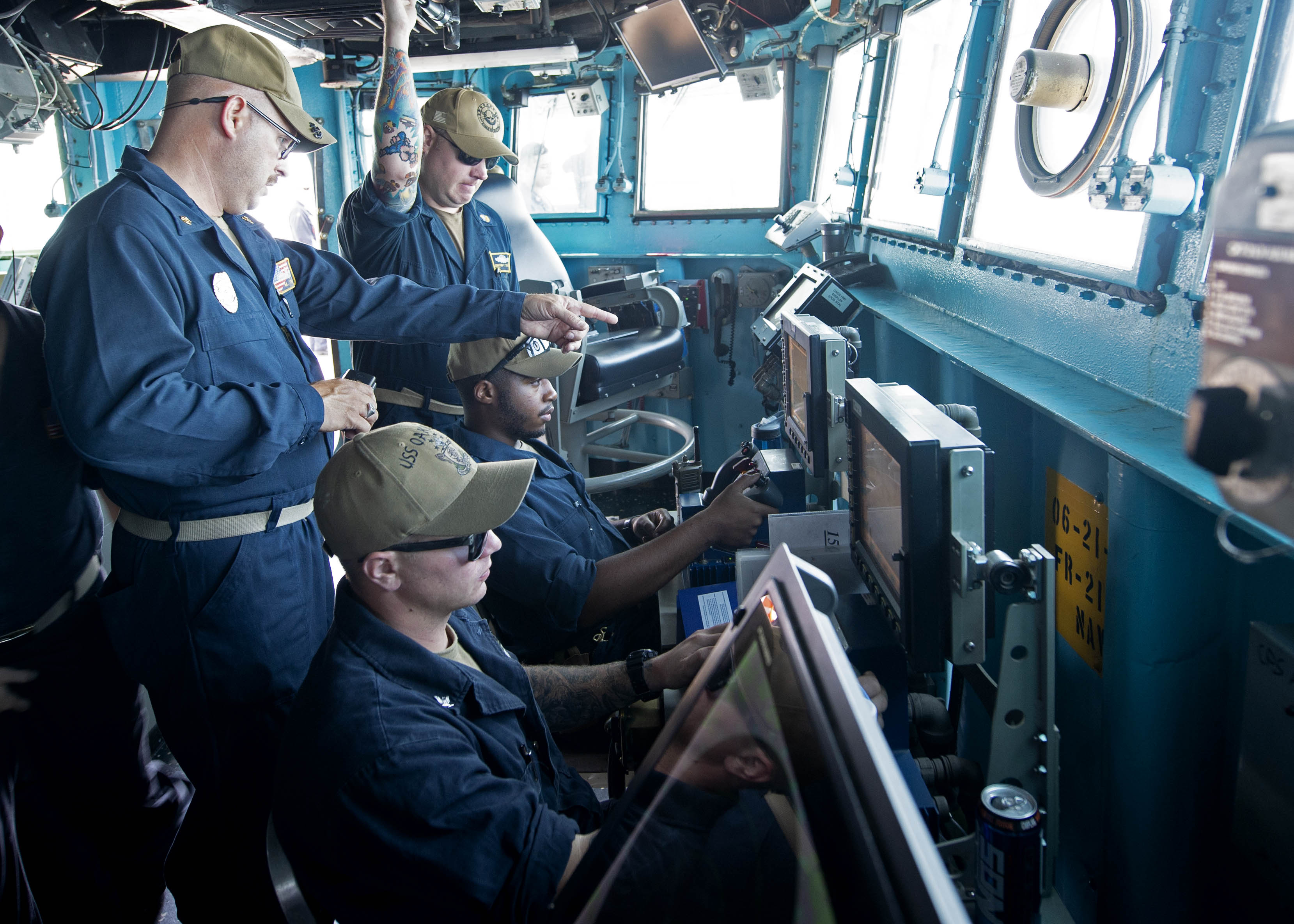 This post has been updated to correct the acronym Tactical Flag Communication Center, and to clarify that the SWATT events last 16 days.

ARLINGTON, Va. – The Navy’s surface warfare community wants to increase the proficiency of its officers and its ship crews by reassessing how it teaches fundamental warfighting skills and adding more complexity to pre-deployment training.

Starting with the individual officer, the Navy will revamp how it trains surface warfare officers by looking not at what knowledge SWOs must memorize at different points in their career but rather what skills they need to master and retain, Rear Adm. Scott Robertson, the commander of the Naval Surface and Mine Warfighting Development Center (SMWDC), told USNI News earlier this month at the Surface Navy Association’s annual symposium.

“Traditionally, most of the Navy training has been level of knowledge-focused: here’s what we think you need to know, we’re going to inject this knowledge to you, and then we’ll test for retention,” he said.
“I think we’re at the point here now, and the direction I’m going in is, I want to identify first, what are the skills, the warfighting skills, that we’re trying to build for a division officer, department head, executive officer, [commanding officer] and major commander? What are those innate, core warfighting skills that we must have in those officers?”

The surface navy took a similar approach to improving navigation, seamanship and shiphandling skills in the aftermath of a string of collisions in the Western Pacific in 2017, including two that killed a total of 17 sailors. The curriculum was revamped to focus on what skills needed to be mastered at what point in a SWO career, and then to add additional test points where SWOs would have to prove they still excelled at those shiphandling skills.

“Driving a ship is pretty narrow in the skillsets. The warfighting skillsets have to be applied to the fact that surface warfare encompasses all these different warfare areas, all these platforms. So it is a complex problem we’re trying to solve, but I’m pretty confident already. The initial direction we’re going in is really exciting,” said Robertson, who commanded the Surface Warfare Officers School Command in his last assignment and is quite familiar with how SWOs are currently trained.

He said the working group – led by Robertson but including representatives from SWOS Command, the Afloat Training Group, Carrier Strike Groups 4 and 15, the Center for Surface Combat Systems, Tactical Training Groups Atlantic and Pacific, and others involved in the continuum of training and concepts development – was “knee-deep” in taking a look at how the Navy trains its SWOs today and pinpointing what skills need to be learned. He said it would take a few more months to finish compiling the list of warfighting skills, and then the group would spend another five to six months mapping out what training today gets at some of those skills and where gaps and seams exist that would need to be filled in. 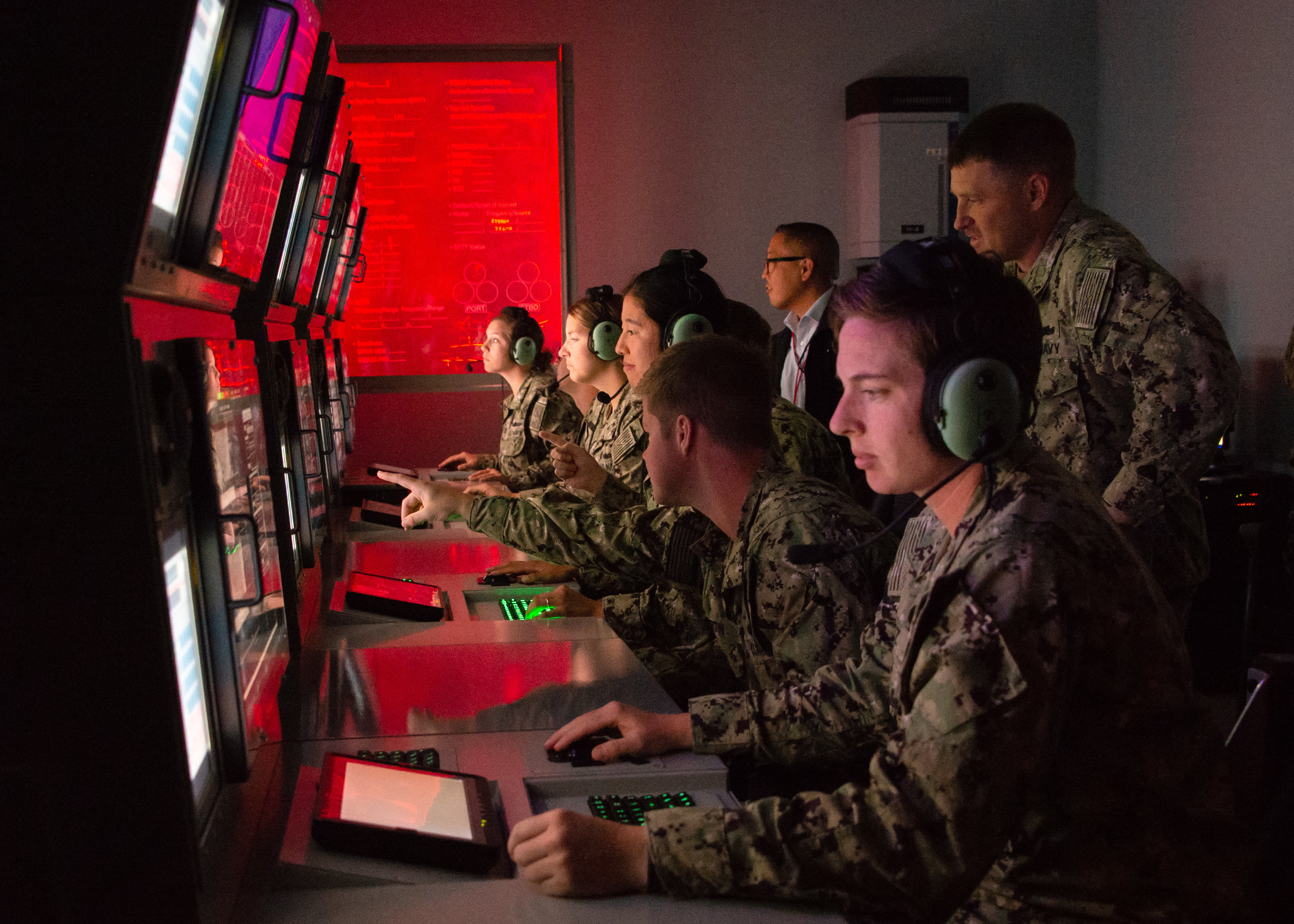 Skills including things like internal and external communications, decision-making, threat-recognition and other day-to-day tasks that were previously assumed an officer would pick up as their careers progressed.

“We kind of viewed that, you’ll develop the skills on the job. And I think that, for us to truly baseline our force and have a standard warfighting expectation, it’s important for us to make sure we’ve provided that training,” Robertson said.

He said that, if the surface navy can create a solid foundation of skills for individual officers, the watch teams and the ship crews will be all the more proficient and will be able to advance even farther during basic, advanced and integrated training ahead of deployments.

Each of those steps of training is also undergoing changes to help crews prepare for more dangerous operating environments under great power competition.

On the basic phase side, Vice Adm. Brown has encouraged ship COs to get through basic phase training requirements faster so that they use the freed-up time to take care of individual trainings and certifications, add more repetitions for skills that have challenged the crew, learn additional skills that could apply to the region they expect to deploy to, or add more complex training scenarios to better prepare for the advanced phase, where a full destroyer squadron comes together to operate as a unit at sea in a SMWDC-led Surface Warfare Advanced Tactical Training (SWATT).

“The MWOTT effort is all about the individual skills development, regardless of where you are at in your career. Because if we get that foundation right, then when we start doing unit-level training and team-type training, the aggregate level of knowledge is already starting at a different baseline,” Robertson said.
“That means that when ships are coming into our SWATT, their starting point is going to be different, so I’m able to get to the higher end and truly the advanced tactics and doing lots of reps and sets at that level. So that’s the methodology. In simple terms, right now SWATT is a crawl, walk, run methodology over 16 [days] of underway time, where you’re doing very low-density slow-paced exercises and then you increase the complexity as you go along. I want to get away from the crawl phase; I want to have ships coming in where we’re at walk, run, sprint, is the methodology I’m trying to get us to. The stronger foundation created by the MWOTT is going to help enable that.” 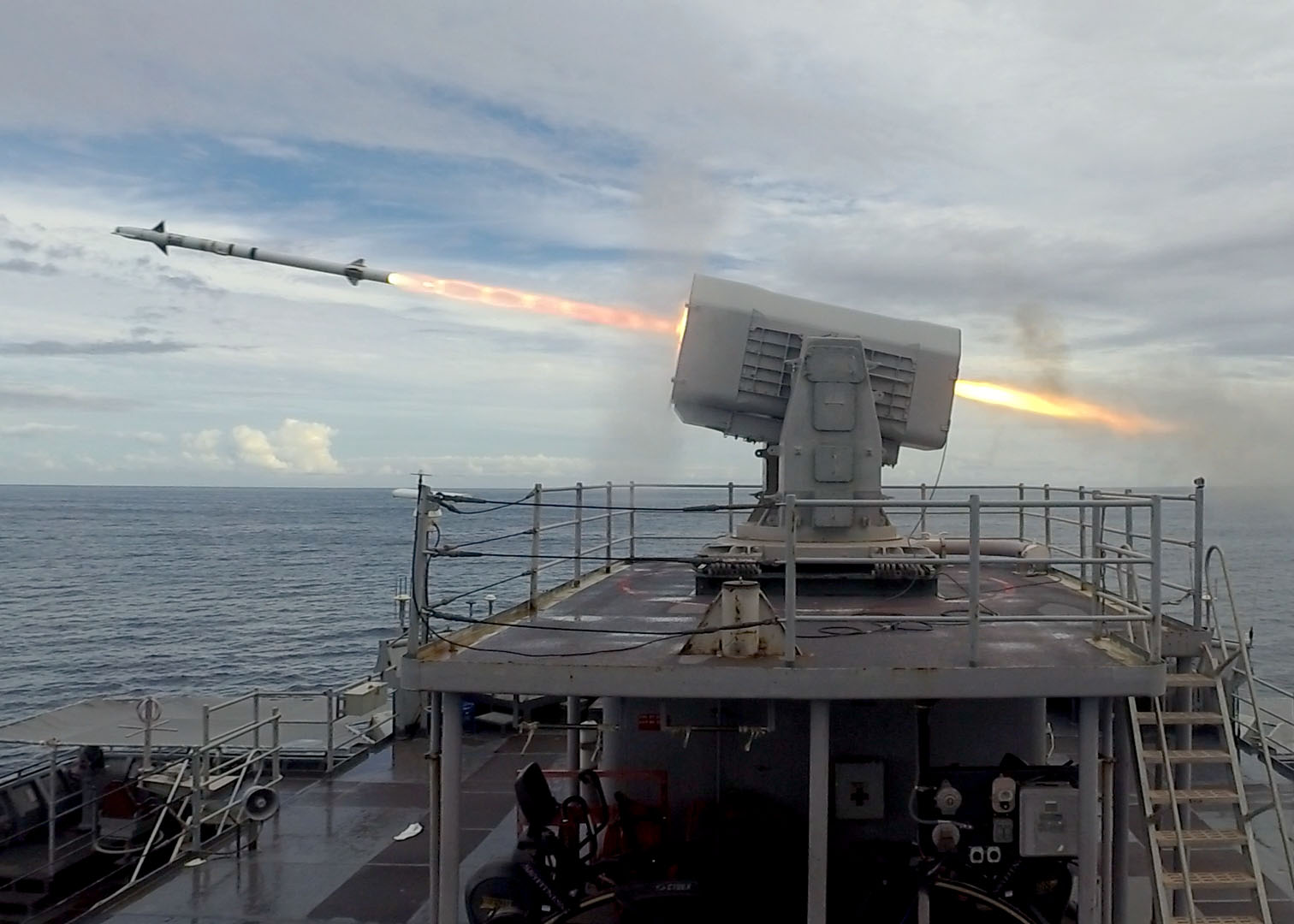 A rolling airframe missile (RAM) is fired aboard the Harpers Ferry-class amphibious dock landing ship USS Oak Hill (LSD 51) during a live-fire exercise while the ship participates in a Surface Warfare Advanced Tactical Training (SWATT) with other U.S. Navy warships on July 29, 2019. US Navy photo.

Even as the MWOTT effort to improve individual proficiency is ongoing, Robertson said he’s already in the midst of making SWATT more challenging, about two years after the exercise was introduced to the fleet as a routine part of pre-deployment workups.

“We’re looking to have more warfighting development centers integrating into our SWATT at-sea process. I’m looking to add more complexity to our live-fire events, including starting to get to nighttime events. And also creating more events that focus on offensive [tactics, techniques and procedures],” he said during the interview.

During the SWATT event, a team of warfare tactics instructors (WTIs) embark with the ships’ crews to help measure their performance, walk them through a planning and debriefing process, and quantitatively measure what went well and what needs improvement. Tools that can replay not only the audio of conversations on the bridge but also simultaneously show what the watchstanders could see on the radars at the time aid in learning from each event during the 16-day at-sea training event.

Robertson said SWATT is meant to quantitatively answer the question, “are we increasing the lethality of the ship?”

Robertson said he’s been partnering with the Afloat Training Group to share lessons learned about shortfalls in surface ship training when they arrive at SWATT, to help improve the basic phase training curriculum that ATG manages. He said he’s also been sharing more with ship CO’s so that, as they move through basic training faster and find more time in their schedule, they can plan the best training events to prepare for SWATT.

Finally, Robertson and SMWDC are working to introduce live, virtual and constructive (LVC) training tools to SWATT, to mirror what the ships are seeing once they join the air wing for integrated training and a final Composite Training Unit Exercise (COMPTUEX) before deploying.

Robertson said he’s working on the concepts of operations for including LVC tools in SWATT, so that the Navy can have a stated requirement for the capability and fund it in future budget years. He said most of the technology pieces are there, as the Navy has invested in them for COMPTUEX in recent years, but the shore-based sites would need to be staffed up to accommodate adding the SWATT events to their workload. 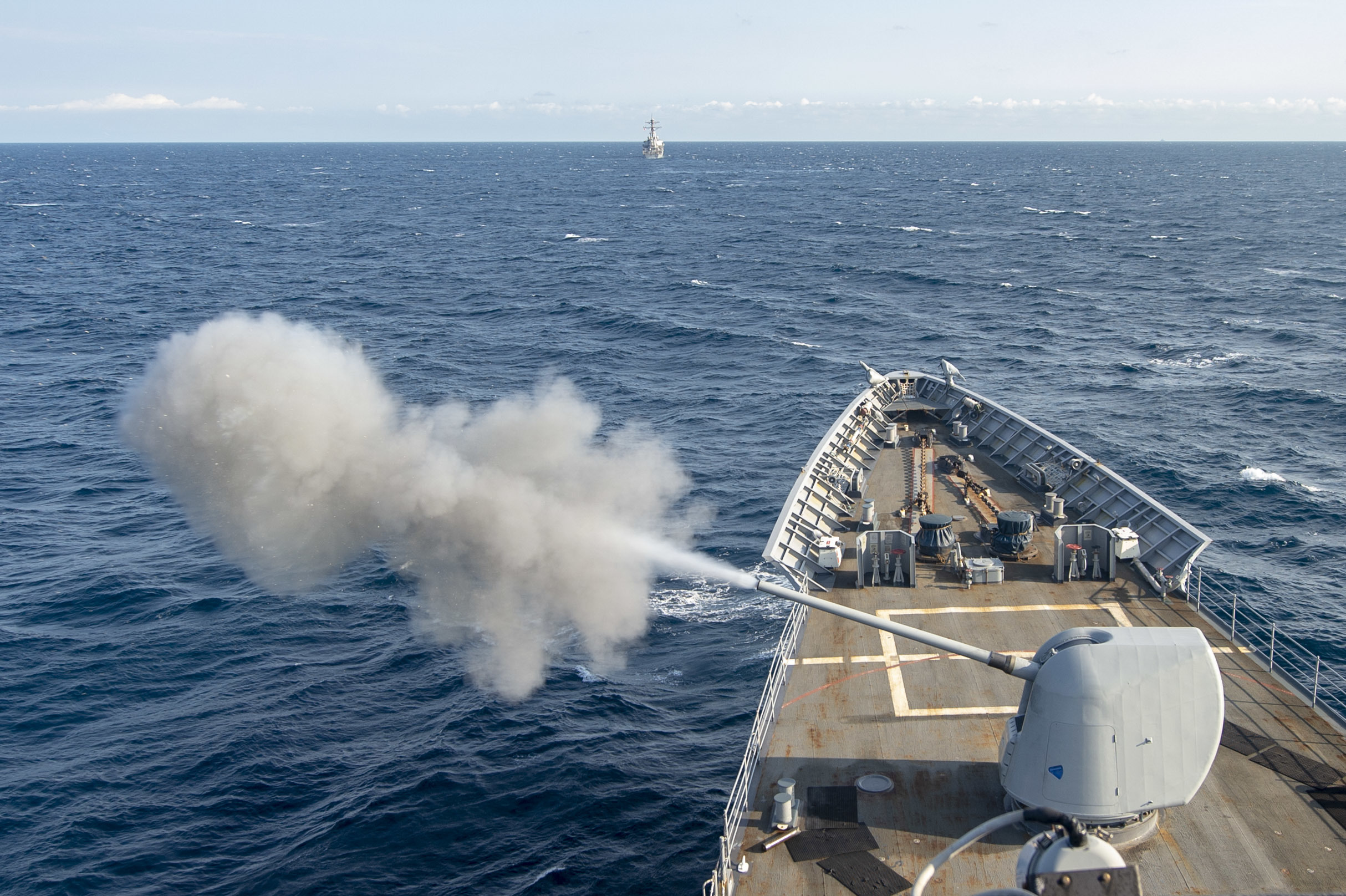 Adding LVC to SWATTs would allow crews to run final capstone events that are 24 to 48 hours long and include more threats than the Navy has targets for, or more complex warfighting maneuvers than the Navy wants to demonstrate in a live setting, for fear of revealing certain tactics to an adversary that could be watching.

Also during the SNA conference, Rear Adm. Gene Black, the director of surface warfare on the chief of naval operations’ staff (OPNAV N96) who in his last job led the Harry S. Truman Carrier Strike Group through a COMPTUEX that leveraged LVC training, said the LVC training in the Navy Continuous Training Environment allowed his CSG to train to a level and a scale not possible otherwise.

“In February of 2018, the Harry S. Truman Strike Group conducted our COMPTUEX deployment certification exercise off the Virginia Capes. COMPTUEX is an intense, 30-day exercise culminating in a final wargame to challenge the strike group to put all the planning and tactics, techniques and procedures together in a combat environment. During the final wargame phase of the exercise, through LVC, when my ships encountered the opposition force – in this case led by USS Bainbridge (DDG-96) – they were presented in the various combat information centers as peer competitor ships with the associated sensors, signatures and weapons capability currently fielded. So in CIC and in TFCC (Tactical Flag Communication Center), weapons performance and engagements looked just like the real thing,” Black said.
“Additionally, my fellow strike group commander Rear Adm. John Wade appeared as a second virtual carrier strike group in order to work carrier task force operations and planning between fleet and strike group staffs, though he and his staff were ashore in Dam Neck at [Tactical Training Group, Atlantic, in Virginia] and I was at sea.”