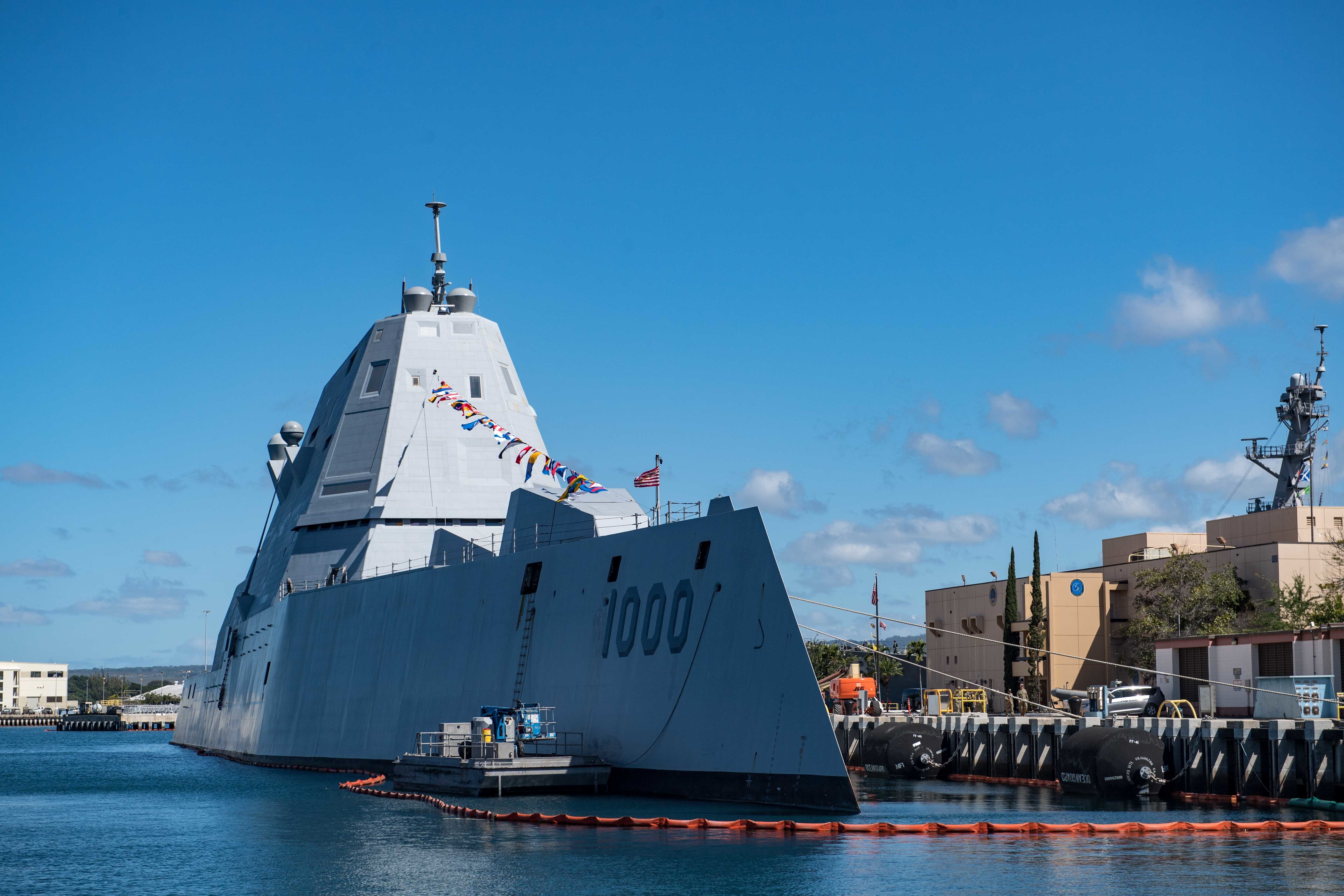 USS Zumwalt (DDG-1000) pierside in Pearl Harbor during a port visit in 2019. US Navy Photo

This post has been updated to include additional information about second-in-class USS Michael Monsoor.

The destroyer will now count towards the Navy’s battle force ship totals, though operationally the announcement of the delivery doesn’t change much for the ship crew or the fleet. Zumwalt will still continue conducting at-sea developmental and integrated testing, ahead of next year’s planned initial operational test and evaluation (IOT&E) and declaration of initial operational capability (IOC).

“Delivery is an important milestone for the Navy, as DDG 1000 continues more advanced at-sea testing of the Zumwalt combat system,” Capt. Kevin Smith, DDG 1000 program manager, said in a Navy statement. “The combat test team, consisting of the DDG 1000 sailors, Raytheon engineers, and Navy field activity teams, have worked diligently to get USS Zumwalt ready for more complex, multi-mission at-sea testing. I am excited to begin demonstrating the performance of this incredible ship.”

In addition to its testing requirements, Zumwalt had already been assigned to the Surface Development Squadron 1 (SURFDEVRON) as part of the surface navy’s efforts to work out tactics, techniques and procedures for the new class of destroyers and understand how the Zumwalt class could operate alongside other types of ships – manned and unmanned – to add the most capability and lethality to the force. Zumwalt will remain under SURFDEVRON and will continue experimental activities with the command.

“Every day the ship is at sea, the officers and crew learn more about her capability, and can immediately inform the continued development of tactics, techniques, and procedures to not only integrate Zumwalt into the fleet, but to advance the Navy’s understanding of operations with a stealth destroyer,” Zumwalt Commanding Officer Capt. Andrew Carlson said in the news release.
“After sailing over 9000 miles and 100 days at sea in 2019, we are absolutely looking forward to more aggressive at-sea testing and validation of the combat systems leading to achievement of initial operational capability.”

The Navy commissioned Zumwalt in October 2016, but a law passed by Congress shortly afterwards prohibited the Navy from accepting delivery of a ship that wasn’t fully outfitted with its combat capability. Zumwalt and its two sister ships have used a two-phased delivery method, with the hull delivering from builder General Dynamics Bath Iron Works in Maine and then undergoing a combat systems installation and activation at BAE Systems in San Diego. Raytheon Integrated Defense Systems was the prime contractor that oversaw the combat system activation and integration effort.

Asked what the remaining test schedule looks like, a Navy spokesperson told USNI News that “post-delivery test and trials were re-phased to align to a traditional surface combatant post-delivery period, completing developmental testing and IOT&E prior to the ship’s Post Shakedown Availability. Based on this re-phasing, IOC shifted from Sept 2021 to Dec 2021. USS Zumwalt is on track to meet the December 2021 date, at which point the ship will be ready for its basic training cycle and full fleet tasking.”

The next-in-class destroyer, USS Michael Monsoor (DDG-1001), is also in San Diego for its combat systems activation. The third ship, the future Lyndon B. Johnson (DDG-1002), remains under construction in Maine.

Monsoor’s combat system work is moving along faster than first-in-class Zumwalt, Smith, the program manager, said last year. He noted that lessons learned from the first ship on how to install the combat system in San Diego were helping speed up the work on the second.

“DDG 1001 completed her Combat System Availability in March 2020 and work has transitioned to the next phase for developmental and integrated at-sea testing of weapons, sensors and communication systems,” Navy spokesman Capt. Danny Hernandez told USNI News.