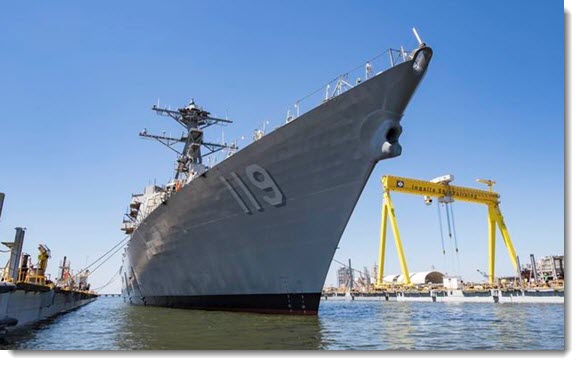 DDG-119 was launched in September 2017 and was scheduled to commission in 2019. However, Delbert D. Black was damaged a year ago by a barge supporting electrical work on the then-unfinished destroyer. The incident occurred when heavy-lift ship M/V Hawk, delivering a floating dry dock to Pascagoula from Qingdao, China, struck the barge, which then collided with Delbert D. Black.

Ingalls’ medical personnel treated minor injuries at the scene. Delbert D. Black took on water, which caused the production delay. Delivery of DDG-119 to the Navy is now expected to occur later in 2020, with the commissioning ceremony to follow.

“DDG-119’s exceptional performance during these trials is a direct reflection of the teamwork between Ingalls Shipbuilding and the Navy,” reads a statement from Capt. Nathan Schneider, the Gulf Coast supervisor of shipbuilding, conversion and repair.
“I am proud of this ship and I am extremely proud of the Ingalls Shipbuilding and Navy team that built her. Right behind DDG-119 are follow-on DDGs that will be even better, including the first Flight III DDG, which is a real game-changer.”

Delbert D. Black is built with the Aegis Baseline 9 combat system, which, when compared to older Arleigh Burke-class destroyers, increases the computing power and brings radar upgrades designed to improve the crew’s ability to detect and react to air warfare and ballistic missile threats. The future Jack H. Lucas (DDG-125) will be the first Flight III destroyer and the first built with Aegis Baseline 10.

“The ship performed exceptionally well and demonstrated that the ship is materially ready to execute her mission,” Capt. Seth Miller, the DDG-51 class program manager within the Program Executive Office (PEO) Ships, said in a statement.
“The success of these trials validates this highly capable ship will be a force multiplier when she joins the fleet.”

Huntington Ingalls Industries’ Pascagoula shipyard is building DDG-119. The modified version of the Aegis Combat System creates a composite picture of the battlespace by enabling ships such as Delbert D. Black to link radars with other ships and aircraft. The new destroyers can perform traditional air warfare missions and ballistic missile defense missions simultaneously. Ships without Baseline 9 have to operate in pairs to conduct both missions at the same time.