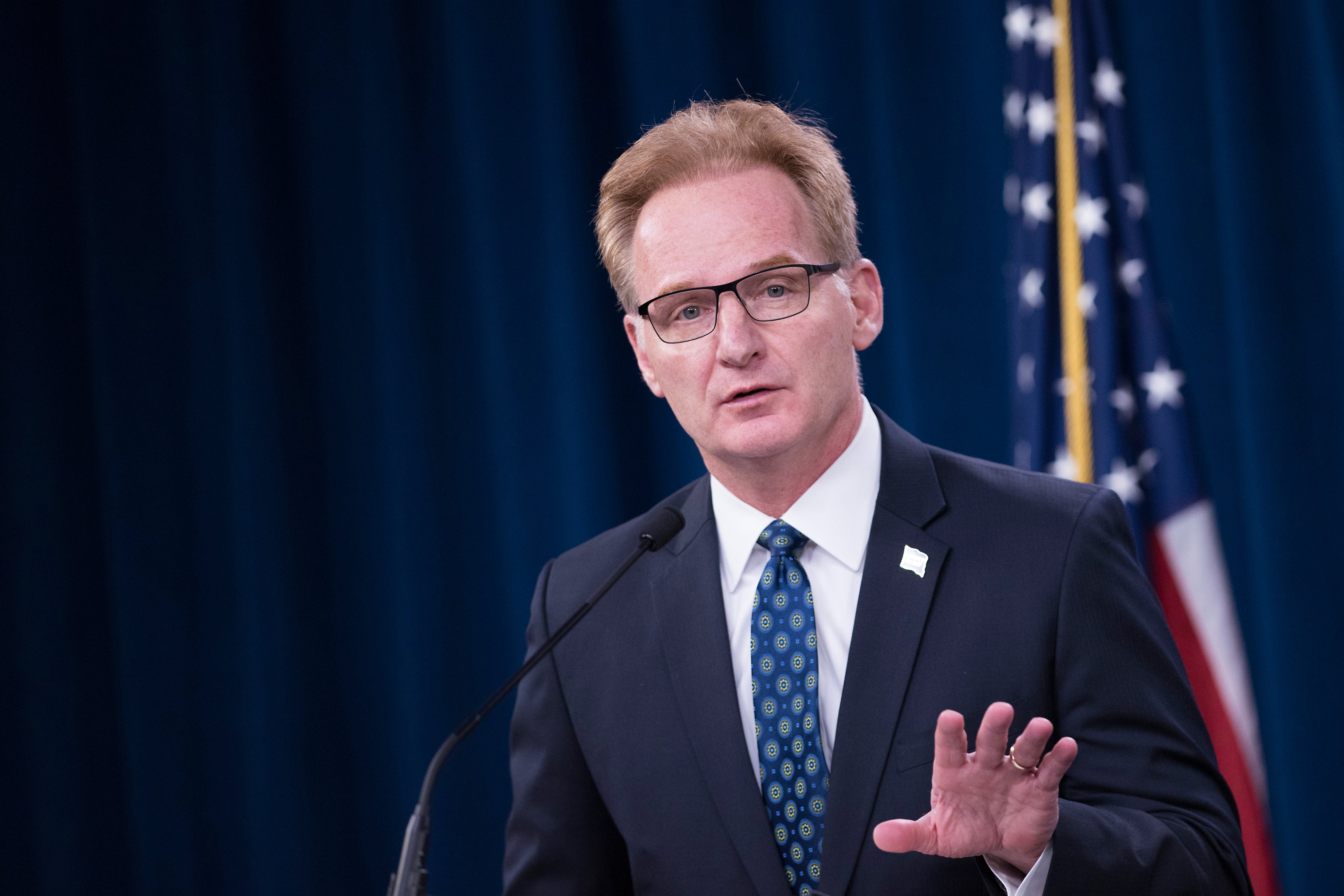 In his last days in office, former acting Secretary of the Navy Thomas Modly tried to assign names to the Navy’s new class of guided-missile frigates and the second Columbia-class nuclear ballistic-missile submarine.

He wanted the first of the new class of FFG(X) frigates, expected to be awarded in July, to be called USS Agility (FFG-80), according to a directive obtained by USNI News.

Many in the acquisitions community question the efficacy of naming a class of ship before the contract is awarded, several Navy officials told USNI News. Modly’s reasoning for suggesting Agility is detailed in a draft media statement that would have announced the naming, also obtained by USNI News, that would have been released when a formal announcement was made.

“I am honored to name this entire class of fast frigates after the kind of uniquely American brand of agility — agility that wins, and agility that will shape our maritime presence and ability to fight wherever we are called upon to do so,” the draft announcement said. “It is my desire that future ships of the Agility (FFG-80) Class will also be named after those many other unique human qualities that help define what it means to be an American sailor and Marine.”

The draft statement also provides future Secretaries of the Navy some names to consider for future Agility-class frigates. The possible names are described as possessing similar defining qualities like Dauntless, Endeavor and Intrepid.

Previously, Intrepid was used to name the World War II-era Essex-class carrier USS Intrepid (CV-11). The ship was decommissioned in 1974. Today, the carrier is a museum berthed in the Hudson River in New York and is the centerpiece of the Intrepid Sea, Air & Space Museum. A Space Shuttle was also named Endeavor. The U.K. Royal Navy currently has a Type 45 guided-missile destroyer named HMS Dauntless (D33).

“Based on tradition the Navy normally names the class of ships upon contract award, said Capt. Danny Hernandez, a spokesman for the Navy told USNI News. “The names of the guided-missile frigate class and the second Columbia-class submarine are pending and will be reviewed by the incoming acting Secretary of the Navy.”

While acting secretary, Modly did select a ship name that is widely praised for its inclusiveness. The fourth Ford-class aircraft carrier, CVN-81 will be named in honor of World War II icon Doris Miller, the first black recipient of the Navy Cross.

During the Imperial Japanese Navy attack on Pearl Harbor in 1941, then Mess Attendant 3rd Class Miller took charge of an anti-aircraft battery on USS West Virginia (BB-48) firing on enemy aircraft until running out of ammunition. Miller then helped the ship’s commander and several others off the ship before it sank. He was killed in 1943 by a Japanese torpedo attack on escort carrier USS Liscome Bay (CVE-56).

After World War II, the Navy focused naming warships for famous battles, cities, states, U.S. naval heroes and prominent politicians such as presidents. The Navy stopped naming submarines after fish in the 1970s

“Adm. James D. Watkins, the Chief of Naval Operations, said in an interview that the policy originated while Adm. Hyman G. Rickover was in charge. ‘Rickover said, ‘Fish don’t vote,’ ” reported The New York Times in 1985.

“The Columbia-class of nuclear ballistic missile submarines were named for elements of the Founding of America. Columbia was a historical name for the new world and a female personification of the United States of America. Republic denotes ‘of the people’ – a defining characteristic of the American democratic government formed in 1787,” Modly wrote in a memo.

However, by stating Columbia is named to honor a “female personification of the United States,” Modly left out of his memo the submarine was named to honor Washington, D.C.

“On December 14, 2016, the Navy named the first of its 12 planned next-generation ballistic missile submarines Columbia (SSBN-826), in honor of the District of Columbia,” reads an April 3 Congressional Research Service report. The Navy, the report added, had not yet stated the naming rule for the rest of the ships.

Former Secretary of the Navy Ray Mabus informed Congress in 2016 the first of the new class of ballistic missile submarines was to be named Columbia in honor of Washington, D.C. Throughout history, at least eight U.S. ships, a Space Shuttle and the Apollo 11 command module were all named Columbia. The submarine Columbia is the first time the name is used to commemorate the nation’s capital, USNI News first reported.

District of Columbia officials did not immediately respond to USNI News requests for comment.

While it’s unclear how long Modly considered suggesting Republic for the second Columbia-class, his idea to name the new frigate class Agility had been in the works for months and discussed by several senior Navy leaders, several Navy sources told USNI News.

Modly’s suggestion to name the class Agility shouldn’t come as a surprise. Looking back at Modly’s speeches and prepared remarks reveals how frequently he peppered his language with either “agility” or “agile” to describe his vision of the future Navy’s sailors and the equipment.

“During my recent testimony to Congress, and in various speeches and communications I have delivered over the past several years, I have tried to make the case for a more agile naval force, defined by more agile people, to address a future that would be predominantly defined by uncertainty,” Modly wrote in his March 20 Vector, titled “Agility in Time of Crisis.”

The memo, which focused on what was then a rapidly evolving military and national response to COVID-19, detailed Modly’s view of the importance of creating an agile force.

“This moment also underlines why agility matters so much for the future of our integrated American naval force,” Modly wrote. “We must cultivate the qualities of agility to address challenges posed by known competitors/adversaries, but especially for those threats we cannot see or ever predict.”

In December, Modly reprogramed $100 million in the Navy’s budget to increase education funding. Earlier this month, Modly hired the first president of the newly-formed Naval Community College. A chief learning officer was appointed in October to shepherd the Navy’s education overhaul.

In the opening of last month’s Education for Seapower Strategy, Modly wrote the document was necessary, “to align the policies and resources required to produce a better educated and more agile naval force – for officers, enlisted, and civilians alike.”

In April 2018, Modly spelled out his vision for an adaptable, agile force while delivering a keynote address at the Navy League’s annual Sea Air Space symposium.

“A larger force is necessary but a larger, more agile force will be the key determinant of the success of our maritime strategy,” Modly said at the conference.

Modly’s embrace of creating an agile force predates his arrival at the Pentagon. Six years ago, he discussed what it meant for defense organizations to be agile while he worked as the Global Government Defense Network Leader at the global consultancy PwC.

“Agility in defense is more of an aspiration than it is a reality for most defense organizations today. But I also think it’s a mandate because what we’re finding is over the course of the last 20 or 30 years the range of adversaries that challenge defense organizations and nations themselves have become much more broad, much more diverse and you find that the destructive potential of small adversaries, individuals has become much higher and disruptive to society than you used to see in the past,” Modly said in a 2014 PwC interview posted to YouTube.

“What that’s requiring is for defense organizations to be able to adapt to change to be innovative and collaborative in their approaches cooperating with allies,” Modly said.