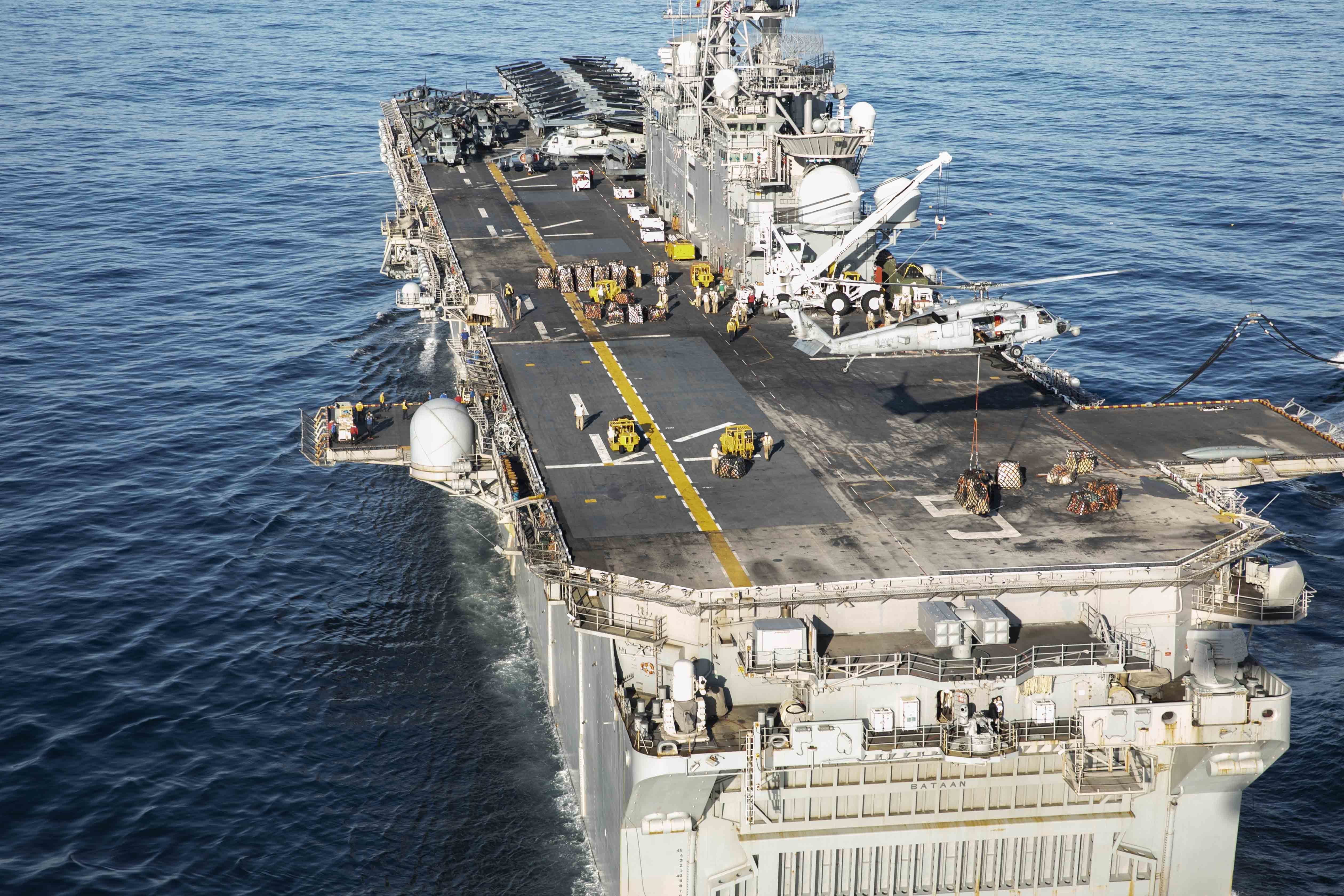 An MH-60S Knight Hawk, assigned to the Dragon Whales of Helicopter Sea Combat Squadron (HSC) 28, places cargo on the flight deck of the Wasp-class amphibious assault ship USS Bataan (LHD5), during a vertical replenishment between Bataan and the dry cargo and ammunition ship USNS William McLean (T-AKE-12) on Dec. 31, 2019. US Navy Photo

The ships and Marines have been operating in 5th Fleet since January after leaving the East Coast in December.

Last fall, Truman was sent to relieve USS Abraham Lincoln (CVN-72) in the Middle East, as part of an apparent strategy to keep at least one capital ship in the region.

Nearly a year ago, Lincoln was scrambled to the Persian Gulf region in response to a request from CENTCOM commander Gen. Kenneth McKenzie at the urging of then-National Security Advisor John Bolton.

At the time, White House and Pentagon officials cited unspecified “indications of heightened Iranian readiness to conduct offensive operations against U.S. forces and our interests,” as the reason for quickly sending Lincoln to the region from the Mediterranean. The Pentagon also deployed an Air Force bomber task force, an Army Patriot anti-ballistic missile battery and amphibious warship USS Arlington (LPD-24).

Tensions in the region decreased during the summer, but the Navy has maintained a near-constant presence in the region.

Truman is on its second deployment in two years, a move the Navy found necessary when repairs to USS Dwight D. Eisenhower (CVN-69) dragged on for 18 months – triple the amount of time initial thought necessary.

However, Truman’s departure was delayed when it experienced an extensive electrical malfunction in August. Lincoln was in the middle of homeport switch, from Norfolk to San Diego when Truman’s departure was delayed. Lincoln arrived in San Diego on January 20, after spending 295 days away from homeport, the most for a deployed carrier since the mid-1970s.

After relieving the Lincoln Carrier-Strike Group in December, Truman operated in a tight area in the North Arabian Sea and the Gulf of Oman, according to the USNI News Fleet and Marine Tracker.