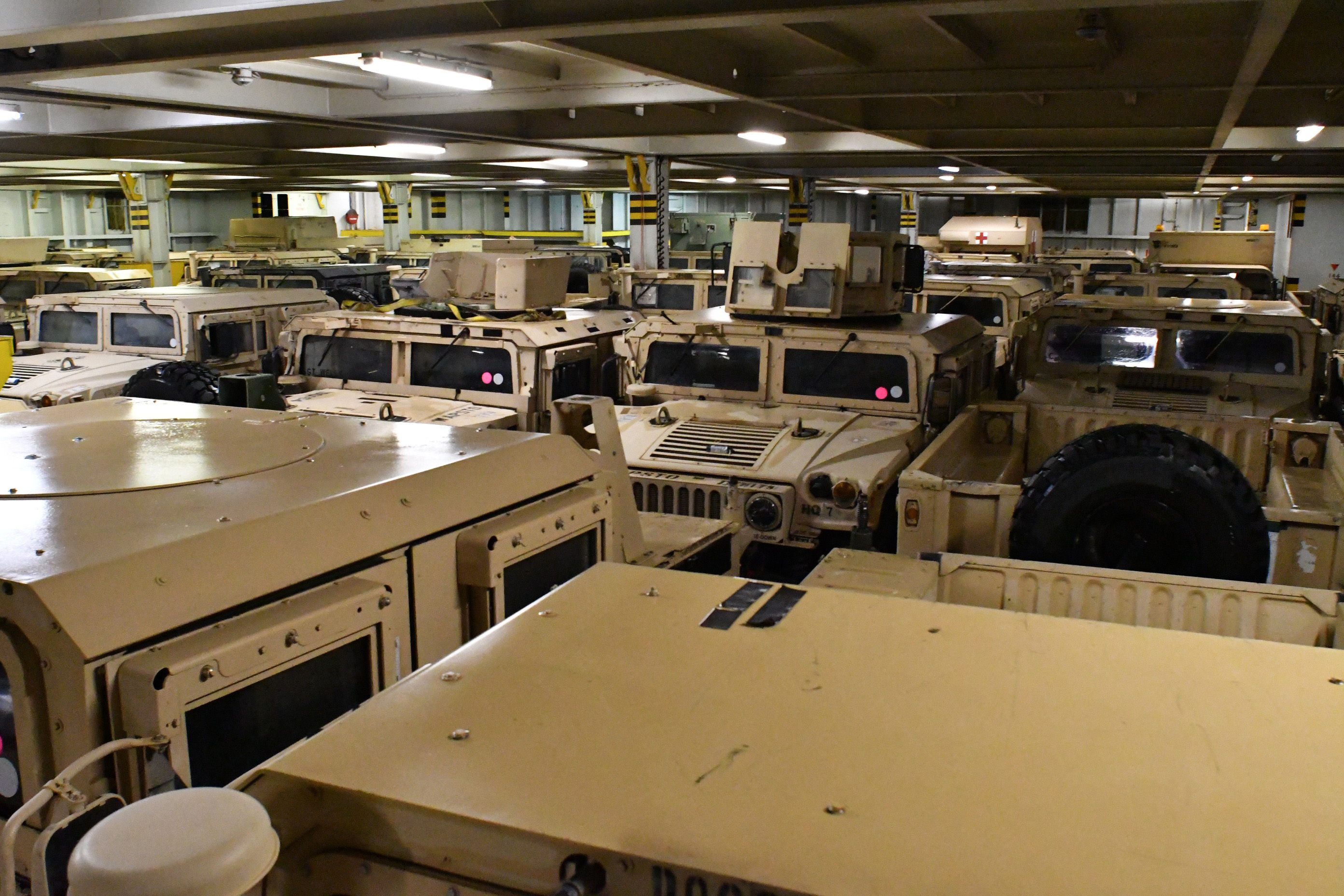 Military vehicles are packed into the M/V Resolve at the Port of Beaumont, bound for Germany in support of DEFENDER-Europe 20 February 20, 2020. Exercises like this ensure the U.S. military will be able to dynamically project force to set the theater by mobilizing and deploying forces, sustaining them in a crisis and redeploying them when their mission is complete. US Army photo.

The Navy is exercising a contested cross-Atlantic convoy operation for the first time since the end of the Cold War, using a carrier strike group to pave the way for sealift ships with a cruiser escort to bring the Army ground equipment for the Defender-Europe 20 exercise.

This convoy operation is allowing U.S. 2nd Fleet, Naval Forces Europe (NAVEUR) and the Military Sealift Command to work command and control (C2) on both sides of the Atlantic to deliver gear by sea – replicating the massive sealift efforts that took place to support the European theater in World War II, and what would have to happen again if the U.S. were to support a major conflict in Europe in the future.

“Defender Europe 20 is the largest deployment of U.S.-based forces in Europe in more than 25 years, and it just seems like it’s a natural place for [U.S. Transportation Command], Military Sealift Command and the U.S. Navy to use this exercise as a venue to demonstrate our commitment to being able to flow strategic forces from the United States into theater to support military operations abroad,” Capt. Andrew Fitzpatrick, the commanding officer of USS Vella Gulf (CG-72), told reporters in a phone call today.

The last time the Navy practiced this kind of operation was 1986, Cmdr. Troy Denison, the director of current operations at 2nd Fleet who helped plan the exercise, said during the call. Vella Gulf and USNS Benavidez (T-AKR-306), a Bob Hope-class roll-on/roll-off vehicle cargo ship operated by MSC, left on the convoy on Thursday, and Denison said that they would face both live and simulated threats once they reached the exercise area at an undisclosed point in the Atlantic. Threats they have to be on the lookout for include air, surface, submarine and cyber threats.

“The Atlantic has changed dramatically over the last 20 years. It’s not what it used to be. The minute ships get underway from Naval Station Norfolk, we treat them as (being in) contested waters now, that’s the new reality,” he told reporters. 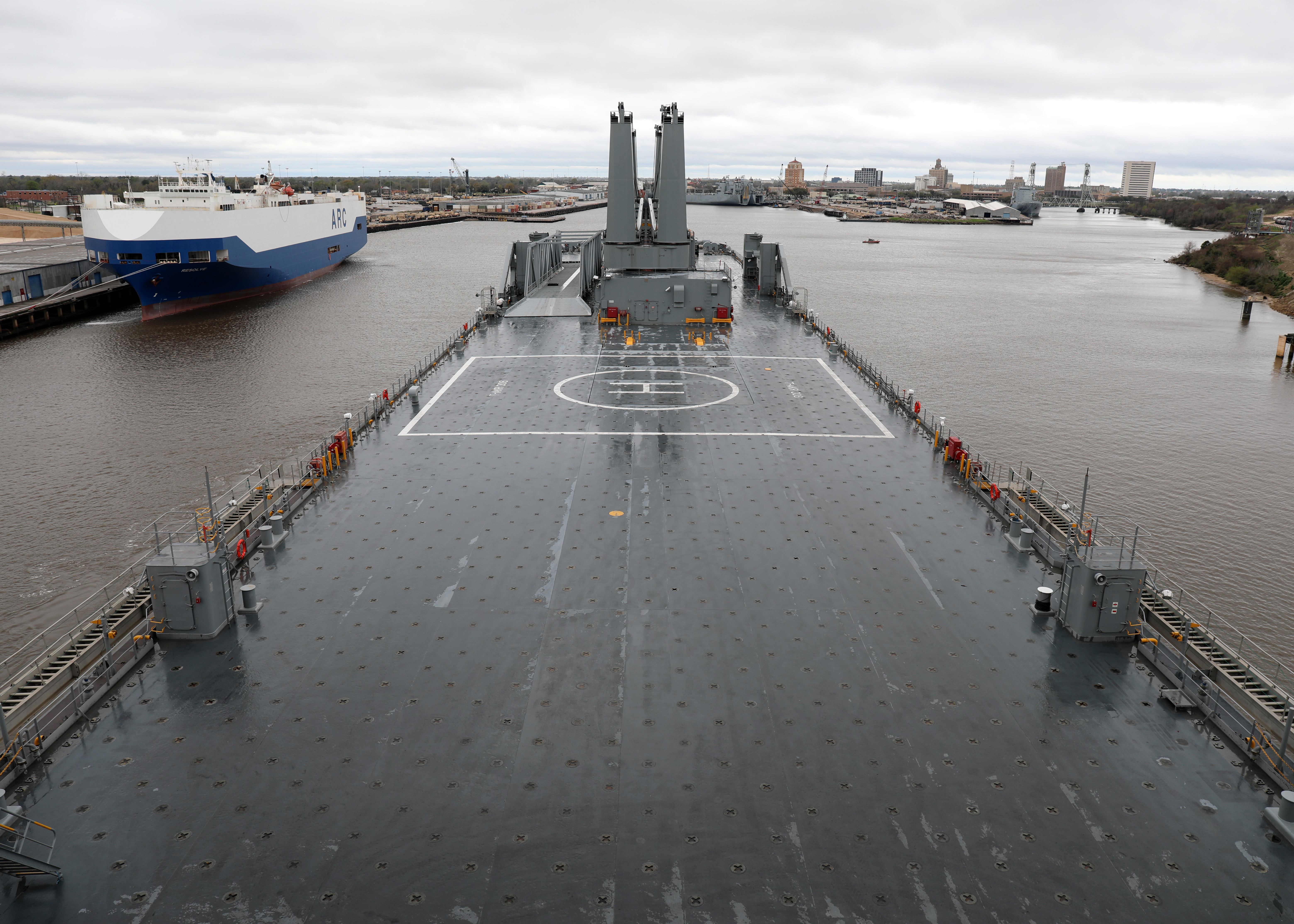 For this exercise, the Dwight D. Eisenhower Carrier Strike Group, which deployed from Naval Station Norfolk, Va., last week for a routine deployment, simulated “sanitizing” the shipping lane on its way across the ocean, looking for live assets posing as adversaries as well as simulated threats piped into the ship’s systems. Though in a real operation the CSG would hopefully take out most of the threats, the live and simulated threats reset after the CSG passed through, meaning Vella Gulf will have to defend itself and Benavidez from whatever comes its way as they move across the Atlantic, Fitzpatrick explained.

“The coordination between NAVEUR, 2nd Fleet, and 6th Fleet are indicative of a seamless Atlantic Ocean. This exercise allows us to sharpen our ability to move critical resources across the Atlantic, from the United States to Europe,” Adm. James Foggo, NAVEUR commander, said in a Navy news release on the exercise.
“As I have said before, logistics is the sixth domain of warfare, and a critical part of any successful operation or exercise. The transatlantic bridge is just as important today for moving troops and military equipment, supplies and material from the United States to Europe as it has been at any point in history.”

Though convoys haven’t been practiced in a couple decades or needed in even more decades, the fact remains that sealift is still the most effective option to surge trucks, weapons, radars and other large goods forward for the Army or Marine Corps if needed, said Kim Harris, a supervisory marine transportation specialist at MSC Atlantic who is responsible for surge sealift, dry cargo and tanker vessel operations in the Atlantic.

“In any sort of contested scenario or wartime scenario, over 90 percent of the combat power, the cargo, that gets from the United States over to the theater of operations is taken by sealift. And that sealift is controlled by the Military Sealift Command, both through its organic assets and contracted commercial assets,” she said. 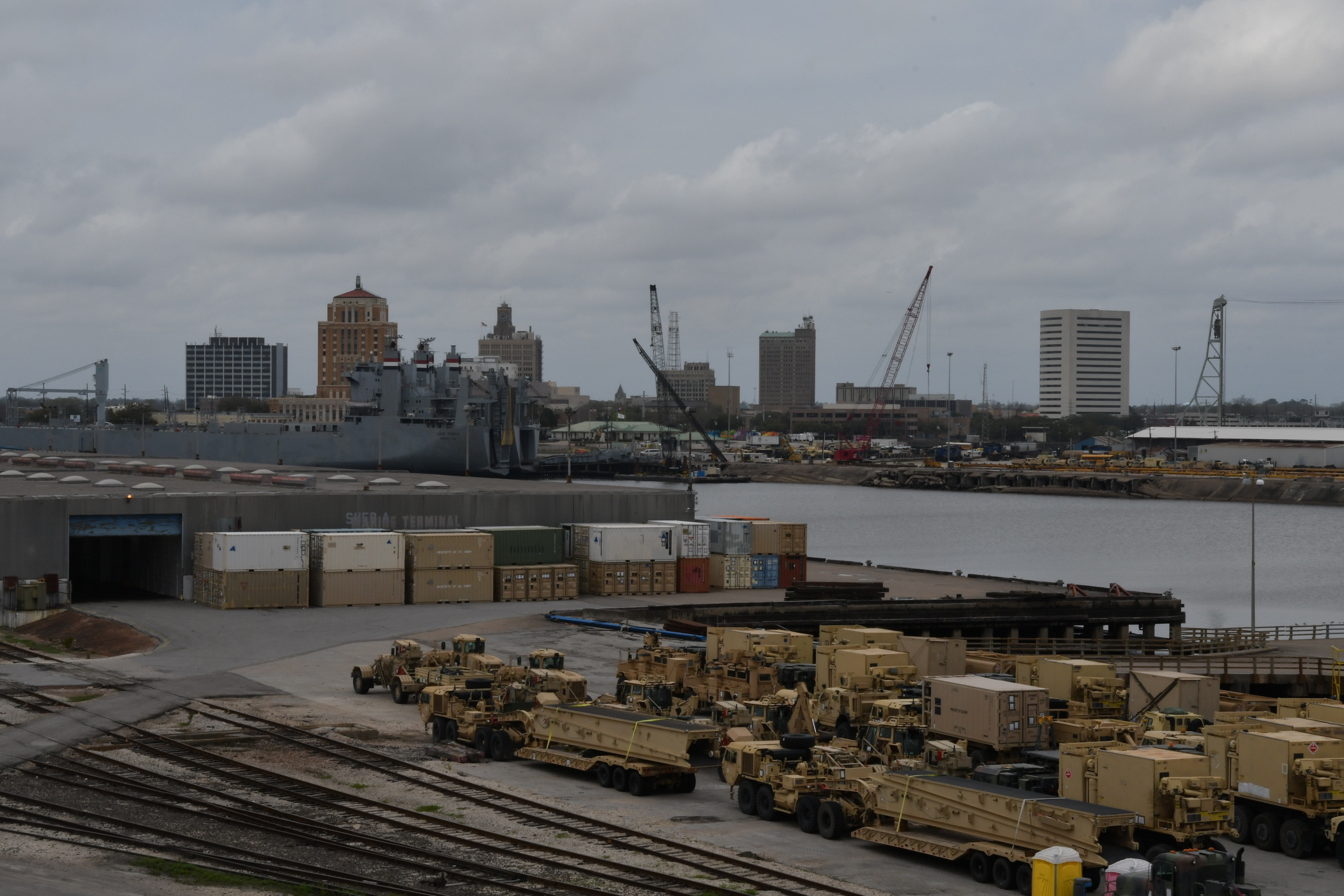 Containers and vehicles await transportation on commercial ships to Europe in support of DEFENDER-Europe 20 February 18, 2020 at the Port of Beaumont, Texas. DEFENDER_Europe 20 will exercise the deployment of a division-size combat-credible force from the United States to Europe, the drawing of equipment and the movement of personnel and equipment across the theater to various training areas. US Army photo.

Over the decades, the Navy’s warships have gained an incredible amount of capability to communicate with nearby ships and aircraft, to sense their surroundings, to understand maritime traffic patterns and more. The aging sealift fleet in MSC and in industry, though, has not had the funding to make such upgrades. A big focus of this convoy exercise is to determine how well 2nd Fleet can command and control the operation across the ocean and how well the convoy can communicate internally and with the receivers of the cargo in European ports.

Capt. Hans Lynch, the commander of MSC Atlantic who was aboard Benavidez during the media call, said many MSC ships have to rely on commercial communications systems – such as iridium phones and networks with much less bandwidth –that are less robust than what the Navy has, sometimes making it a challenge to communicate with a ship sailing right alongside.

His goal for the exercise is to understand “where are the gaps, what systems can we look at for the future, and how we can better C2 these convoys as we go across the Atlantic. So yes, right now it’s relatively fragile infrastructure that we are using to the best of our ability, and so far we think that we’ll probably be able to C2 the force, but there’s a lot more individual effort by our watchstanders than we should normally have” compared to a warship equipped with communications and situational awareness tools to help navigate through a contested waterway.

Lynch said the most obvious metric of success for his force is that the cargo make it to the Army forces in Europe on time, but he said other successes from the exercise include participation in the planning process alongside the Navy to learn from each other and more clearly understand each other’s convoy capabilities, as well as being able to execute the operation and identify technology or other gaps that exist that could hinder a real-world convoy operation.

Fitzpatrick agreed, saying a goal of the cruiser is “working through and identifying challenges not just operating with Navy ships, Military Sealift Command ships and contract ships, but also being able to communicate … so that in the future we can have more streamlined communication, so if we actually have to execute this in a real-time event that we’re better prepared to do that.”